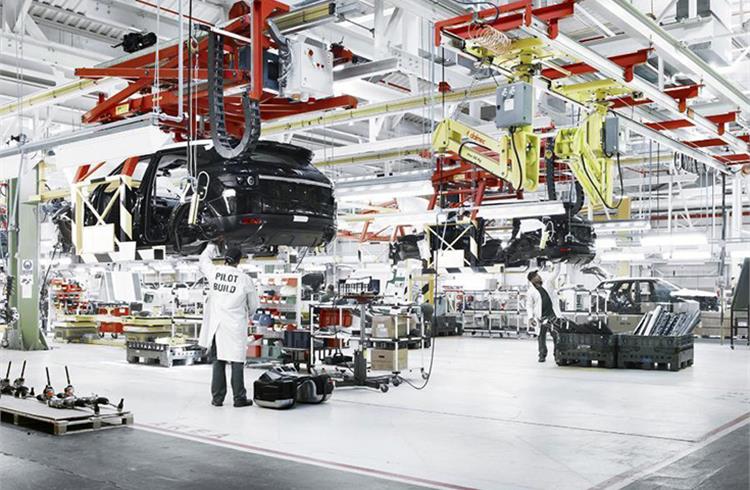 As the shortage of semiconductor processing chips continues to impact the automotive and technology industries, several leading car makers have been forced to close production lines temporarily.

The crisis has been affecting companies for several months now. It stems from increased demand for personal computers, tablets and smartphones at the height of the Covid-19 pandemic, which largely diverted supply away from the automotive sector.

Ford
The factory in Turkey that builds the Ford Transit for the European market will be closed from 19 April to 13 June, with the manufacturer bringing forward a planned summer shutdown, according to Automotive News Europe.

The Focus production line in Saarlouis, Germany has been inactive since late February and is set to remain closed for another 20 days, while closures of varying length will impact Galaxy, Kuga, Mondeo, S-Max and Transit Connect production until 31 July. Closures will also impact the Fiesta and Puma production lines in Germany and Romania respectively, although to a much smaller degree.

Having earlier paused production of its hugely popular F-150 pick-up truck in light of the semiconductor shortage, Ford has also now taken the decision to halt operations at several factories across the US for two weeks from 3 May.

According to The Detroit News, the affected sites are responsible for producing the F-150, Transit, Ford Explorer and Lincoln Aviator for the US, as well as the Mustang for global markets, including Europe and the UK. It's not clear how visible the impact of restricted Mustang production will be in Europe.

The site quotes an internal Ford memo addressed to employees from manufacturing vice-president John Savona: "Ford's North American plants continue to be affected by the global semiconductor shortage – along with auto makers and other industries around the world.

"As you build every vehicle you can for our dealers and customers, our teams behind the scenes are working hard to source additional parts."

Jaguar Land Rover
Jaguar Land Rover (JLR) is pausing operations at two of its largest production facilities for at least a week due to a shortage of semiconductor chips.

The manufacturer's Castle Bromwich and Halewood factories in the UK will implement a "limited period of non-production" from Monday. Operations could restart seven days later, depending on the state of semiconductor supply.

The Solihull facility that builds the Range Rover and Jaguar F-Pace will remain in operation, as will the Land Rover Defender factory in Slovakia and JLR plants in Brazil and China.

A spokesman for the brand told Autocar UK: "Like other automotive manufacturers, we're currently experiencing some Covid-19 [related] supply-chain disruption, including the global availability of semiconductors, which is having an impact on our production schedules and our ability to meet global demand for some of our vehicles.

"As a result, we've adjusted production schedules for certain vehicles, which means that our Castle Bromwich and Halewood manufacturing plants will be operating a limited period of non-production from Monday 26 April. Manufacturing continues at our Solihull plant.

"We're working closely with affected suppliers to resolve the issues and minimise the impact on customer orders wherever possible.”

The semiconductor crisis has been affecting global vehicle production for several months now, following a surge in demand for smartphones, tablets and personal computers at the height of the pandemic. As car manufacturers mothballed production lines due to lockdowns and consumers switched to home working, semiconductor supply was almost wholly diverted to the technology sector, and the trend has yet to be tangibly reversed.

Last month, Autocar UK reported that a number of manufacturers were urgently seeking to overhaul their components supply-chains as a workaround to ensure continued production. Analysis company IHS Markit said at the time that the shortage could cut global production by nearly 700,000 vehicles year-on-year, although the final figure could be even higher.

Mercedes-Benz
Mercedes-Benz parent company Daimler posted a 13% year-on-year sales increase in the first quarter of 2021 but noted the impact of the semiconductor crisis.

"Daimler anticipates that this shortage could further impact sales in the second quarter," it said in a statement, although it added that it expects a recovery in the third and fourth quarters of the year.

Earlier this week, the firm reduced working hours for 18,500 staff in Germany in line with a reduced production capacity, due to the parts shortage, starting from 23 April. Automotive News Europe reports that affected models include the C-Class, EQC and GLC.

Peugeot
Stellantis has confirmed to Reuters that the outgoing Peugeot 308 will see out its production run with an analogue instrument cluster, rather than the digital set-up that was introduced as part of a facelift in 2020.

The hatchback has only a few months left on sale (its successor was revealed last month), and the news organisation quotes a group representative as saying: "It's a nifty and agile way of getting around a real hurdle for car production until the 'chips' crisis ends."

The semiconductors Peugeot has supplied will be largely reserved for more popular and newer models, including the 3008 SUV, which aren't yet set to receive any alterations in light of the shortage.

There hasn't been any suggestion that the new 308 will be delayed or go without its digital i-Cockpit display.

Volkswagen
The Volkswagen Group is expecting the chip shortage to impact second quarter production more severely than the first.

Seat CEO Wayne Griffiths told the Financial Times: "We are being told from the suppliers and within the Volkswagen Group that we need to face considerable challenges in the second quarter, probably more challenging than the first quarter."

Precise predictions have not been revealed, but the VW Group previously said it was expecting a production shortfall of 100,000 vehicles this quarter. According to the FT, the company has warned it does not have the necessary production capacity to compensate for the drop later in the year.

Griffiths told the newspaper that production at Seat's Martorell factory is currently "hand to mouth", and decisions on which cars to produce are based entirely on supply.

Tesla
Tesla as not been immune to the effects of the semiconductor shortage, with CEO Elon Musk acknowledging "some of the most difficult supply chain challenges that we've ever experienced at Tesla".

However, speaking as the company celebrated first-quarter profits of £315 million and record car deliveries in the same period, Musk noted "that particular problem" has subsided.

The firm delivered a record 184,400 cars in the first three months of 2021, despite shutting down production in Fremont, California for two days in February due to unspecified "parts shortages".

It is not completely clear how Tesla managed to minimise the impact of the shortage, but Musk recently tweeted: "Thanks Tesla suppliers for providing us with critical parts", hinting at the establishment of a secure supply line. As reported by Forbes, the company was also likely able to divert limited chip supply to its higher-volume Model 3 and Model Y cars, with all deliveries of the Model S and Model X during the period coming from dealer stock.