The 10.9m long electric double deckers would use BYD’s Iron-Phosphate batteries with chargers managed by BYD. Their 23 single deck electric buses to roll out in the city by mid-2018. 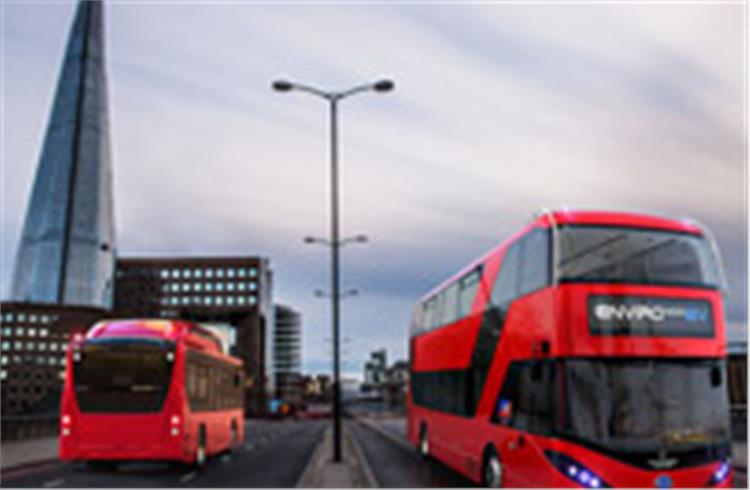 China-based BYD and UK-based Alexander Dennis (ADL) are to supply 37 double-decker buses called the BYD ADL Enviro400EV buses to the City of London. The buses would enter service with Transport for London (TfL) operator Metroline in the second quarter of 2019.

Designed at ADL’s facility in Scotland and BYD’s R&D centre in Shenzhen, China, the finished buses will be assembled in Britain by ADL, the same process that is adapted for other BYD ADL joint products.

The 10.9-metre-long electric double-deckers will be built to TfL’s comprehensive specification. They will use BYD’s Iron-Phosphate battery technology. The buses, based at Metroline’s Holloway Garage in north London, will serve the intensive Route 43 that runs through the heart of the City of London from London Bridge in the south to Friern Barnet in the north.

The chargers, managed by BYD’s smart charging battery management system, will not only serve the new double deckers but also Metroline’s fleet of 23 10.8m, single-deck BYD ADL Enviro200EV buses when they enter service in the middle of this year.

In October 2015, BYD supplied Metroline with five Chinese-built double-deckers, which they claim are the first in the world.

Isbrand Ho, managing director, BYD Europe said, “With 6,800 double deckers on London streets, their full electrification is the key to making the maximum beneficial impact on air quality for Londoners."

Colin Robertson, ADL chief executive said, "So far the Enviro200EV single decks have delivered in excess of 1.5 million miles of zero-emission transport in the UK. This new contract for double decks takes the BYD ADL collaboration to a whole new level in every sense."