Long-term supply agreement with cellcentric for electric air compressors with integrated power electronics, use in fuel-cell systems for heavy trucks and other on- and off-highway applications 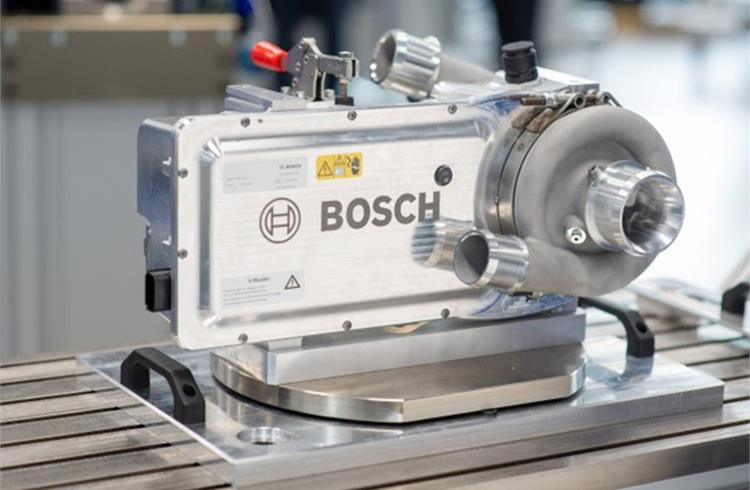 Fuel cells are finding their way onto the roads around the world. Bosch has won a major order for electric air compressors with integrated power electronics. These compressors govern the fuel-cell system’s oxygen supply.

Bosch has signed a long-term agreement with cellcentric, the 50:50 joint venture between Daimler Truck and Volvo Group, to supply this high-tech component. Like Bosch, the joint venture aims to become a leading global manufacturer of fuel-cell systems and thus to help make transportation climate neutral and sustainable by 2050. The air compressor will be part of the cellcentric fuel-cell system that will feature in heavy trucks and stationary applications in the future. Large-scale production is set to begin from around the middle of the decade.

Fuel cells make CVs climate neutral
In fuel cells, hydrogen reacts with atmospheric oxygen to produce electrical energy as well as water and heat. Running a fuel-cell powertrain on hydrogen that is green – in other words, produced using renewable energy – makes the vehicle climate neutral. As the electric air compressor supplies the required amount of filtered air, it is one of the core components of a fuel-cell system.

“Bosch is devoting a huge effort to developing this component. For example, we have 15 cross-divisional teams working to commercialize the electric air compressor,” says Dr. Uwe Gackstatter, president of the Bosch Powertrain Solutions division.

Bosch offers the air compressor in two power classes – 20 and 30 kilowatts. The 30-kilowatt class is rated for voltages from 450 to 850 volts, while the 20-kilowatt class is rated for either 250–450 volts or 450–850 volts. The compressor wheel reaches speeds of more than 100,000 rpm. “The combination of a high-speed electric motor with integrated power electronics enables easy system integration at competitive manufacturing costs,” Gackstatter says. In addition, the silicon carbide semiconductors used in Bosch power electronics make this powerful component particularly efficient. It is features such as these that cellcentric was looking for.

Bosch believes that hydrogen has a bright future as an energy carrier, and is making considerable upfront investments in this area. From 2021 to 2024, the company plans to invest around 600 million euros in mobile fuel-cell applications and a further 400 million euros in stationary ones for the generation of electricity and heat. The portfolio for vehicles ranges from individual sensors to core components such as the electric air compressor and the stack to the complete fuel-cell module.