Continental continues to see sales improving in the second half of the year. 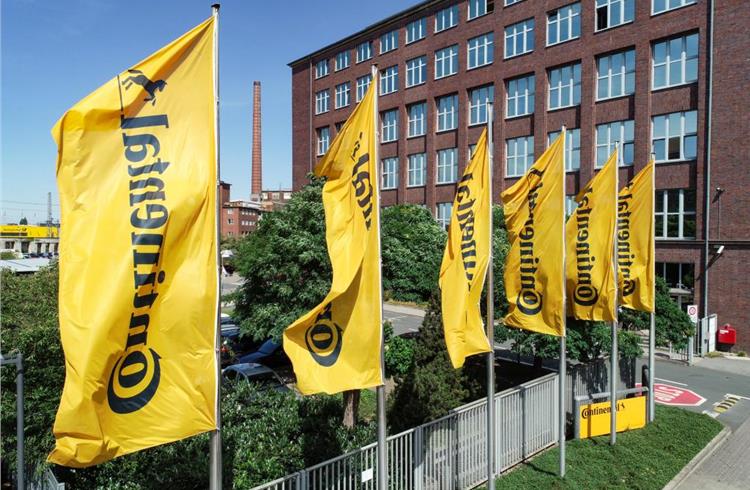 German Tier 1, Continental has managed a positive start to the business year, thanks to its technology portfolio, the company says it has been able to distance itself from the substantial downward trend on the market. For Q1 CY2019, the company reported sales revenue of 11.0 billion euro (Rs 85,998 crore), which it says were on par with the prior-year level.

The adjusted EBIT margin was 8.1 percent (adjusted EBIT: 884 million euro or Rs 6,911 crore). In the first three months of 2019, the company says while the global automobile production was down by more than 6 percent YoY, in contrast the technology company’s organic growth (before changes in the scope of consolidation and exchange-rate effects) was down by only 2 percent. In addition Continental's strong market position, this was also due to exchange-rate effects which totalled 186 million euro (Rs 1,454 crore) in Q1 CY2019, attributable primarily to the appreciation of the U.S. dollar in relation to the euro.

“Thanks to our strong market position, we have kept our sales stable in a clearly sluggish market environment. Our stricter cost discipline contributed to our solid results,” said Dr Elmar Degenhart, CEO, upon the publication of the quarterly figures in Hanover on Thursday.

Continental continues to expect a market upturn in the second half of the year and is thus maintaining its annual guidance issued at the beginning of January. In Q1 CY2019 the financial result the net income attributable to the shareholders of the parent was 575 million euro (Rs 4,495 crore), down 22 percent YoY (PY: 738 million euro or Rs 5,770 crore).

Continental to continue investing in mobility of future
Commenting on the result, Wolfgang Schafer, CFO, Continental said: “The start to the new fiscal year was challenging, as expected. We did, however, already start to heighten our cost discipline last year. We are benefiting from this now.”

During the first quarter the company's capital expenditure for R&D and for property, plant and equipment, and software came to over 1.5 billion euro (Rs 11,727 crore). “Continental is continuing to invest heavily in the mobility of the future, and thus in its future business success,” explained Schafer.

The company says besides the lower sales and results in the first quarter, the decrease was also caused by the necessary investments in capacities and technology development. For the year as a whole, the German company confirms that it expects to generate a cash inflow of around 1.4 billion euro (Rs 10,945 crore) to 1.6 billion euro (Rs 12,508 crore) before acquisitions and before the effects of transforming its powertrain business into an independent group of legal entities. This assumption is based upon the normal seasonal nature of free cash flow. Cash inflow is usually at its peak at the end of a year, when payments are received in the winter tyre business and when automotive manufacturers make reimbursements for development expenses.

Electronics and Rubber business to grow
In terms of segment wise revenue, the automotive group reported sales revenue of 6.7 billion euro (Rs 52,380 crore), down 1.8 percent. “In the first quarter, fewer vehicles were produced in all of the world’s major sales markets, in total over 1.5 million fewer passenger cars and light commercial vehicles than in the year before. We cannot escape the effects of such a sluggish market environment,” said Schafer, commenting on the Automotive Group’s results.

Despite the weak market environment at present, Continental says the need for electronics in the car is growing steadily, and the best example is advanced driver assistance systems (ADAS). On average, the car needs about 18-sensors for partially automated driving, and in the case of fully automated or autonomous driving, this number increases to 30. In each of the last two years, the technology company received orders totalling 3 billion euro (Rs 23,454 crore) on average in this area.

In the first three months, the Rubber Group generated sales of about 4.4 billion euro, a 3.8 percent increase in sales (Rs 34,399 crore). The tyre business, and in particular the sales volumes in the commercial-vehicle tyres business, experienced a positive trend, with growth of 6 percent. The ContiTech division experienced growth above all in areas that supply to industry, such as the business with conveyor belts and industrial hoses.

At the end of the first quarter, Continental’s global workforce comprised a total of 245,686 employees. The technology company employs around 49,000 engineers worldwide, more than a third of whom have a software background. In the company’s own global software academy, more than 2,000 employees will receive further training in 2019 alone. By the end of 2022, the number of software and IT experts is expected to grow from present 19,000 to 25,000.