'The Vitara Brezza will be the best-in-segment'

An upbeat C V Raman, Maruti Suzuki's ED (engineering) and the chief engineer of the Vitara Brezza, shares the key objectives of developing the Vitara Brezza and why it is bullish about the model, the first sub-4-metre SUV in India. 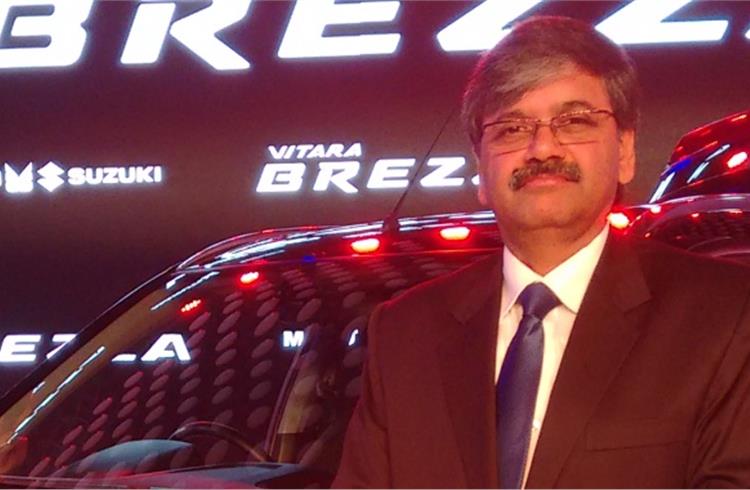 An upbeat C V Raman, Maruti Suzuki's executive director (engineering) and the chief engineer of the Vitara Brezza, shares with Sumantra B Barooah the key objectives of developing the Vitara Brezza and why Maruti Suzuki is very bullish about the model, which is its first sub-4-metre SUV in India.

What are the three key objectives you set out to meet with the Vitara Brezza project?

Very clearly, it had to be for the Indian market and so the design had to be something to India’s taste. Secondly, it was for those who want to upgrade from a hatchback. Thus, it had to be for someone who is already in the Maruti fold, wants an SUV that sporty, aggressive and bold. That's what we have created. Apart from the design, it had to have all the comfort, convenience and safety packed into that. Because that's where the customer today sees value.

So, it will be for someone who has been driving a Wagon R, or a Celerio maybe?

The SUV market has been growing at a 30% CAGR over the past 4 years. There are a lot of people who want to upgrade to an SUV and we wanted to do an SUV which was something which is very dynamic, very sporty and  aggressive. That's what we did and we built it on a global Suzuki engine platform and used the Suzuki global development process and core technologies. That's what you see today.

Vitara is part of the branding of your vehicle. Any part(s) from the Suzuki Vitara's bin?

No, nothing at all. It is totally different except for the platform and engine which is common. It is the C platform of Suzuki.

What are the key highlights in terms of lightweighting or in any other area of engineering?

One of the key things Maruti Suzuki is known for is fuel efficiency, and we will not disappoint with this model either. We have done a lot of things in terms of technology in order to ensure that the customer gets very good fuel efficiency.

In any new project, the focus is to be 'best-in-segment' in at least one or two areas. What would that be for the Vitara Brezza?

We will be best-in-segment.

Will India be the sole production base for the Vitara Brezza, like the Baleno?

Right now the target is the Indian market. If there's a requirement in the future, then we will definitely.

How versatile is the platform? Is it flexible enough to have a 7-seater on it, perhaps?

We will think about it after we see the response to the Brezza. Everything is possible!

The challenge for petrol SUVs is to match the driving dynamics of a diesel SUV.

That's what is important. That is why we are finding the right engine to suit the character of this vehicle.

Will you use GDI technology for the Vitara Brezza petrol?

We will see. Options are available. We are studying that.