The Nexon comes with aggressive introductory pricing – it starts at Rs 585,000 for the base XE petrol variant and goes up to Rs 944,900 (ex-showroom, Delhi) for the top-end diesel XZ+ trim.

By Nilesh Wadhwa and Mayank Dhingra 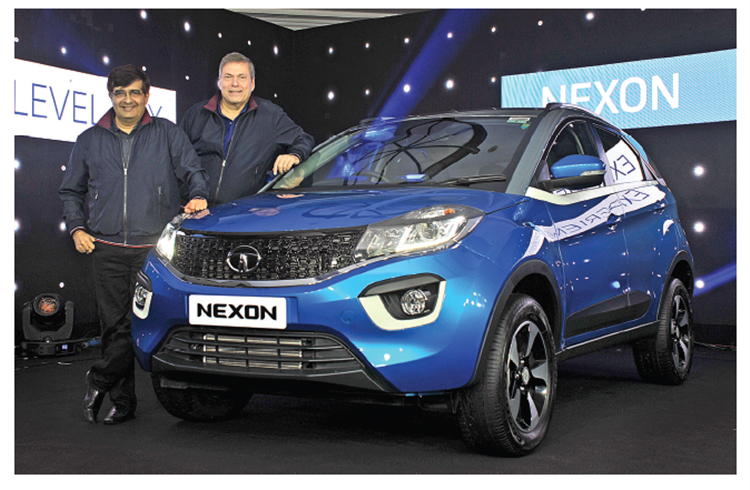 Earlier this year, Tata Motors embarked on an aggressive turnaround plan to stem the flow of red ink in its passenger vehicle and commercial vehicle business. Its three-pronged ‘attack’ game-plan – cost control, filling of product gaps and comprehensive supply chain management – also aims to regain 5 percent market share. The bigger goal though is to attain No. 3 position in the Indian PV market. While the Tiago hatchback, Tigor sedan and Hexa crossover have helped Tata drive into PV growth mode, the new charge is expected to come from its latest product – the just-launched Nexon, its first-ever compact SUV.

Having missed out on the compact SUV boom all this while, the snazzy looking and aggressively priced Nexon is Tata’s assault weapon in the segment which sees the Maruti Vitara Brezza as the well-entrenched leader. 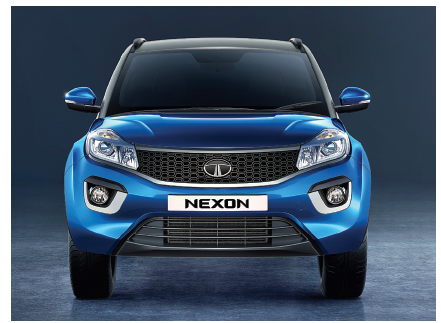 The Nexon, which was first showcased at the 2016 Auto Expo, retains critical design elements from its concept through to the production model. The Nexon has an unladen ground clearance of 209mm and comes shod with 205 section tyres, mounted on 16-inch diamond cut alloy rims on the top trim.

On the fuel efficiency front, the diesel variant delivers 21.5kpl while the petrol gives 17kpl, which means it is thirstier than its rivals. 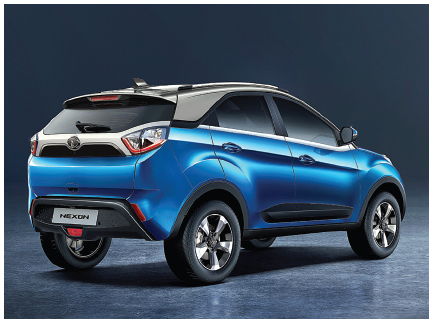 Tata Motors has plonked in two indigenously developed engines into the Nexon, with a 1.2-litre three-cylinder turbocharged petrol from its Revotron series, which is rated to develop 110bhp of power and 170Nm of peak torque.

While the petrol motor made its first appearance in the Tata Zest, that was launched in 2014, the 1.5- litre four-cylinder diesel unit is a completely new engine that produces 110bhp of power and 260Nm of peak torque. Both engines come with a mated 6-speed manual transmission, along with Tata planning to introduce the AMT option by Q1 of CY2018. The crossover offers three ‘Multi-Drive’ modes, which include Economy, City and Sport driving modes to alter driving characteristics. 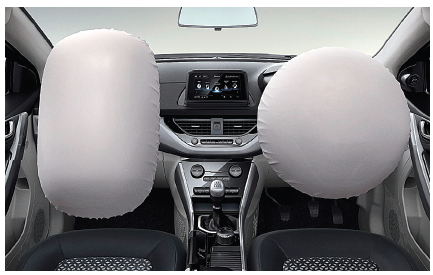 There’s plenty of kit on the Nexon, with even the base variant getting dual front airbags, ABS with EBD, reach and rake steering adjust, multiple drive modes (Eco, City, Sport), umbrella holders in the doors and a folding rear seat. The Nexon is the first in its class to feature multiple drive modes for both engine options. There are ISOFIX top anchors and tethers at the rear seats as the standard safety kit on offer, and the body shell of the crossover has been designed to absorb maximum impact in a situation of a crash. 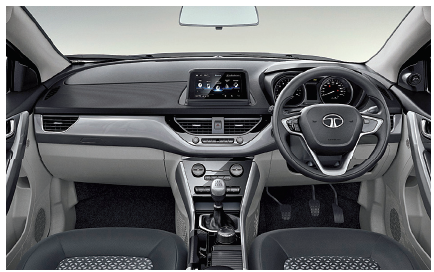 At the unveiling of the Nexon in Mumbai on September 21, Guenter Butschek, CEO and MD, Tata Motors, said: "Our passenger vehicle market is dynamic. The fast-moving generation has clear preferences in terms of design and style. The Nexon is the result of our intent to break away from the conventional approach of segmentation in its discreet forms and fulfilling a larger set of milieus. We need to get the PV business back to profitability by gaining market share by entering new product segments. With the launch of the Nexon, we aim to connect with the aspiration of our customers and mark our entry into the growing compact SUV segment.”

Mayank Pareek, president – Passenger Vehicle Business Unit, Tata Motors, said, "Our focus is to introduce products that not only enhance the brand, but simultaneously align well with the rising aspirations of customer segments. As part of the aggressive turnaround strategy, we have renewed focus on filling in product gaps and tapping the white spaces that will emerge. Conceptualised as a lifestyle SUV for young progressive individuals, the Nexon is the culmination of this radical shift in thinking and will further expand Tata Motors’ addressable market."

He further explained the company’s future aim, “Our bigger aim is to cover 95 percent of the market product segments by 2020,” he added. The company is also witnessing a shift in new owner profiles which has shifted to be around 81 percent individual buyers, contrary to the majority of Tata car owners being fleet operators.

SCALING UP THE DEALER NETWORK
Tata Motors aims to broaden geographically and expand its reach across the country, with a proper focus on the rural market as well. At the end of March 2017, its network stood at 650 dealership outlets. It is now planning to expand this to 745 showrooms in FY2018 and to more than 1,200 showrooms by 2021, including a host of contemporary virtual showrooms.

Pareek believes that with the launch of the Nexon, Tata Motors has a late-mover advantage in the category, which gave it a liberty where it could learn from the mistakes of others and formulate its product better. He further added that the company’s approach towards introducing AMT in each product is future-driven and in the next five years, the industry will witness every second car sold equipped with AMT.”

For Tata Motors, which is seeing a smart uptick in its PV sales and having finally made the connection with the booming compact SUV market, the Nexon has come at the right time. For the company, which currently has a PV market share of 5.51 percent, the Nexon could be the sales accelerator it always needed.

Inteview with Mayank Pareek: The Tata Nexon is far superior to any existing product.’

This feature was first published in the October 1, 2017 print edition of Autocar Professional