Tata Motors puts its best foot forward with the Zica

The upcoming Zica hatchback reflects a new design, engineering direction for Tata Motors. But does it have what it takes to draw the buyer? Sumantra B Barooah finds out. 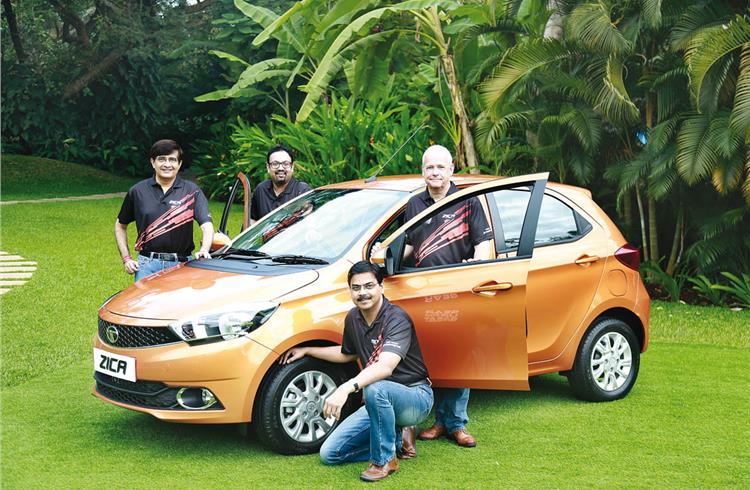 It was in June 2013 that Tata Motors announced its Horizonext strategy to turn around its struggling passenger vehicle business. Two-and-a-half years later, the first fully new product in the form of the Zica is ready to hit the market.

The work on the Zica (project name Kite) began in 2012. Look closely and you soon realise Tata Motors has taken a completely new design approach. Design head Pratap Bose says the Zica marks the beginning of a new design philosophy. The car has a sculpted look with sharp lines that run around the body and a redesigned three-dimensional Tata logo. Though design appeal is subjective, it is likely that most people would rate the Zica as better designed than previous Tata cars. It is the first Tata car which has been fully designed in-house with inputs from the company’s design centres in Pune, UK and Italy. The interior has an understated, premium feel. No beige here. The Zica gets a black-and-grey dual-tone dashboard. The quality of the plastics, some of which are textured, is quite good.

On the fit and finish parameter too, Tata Motors has evolved significantly. Girish Wagh, Tata Motors’ senior VP, says this is because all components have undergone stringent tests for environmental ageing, perceived quality and BSM (buzz, squeak and rattle). Like many other new models, the Zica offers multiple storage spaces (22). It offers a 240-litre boot space with hooks on either side to carry small shopping bags (up to 3kg).

New ‘future-proof’ engine strategy
Along with its design, the engine options are the highlights of the Zica. A set of new engines – a 1.05-litre 69.4bhp diesel branded as ‘Revotorq’ and a 1.2-litre 83.83bhp petrol in the ‘Revotron’ series will power the compact car. These are also the first set of three-cylinder engines from Tata Motors and reflect the carmaker’s powertrain downsizing strategy to offer better fuel efficiency and meet future emission norms. The new engine architecture is capable of meeting BS VI norms “and beyond”. 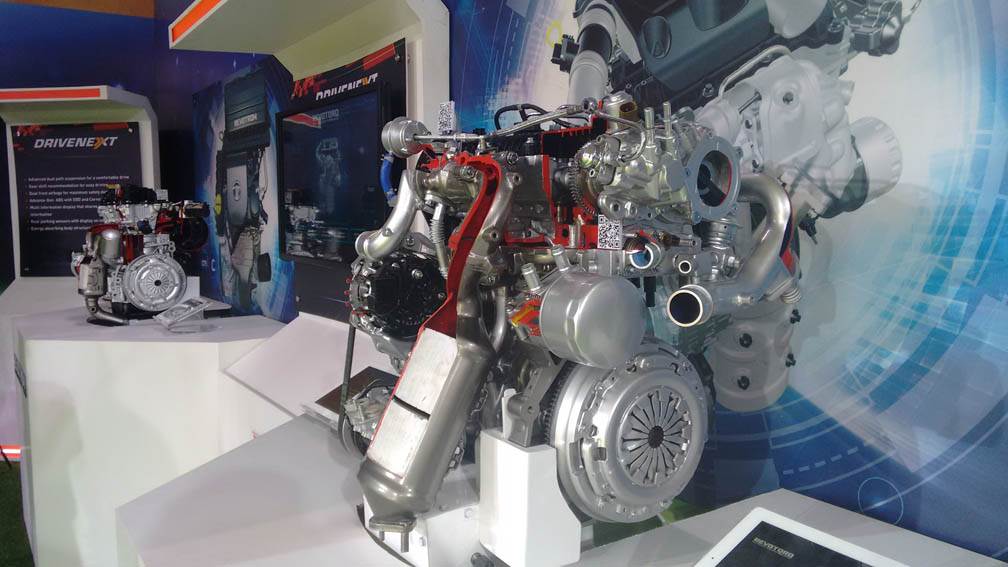 The diesel engine promises the highest torque in the segment with a figure of 140 Nm at 1800-3000rpm. The engine comes with a turbocharger, electronic throttle control and optimised compression ratio aimed at flat torque delivery and better driveability. A balancer shaft (not there in the petrol engine) is used to reduce engine vibrations. Along with fuel efficiency, Tata engineers have worked on improving life of the timing belt, auxiliary belt and extend intervals for oil and fuel filter change to offer low cost of ownership.

After driving both cars, it is clear that the engineers have done a good job in the area of ride and handling with the use of dual path suspension. However, more insulation from the noise and vibration, typical of a three-cylinder engine, would have made the drive more enjoyable. Like the Zest and Bolt, the Zica also offers multi-drive modes. It offers two modes (City and Eco), instead of three in the other cars.

The Zica is 3746mm long and 1647mm wide with a wheelbase of 2400mm. The track at the rear is extended to the maximum to give the car a sporty stance. The rear fenders have been pinched out a bit to cover the wheels as mandatory under regulations. Small ‘winglets’ have been added on both sides of the spoiler to enhance air flow around the car.

A team of up to 250 engineers worked on the Zica project. The access to technology at Jaguar Land Rover also helped, especially to improve perceived quality, surface finish and validation of the car. The Zica is also the first Tata car to be validated digitally to a great extent. “Around 60-65 percent of the product is validated digitally before we built the prototype. It pays off massively in terms of the focus you can bring in the quality of the way the car comes together,” Dr Timothy Leverton, president and head, advanced and product engineering, Tata Motors, told Autocar Professional.

The Zica, which is set to be launched on January 20, 2016, comes equipped with safety features like driver and front passenger airbags, speed-sensing door locks and an engine immobiliser, plus ABS and EBD.

Another highlight is its infotainment system. Audi equipment maker Harman’s association with Tata Motors extends to this hatchback, where it has fitted a system with four speakers and four tweeters. Under Tata’s ConnectNext approach, the Zica offers turn-by-turn navigation when connected to a smartphone through Bluetooth. A ‘Juke-Car’ app enables all occupants of the car to add songs in the playlist for the car’s system to play.

After spending a few hours with the Zica, one can say that Tata Motors has put in its best efforts to build a capable car that will have the responsibility to play a key role to change the company’s fortune in the car market. Now it depends on the Zica’s variants and pricing strategy as well as the aftersales support that will determine its appeal to customers. 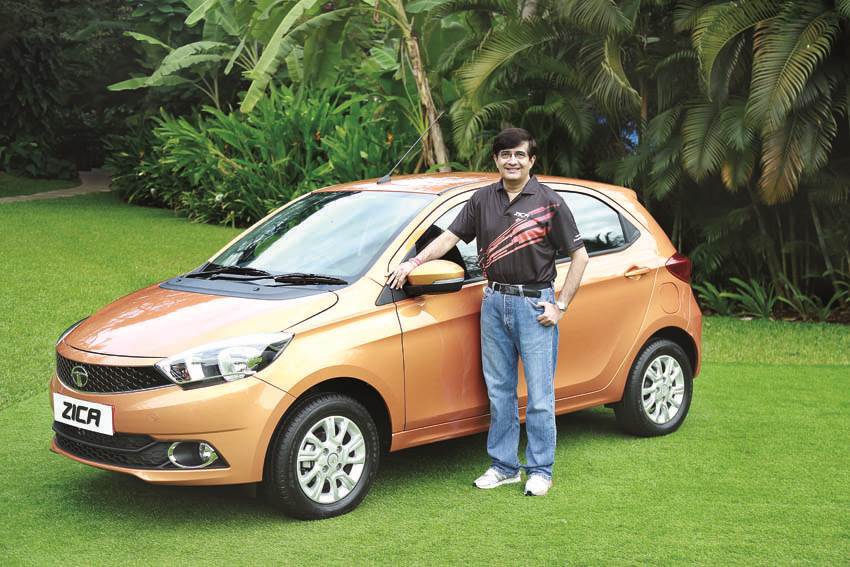 The Zica starts a new direction for Tata Motors, doesn’t it?
With the Zica we are demonstrating our audacity of hope, what we’re capable of. Zica is a completely new platform with two completely new powertrains, which will be our future powertrains.

It is a departure from our design philosophy to become more contemporary and it is also a car that’s extremely feature-loaded. This is a fresh beginning.

What steps are you taking to ensure that Tata cars’ brand equity improves?
Since January, I’ve been meeting customers to understand two things — ‘What the customer thinks Tata Motors is’, and ‘What they it want it to be’. People associate Tata with trust and pioneering. What they also want it to be is that it should become ‘cool’. That has been our endeavour. People said that a ‘cool’ person/brand is very accomplished, very confident (from within) but also humble. They are generally underdogs, but they turn it around. This is what people said build into Tata Motors.

Then we came to the conclusion that we need a celebrity to really catch up on time. Surprisingly, people don’t find cricket cool but it is popular as with Bollywood, where every Friday, coolness changes. Soccer is the new cool, which is something we corroborated with the data.

When we looked around, Lionel Messi fitted the bill to the T. He is a person who was born into a very humble family, with limited means, but he overcame all that by sheer hard work and commitment. And, in this success, he’s never left his humility. So we started the ‘Made of Great’ campaign.

Similarly, we have gone through adverse times but know that we have the wherewithal within ourselves and that we can do it. But it is a long-term process.

Some earlier high-profile celebrity associations like Amitabh Bachchan-Maruti Versa, Sachin Tendulkar-Fiat Palio didn’t click. What gives you the confidence?
What a celebrity does, by the power of association of your product with that brand, is that he brings you into the consideration set. He drives people to the showroom. After that, if your product doesn’t meet that promise, then nothing can be done. The customer is the most intelligent person and he reads through what you’re saying.

The customer should feel reassured because a car is one of the biggest investments in life. Luckily, we have the Tata brand name that people trust. We have to justify that trust.

In terms of the market performance, do you see the curve going up?
Certainly. Even this year, despite having no completely new model, between April-September, we grew by 14 percent while the industry grew by 6.8 percent. November was bad but that’s a hiccup. Now when the Zica comes, every vehicle I sell will be incremental. I guess we will be outperforming the industry this year.

Why didn’t the Bolt receive a good response?
We knew that this is a very good product but it has a very strong linkage to earlier ones. Perhaps, the customer wanted a new product. But it was our preparation for the Zica and the future products. The good news is that we witnessed a huge increase in showroom footfalls.

Secondly, this was also to see whether people accept a petrol engine, introduced by us after a long time. It felt nice to know that 60-odd percent Bolt buyers bought the petrol variant. While I wish the numbers were better, our learnings with the Bolt will reflect in the Zica.

Why do you think the Zest wasn’t able to sustain its initial sales performance?
The Zest will reach there again. You’ll see significant improvement.