Volkswagen’s No. 1 master depot at Kassel, Germany, permanently stores 460,000 replacement parts for vehicles and complete ranges of workshop equipment for service operations in a roofed area of one square kilometre. 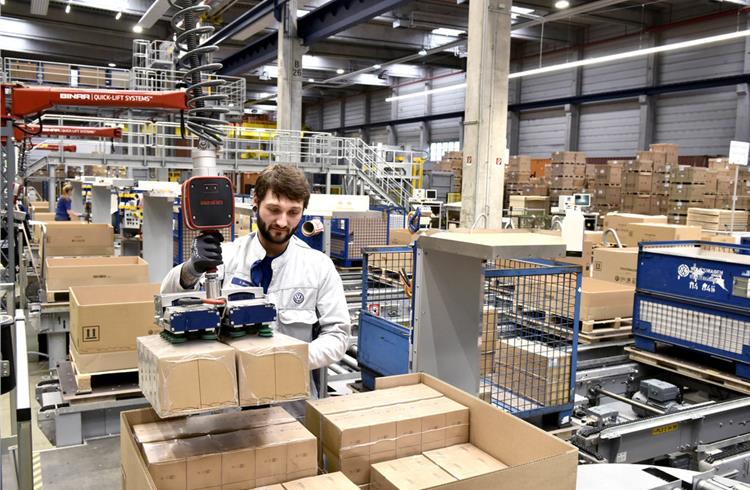 More than 90 million vehicles from all brands of the Volkswagen Group populate the roads in six of the seven continents. 23,500 service centres and partners worldwide handle 300,000 workshop visits per day. Volkswagen says it guarantees the supply of replacement parts for at least 15 years after production of a model has ended. In Europe, no other manufacturer has such a close-knit service network. And if needed, out-of-stock replacement parts can be delivered within 24 hours – to almost any corner of the earth.

At the heart of this unique logistics chain are 19 so-called master depots. They receive direct deliveries of 1.63 million different parts from approximately 6,000 companies as well as factories in the Group and then, in turn, ensure that the 135 regional depots throughout the world are supplied with parts. The undisputed number one of these master depots is in the middle of Germany. In Kassel, around 460,000 replacement parts for vehicles and complete ranges of workshop equipment for service operations are permanently stored in a roofed area of one square kilometre. Fifty percent of the value of the goods sold by the brands Volkswagen, Audi and Volkswagen Commercial Vehicles is handled by this depot alone. Almost 2,000 employees work in three shifts around the clock to ensure that supplies are delivered without a hitch.

The sea freight volume alone has grown by a good 50% over the last five years, which means that more and more parts are being removed from their cage pallets and repacked into overseas shipping containers to be shipped abroad. 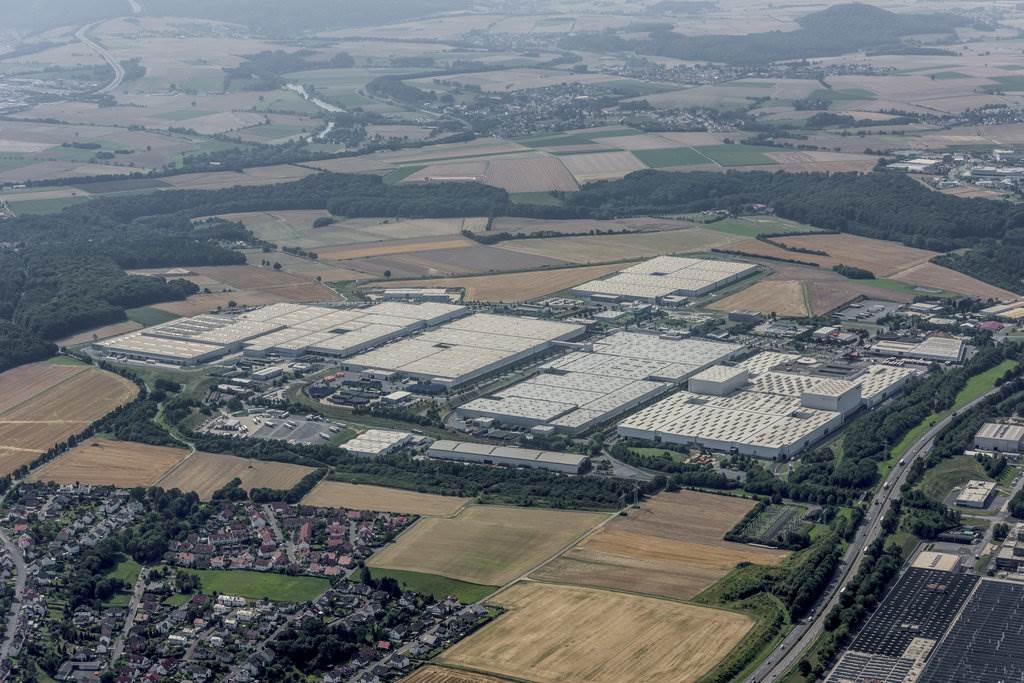 The Kassel Master Depot: one square kilometre of Volkswagen.

At workshops, the employees developed ergonomic repacking stations and simultaneously significantly increased the degree of automation in the process. The new machine, which cost €9 million (Rs 70 crores), consists of a conveyor system of a total of 550 metres with 680 drive motors. The investment was able to improve productivity by up to 40 percent – and also significantly shortened travel distances for the forklifts. From left: Holger Batz (Head of Warehouse and Transport Logistics) and Claus Wriebe (Head of the Kassel Depot)

The head of the Kassel Depot, Claus Wriebe, has every reason to be proud: “The highlight of this new facility is that customers receive their order five days faster” he reported. This also has positive effects on stocks. Wriebe added “There is no other facility like this worldwide.” 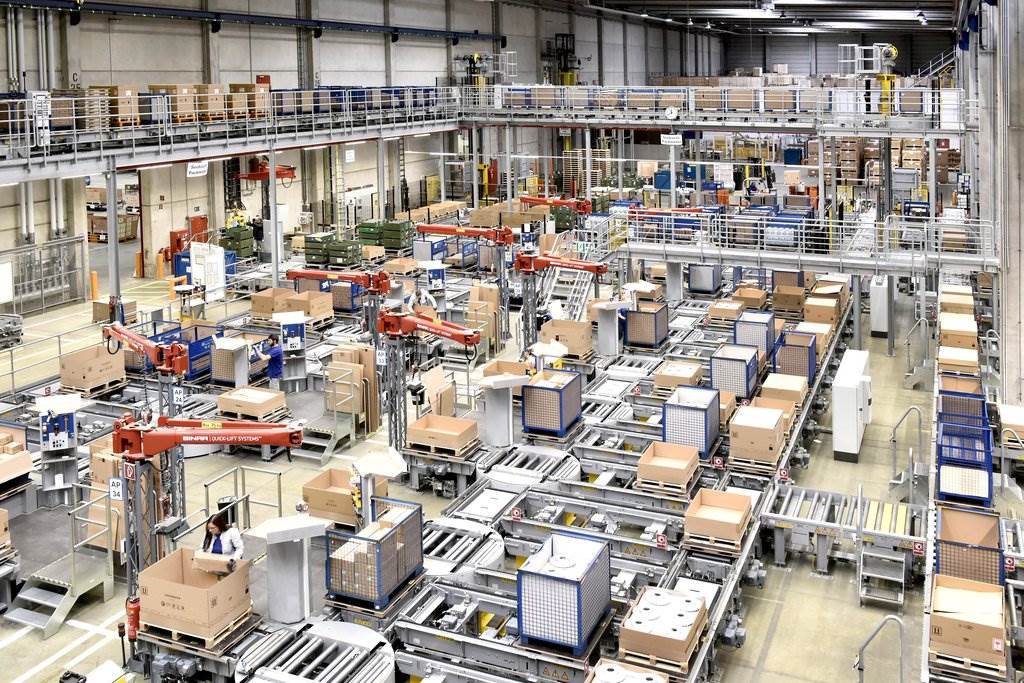 A peek behind the scenes: outgoing goods operations for sea freight.

Here, in four consecutive steps, the ordered goods are repacked into sea freight boxes. First, in a preparatory step, an employee chooses a box of the right size. Next, the box and the cage pallet go into a buffer storage area and are automatically brought to the next available repacking station. 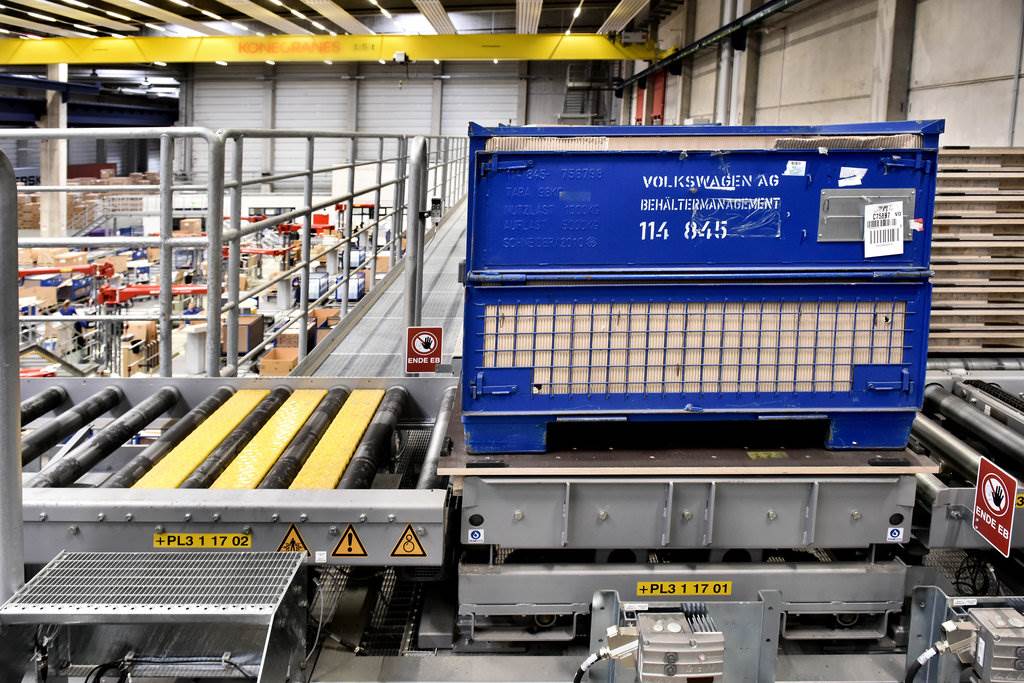 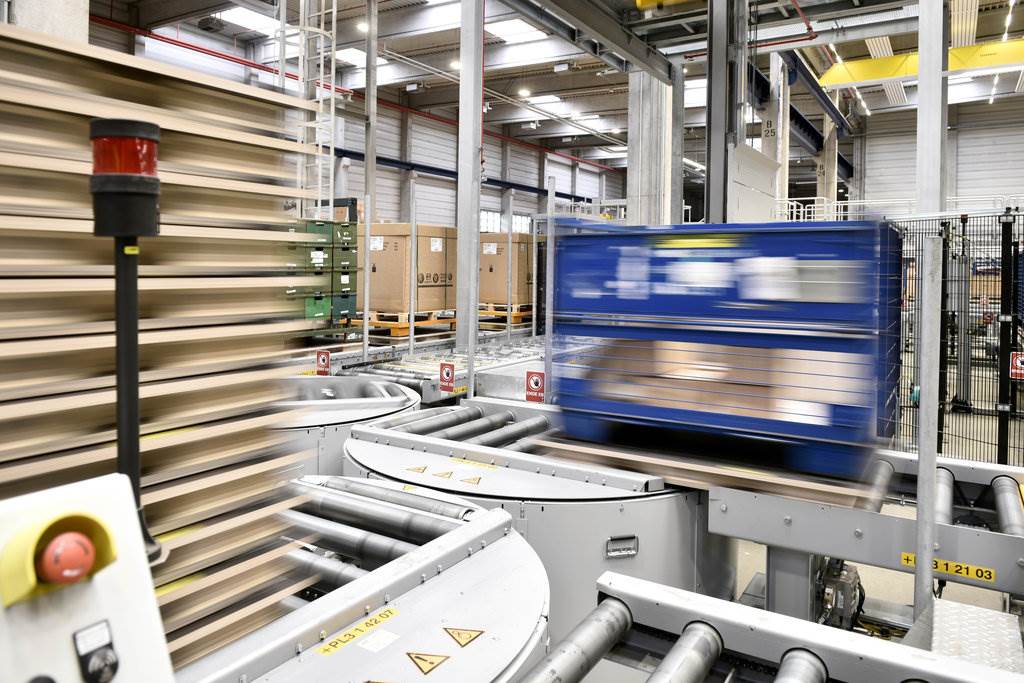 The parts are then packed into prepared boxes at a total of ten stations. 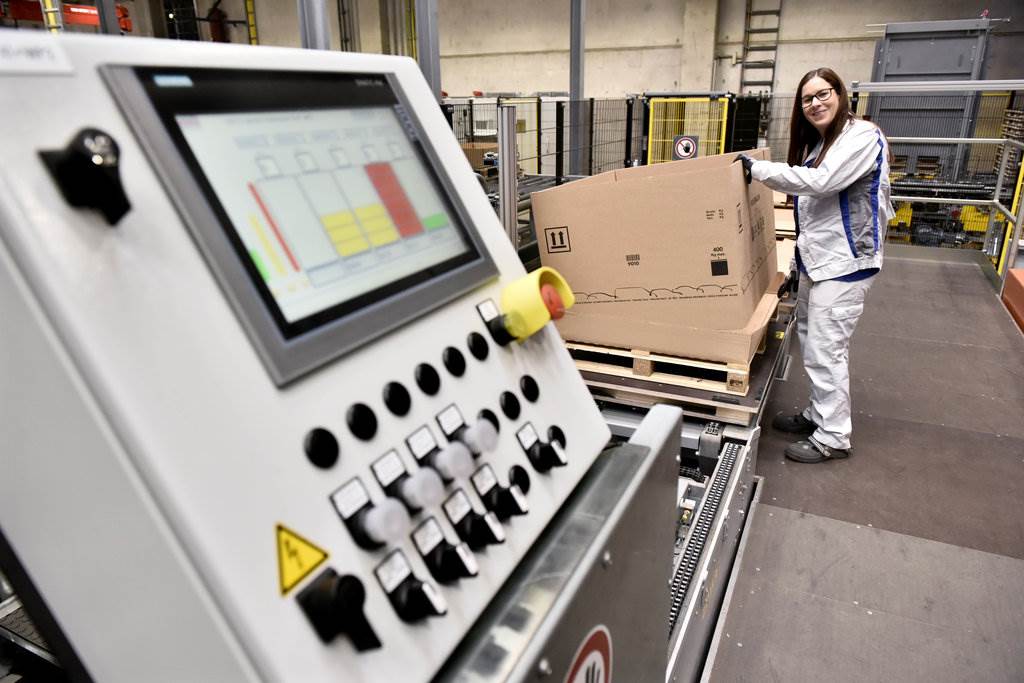 The ergonomic workstations offer lifting aids and height-adjustable floors. Even the height of the cage pallet can be adjusted. 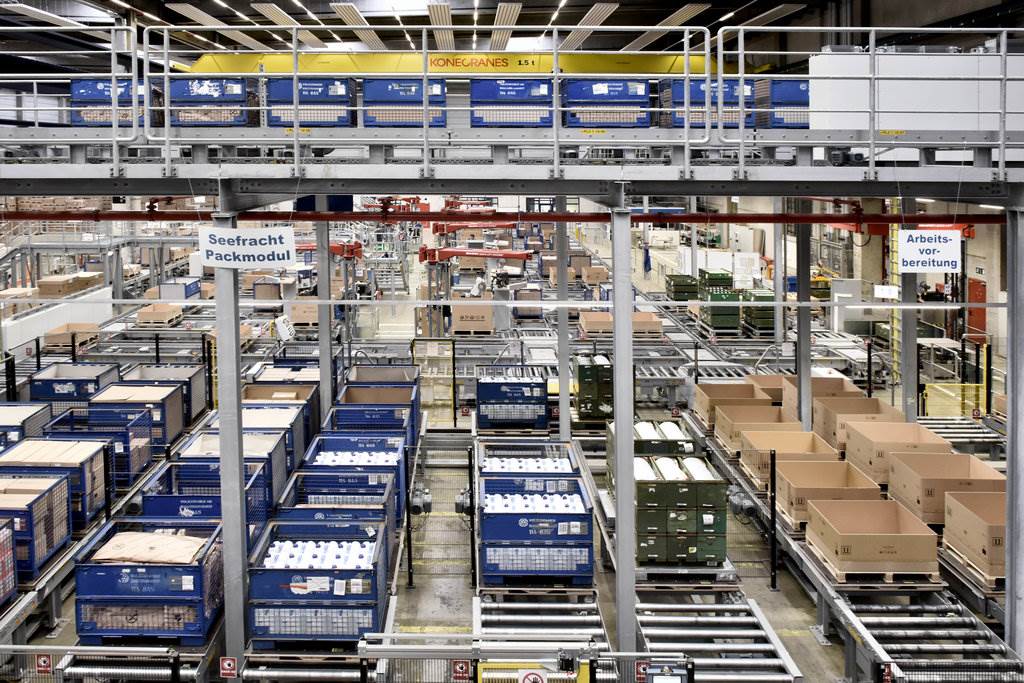 After repacking, the boxes are moved by the new conveyor system to the post-processing area, while the empty cage pallets are returned via the depot’s process loop. Now in post-processing, the package is labelled and then closed fully automatically. 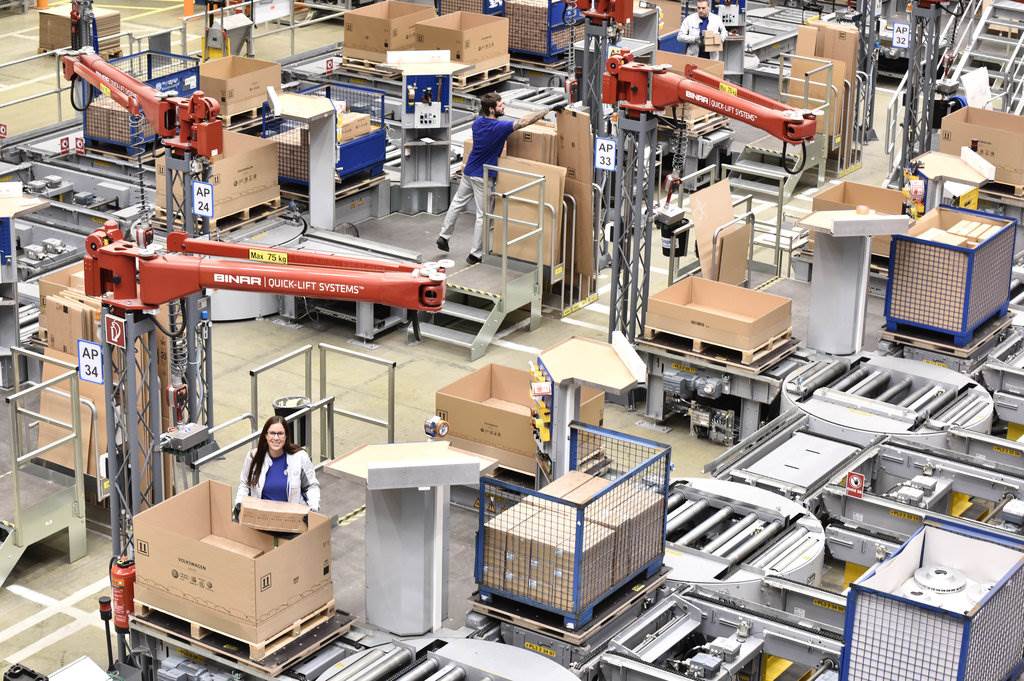 Only now does a forklift come into the picture; it takes the box to its respective loading area, thus assigning it to the suitable sea freight container. 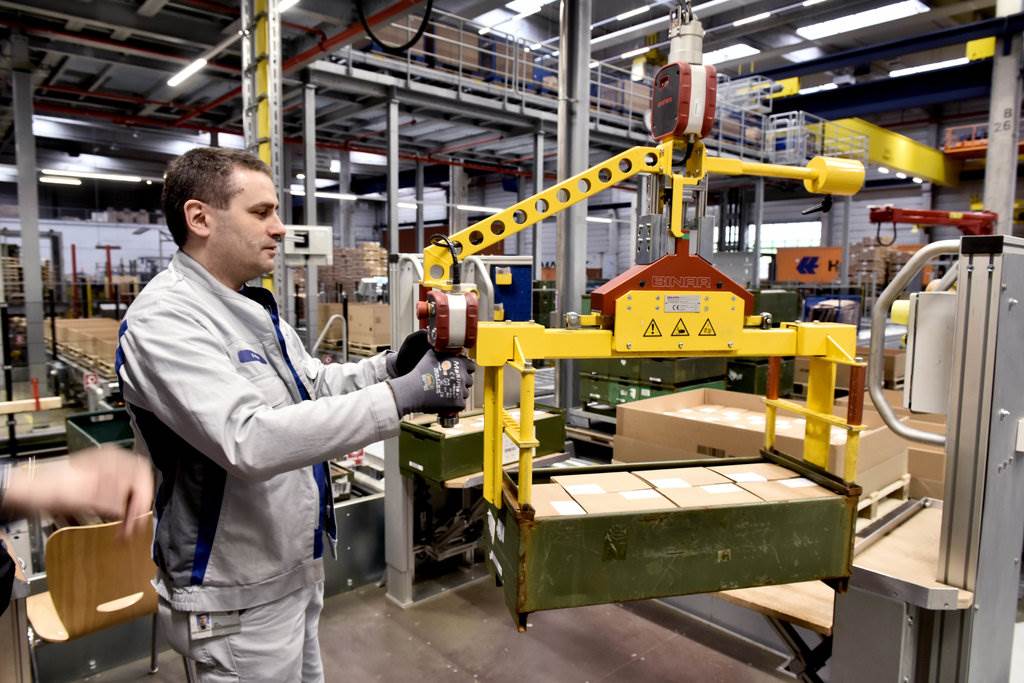 Once the containers have been completely filled, they leave the Kassel Depot for the freight centre in the Hessian city of Waldau. After that, the box is transported via train to the harbour in Hamburg or Bremerhaven and then shipped overseas. The destinations are the regional depots, which are generally responsible for processing the orders for the product ranges at the importers. Up to 80 containers are loaded every day. Over the course of a year, this amounts to around 21,000 containers. If the containers were lined up in a row, they would cover a distance of 300 kilometres, which is the approximate distance from Kassel to Hamburg. 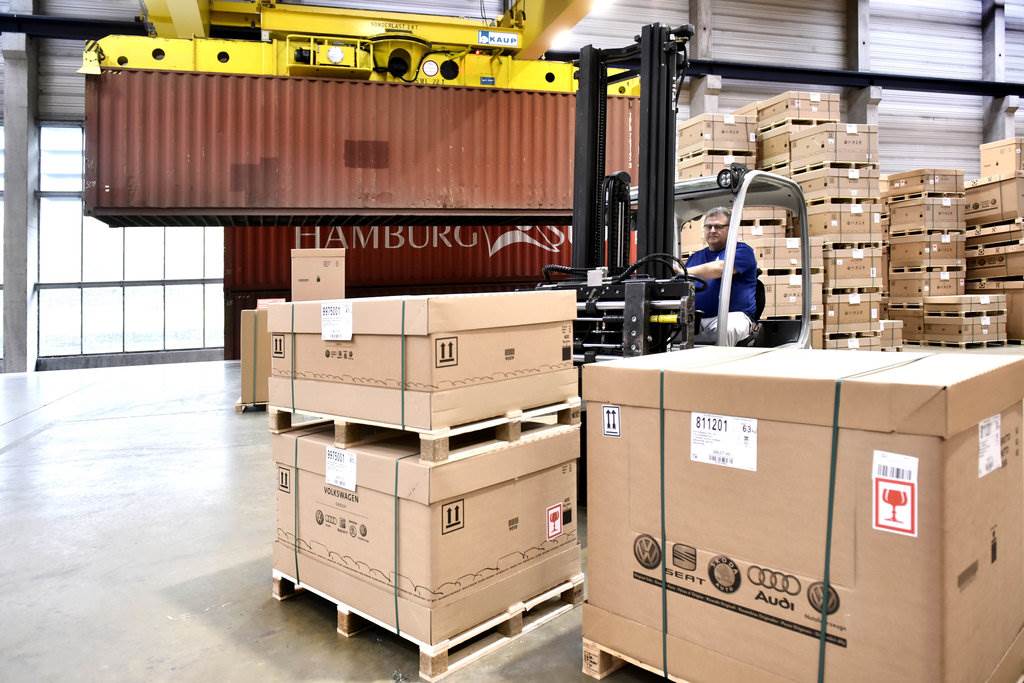 “The repacking facility is an investment in securing the future of our sea freight operations and also proves the significance of this department for the Volkswagen Group’s After Sales business worldwide” summed up the head of the depot, Wriebe.