Volvo Eicher: the power of two

Eicher Motors and Volvo Trucks are leveraging their strengths to not only make headway in the Indian commercial vehicle market but also benefit from global business opportunities. 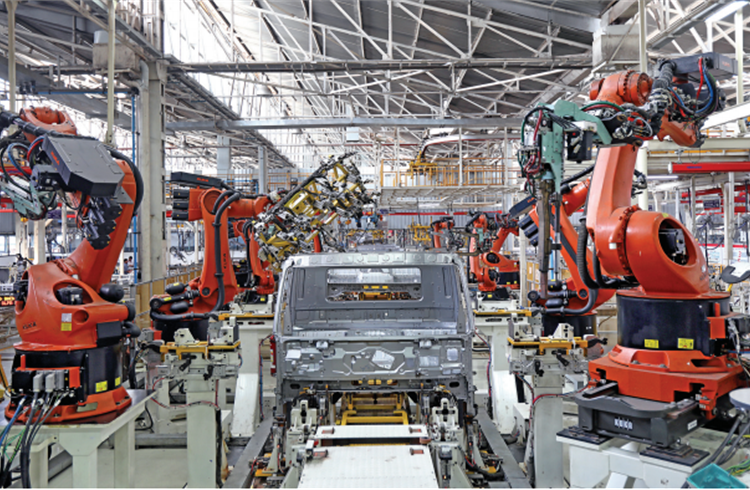 Think Volvo Eicher and the vision of smartly designed, rugged medium and heavy commercial vehicles (M&HCVs) rumbles into one’s mind. This Pithampur, Madhya Pradesh-based CV maker, which is well diversified into LCVs, ICVs, M&HCVs and buses, is looking to make the most of the uptick in the domestic CV market.

Over the past two years, which saw sluggish growth for the sector, the joint venture company has been consolidating operations, developing new products and upping the ante in terms of investment, all in a quest Volvo Eicher: the power of two Nearly 10 years since the joint venture began operations in India, Eicher Motors and Swedish CV major Volvo Trucks are leveraging their strengths to not only make headway in the domestic market but also benefit from global business opportunities. Mayank Dhingra visits the Pithampur plant, near Indore, and also gets a feel of a Pro 3015 truck on the in-house test track. to accelerate growth when the going turns good for the CV industry. And that time looks to be now.

In a bid to glean the latest developments at VE Commercial Vehicles (VECV), Autocar Professional decided to visit the company’s sprawling truck manufacturing facility spread across 70 acres of verdant land in the industrial town of Pithampur, on the outskirts of Indore. We even took a first drive of a Pro 3015 medium duty truck, but more on that later.

A little bit of history helps here. In 2008, Eicher Motors (which is also parent company to the iconic motorcycle marque Royal Enfield) inked a 50:50 joint venture with Swedish CV major Volvo, the world’s second-largest truck maker after Daimler Trucks. The JV, christened VECV, has since charted out a future roadmap in India’s competitive truck and bus market.

Essentially, the two CV makers came together as part of a joint effort to leverage their strengths to achieve disparate goals – while Eicher wanted to take the leap into the global arena with Volvo’s assistance, the Swedish truck major wanted a local hand for a smooth drive into the tough Indian market.

Prior to the Volvo tie-up, Eicher Motors had also collaborated with Mitsubishi in 1998 and for the next eight years, benefited immensely from the common-rail diesel engine technology from the Japanese automaker.

Over the past decade, VECV has invested close to Rs 1,000 crore in the facility to enhance the infrastructure and production standards, embrace state-of-the-art technology from Volvo and localise the same. The manufacturing operation, which started with domestic volumes of around 25,000 units annually between 2005- 2008, hit the 50,000 unit-mark in FY2017. The plant currently has an annual capacity of 100,000 units over three shifts. Along with developing strong brand equity for performance and reliability in India, VECV’s trucks are also exported to Bangladesh, Nepal, the Middle East and Africa.

With its wide range of products, especially in the 5-16-tonne segment, VECV has gradually increased its market share of the light and medium duty (LMD) segment to nearly 33 percent. The top two CV players, Tata Motors and Ashok Leyland, though continue to remain its prime competitors, with an overall market share of roughly 85 percent, across segments.

Volvo Eicher upped the ante about four years ago when it unveiled its Go Pro product and growth strategy. The new range of future-generation trucks and buses that the JV launched in early December 2013 was the result of strategies it has worked on for both domestic and export markets. The all-new product range, called the Eicher Pro series, then comprised 11 new products (both trucks and buses) covering the 5- to 49-tonne gross vehicle weight or GVW range. The range was then launched in a phased manner starting February 2014. While continuing to address the large-sized value segment, the new range marked the entry of the Eicher brand into the emerging premium segment where products have a higher power and torque combination as well as a greater refinement and sophistication. It was, indeed, a big step for Eicher Motors.

Since then, with gradual market and consumer acceptance coming its way, the company has upgraded and revamped all models from the erstwhile Eicher 2 (E2) series, into the Pro series, getting specific upgrades from Volvo, in terms of latest cabin designs and fine tuning of the engines and suspension setups.

To get a feel of the real thing, we took a first drive of the Pro 3015, a 15.7-tonne, double-axle, medium duty truck, with a payload capacity of 10.3 tonnes. The 3015 is built on a Domex ladder frame, offering a lightweight construction along with chassis strength of 650MPa. The frame is powder coated and the fuel tank comes sprayed with an anti-rust layer of aluminium silicate, which claims to ensure purer fuel storage and better engine health. The 4x2 truck sees the rear axle being driven by a Monotron propeller shaft, which is sealed and lubed for life and requires no greasing.

Volvo has brought in neat tweaks to the suspension as well, replacing the front leaf springs with a new parabolic design, which offers a much comfortable ride inside the cabin, as compared to the elliptical leaf springs doing duty at the back, which are meant primarily to support the load. 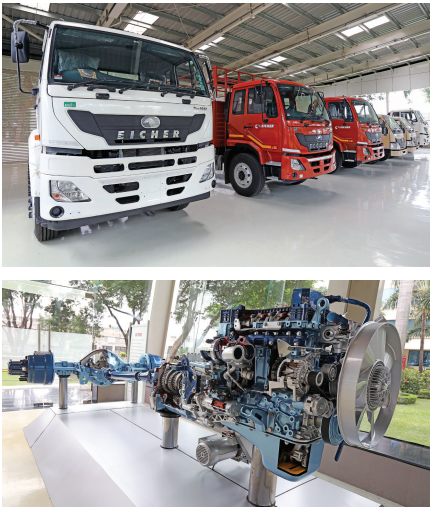 Power comes from a 3.3- litre in-line four-cylinder E494 turbocharged diesel engine, which generates 135bhp and 450Nm of torque, most of it being delivered between a low 1200-1800rpm to aid better pulling capability. The engine functions using Volvo’s CANBUS-based engine management system 3.0 with OBD 2.0 compatibility. The engine drives the rear wheels via a six-speed manual transmission, which is operated through a pneumatic clutch.

Driver comfort is accorded high priority and the 3015 gets power steering, a six-way adjustable driver's seat and a JVC-sourced music system as standard fitment inside its 2.0-metre-wide cabin. There is a sleeping bench right behind the front seats and the truck also gets provision to install an air-conditioning system later on. On the safety front, fog lamps, cruise control and ABS too come as part of the standard equipment.

We got on our hands on a spanking new 3015 at the plant's product Experience Centre and took it for a spin at the 800-metre-long test track, located further inside the factory. While it wasn't my first time behind the wheel of such a behemoth, I was still pretty excited to have a go at it.

Accompanied by a senior official from Volvo Eicher's product testing department, the initial experience inside the 3015 was as a co-passenger for two laps, getting to know the course of the track and the nitty-gritty of handling the 5.4-tonne vehicle. 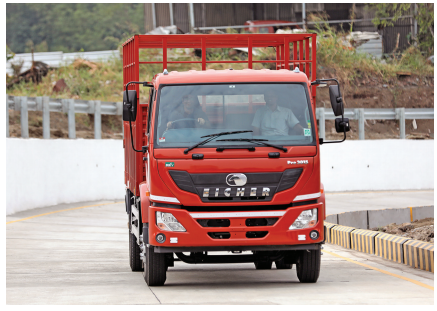 The test track inside the Volvo Eicher facility has been designed taking cues from Japanese standards of Customer Satisfaction and Vehicle Evaluation System (CSVES) and includes banking of the road surface, high speed curves and a straight patch. While all vehicles meant for defence and special customers have to go through a drive of the track, a random sampling of 10 percent of the daily production is subjected through it otherwise. However, the plant also has an end-of-line test (EOLT) facility, which conducts dynamic testing of all the trucks rolling off the assembly line on a suspension bed.

The 3015's low-end torque was quite abundant and I took off from standstill without any fuss. The clutch is reasonable in weight and travel for a vehicle its size, but the gearshifts are notchy, especially while shifting from second to third, demanding a conscious effort. The power steering did make quite a difference to the maneuverability and should be highly beneficial in cutting down on driver stress levels.

While the ubiquitous air brakes do their job well, the 3015 works using an air processing and distribution unit (APDA), which is much more efficient in drying up the pressurised air stored in the brake compressor as compared to a regular drying and distribution unit (DDU), and also equally distributes the compressed air to the left and right halves of the vehicle, so as to perform a stable braking action. After three laps around the track, it was time for the VECV executive to take to the wheel again for us to now be driven through the shower test area.

Another first-hand experience was of going behind the curtains of a vehicle's shower testing process. We rolled up both the front window glasses, as well as locked the smaller butterfly panes ahead of them and got ready for the water jets to whoosh away. 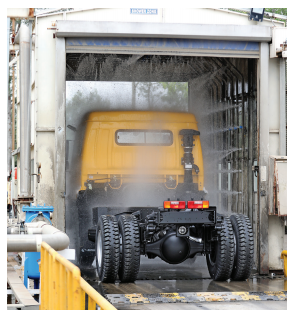 The cabin was subjected to multiple water streams from all directions, at high pressures between 1.7-2.5 bar and leak points including the weld joints and the glass channels did bear the force for the next three minutes. The 3015 came out clean and passed the test with flying colours and was parked into its bay before we headed for lunch and concluded the drive.

With the younger generation gradually taking over management of family logistics businesses, a good number of new customers are preferring a fully built truck, with a loading deck attached on top, instead of taking just the chassis and then getting it built outside, which is both time consuming as it puts a new vehicle off service for at least three weeks and also leaves a lot to be desired in terms of the workmanship. VECV now provides the option of a fully constructed truck, at a slight premium. The 3015 gets a high side-deck body, which is 7.2 feet wide and 19 feet long.