From the new Celerio to the Ignis, Maruti dominates the list of most fuel-efficient cars on sale. Renault, Toyota and Datsun too make an appearance. 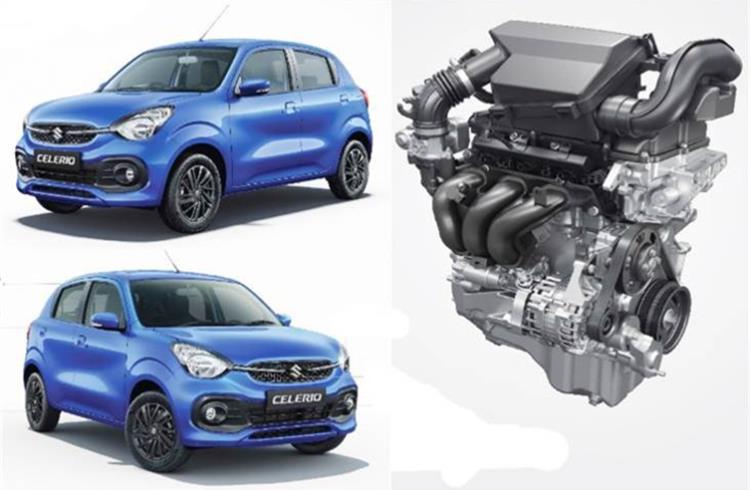 The new Celerio is a fuel-sipper.with a notable 23% improvement over the earlier model’s 21.63kpl. Put it down to the all-new K10 C, three-cylinder petrol engine. 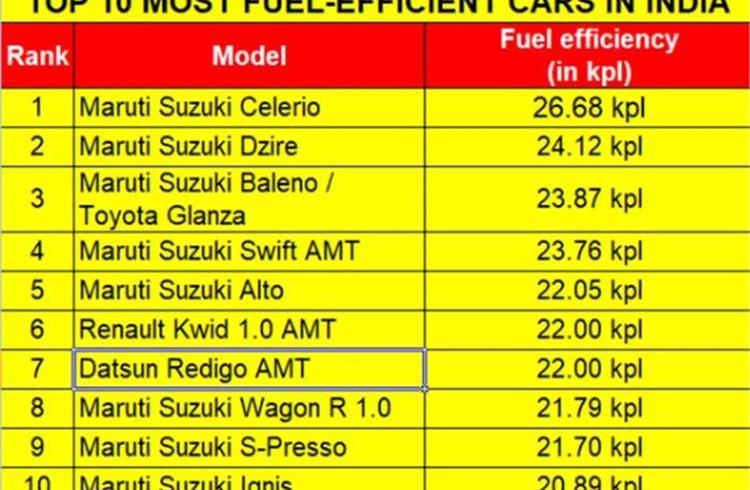 From the new Celerio with 26.68 kilometres per litre to the Ignis that delivers 20.89, Maruti Szuuki has all of 8 models in the Top 10 fuel efficient car chart. 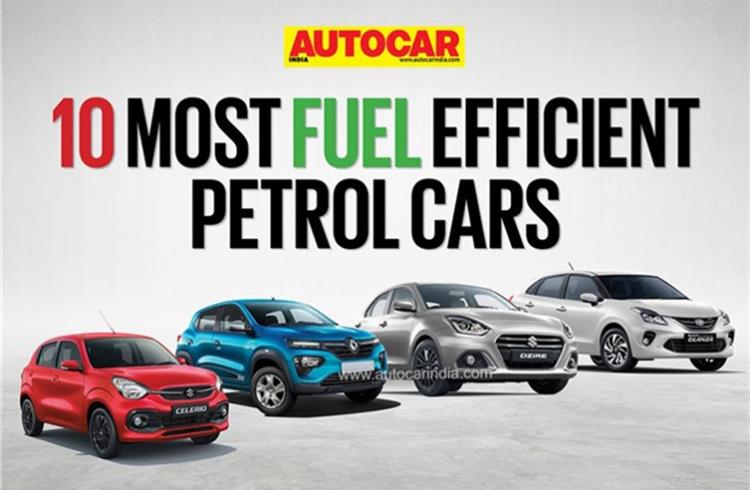 While car owners in India have seen some respite in petrol rates – with the November 4 excise duty cut by the Centre and some states and prices remaining stable – a price hike in the future cannot be ruled out. So, having a fuel-efficient car can help you save that little bit more on your daily journey.

Here’s looking at the most fuel efficient petrol cars currently in the market. Do note that the list is based on official figures revealed by manufacturers with actual figures expected to vary depending on driving conditions and styles.

Maruti Celerio AMT: 26.68kpl
With the launch of the second-gen Celerio, Maruti’s hatchback has leapfrogged eight places – from nine to one – overtaking the Dzire AMT by a comfortable margin. At 26.68kpl, the VXi AMT is the most fuel-efficient model of the Celerio on sale in the market, followed closely by the ZXi and ZXi+ AMT variants at 26kpl. Even the least fuel-efficient variant, the ZXi+ manual at 24.97kpl, is more fuel-efficient than the most frugal Dzire.

Maruti has achieved this number thanks to a new, more efficient DualJet K10 petrol engine and the switch to Maruti’s latest Heartect platform. The new petrol engine produces 67hp and 89Nm – down 1hp and 1Nm over the previous Celerio – and is paired with either a 5-speed manual or AMT gearbox as before.

Maruti Suzuki Dzire AMT: 24.12kpl
Besides the design changes and longer equipment list that came with last year’s facelift, one of the most important changes was the 1.2-litre K12M petrol engine being replaced with the 1.2-litre K12N unit that comes with a start-stop function. The Maruti Suzuki Dzire is 7hp more powerful than before and more efficient in both 5-speed manual (23.26kpl) and 5-speed AMT (24.12kpl) form, making it the most fuel-efficient petrol sedan on sale in India.

Toyota Glanza / Maruti Baleno: 23.87kpl
Badge-engineered siblings, Maruti Suzuki’s Baleno and Toyota’s Glanza, share the third spot in their mild-hybrid avatars with an ARAI-rated economy of 23.87kpl. Their powertrains comprise 90hp, 1.2-litre engines and an integrated starter generator and a 12V lithium-ion battery that adds in start/stop and energy recuperation functionalities, along with a (very) mild power assist. Since the Baleno mild-hybrid is priced at Rs 7.60 lakh, thereby undercutting the Glanza mild-hybrid (Rs 7.65 lakh), the Maruti Suzuki is the most affordable mild-hybrid car you can buy today in India. Do note that both premium hatchbacks are also available with an 83hp, 1.2-litre petrol engine that has an ARAI rating of 21.01kpl for the manual and 19.56kpl for the CVT version.

Maruti Swift AMT: 23.76kpl
With the facelift earlier this year, the Maruti Suzuki Swift now shares its 90hp, K12N petrol engine with idle-start stop tech and 5-speed manual and AMT gearbox options with the Dzire. In the peppier hatchback, the powertrain options’ mileage figures are slightly lower – 23.2kpl and 23.76kpl for the manual and AMT, respectively.

Maruti Alto: 22.05kpl
Maruti Suzuki’s smallest model is powered by a frugal 48hp, 0.8-litre engine that has been certified by the ARAI to deliver 22.05kpl. While the Maruti Suzuki Alto feels basic and has a cramped cabin, its low price, high efficiency and minimal maintenance costs make it a popular buy. There’s also a CNG variant on offer that has an equally impressive mileage of 31.59km/kg of gas.

Renault Kwid 1.0 AMT: 22kpl
The Renault Kwid comes with two engine options – a 54hp, 0.8-litre and a 68hp, 1.0-litre. However, it is the latter that can go an impressive 22km on a single litre of petrol, when mated to the AMT gearbox. The Kwid 1.0 manual is nearly as efficient with an ARAI mileage of 21.74kpl, while the 0.8-litre unit is rated at 20.71kpl. This makes it marginally more fuel-efficient than its cousin from Datsun, the Redigo, with which it shares its powertrain options.

Datsun Redigo AMT: 22kpl
Datsun updated its smallest model last year and it’s much better for it. Besides the comprehensive styling update, the Datsun Redigo facelift got more equipment too, such as internal wing mirror adjust across the range and an 8.0-inch touchscreen infotainment for the top-spec T(O) variant. The upgrade to BS6 norms meant that both the 54hp, 0.8-litre and the 68hp, 1.0-litre engines’ ARAI figures are slightly lower than the BS4 versions. However, at 22kpl for the 1.0-litre engine with the AMT gearbox, the Redigo still ranks among the most frugal petrol cars in the country. The 0.8-litre and 1.0-litre engines are rated at 20.71kpl and 21.7kpl, respectively, with the manual gearbox.

Maruti Suzuki Wagon R 1.0: 21.79kpl
Like most Maruti Suzukis, one of the reasons buyers opt for the WagonR is its economical engines. The tall-boy hatchback gets two units – a 68hp, 1.0-litre, and an 83hp, 1.2-litre. The smaller engine is slightly more frugal, delivering 21.79kpl to the 1.2-litre’s 20.52kpl. Both units get a 5-speed AMT too, which have the same ARAI-rated fuel efficiency as the manuals. The 1.0-litre engine also comes with a CNG option that is rated at an excellent 32.52km/kg; incidentally, the Wagon R is the most frugal CNG car on sale today. Another reason for the Maruti Suzuki WagonR’s relatively higher sales numbers is its price and value for money quotient.

Maruti S-Presso: 21.7kpl
The S-Presso is a typical small Maruti – it weighs relatively less, comes with a frugal and peppy engine and is well-priced for what it is. Considering it shares the 68hp, 1.0-litre petrol engine with the Celerio and WagonR, it isn’t surprising that the Maruti Suzuki S-Presso has similar ARAI efficiency figures. Interestingly, it is the higher-spec VXI and VXI+ variants (which ride on 14-inch rims) that have a marginally higher 21.7kpl rating – the lower variants are rated at 21.4kpl. Maruti’s Renault Kwid and Datsun Redigo rival also gets a 5-speed AMT option – only on the VXI and VXI+ variants – and a factory-fit CNG option on the mid-spec LXI and VXI trims.

Maruti Suzuki Ignis: 20.89kpl
While the Ignis may not be the sales sensation Maruti Suzuki hoped for, it is an underrated, if expensive, hatchback (for what is on offer). A highlight of the Maruti Suzuki Ignis is the peppy 83hp, 1.2-litre K12M petrol engine, which delivers an ARAI-rated efficiency of 20.89kpl in manual and AMT automatic form. 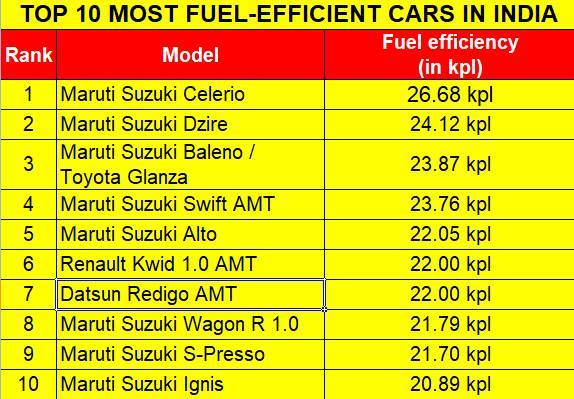