Hyundai, India’s largest car exporter, has two plants in the region and has invested an estimated US $ 2 billion in the sector so far. 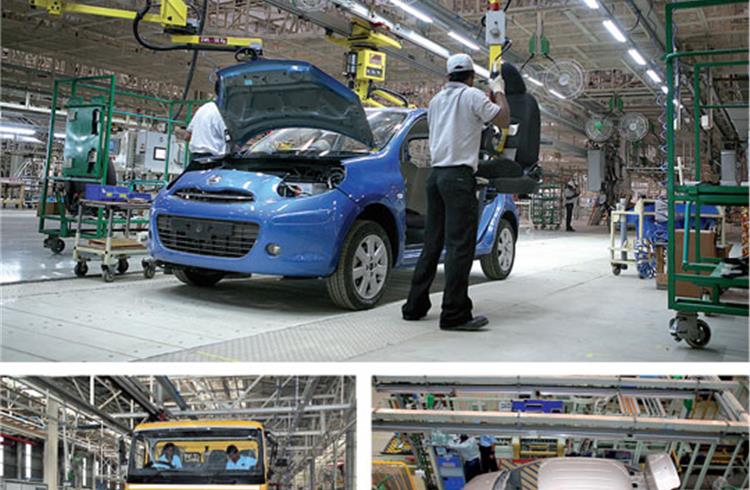 The state of Tamil Nadu and in particular, the Chennai-Sriperumpudur-Oragadam area, is one of India’s busiest automotive hubs. The biggest names in the global auto sector have established their bases here including Ford India, an early entrant, along with Hyundai Motor India and the Renault-Nissan joint production unit and most recently, Daimler India Commercial Vehicles (DICV). BMW India, which has an assembly plant, recently rolled out its 25,000th car from the facility near Chennai.

Hyundai, India’s largest car exporter, has two plants in the region and has invested an estimated US $ 2 billion in the sector so far. The Renault-Nissan factory that rolls out the Micra is one of two global hubs for the hatch, the other being Thailand. DICV unveiled its BharatBenz range of vehicles in February this year and the first lot of vehicles will roll out from the facility that has one of India’s most modern testing tracks.

The big names have spawned a variety of automotive suppliers, many overseas while the homegrown ones have flourished in what is sometimes called the ‘Detroit of Asia’. Among suppliers, the top names are the Rane Group, a clutch of seven companies, Lucas-TVS, Saint Gobain, and the Amalgamations Group, to mention but a few.

What attracted the new entrants to this automotive belt in Tamil Nadu were a host of factors including a well-entrenched automotive component industry. The state government has gone out of its way to woo investors and has gone the extra mile to support industry. It is believed that as part of Hyundai’s MoU with the state government, a dedicated rail line was to be established between the factory and the port. Ford India too would benefit substantially from such a facility, what with carmakers keen to drive global exports from the region.

Another key factor that makes Tamil Nadu attractive is the availability of engineering talent. The state’s engineering colleges churn out 300,000 graduates a year and companies here have a larger pool to choose from. As Ford India’s chief Michael Boneham says, “The technicians are diploma holders, ambitious, want to get ahead aggressively, and this capability of people gives us the leading edge in competition.” But there’s also a different point of view. “Things have changed however since the days when a factory manager could choose from among people lining up outside the gate,” says Ram Venkataramani, director, India Pistons.

Given its abundance of engineering talent, it is no wonder that carmakers have also established their R&D hubs here too. If Mahindra & Mahindra has the Mahindra Research Valley (MRV), then Hyundai has its own R&D centre at Hyderabad where, among other projects, the Eon hatchback was designed. In addition, the longstanding players in the sector have been quietly going about their own R&D. Ucal Fuel Systems set up its R&D unit way back in 2002 at Ambattur and has to its credit a host of unique products.

Tamil Nadu’s other key advantages are its ports – Chennai and Ennore – from which players such as Ford India, Hyundai and more recently, Renault-Nissan have exported cars to markets globally. Meanwhile, Karnataka too is setting a fast pace.

However, not all is hunky-dory. The region has some serious issues with the infrastructure such as roads and more importantly availability of power. Venkataramani says power-intensive businesses like foundries face a major problem.

Despite these issues, OEMs are investing in the south. India Yamaha Motor and Triumph Motorcycles have recently announced plans for plants in south India, the Japanese bikemaker for a Chennai site and the British manufacturer opting for Bangalore.

Toyota Kirloskar Auto Parts (TKAP) is setting up its third plant for automotive components at Bidadi, on Bangalore’s outskirts at an investment of Rs 500 crore. And staying with Karnataka, component major Bosch has said it will relocate manufacturing activities with related support functions of its city plant at Adugodi to Bidadi in two phases from now till 2015-16. It will spend nearly Rs 600 crore for development of the facility in both phases.

On the real estate front, land prices are another key issue that is of concern to the industry. In Chennai, some parts are more expensive than Manhattan, one source told this correspondent.

So what is the overall picture looking like? What are the areas of concern?

Success breeds its own problems. Land issues can be very litigious if things go wrong as the Singur case in West Bengal has shown.

In the last year, the developments in Gujarat that have resulted in Peugeot (which Tamil Nadu was so confident it had got) and Ford investing there is giving the south a run for its money.

“The state government has to wake up to the reality and look at what is happening in other states. There is a need for proactive measures to be taken. We must highlight problems here and not stay silent,” urges M Rafeeque Ahmed, chairman, FICCI, Tamil Nadu State Council.

Today, a lot of companies are attracted by better governance practices, easier approvals and the virtual red-carpet treatment that Gujarat has laid out for potential investors, including automotive, is being seen as a great example to follow. Clearly, Tamil Nadu cannot take it for granted that it can pick and choose who it wants any longer.

There are also talent issues. Poaching is rife in the south and one has to sieve the wheat from the chaff. A raft of private engineering colleges churn out graduates of suspect quality. While talent paucity is a country-wide issue, it is more exacerbated in states like Tamil Nadu. No wonder, FICCI has requested the Centre to allow a permanent chair in the board that decides the syllabus and running of ITIs across the country and has got it, says C N Rajasekar, president, Tamil Chamber of Commerce.

There’s no gain saying the fact that the automotive investments have galvanised industralisation in the south, and Tamil Nadu. R Dinesh, head of CII’s Tamil Nadu State Council, says a proposal for a global auto research centre has been suggested to further boost the south’s credential. However, the need of the hour is top-class infrastructure. OEMs and component suppliers are increasingly looking at their cost structures which ultimately determine margins and profitability. The success and pitfalls of the Southern auto cluster have key lessons for India’s automotive sector. What is heartening is that despite some trials and tribulations, a clutch of South India-based companies are leading the way with innovation and dynamism.