The festive month of October 2013, leading to Diwali in early November, failed to deliver as the market remained stagnant for the industry majors. 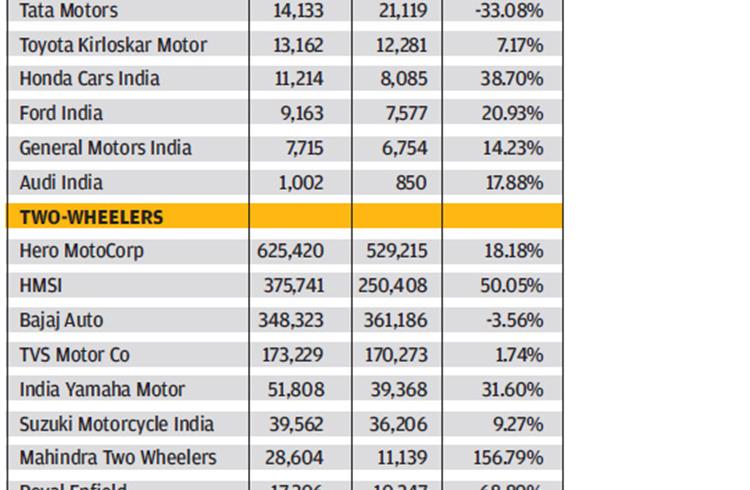 The festive month of October 2013, leading to Diwali in early November, failed to deliver as the market remained stagnant for the industry majors. While Maruti Suzuki India and Hyundai Motor India saw virtually flat sales, the smaller OEMs such as Toyota Kirloskar Motor, Honda Cars India, Ford India, and General Motors India recorded growth in sales. However, two-wheeler manufacturers saw good growth in October 2013 thanks to handsome demand from India's Tier 2 and 3 towns.

The Alto was the top grosser with 22,574 units sold while the Swift posted sales of 19,047 units, its highest in the current financial year; the popular Dzire sold 17,211 units. In the UV segment, the Ertiga sold 7,224 units, making an appearance in the Top 10. The Omni also entered the Top 10 with 6,567 units sold taking the number of Maruti models in the Top 10 ranking to six. Clearly, these people-movers have benefited from a festive boost given that the Omni breached the 6,000-unit mark.

Hyundai Motor India’s sales were flat too, with the company selling 36,002 cars domestically as against 35,778 cars in October 2012. Sales rode on the spectacular performance of the recently launched Grand i10 which sold 11,519 units, zooming ahead of the Mahindra Bolero in the Top 10 pecking order. Rakesh Srivastava, senior VP, sales & marketing, HMIL, said: “In this challenging market environment, sales have increased by 17 percent over the last month (September 2013) on account of the monsoon, festival buying and strong sales of the Grand i10 which received an overwhelming customer response, making it to the top five volume sellers within two months of its launch.”

Mahindra & Mahindra’s passenger vehicles (UVs, Verito, Vibe) business registered sales of 22,924 units during the month, down by 14.88 percent (October 2012: 26,932 units). However, the company claims that its overall automotive business has grown by 17 percent in October 2013 over its September 2013 sales. The Bolero touched 10,705 units, again reflecting the impact of the festive season. Pravin Shah, chief executive, automotive division, M&M, said, “During such tough and challenging times, we are heartened with our performance in October 2013. The auto industry continues to look forward to an immediate support in terms of a stimulus package to perk it up as well as bring back the growth momentum for the economy in general and the automotive sector in particular.”

Tata Motors sold a total of 14,133 passenger cars during the month, its highest aggregate tally in this fiscal but 33 percent down on year-ago sales of 21,119 units. Sales of the Nano, Indica and Indigo range of cars last month comprised 10,944 units while the Sumo, Safari, Aria and Venture range stood at 3,189 units.

Driven by burgeoning demand for its Amaze saloon, HondaCars India posted sales of 11,214 units in October 2013, up 38.7 percent (October 2012: 8,085 units). The company has clocked sales of 9,564 units of the Amaze alone while other models such as the Brio, City, Accord and CR-V added 1,472, 31, 60 and 87 units respectively to the monthly total. JnaneswarSen, senior VP, marketing & sales, HCIL, said, “On the happy occasion of Diwali, we wish to thank our customers for making Amaze as the best-selling model for HCIL in October 2013.” The company has received enquiries from locations further afield from its dealerships and is holding events in these locations to woo buyers. The company is slated to start a third shift at the Greater Noida plant to reduce waiting periods.

General Motors India sold 7,715 units in October 2013 against 6,754 units sold during October 2012, up 14.23 percent. Model-wise, sales included 2,679 units of the Chevrolet Beat, 1,965 units of the Enjoy MPV and 1,837 units of the Sail. P Balendran, vice-president, GM India, said, “The marginal sales rebound seen last month is on account of the festival season combined with emerging demand. Discounts are at its peak and sales of diesel vehicles are tapering off as the price differential between the two fuels is dropping sharply. The buoyancy in the market is completely missing and we don’t see any sustained market upturn before a new government assumes office after general elections. ”

The festive season seems to have been a boon for two-wheeler companies. Barring Bajaj Auto, each firm posted positive totals thanks to demand from smaller towns.

Hero MotoCorpachieved a milestone with its highest-ever monthly despatch and retail sales – 625,420 units in October 2013, up 18.18 percent over the 529,215 units sold in October 2012. The month has also set a benchmark of sales in excess of 600,000 units, a figure no two-wheeler manufacturer has crossed thus far.

Anil Dua, senior vice- president, marketing & sales), HeroMotoCorp said, “Our retail sales – which is a real barometer of customer response – has also set a new record. This sales momentum has been helped by our star brands Splendor and Passion and also by the new products.”

Yamaha Motor India sold 51,808 units, up by 31 percent (October 2012: 39,368 units). Roy Kurian, vice-president, said, “We are very pleased with our consistent sales performance this year at a 35 percent average sales growth due to our strong product portfolio, upbeat customer confidence and new launches in the scooter segment. We are extremely positive about our special edition FZ series motorcycle and new scooters like the Ray Precious Edition and Ray Z.”

Suzuki Motorcycle India recorded sales of 39,562 units as against 36,206 units sold in October 2012, up by 9.27 percent. Finally, Mahindra Two Wheelers’ domestic sales for October 2013 were 28,604 units, an increase of 157 percent over October 2012 sales of 11,139 units. VirenPopli, executive vice-president, said, “The Centuro has continued to receive an excellent response from customers through the festive season, with an increasing number of bookings. We are expanding production to meet demand and are also focused on expanding sales and service network.”

In the final analysis, the good monsoon across the country has helped drive demand and both carmakers and two-wheeler makers have recorded better numbers but the overall performance remains muted. Discounting continues as OEs try and woo buyers who are very hesitant to open their wallets as high interest rates continue to bite.