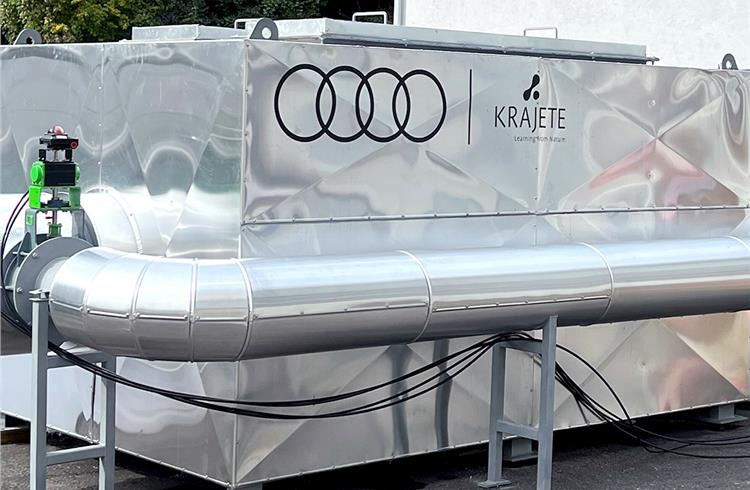 Who would ever have guessed that some of the stuff that we all breathe could end up being among the biggest threats to the planet? Clearly CO2 is that, but what’s frustrating is that we can’t just magic up a giant school chemistry experiment and make it all go away. Or can we?

There is such a thing and it’s called direct air capture (DAC), a technology already in play today and which could in theory make a difference to global warming if it continues to scale up from the current small beginnings.

Audi is working with Austrian green-tech company Krajete to jointly develop DAC systems. A recently established plant in Austria is based on an inorganic filter material that can adsorb a high proportion of CO2 molecules.

These are then chemically absorbed in a following process, with the CO2-free filtered air being released back into the atmosphere. The bafflingly similar terms adsorb and absorb are entirely different things.

Adsorb means molecules or atoms deposited on a surface, while absorb means one substance is soaked up to form part of the bulk of another, like water being absorbed by a sponge.

In the process being developed by Audi and Krajete, the temperature and pressure conditions needed to collect (adsorb) and remove them (absorb) are the same, which isn’t usually the case. As a result, more CO2 can be removed in any given timeframe.

In common with other methods, the process consumes a fair bit of energy, which in this case is supplied by a photovoltaic system on site. Looking at the broader picture, capturing diluted ambient CO2 from the air is more energy-intensive than trapping it from a concentrated source, like an industrial flue spewing exhaust from a furnace.

At the same time, capturing atmospheric CO2 isn’t dependent on the location, so plants can be sited with best access to sustainable energy, such as sunnier climes for solar, or near hydro or thermal energy sources.

According to the International Energy Agency, there are 18 DAC plants operating in Europe, the US and Canada today, capturing some 10,000 tonnes of CO2 per year. A single plant is at a stage of “advanced development” in the US that will swallow 1Mt (1,000,000 tonnes) per year. The agency says net zero emissions by 2050 will require 60 times that but that such a figure is within reach.

The modest amounts captured today are often used for things like fizzy drinks, and only two of the 18 plants are storing the captured CO2 (sequestering it) in geological formations. Eleven more plants are under way, and if all came to fruition, the total DAC would amount to 5.5Mt by 2030.

One of them is the Storegga Dreamcatcher Project, which involves a large-scale plant in the UK capable of capturing between 500,000 and 1,000,000 tonnes of CO2 annually and storing it offshore in deep geological formations. Captured CO2 is also considered a useful raw material, though, and when combined with hydrogen is used to make carbon-neutral synthetic fuels.