While the market leader celebrates the rollout of its two-millionth truck from the Jamshedpur plant, the market slowdown and entry of new rivals pose a key challenge for India’s venerable truck brand, says Sumantra Barooah. 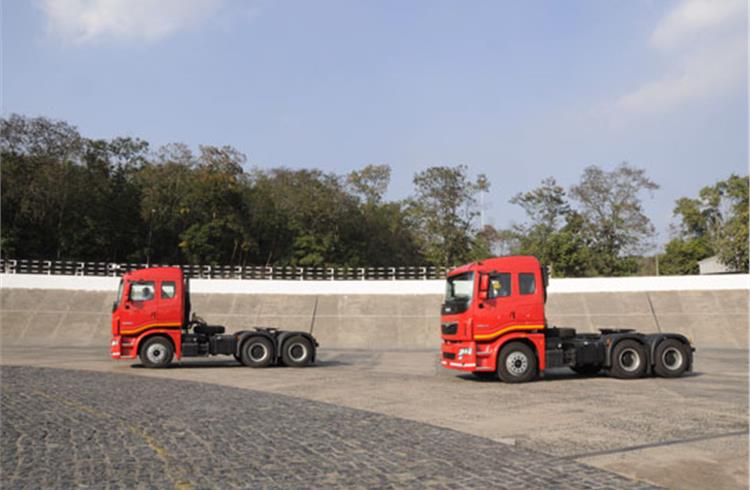 Tata Motors’ mother commercial vehicle plant at Jamshedpur had reason to cheer on February 19. On that day, a bright yellow Prima 2528 tipper rolled out as the two-millionth vehicle from the plant from where the manufacturing of trucks began way back in 1954.

On hand to witness this milestone was Tata Motors’ managing director, Karl Slym, who has taken the top job just five months ago. “We are proud that this mother plant from where our operations started, has released its two-millionth truck. It is a plant that we have modernised over the years and today, it produces our most technologically rich and high-performing civilian and defence products that cater to customers across the world.”

The two-millionth truck rollout comes at a time when India’s commercial vehicle industry is experiencing its toughest times in recent years. The slowdown has resulted in a 30 percent decrease in the medium and heavy commercial vehicles, the mainstay of the company. Sales have been falling, with OEMs facing the brunt of low demand and delayed purchases as a result of high interest rates and weak demand for freight. Adding to this is the virtual closure of the mining industry in key states that has affected sales of tippers. Tata Motors, which has a 56 percent overall CV market share, saw its January 2013 overall sales grow six percent to 42,571 units. But that growth has been due to robust sales of LCVs, up 24 percent, led by the Ace range (January 2013: 33,849 units), a 55 percent increase over the 21,831 units sold in January 2012.

Slackening demand for Tata's M&HCV range has led to a cut in production and the company is undertaking a review of its expansion plans. “We are currently utilising 50-70 percent of capacity at both the Jamshedpur and Lucknow plants together,” says Ravi Pisharody, executive director, Tata Motors. The two plants have a combined capacity of 234,000 units per annum (Jamshedpur: 144,000/Lucknow, buses and trucks: 90,000). With the cut in production, Tata has also gone for block closures and reduction in its workforce. The Jamshedpur facility has 5,600 workmen as well as a ‘flexible pool’ of 5,100.

During the lean production period, teams from the 'flexible pool' work in alternate months at the plant. If the economy does not pick up, Tata Motors, and its peers in the industry, face the problem of overcapacity. Speaking to a group of journalists invited to witness the two-millionth rollout, Pisharody says, “Even if the economy grows at five percent for a long period, there will be overcapacity.” He adds, “Unfortunately, no green shoots (in the economy) are visible yet. The current downturn is longer than the one in 2008. It is being compared to the downturn of 1999-2000, which took a long time to recover.”

Slym says the Indian government needs to be seized of the huge decline in sales of M&HCVs, which are the termed as the barometer of the economy and play a key role stimulating growth. If a revival is to take place, the government needs to get its act together on its infrastructure-related spend as well as the mining sector. Meanwhile, Tata Motors is investing effort and monies in its R&D and new product development programme. Slym reveals that just over half of Tata Motors' Rs 3,000 crore R&D budget for 2012-13 has been earmarked for the CV business. In line with its earlier-announced plan, the company says it has launched 25 new offerings (including variants) in the CV market in 2012-13. Also on the cards is a refresh of the old Tata workhorse – the 407 – but no dates are out as to its launch.

While M&HCV sales are down significantly, Tata Motors is banking on its “robust downward cyclical portfolio” of LCVs and pick-ups to cushion the fall. It sold 225,000 vehicles in the LCV market of 383,000 for the April-January period in 2012-13. That is 56,500 more LCVs compared to the same period during the previous year.

In tune with the times

Meanwhile, Tata Motors is now gearing up for the launch of the Ultra range of LCV and intermediate CVs. The first of these products (5 to 14 tonnes) is expected during the second half of 2013. The range will be powered by a new-generation 3-litre (138 hp) and 5-litre (168 hp) common-rail 16-valve engines that promise to offer higher aggregate life, longer service intervals and low NVH levels.

At the same time, the company’s portfolio is seeing a variety of iterations. For example, the LPT 3723 launched last year has seen good demand and may replace the LPT 3118. Its semi-forward cabin is also going through some major iterations.

The Prima range, at the top bracket of Tata’s portfolio, is also gradually gaining traction. The introduction of the LX range which comes equipped with fewer features and a different engine, and a 10 percent hike over the standard range, in September last year, has also helped drive sales. In the defence segment, the company’s vehicles are set to get some added oomph with the addition of the LPTA 5252 12X12. The model will undergo trials by the Indian Army which typically takes a year as the army tests the vehicles in various climatic conditions.

Along with the truck portfolio, the Jamshedpur plant is also undergoing a makeover. The plant, spread over 603 acres, has been renovated in sections for greater energy efficiency and productivity. It houses many facilities including those of Tata Cummins, TML Drivelines, Taco and Tata Technologies.

Meanwhile, Tata Motors continues to invest in R&D. It has set up a chassis dynamometer and the eight-poster testing beds at an investment of around Rs 80 crore. The dynamometer, for example, can test vehicles ranging from 3.5 tonnes to 50 tonnes. The engineering and research centre within the plant also has a digital prototype lab that enables product development and design benchmarking.

The facility also helps in fabrication of proto parts for chassis and BIW (Body in White). If the eight-poster test bed simulates tests that provide field data to validate components and test endurance levels, the off-road test track located outside the plant subjects the trucks to real-world driving conditions. It can test vehicles for various applications like mining, construction and defence. Along with different road conditions, the track consists of 15- and 20deg gradient tracks. The next set of gradient tracks will be of 30 and 45 degrees. The test track remains a busy hub as multiple trucks go through the paces through the day.

The Indian economy is in a slow gear and so are businesses like M&HCVs that are directly dependent on it. The emergence of new global competitors like Daimler and Scania is making things tougher for incumbents like Tata. The industry now faces a myriad challenges which include a shortage of trained truck drivers and the prospect of higher diesel prices even as India’s road network has expanded in leaps and bounds as a result of the prime minister’s Golden Quadrilateral project. For an economy that grew five percent last year, investments in roads and infrastructure will give the CV industry a much-needed stimulus.

But for now, it is time to uncork the champagne at Tata Motors. The two- millionth truck rollout at Jamshedpur strikes a positive note. Interestingly, the first truck from this plant had 1313 as its registration number. And in 2013, the plant rolls out the two millionth. Thirteen seems to be special for Tata Motors, Jamshedpur.