What it takes to be a Deming Prize winner . . . twice

Winning the Deming — the Oscar for total quality management — is a huge achievement in itself. Ashok Leyland’s Pantnagar plant bagged the award in 2016 and the company did an encore this year with its Hosur Plant II. Winning the Deming Prize — the Oscar for total quality management — is a huge achievement in itself. Ashok Leyland’s Pantnagar plant bagged the award in 2016  and the company did an encore this year with its Hosur Plant II. Autocar Professional visits the award-winning facility.

It’s said that any profound crisis either breaks or makes a person or, for that matter, a company. Commercial vehicle manufacturer Ashok Leyland found itself in a similar situation in 2012-13 when it was experiencing one of its most turbulent years. At the time, even after making huge investments in increasing manufacturing capacity, developing new products and R&D, the company was seeing rapidly falling sales, losing market share and its profitability taking a beating. 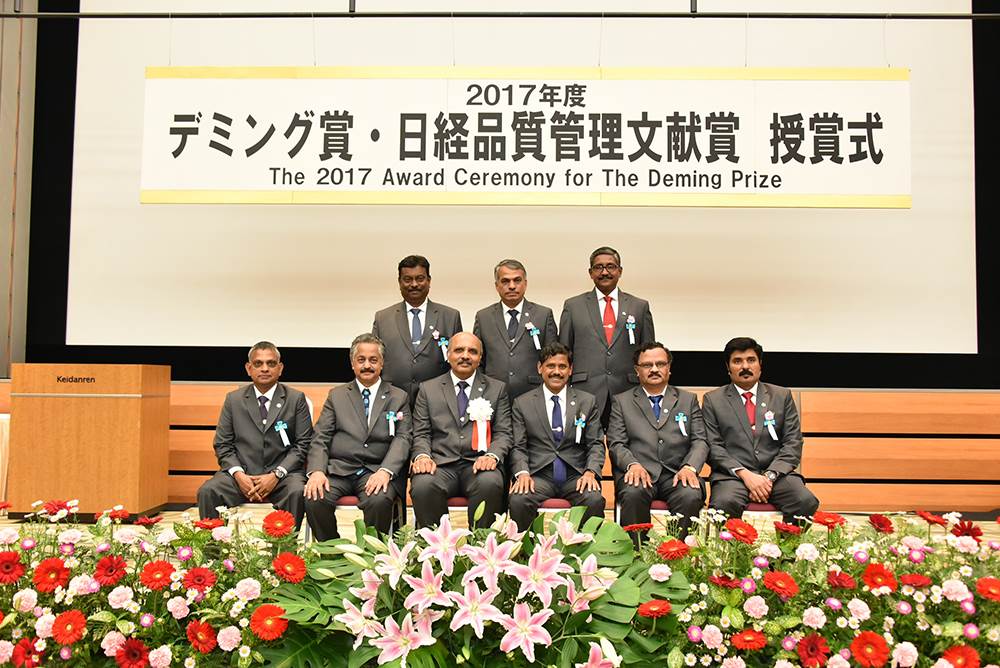 “It was a massive challenge to turn around the business and we needed to implement a complete re-look to bring about real change. We concluded that in such a scenario incremental changes wouldn’t make a sweeping difference. Something a lot more transformational was necessary,” says Harihar P, senior vice-president, Manufacturing & Project Planning, Ashok Leyland, who heads all the company’s six plants in India. 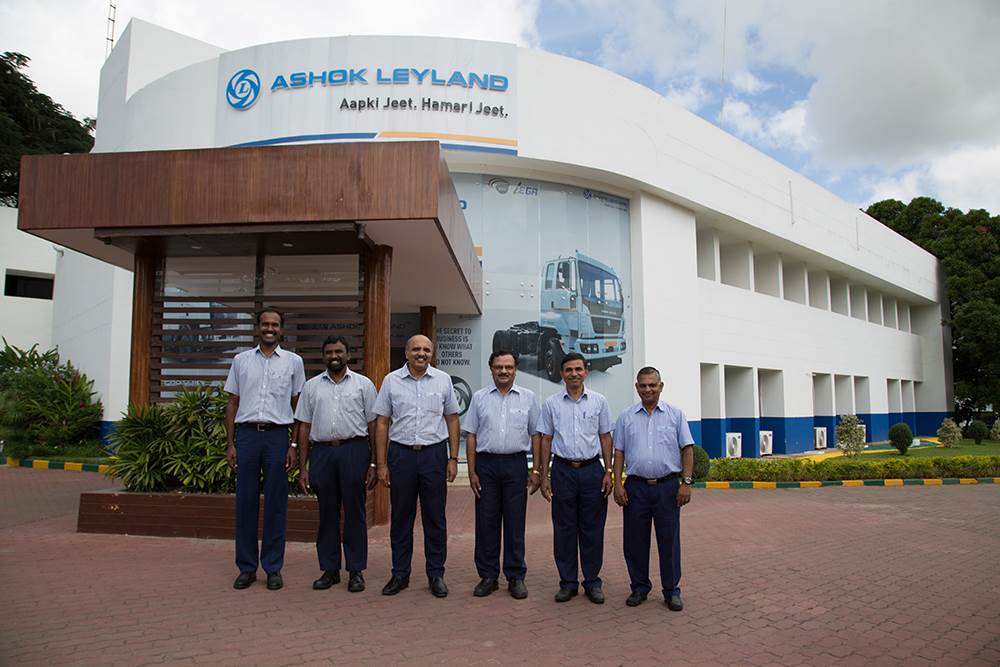 Seized of the urgency to bring about a sea change in all activities, the company, which traditionally has been more tilted towards European processes and technologies, decided to embrace proven Japanese total quality management (TQM) practices. This was easier said than done though. Five years ago, with annual production of 50,000 M&HCVs and 15,000 buses, Ashok Leyland ranked No. 17 among global truck manufacturers and sixth in the global bus OEMs pecking order.

Tough times call for tough measures and the company came up with a strong vision statement for the year 2020 – enter the global Top 10 in M&HCVs (above 7.5T) and the global Top 5 in heavy buses (8 metres and above) in volumes. Once the vision was crafted, the management decided to embrace TQM fully to leverage and achieve the vision and longer-term business objectives. 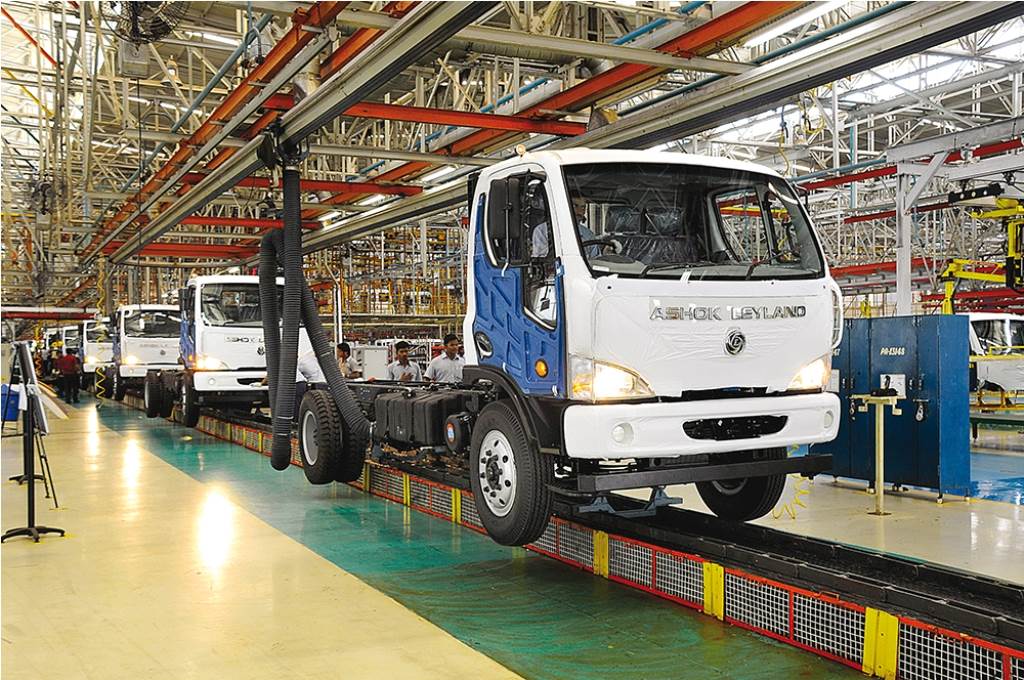 Modern Pantnagar plant, which rolls out the Boss and other HCVs, won the Deming Prize last year.

Fast forward to 2017. Ashok Leyland is on the upswing, not just gaining market share but profitability too is at an all-time high. In FY2016-17, it sold 133,264 CVs for a market share of 18.66 percent including a fair amount in the profitable M&HCV segment. What led to the remarkable turnaround is the unstinting focus on quality, which has paid off handsomely. In November 2016, Ashok Leyland’s Pantnagar plant became the first truck and bus plant in the world and also the only CV manufacturer outside of Japan to bag the Deming Prize, one of the tallest awards for TQM worldwide and considered the Oscar for quality manufacturing. Now, barely a year later, in November 2017, its Hosur Unit II plant bagged the Deming Prize again, making Ashok Leyland the sole CV maker outside of Japan to achieve this feat two years in a row. 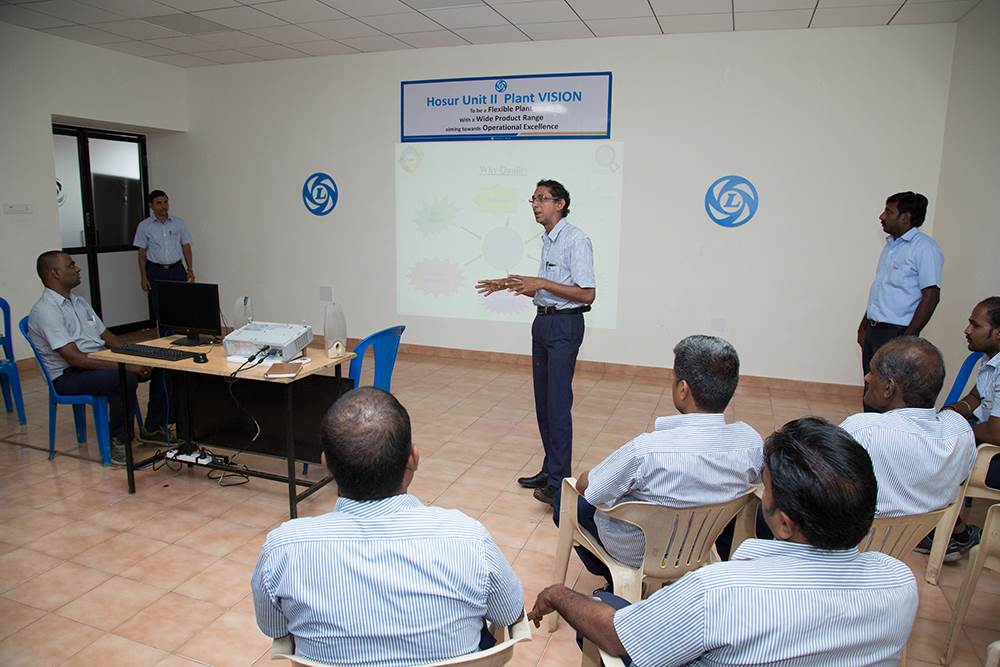 Constant training and engagement keep staffers upbeat and delivering their best at all times.

Commenting on the latest recognition, Vinod K Dasari, managing director, Ashok Leyland, said: “The Ashok Leyland brand stands for quality. Our endeavour is to achieve the best quality in everything that we do. Winning the Deming Prize consecutively for our second unit is a testimony to our efforts and our belief. All of us at Ashok Leyland are very proud to have achieved this. Delivering quality has been an integral part of our brand promise of ‘Aapki Jeet, Hamari Jeet’ and we will continue to raise the bar for ourselves and the industry. This is indeed a big milestone in our journey and adds another feather to company’s achievements in delivering industry firsts.”

It may be recollected that Vinod Dasari won Autocar Professional's Man of the Year 2016 award for driving a slew of strong restructuring initiatives across Ashok Leyland's core and non-core operations, helping transform the company into a lean and aggressive manufacturer with global ambitions.

Ashok Leyland has six manufacturing plants, the oldest being in Ennore, near Chennai, which began operations in 1948. The youngest is the Pantnagar plant which opened in 2010 and won the Deming Prize last year. 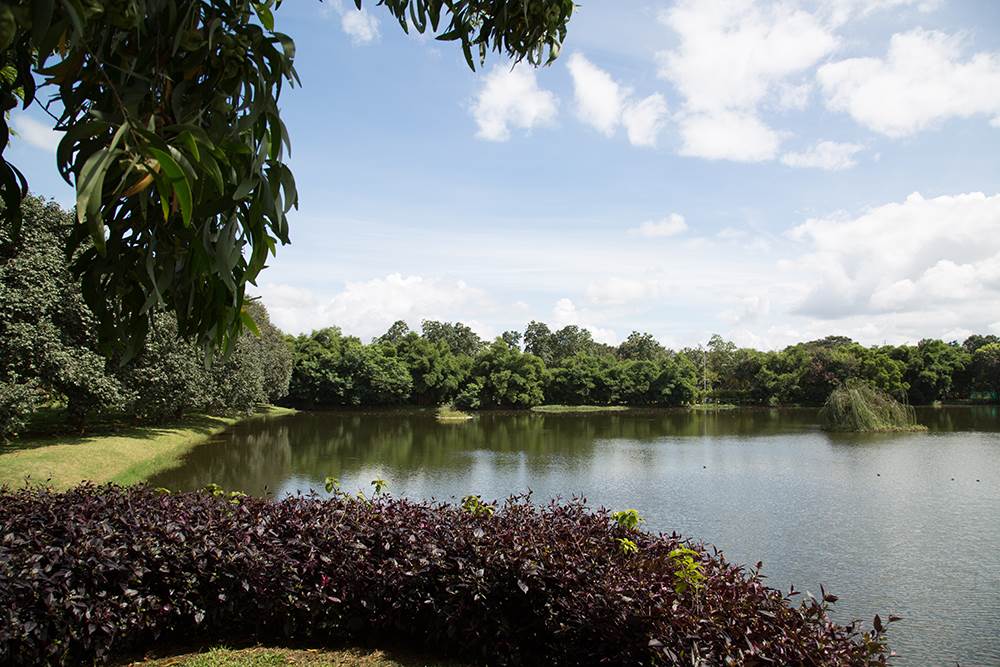 Forty percent of Hosur Plant II, which is spread across 230 acres, is nestled in the lap of nature.

As is known, the selection procedure for the Deming Prize is a very intense and time-consuming effort both for the company and the examination body. The Deming Prize Committee views the examination process as an opportunity for ‘mutual-development’, rather than an ‘examination’. The applicants are not provided with any criteria or issues to be addressed. They are expected to identify and address important issues based on the business objectives which in turn allow quality methodologies to be further developed. Every factor such as the applicants' attitude toward executing (TQM), their implementation status and the resulting effects are taken into overall consideration before the final winner is decided.

Ashok Leyland decided to go with one plant at a time for the stringent Deming examination. The Pantnagar plant was selected simply because it’s the youngest of modern machines. The Hosur Plant II though is 23 years old and, following traditional methods of manufacturing, posed a challenge in terms of absorbing rapid change. 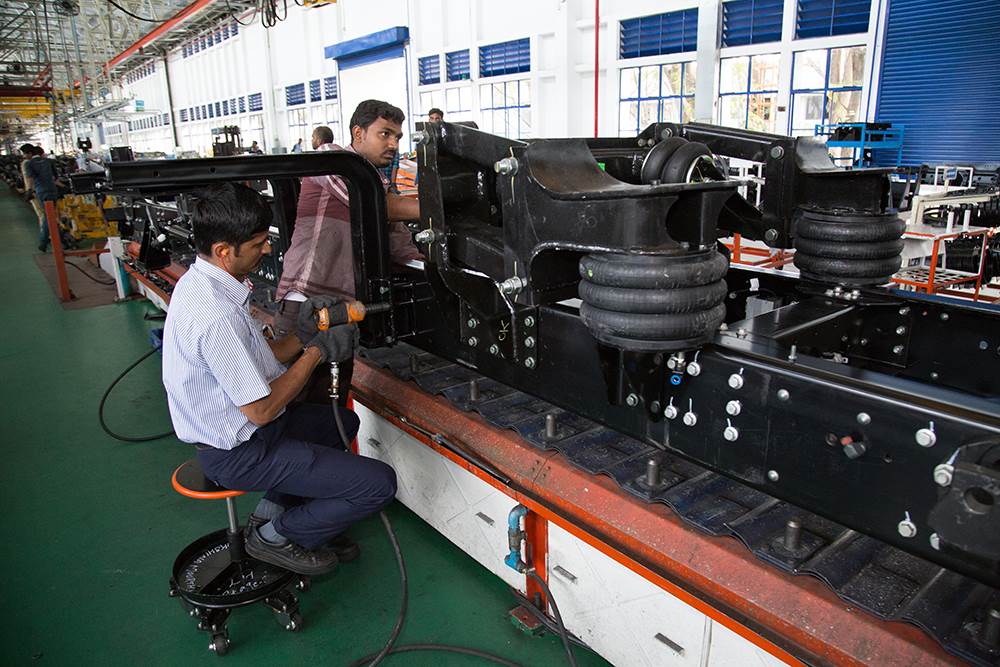 A typical Ashok Leyland M&HCV consists of between 300-400 parts sourced from vendors across the country. Lift axle assembly in progress on a chassis.

Hosur Plant II, which opened in 1994, primarily produced M&HCVs. Once the company entered the LCV segment in 2011, production was expanded. Today, the plant has capacities of 56,000 M&HCVs and 65,000 LCVs per annum. This essentially means Hosur Plant II makes the Ecomet, U-Truck and Captain, defence vehicles, and special application trucks ranging from 2.5 T to 49T and is the only such plant in India. Spread across 234 acres, it is segregated into vehicle assembly shop with three lines – one line dedicated to LCVs and two for M&HCVs. A key highlight is that 40 percent of the plant site is totally green.

As part of the TQM journey, a detailed diagnosis was first carried out which identified flexibility, production of a wide product range and operational excellence as key objectives of the plant. These were converted into strategic goals and targets set. The Hosur Plant II team visited some Deming winning companies like Lexus in Japan to find out how they followed different TQM practices. They also visited plants in India for cross learnings. Rear axle along with suspension being integrated onto the chassis. This specific unit is going to be the foundation for this Ecomet 1212 model.

Detailing the approach taken by the plant towards TQM, C Unnikrishnan, vice-president – manufacturing (Hosur), says, “Once the objectives were set up, five cross-functional management (CFM) teams – delivery management, new model production, quality assurance, cost management and human resources – were set up. Every CFM had a leader and selected team members from different functions. That leader arrived at cross-function management strategies.”

Implementation of TQM practices across the plant has brought about real change in the culture, people mindset, improving problem-solving capabilities and the overall involvement of the team, thus helping the plant to improve rapidly. 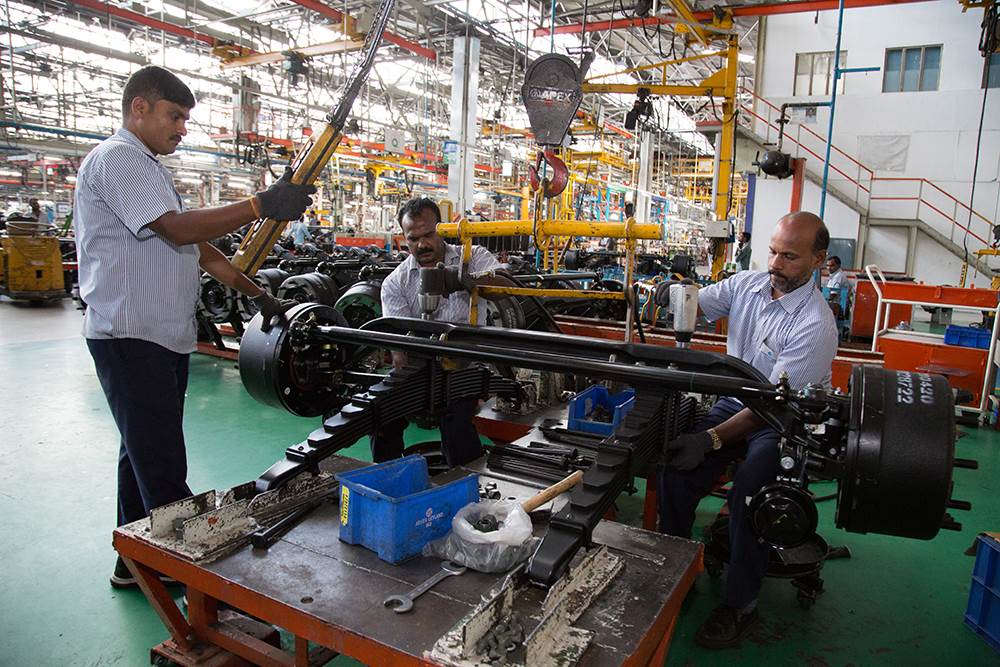 Front axle assembled with springs at a sub-assembly station. There are 25 stations on the assembly line with each station taking 10 minutes.

With TQM in place, Hosur Plant II has improved significantly across various parameters including new model readiness, deliveries, the performance of products, defect reduction, business process, better-aligned business, improved teamwork through cross-functional management,  and increased motivational levels. At present, the Hosur Plant II rolls out 200 M&HCVs and 210 LCVs each day on a two-shift basis. It contributes US$ 800 million (Rs 5,053 crore) worth of production with nearly 24 percent of sales turnover for the company.

“After receiving the award in Japan, the Deming Prize chairman remarked that Hosur Plant II has implemented some systems that are almost similar to the Lexus plant. Although Lexus makes luxury passenger cars and our plant produces commercial vehicles, this is a huge recognition for us, that an Indian company has been able to achieve the world’s best manufacturing practices,” sums up a proud Unnikrishnan. Hearty congratulations!