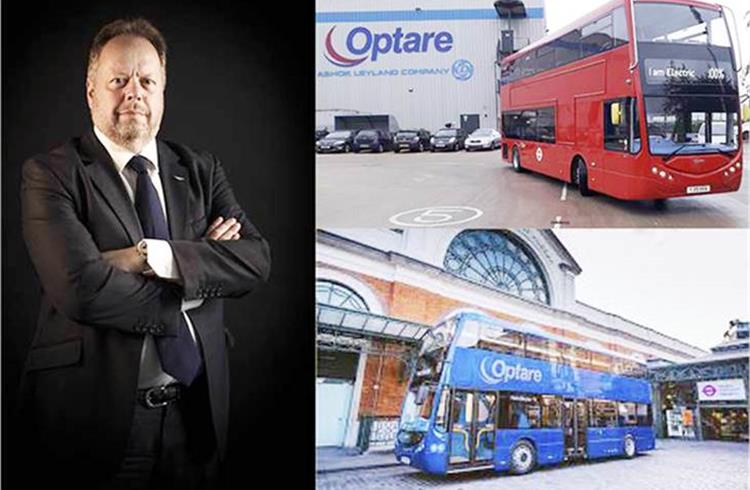 Andy Palmer recalls a recent town hall meeting with his team members where he made it amply clear that he did not care if they were “male or female, Indian or English, old or young”.

On the contrary, says the Executive Vice-Chairman and CEO of Switch Mobility (the electric vehicle arm of Ashok Leyland), his top priority is to create a meritocracy where “the best will always come to the top and where you reward people on their abilities and not on their ability to be political”.

Hence, the motto at Switch Mobility essentially boils down to less talking and a “more action” kind of environment which “means rewarding people for doing a good job”. It is not just talking about what they are doing and it means taking risks on people.

“And I think that is essentially describing a startup which is just a sort of much more energetic place to work. So, hopefully as a result of that, we are going to get the opportunity to recruit some of the best people around,” says a confident Palmer who is fondly known as the Godfather of electric vehicles due to his pioneering efforts in launching the Nissan Leaf many years ago.

The goal is for Switch Mobility to essentially become “the sort of centre of excellence” for batteries and electric vehicles for Ashok Leyland. “In that sense, hopefully, you know leadership can move around as well and I see only positives going forward,” he adds.

From his point of view, the key is to be open in order to create a culture within the company that is agile and can teach quickly to outside influences. And that is not always easy inside big car companies — “to be honest” — which can sometimes be quite close-minded, continues the veteran of Nissan Motor and Aston Martin.

However, the idea of this “carveout from Ashok Leyland” and creating a certain arm’s length is to allow Switch Mobility to develop its own personality. In turn, it is more akin to a startup with the benefit of “the sort of legacy” experiences.

Palmer is also pleased that there is also some momentum happening now with hopefully the worst of Covid behind humanity and life getting back on track albeit with its share of challenges like the present Russian onslaught in Ukraine. It was quite difficult building a company, though not from scratch because “we had Optare on one side and Ashok Leyland EV on the other as a division”.

Yet, putting them together during Covid was quite tough but “I would say it is starting to come together” in the last few months. The entity in India is now fully formed and is part of the global structure. There are already about 200 vehicles on the road in the United Kingdom and orders have come in from state transport corporations in Bengaluru and Chandigarh back home in India.

“So now we are starting to think about how we get other orders outside of the UK and India and into places like Europe and Japan. Of course, there is the electrification of the LCVs (light commercial vehicles) also coming so that will be the main theme of this year,” says Palmer.

In many respects, he adds laughingly, it is “really great to be able to run without the pressure of having everybody looking over your shoulder every quarter”. The benefit of working within the Hinduja group is that they “give you time to mature the business and for that I am eternally grateful because I think what we get is something that is really robust”.

According to Palmer, the interesting and unique thing about Switch Mobility is that it has a strong foot both in India and the UK which is essentially ensuring in its kitty the best mix of the East and  West. This includes the understanding of the products that are coming from India, the experience in Africa and Southeast Asia combined with the experiences of the UK and eventually Europe.

“I think we are quite unique in being able to bring those two together and get both high degrees of commonality in product but, more importantly, explore the necessary differences between the vehicles,” he says.

For instance, Europe does not get monsoon conditions which means “there are things like” the axle needing to be in the centre of the vehicle in India, whereas it is on the hubs in Europe. Knowing those things: knowing the ramp angle differences because of the road conditions, knowing the step height needs “because in India, you sometimes use a platform”.

It is here that Palmer believes “we are unique in understanding those two very different types of operating conditions, and I think that is going to be our main differentiator as we move forward”. It also explains why he is busy building competencies within Switch Mobility to be future-ready.

“We move towards a much more common architecture around the electrical system, which for example, allows us greater harmony in the battery choices we make which massively drives down the bill of material,” he explains.

Hence, it is a benefit not only to the cost of goods sold in Europe but also those sold in India. So to get people motivated about working in this environment, “you have to be able to demonstrate the benefits…and the benefits is what we call the democratisation of net zero”.

Palmer reiterates that India is key and the capability within Switch Mobility is key too. “It is a jewel-centered company in many respects. Yes it has its headquarters in the UK, but much of its technical capability exists in India.”

So India serves India — “that is clear and easy” — and serves certain export markets, particularly higher durability markets. But then really importantly, India serves “our capabilities in Europe” from a point of view of parts supply.

Palmer then reminds you that he knows what he is talking about, “So I am aware that is possible because when I was in Nissan, I was responsible for building Nissan in Chennai and we exported the Micra from Chennai to Europe. So I know that I can get world-class quality in India and I also know that India is probably the lowest cost country in terms of parts supply for a variety of reasons.”

Therefore, making common in many respects the key components between what is built in India and in Europe is the big benefit in this business model. By doing that, “we can see India” then supplying parts to Europe and, therefore, “helping us” to bring down the cost of all the vehicles in Europe and fulfil “this mission of democratisation”.

Palmer then refers to the mantra of partnerships which is the core of the Hinduja group and echoes his own sentiments on the subject which also fit in with where the industry is today. Much of the core engineering is going to be done in India, he adds.

“Normally the way that you construct engineering for any kind of automotive company is that you have a core group of engineers that are looking at the technology. So your battery specialist is there, your motor specialists are there and then on the outside you have your application engineers (who tend to be market-specific),” he elaborates.

Much of that central group — or core engineering — is basically being developed in India because, in many respects, it is easier to find the skill base here. “I won’t say it is easy, but we have been able to build out a really interesting group of individuals, and it is growing by the day,” says Palmer.

Switch Mobility will essentially focus on the last mile segment and on electric vehicles. “That is not to bemoan alternatives…we just simply think that for vans, light trucks and buses, the EV is the best solution,” he adds.

The company will also tend towards the high energy density battery…in other words, cutting edge battery technologies “rather than the cheap and cheerful LFPs” (lithium iron phosphate batteries). Simply put this means, “we tack in a slightly different direction to the Chinese in that respect”.

Whilst on this subject, Palmer acknowledges that the role of the engineer has changed dramatically. These days, there virtually isn't a single mechanical mechanism that does not have electronics and software attached to it. This only means that companies need to create engineers that are more generalists.

Battery technology, for instance, has much more to do with chemistry and he has had to retrain himself on chemistry since he is chairman of a battery company. “So I think we are looking at much more generalism in terms of the type of engineers that we are looking for and and probably a continuous education. Of course, for the older engineers, there is also the need to retrain to some extent,” says Palmer.

Switch Mobility recently announced that it was setting up a manufacturing and technology centre in Spain which would see investments of €100 million over the next 10 years. This will be commissioned in the province of Valladolid and will have two modern lines which will roll out buses towards the end of this calendar. The Indian arm will doubtless be involved with this exercise where its capabilities will be used optimally.