For the Formula 1 championship, DHL is the preferred logistics supplier, mainly due to its knowledge and expertise in motorsports which it started servicing around 25 years ago. 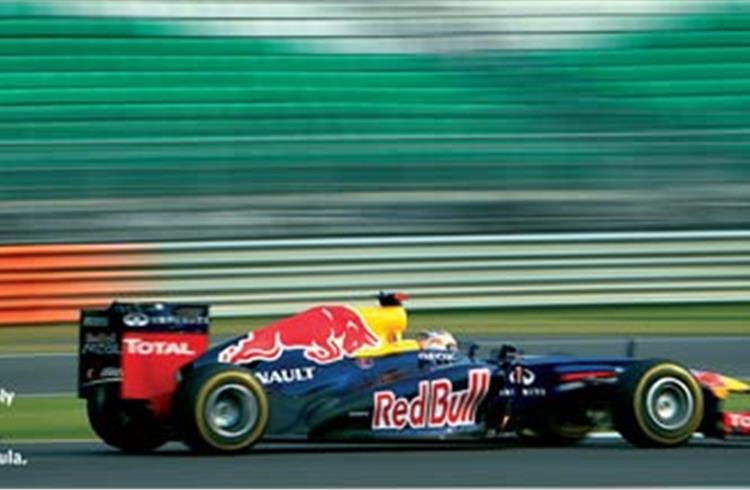 The evening of October 28 saw Indian GP winner Sebastian Vettel pop the champagne, inching closer to winning the title with three races to go. While he had jetted out of India lightweight, his team had immediately busied itself carting close to 30 tonnes of equipment, which travels by sea, land and air. Remember, the teams are completely self-sufficient – they bring their own refrigerators, cables, power generators, their cars of course, and even water bottles! In fact, by October 30, virtually all the equipment had arrived in Abu Dhabi, the venue of the next Formula 1 race on November 4, courtesy DHL.

For the Formula 1 championship, DHL is the preferred logistics supplier, mainly due to its knowledge and expertise in motorsports which it started servicing around 25 years ago. It also has a tie-up in place with F1’s global management to transport racing equipment for all participating teams worldwide.

DHL has specialised units in England and Italy, which organise global transportation of F1 equipment both for test sessions and for races. A 24-hour service at the racetrack also offers services for urgent shipments, customs clearance as well as shipment of hazardous goods and temperature- controlled items. But the basic planning for the racing season is finalised at the end of January, with dates for the test sessions fixed and specific requests dealt with later on.

While most of the F1 equipment travels by air, heavy and less-expensive material like cables is shipped by ocean freight. Teams have three to four identical sets of 40-feet sea containers containing heavy and interchangeable items of equipment for overseas races and these are shipped around the world on a rotational basis.

Air freight leverages about five to seven 747 cargo aircraft with an average of 600 tonnes being moved for each race, varying in quantity on the race and requirements of the teams. For the Indian Grand Prix, six cargo 747s were used. For European races, an average of 100 trucks are employed to move the teams and their equipment (which typically includes two cars), as well as the hospitality and broadcast materials. One aspect however is standard – the equipment used in races worldwide is similar, irrespective of the country. Typically for a GP, the on-site planning process starts nine days before a race. But in terms of logistics, a racing weekend means the sensitive freight arrives at the racing venue around seven days before the race, packed in boxes or in temperature-controlled containers.

After the race, during the night from Sunday to Monday, the entire freight is loaded again for transportation, either to the next racing circuit or back to the team’s headquarters.

For the recent Indian GP, DHL roped in around 150 to 200 people right from the start to finish for the logistics operations for the transport of 24 F1 cars to India, according to Pier Luigi Ferrari, deputy MD (Motorsport), DHL Global Forwarding (Italy) SpA. DHL had also tied up with the local F1 organiser, the Jaypee Group, for facilitating arrangements for the race including customs clearances and availing other facilities.

For the Indian GP, the long-term planning had begun a year ago. Once it was curtains down on the Korean GP (October 12-14), all material and equipment was delivered to New Delhi in the very next week, says Pier Luigi Ferrari. Typically, F1 cars are dismantled with their front and rear wings, steering wheels, rearview mirrors and side-pods removed. The bottom and sides of the car are encased in wooden panels while at the rear, a bumper protects the gearbox. A specially designed cover safeguards the steering and front of the chassis. The largest part includes the monocoque (carbon fibre up to 60 layers in thickness) with the smallest part being a screw with a diameter of 1.5mm.

Some parts such as a front wing or underbody arrive at the track at the very last minute for qualifying, with deliveries made within 24 hours tapping express flights. On-board couriers accompany urgent deliveries on the trip to streamline customs clearances and to enable transfer by helicopter direct to the paddock.

Special care is taken to transport the high-voltage fuel for the cars, with special fire-proof 50-200-litre canisters. While in transit, the fuel has to be protected from extreme temperatures such as the heat of Malaysia or cold of the North Atlantic.

While Ferrari admits that a full integrated system was toed in India, similar to any other F1 race globally, he found Indian regulations a tad more difficult and the documentation more complicated to comprehend. Problems also arose on differing interpretations of temporary importation procedures and time to operate. “For instance, temporary operations are not really interpreted in India the way we interpret them, and that can create issues while documentation is also more complicated than in other countries, but is reasonable,” clarifies Ferrari.

DHL imports and re-exports material and equipment during the GP week with an hour or two factored for customs clearances and international documentation in case of temporary importation. Though duties are not chargeable on F1 imports due to their temporary status applicable on shows or exhibitions, consumables like fuel are taxed.

While F1 is still in a nascent stage in India, DHL's motorsport chief is keen to see rules being simplified for import of F1 materials in future.

What do you consider as your USP in F1 logistics solutions?

We have the biggest knowledge of providing F1 services as we have staff dedicated for motorsports for 25 years that gives us a deep advantage in terms of capability to interpret the needs of the customers in real time.

We provide logistics support for 20 Grands Prixs in a year including the European GPs and those held in Australia, Malaysia, USA, Korea, Canada, Brazil, India, UAE, Singapore and Japan. This involves managing 600 tonnes for each race, with 40 containers of race equipment, spare parts and supplies in and out of every race.

Does DHL tie up with suppliers in the country where the race is held for local support?

We use the services of companies proposed by the local organiser for renting forklifts, operators, and manpower. These operate under the supervision of DHL but DHL itself does not have any direct tie-up with suppliers. The organiser organises the race and suppliers.

How is the global F1 scenario evolving?

The quantity of material we shipped 25 to 30 years ago for motorsports is 10 percent of what we ship today and the packaging is absolutely different. Cartons form one percent of our packing with 99 percent including other kind of packaging that is used in exhibitions, among other things.

Every year it is changing and we have to plan everything with the local organiser, F1 management and television besides taking care of customs in transit and at destination. Logistics today is evolving in a big way with organisers more careful on cost and time. There is fantastic development of technology which enables a big opportunity to ship everywhere in the world but the challenge is to maintain logistics solutions on time. The next challenge is exploring another country or another race for us.

How do you see the growth of Formula 1 in India?

There are different rules at present in India compared to other countries for providing logistics support for F1 races. All countries have rules; for instance, Europe gives particular attention in respect of quarantine. Distance and storms are another complication in some countries for providing logistics solutions. In India, we may be providing more logistics solutions in future, as motorsports and racing are growing here. Even our local office can extend support to them later on. We want the F1 passion to grow globally with 300,000 people coming to India next year for the Grand Prix.