Oil major banks on its clean PurePlus technology that converts natural gas to crystal-clear base oil, to mark a significant step-change in the evolution of engine oils. Amit Panday visits Shell's R&D facility in Qatar. 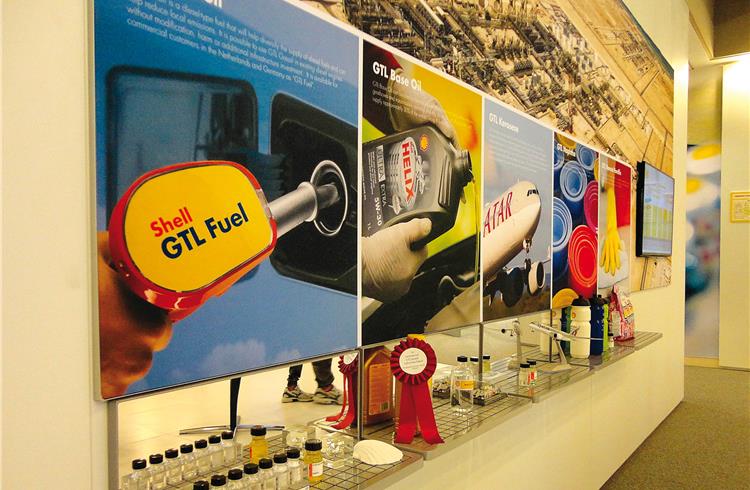 The Shell Group banks on its clean PurePlus technology, a process that converts natural gas to crystal-clear base oil, to mark a significant step-change in the evolution of engine oils, and also to fuel its growth across economies. Amit Panday visits Shell's R&D facility in Qatar.

The Netherlands-based oil multinational, Shell Group, is bullish about its range of products made from the gas-to-liquid base oil. The company has named this process of converting the natural gas to crystal-clear liquid (base oil) as PurePlus technology. While this process results into the extraction of base oil (liquids state) with virtually none of the impurities found in the crude oil, the product also provides superior viscosity, friction and volatility performance when compared to a number of the conventional base oils used in making lubricants.

This base oil is used by Shell in manufacturing lubricants for passenger cars, two-wheelers and also commercial vehicles. Company officials say that while the base oil composition majorly remains the same, the additives vary for various applications. Shell’s PurePlus technology, thanks to its GTL base oil, offers extended engine life and cleanliness, enhanced performance, low maintenance costs, better fuel efficiency, reduced oil consumption.

Talking to Autocar Professional at Shell’s R&D facility at Qatar Science and Technology Park, Doha (Qatar), Kin-Mun Leo, global motorcycle oils technology manager at Shell (Shanghai) Technology, explained: “If we look at the base oil alone, it comprises of 75-90 percent of any engine oil formulation. Our gas-to-liquid base oil, which is extracted from natural gas, is 99.5 percent pure compared to other base oil formulations derived from crude oil. Their performance (traditional base oils) is nowhere near from that of the GTL base oil. One of the reasons is that the GTL base oil has an over 80 percent concentration of isoparaffins (a high-purity hydrocarbon solvent), which are a very good components for engine oil. Other advantages of this GTL base oil are that it has a very low volatility loss and good co-fuel properties.”

According to Leo, the GTL-derived base oil has a very high viscosity index. It is to be noted that a low viscosity index (of engine oil) would mean that viscosity would change with a very small change in the temperature. “That means if my engine is cold, my oil would be thick, but when the engine warms up, the viscosity of the oil drops.  Any engine oil which has its viscosity changing so dramatically is not good for the engine. Also, the design of the engines cannot cope up with such changes. Ideally, you want to have oil that has minimal changes,” emphasised Leo.

The GTL base oil is blended with additives, the selection of which is another crucial step in order to produce an engine-friendly lubricant.

Interestingly, Shell Advance Ultra with PurePlus technology, the engine lubricant for two- wheelers, was extensively tested on one of the most commonly sold 125cc Honda motorcycles in the Asian region. The tests had these models covering 13,000km, giving a final green signal to the on-road usability and performance of this product.

“We tested the product in one of the most popular commuter bikes in Thailand (125cc Honda) for 13,000km. For the first 1,000km, we ran a cycle of feeding and flushing the Shell Advance Ultra to fully replace the factory oil from the engine. And then the remaining 12,000km, the bikes ran on our product. The cycle had only two replacements of engine oil, each at the end of 6,000km. That’s how we measured the various indices,” he elaborated.

Further Leo mentioned that “we have observed that conventionally bikers change their engine oil every 3,000km. We tested Advance Ultra for 6,000km without any problems. However, I want to stress that we are not encouraging bikers to replace engine oil after 6,000km. Rather, we encourage that they must follow the owner manuals provided by the respective OEMs. So while we are not advocating that you change our oil only at 6,000km, we are just highlighting the strength of our product, thanks to the stable viscosity of our GTL base oil.”

Shell is also working on blending the GTL base oil with components to come up with diesel engine oil product. 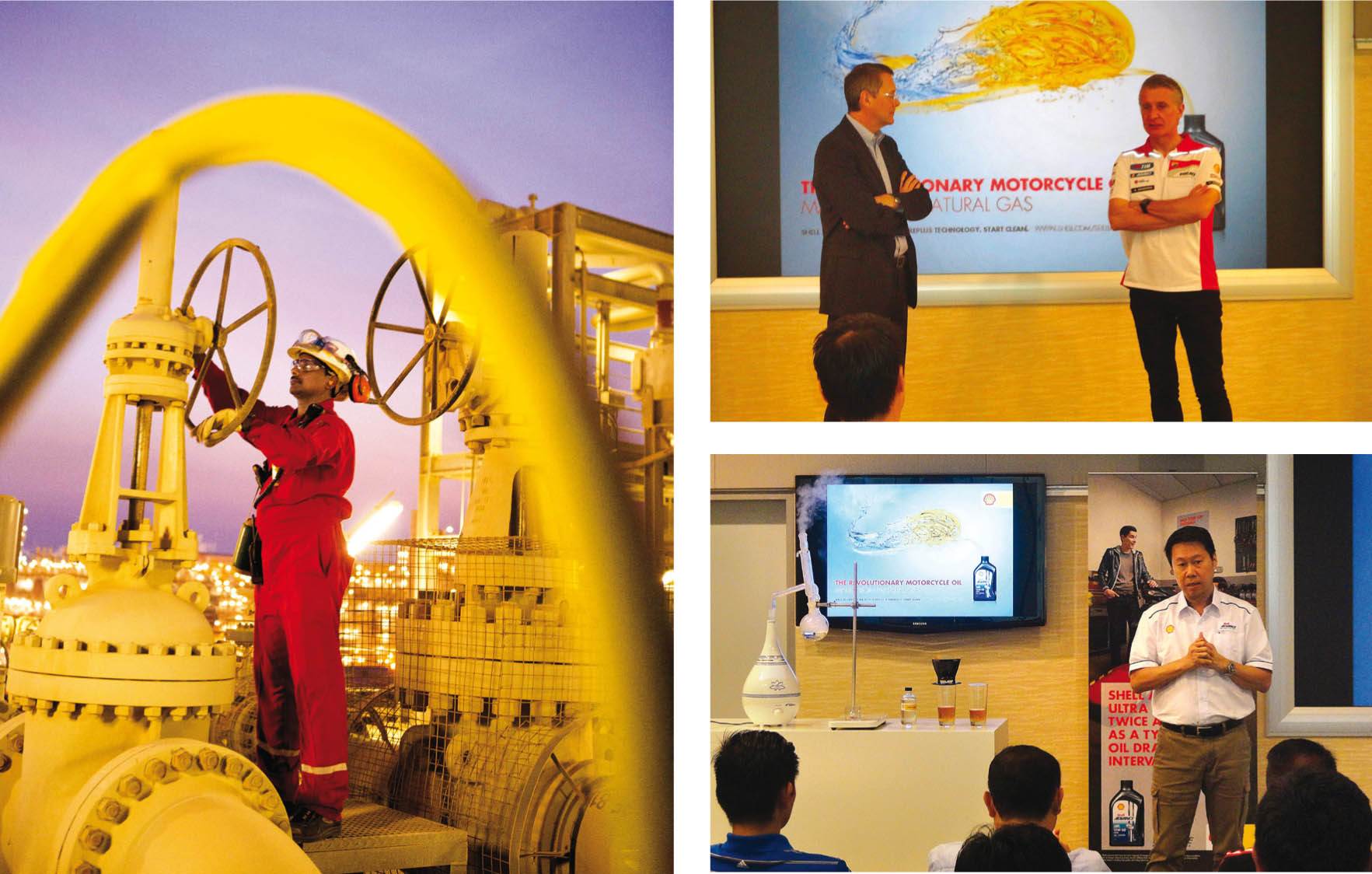 THE SHELL AND BMW STORY
On the lines of its relationship with Ducati and Ferrari, the oil major has recently (November 2014) entered into an exclusive relationship with BMW AG, wherein Shell becomes its only recommended global supplier for aftermarket engine oils (across BMW brands covering BMW, BMW i, BMW M, Mini and BMW Motorrad).

The relationship means that Shell will produce and supply BMW’s branded engine oils across BMW’s network of more than 3,500 dealers in over 140 countries. These engine oils will meet the latest BMW engine specifications and are underpinned by Shell’s PurePlus technology.

“This is a unique story for Shell. I think one area that we will be developing a lot in the near future is the storyline with BMW. So the message there would be that we have an exclusive relationship with BMW, where they say only use this product. That does mean that the product is good enough for the BMW vehicles,” said Andrew Hepher, general manager, B2C marketing, Shell International Petroleum Company.

EYEING INDIA BUSINESS
Talking exclusively to Autocar Professional in the context of discussions with Indian two-wheeler OEMs, Hepher said, “We are talking to several OEMs in India. India is a very big market with a significant chunk of volumes if you look at the global share. It is very competitive market where Castrol has a very strong position, which they built over many years. So, we at Shell, need to find ways to compete, but compete smartly. It is very interesting that in the Indian market, we have exclusive relationships with six companies but more on the B2B side.”

While the company is a strong player in North America, China and other countries, it is eyeing growth prospects in emerging nations as well. “We need to get our growth trajectories in markets like Brazil, Indonesia, India, and Russia back on track. We can do that to a degree and the markets also need to recover. It is a challenge to sustain growth in the developing markets because of political tensions, currency issues, economic woes, and many others,” he highlighted.

The company had launched the PurePlus technology in India for bikes (Shell Advance Ultra) at the India Bike Week in Goa earlier this year and for cars (through the Helix brand) in September-October 2014. The lubricant product for commercial vehicles with this technology is expected to be introduced soon.