In an advertisement that has been telecast round the clock during the ongoing elections, two middle-class, well-dressed males get astride a motorcycle and head out to some late evening outing. 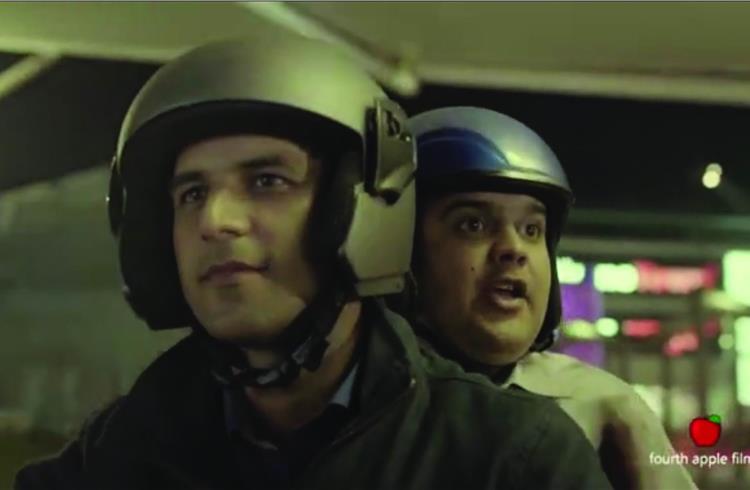 In an advertisement that has been telecast round the clock during the ongoing elections, two middle-class, well-dressed males get astride a motorcycle and head out to some late evening outing. As the pillion rider hops on, he makes a casual comment on who he votes for saying he has 'always' voted for that person because he is ‘on our side’.

That theme plays out as the duo ride on with the pillion trying to interest the rider in a host of ‘personalities’ that he seems eager to meet.

Pointing to milling crowds outside a shop window watching a cricket match, he wants to get down and watch but gets rebuffed by the rider who asks, miffed, why should we do so unless “they are on our side?”

The duo ride on and the baby-faced pillion (indicating innocence) notices his favourite actor exiting a shoot, and wants to halt. Again, more visibly irritated, he gets reprimanded: that it is only worth it if the person is ‘apne taraf ki’ as the line in Hindi goes.

Finally, the grim-faced rider holding out resolutely sees a hoarding of a girl called Neha (probably a singing contest participant); his face lights up for the first time in the ad, saying she will definitely win because ‘she is on her side’.

Now getting his chance to hit back, the pillion says sternly: "Talent isn’t something to be dismissive about. But the rider has his retort 'What about elections, the biggest national talent contest?' This gets the chubby-faced pillion rider thinking.

As the ad, all of 49 seconds ends, we get to see the name of the green-coloured bike on the right upper side of the screen: HF Deluxe Eco motorcycle. This ad, created by JWT, ran in six languages apart from Hindi.

Hero MotoCorp has very cleverly used the elections to give its products a mass connect and encourage thinking anew. Earlier as a joint venture partner with Honda, this correspondent remembers vividly the camera zooming in on the Hero Honda logo etched on the ground as the cricketer runs into bowl.

As Anil Dua, senior VP (marketing & sales), Hero MotoCorp, said, “India is a young country with almost a third of eligible voters being under thirty. The elections, therefore, is an apt theme to communicate with the youth. Through its tagline ‘Naye Indian ki Nayi Soch’, the new TV commercial on HF Deluxe reflects a confident youthful nation exercising its right to elect its new leaders.”

To different viewers, this particular Hero ad threw up different messages. One said it conveyed the Indian-ness of the Hero brand, another felt that users of a Hero product think their choices through, thus linking clear-headed thinking on electoral choices to a clear headed thinking about products. There is also another message on riding safety. Both the argumentative riders wear helmets, a rare scene that is almost never seen on India’s roads where an entire family on an entry-level bike negotiating bad roads and often treacherous traffic is a typical scene.

Only a handful of companies have used India’s election juggernaut either a backdrop to deliver a message centered on voting. The 'Jaago Re' ads from Tata Tea roped in NGOs to push causes around the election and has done so consistently since 2008. Its latest Power of 49 centered around women’s empowerment given that 49 percent of the current electorate comprise women.