Scania and the promise of the India market

Scania's full-fledged entry into India at a time when the CV sector is in the doldrums is due to the long-term potential the Swedish major foresees here, says Brian de Souza. 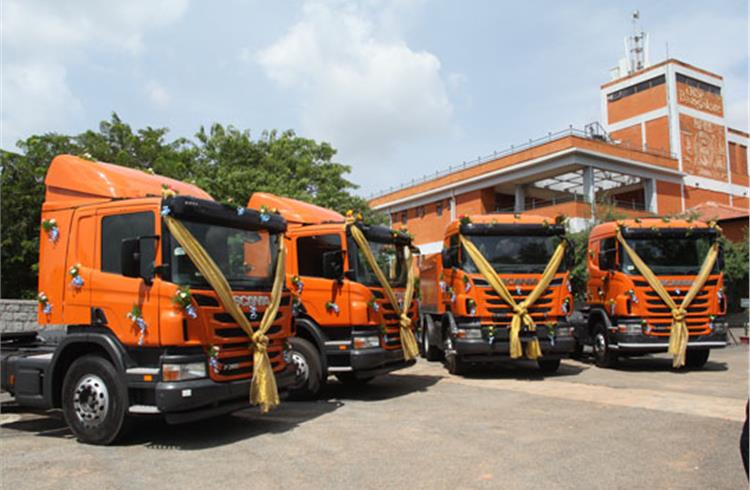 With Scania’s entry, the last of the major CV makers is now in the country. The recent inauguration of its new plant is testimony to the company’s commitment to India in which it is still an unknown brand. However, as a result of the cache that has been created thanks to the entry of Volvo whose buses, in particular, have made a mark for themselves in the inter-city and intra-city segments, this brand image may have a likely rub-off on Scania as it begins its India innings. Scania is already in China where it has had a presence for the last 10 years. While it may be argued that its India entry is late, India was very much in the company’s sight when it inked a quiet marketing JV with Larsen & Toubro, one of India’s most venerable names in the engineering space. The alliance was for the supply of products for the mining and construction fields where local market knowledge and synergies with L&T was expected to be of help. Indeed, the JV sold 1,000 units and will continue to retail its range alongside the products that Scania Commercial Vehicles India will bring in.

Between 2007 and now, Scania has also used the time to gauge the potential of the Indian market which has seen Volvo ink a JV with Eicher to bring in technology that will help make engines for the Swedish major as well as MAN-Force which is now a fully-owned MAN subsidiary. There have also been other entrants in Daimler India Commercial Vehicles (DICV) that has completed a year in India and sees the country as a base for exports with the first consignment of Fuso-badged trucks heading to Sri Lanka.

The entry of these MNC players has had existing Indian players like Tata Motors and Ashok Leyland launch new products, upgrade existing ones and strategise differently in order to retain their market shares in a market that has seen major changes in the Indian CV landscape.

Ahead of the DICV launch in September last year, Tata launched its LX series which was basically a more affordable range of its Prima range in order to woo new buyers. Ashok Leyland has inked three joint ventures with Nissan for three new platforms, powertrain and technologies respectively, investing Rs 2,300 crore. Apart for lining up a top-notch supplier base, DICV has established a state-of-the-art testing track, indicative of its resolve to change the numbers game in its favour. On the buses front, things have been a lot quieter than in trucks but the second phase of the JnNURM announced in the Budget earlier this year under which 10,000 buses will be bought.

Scania's newly opened plant, which it calls a regional product centre (RPC), is its seventh facility worldwide at which it will assemble truck chassis from CKD kits and also bodyworks for them. Similar Scania facilities in South Africa, South Korea, Malaysia, Taiwan, Dubai, and Russia deliver complete vehicles expressly adapted for customers’ individual requirements and the operating conditions peculiar to the respective regions. Interestingly, the one in South Korea even builds its own tipper bodies.

Scania’s India innings kicks off at a time when a time when the Indian CV sector is verily in the doldrums. According to SIAM, the medium and heavy CV sector has seen a fall of 15.32 percent in the first six months of 2013-14 compared to the year-earlier period. CV makers are wringing their hands in frustration as key sectors such as mining and construction bear the brunt of the current economic slowdown.

The industry think-tank is hopeful that the government will give its approval to a score of major large-scale projects that are currently being scrutinized by the cabinet committee on investment. When okayed, it would give a much-needed fillip to the sector and boost demand for both buses and trucks.