Amidst a slowdown, the small sized forging company’s confidence gets turbocharged with its biggest breakthrough as a supplier to the Datsun Go, says SumantraBarooah. 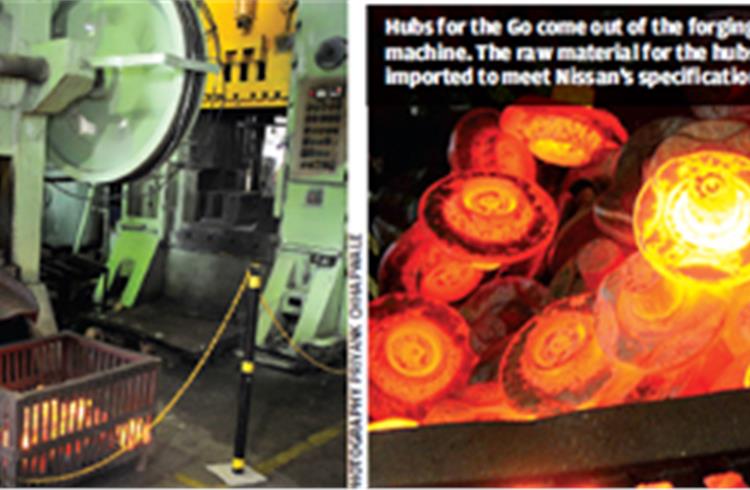 When Nissan’s Datsun brand makes a re-entry with the launch of the Go hatchback early next year, a small forging company’s fortune will take a new turn. The Pune-based Trinity India, which manufactures forged components, owned by the Raymond Group through Ring Plus Aqua, has bagged the mandate to supply wheel hubs for the Go.

Earning Nissan’s mandate is the biggest breakthrough for the unit but it wasn’t easy. “They did not indulge in a price-quotation game. We had to meet a specific price, otherwise we had no chance. When we went, we went with a crisp proposal and that a normal hub design will look like this, and gave four design options. That’s when we feel they felt confident about our seriousness and the capability as a supplier,” says LaxmanKatakkar, CEO, Ring Plus Aqua.

Not only did the team have to showcase its best but also invest in, and install, new equipment for controlled cooling within 35 days especially to meet the requirements of Nissan. “Had it been a year ago, we wouldn’t have been successful in the tech review (by Nissan) because we didn’t have the current engineering team,” says HarshalJayavant, president – engineering businesses, Raymond. Trinity India was acquired by Raymond in February 2012.

Trinity, set up by a team of three technocrats nearly 40 years ago, has built some strong intrinsic capabilities over the years in producing forged components. Its product portfolio ranges from 150 grams to 8 kilograms in weight. It supplies to around 15 OEMs both in India and overseas. For example, it has supplied 20 million hubs and spindles in the past 8-9 years to Ford operations globally, except in Australia. The company says there has been zero warranty claims on them so far. However, Trinity India faced financial challenges to grow.

After the acquisition by Ring Plus Aqua, its financial health recovered. Last year it posted a profit of Rs 2.3 crore as compared to a loss of Rs 6 crore in the previous year, while turnover grew nearly 20 percent from Rs 75 crore to Rs 89 crore. “On the functional level, we hired a lot of people. Ninety percent of the people you see today are new and just about a year old. We have brought in good, young capable leaders at the functional level who could build upon the existing skills,” says Jayavant while explaining the turnaround strategy.

He adds that the yields of the investment made during the past year are yet to come. The investments are being made for Trinity to evolve its capabilities from ‘build-to-print’ to ‘build-to-design’. Currently, the team at Trinity is busy developing 45 new components, many of them for non-automotive applications. Jayavant says that there are 12 engineers responsible for product development today compared to only one engineer last year.

Along with increased focus on product development, there has been some improvement in processes too. An industry veteran with 35-40 years’ work experience in Tata Motors has been hired to improve shopfloor efficiencies. Better processes and a simpler layout have freed up 40 percent of the space in the machine shop.

Ring Plus Aqua is putting its best efforts to build the Trinity business which boasts of some prestigious global customers like Ford and Bosch. A ‘Q1’ flag with the Ford logo proudly greets all visitors to the Pune plant. This flag is given by Ford to only a select set of suppliers which meets its stringent quality norms. ISO 14000 is a basic requirement to apply for it. “Even if you qualify, they will monitor your performance for one full year before they give the flag,” says L Katakkar. Trinity had lost the flag once because of delivery issues. Getting it back required much more effort.

Even as HarshalJayavant and his team put their shoulder to the wheel to put Trinity India in a healthy sustainable growth drive, the company has also begun work on its next acquisition. The target company could be in the Rs 100-300 crore bracket. Overall, the Raymond Group is aiming at growing its auto components business to Rs 700 crore by March 2016.

How do you plan to grow Trinity India which marked Ring PlusAqua’s entry into the forging industry?

This industry is full of small companies. We realised that we cannot compete with them in commodity products. All small companies would be focused on cost and would not like to focus on engineering. For example, what Bharat Forge did (expand into non-automotive business) after reaching aRs 2,500 turnover, we are doing at Rs 100 crore. We are trying to get into a position where an OEM sees our ability to think design, develop, engineer and then deliver. That is what has got us the Datsun business.

What is the PPM level?

HJ: The PPM is well below the acceptable limit of 100.

How much time have you given yourselves to achieve the T500 target?

HJ: In Ring Plus Aqua, we are getting a lot of international business. For an auto component company at these levels, growth is not an issue. Growth is an issue when you are US$2 billion or 3 billion.

At what stage are you in nowfor the next acquisition?

HJ: Not in a very advanced stage. While at this point of time valuations will be attractive, people are not willing to sell. Book valuation is attractive, but there’s no willingness to part at that price. It becomes difficult to convince your shareholders why you are paying more than the book value. We will look at anywhere between Rs 100 to Rs 300 crore.

Today approaching an American or a European customer is not very difficult for an Indian supplier. Fifteen years ago, it was a challenge because people doubted an Indian company’s capability. Today, credibility is not a reason to buy a company overseas. In these times, buying a company in the US is a better option.

LK: After the 2008-09 cycle, they (American companies) have been able to slash costs like anything. Those who survived learned the lesson.

What is the current capacity utilisation at your plants?

HJ: At Ring Plus Aqua, it is now around 60-65 percent. But it comes on the back of a capacity expansion which we did last year. We completed a 25 percent expansion plan in September 2012, from three million ring gears per annum two years earlier, we have gone to 5.5 million in two steps. We are not in a very bad stage compared to two years ago. But we are not doing as good as we thought we would do, because of the domestic market slump. Trinity’s capacity utilisation is somewhere around 45-50 percent.

You must have had to lay off people because of the slowdown?

LK: Currently, we have had some situation like that. We had a good revision check with the union. We could manage. Maybe we will have to look at it if the situation just doesn’t change.

What is your company’s business mix between automotive and non-automotive clients?

LK: By March 2012, we had 11 percent non-auto business. Now it is at 30 percent. That keeps us going. That will remain our focus. We will take it to around 40 percent and then we will decide our future course of action because we don’t want to become a non-auto component company. The non-auto components like chain links, cylinder housings, brackets for off-road vehicles are keeping us going.

HJ: They (some non-automotive components) are low volume. When it is low volume, the supplier or a buyer is also not under pressure on pricing because they are not mass produced (50,000 units or more a year).