Renewable synthetic fuels could be a better option than EVs

If the rising fuel prices are making your fossil-fuel-powered vehicle less viable, wondering if the death knell for IC engines is near, then take a deep breath; the answer lies in the air you breath. 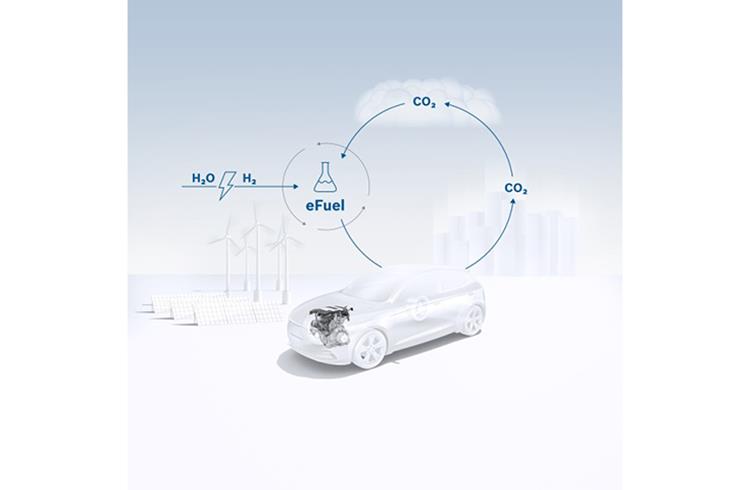 Post the drone strike on the Saudi Aramco oil refineries in Saudi Arabia on September 14, the fuel prices in India have continued to surge to the point that it has reached its highest point (Rs 79.57/litre for petrol and Rs 70.22/litre for diesel) till date for the year 2019. It was in 2018 only when India saw its highest-ever fuel rates (Rs 91.34/litre for petrol and Rs 80.10/litre for diesel (On October 4, 2018)) due to some different geopolitical issues.  An alternative to this dependence on fossil fuel is a desperate need for the common man. One such alternative to fossil fuel that some of the technology and research institutes are pointing to is renewable synthetic fuel.

The Paris Agreement calls for global warming to be limited to 2-degree Celsius above pre-industrial levels, preferably even 1.5-degree Celsius. In order to achieve this, the fossil CO2 emitted by road vehicles will have to be reduced to nearly zero over the next three decades for that to happen. Electromobility will obviously take some time to meet the volume levels of conventional vehicles and it will take even longer to substitute fossil fuel in the commercially heavy and long haul transport systems, such as the aeroplanes and the ships.

Drawing fuel from air
Researchers from Stanford University and the Technical University of Denmark (DTU) show how electricity and an Earth-abundant catalyst can convert CO2 into energy-rich carbon monoxide (CO) better than conventional methods. The catalyst -- cerium oxide -- is much more resistant to breaking down. Stripping oxygen from CO2 to make CO gas is the first step in turning CO2 into nearly any liquid fuel and other products, like synthetic gas and plastics. The addition of hydrogen to CO can produce fuels like synthetic diesel and the equivalent of jet fuel. The team envisions using renewable power to make the CO and for subsequent conversions, which would result in carbon-neutral products.

William Chueh, an associate professor of materials science and engineering at Stanford, one of three senior authors of the paper ‘New route to carbon-neutral fuels from carbon dioxide’ said, “We showed we can use electricity to reduce CO2 into CO with 100 percent selectivity and without producing the undesired byproduct of solid carbon.”

According to the paper, these sustainable liquid fuels could be operated through the existing infrastructure for the current fossil fuels. However, some of the many hurdles that researches are working around are – the device produces too little CO2 molecules after too much of electricity consumption. The paper, thus, lays high hopes on the CO2 electrolysis cell that is based on cerium oxide.

Turning promise to reality
According to Bosch, the production process is viable but capacity is lacking. It claims to have developed a process that draws electricity from renewable resources to obtain hydrogen from water and then after adding carbon to it, they combine the resultant CO2 with hydrogen to make synthetic gasoline, diesel, gas or kerosene. Bosch claims that with this technology, manufacturers can set up a virtuous cycle where the CO2 emitted by burning renewable synthetic fuels is reused to produce new fuels. Thus, vehicles on the road, when powered by synthetic fuel are ultimately climate-neutral.

The Fischer-Tropsch process (The process that was first developed by Franz Fischer and Hans Tropsch at the Kaiser-Wilhelm-Institut fur Kohlenforschung in Mulheim an der Ruhr, Germany, in 1925) produces renewable synthetic fuels that can be used with today’s infrastructure and engines. Experts call them ‘drop-in’ synthetic fuels because they can be deployed without first modifying infrastructure and vehicles, and they have an immediate impact and deliver faster results. They may also be added to conventional fuel to help reduce CO2 emissions from vehicles already on the road today. This way, these fuels could contribute to the cause even before they are ramped up for larger-scale production. The chemical structures and basic properties of gasoline remain intact, so even vintage cars can run on synthetic gas.

Biofuels are being produced from waste materials today, but the supply capacity is no match to fossil fuel. However, through renewable energy, we can produce a limitless amount of synthetic fuels.