When Pravin Malhotra, managing director of the New Delhi-based Nipman Fastener Industries, founded the company in 1997, he had basically conceptualised it as a small family business. 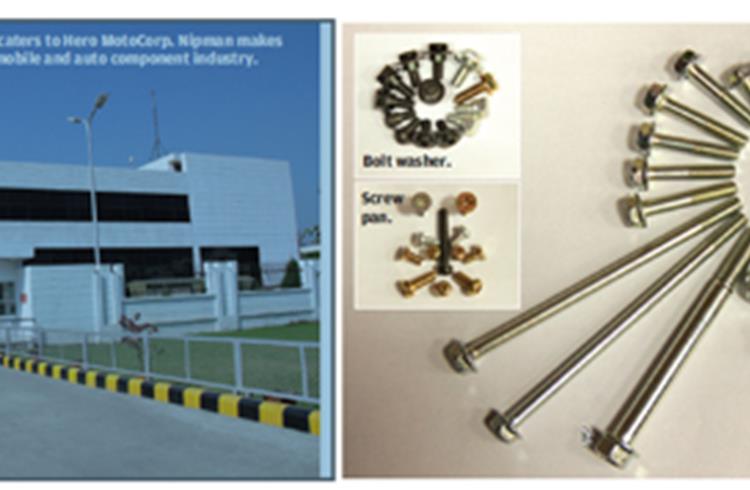 When Pravin Malhotra, managing director of the New Delhi-based Nipman Fastener Industries, founded the company in 1997, he had basically conceptualised it as a small family business. He had earlier, at his father’s steel plants, handled production and processes. But once he struck out on his own, choosing fasteners as his bread-and-butter business, his mentor, BrijmohanLalMunjal, chairman of Hero MotoCorp, roped him into the company’s supply chain giving him a big breakthrough.

At the time, there was a need for indigenisation of some critical parts such as fasteners, then imported, and localisation was the key to reduction in costs across the product portfolio. Moreover, the quality of the final vehicle depends on the quality of the fasteners, hence its importance. That was the beginning of Nipman’s growth trajectory as it grew from one manufacturing facility at Ghaziabad, near Delhi, set up in 1998 to three at present. Its second plant is located at Manesar while its latest facility with sophisticated equipment kicked off operations at Haridwar in 2010. This unit is a 100 percent supplier to Hero MotoCorp, which has a production unit located in the vicinity, in the industrial area of SIDCUL at Haridwar.

Malhotra laid the foundation of his own company based on people and processes. Among the things that enables the company to stand apart is that it has been able to maintain all its customers, suppliers and bankers till date as well as employees on its rolls right from the start of business, maintaining zero attrition at the machine operator level. Moreover, it thrives on a flat management structure and people’s management without hierarchy where the owners work alongside professionals on the principles of lean manufacturing.

Now in its quest to becoming a national player in the next three to four years, Nipman is taking a leaf out of McDonald’s with its small, self-directed, multi-locational teams and follows the same growth pattern. It is working very closely with Aon Hewitt, an HR consultancy, which has charted out a five-year roadmap for the company. In fact, Hewitt is doing a case study on Nipman’s strategy, vision and plan aimed at achieving 10 times its current size.

Nipman’s target is to achieve a turnover of Rs 1,300 crore over the next 10 years from the current Rs 130 crorelevel with Rs 650 crore to be achieved in five years. Based on that target, the company is enhancing its manufacturing with 70-80 people located at each facility. At present, it has about 200 employees and contract workers of around 120 at each plant.

“We started with a 20 percent share of business of Hero. That has now grown to 70 percent. At Haridwar, we supply 100 percent of Hero's requirements, making fasteners and certain engine components as a Tier 1 for all its two-wheelers. Fasteners are also supplied to Tier 1 suppliers such as Omax, Munjal Showa, Rico Auto and Automax as a Tier 2,” says Malhotra.

Renault-Nissan orders in the bag

Nipman is now all set to foray into the four-wheeler segment after bagging orders from Renault Nissan for two of its upcoming A-segment cars – codenamed i2 for the Nissan model and XBA for the Renault model – slated for a 2015 launch. It will be a Tier 1 supplier to them for fasteners and engine components. In its September 1, 2013 issue, Autocar Professional had revealed Renault Nissan’s plans to roll out affordable models.

To meet the carmaker’s requirements, Nipman is constructing a manufacturing facility in South India that will go on stream within two years. Malhotra says that Nipman is the only company to be selected for supply of those particular fasteners and will get 100 percent of that business. Totally, Nipman will be supplying about 60-70-odd components to the carmaker, both for its forthcoming models and for existing ones as well. Later, it will also supply cold formed components that employ a more advanced technology compared to fasteners. The supplier is diversifying into this product line and setting up a fourth facility at Bawal, Haryana, to produce them.

Nipman is also locating a fifth plant near Chennai for Renault Nissan and the sixth in Gujarat for Hero MotoCorp, which has announced plans for a Gujarat presence after its capacity expansion at Neemrana in Rajasthan is complete by the year-end.

The company is working with some specialists and has tied up for technical support from overseas for the cold formed component technology. It will also visit Korea next month to hire an engineering consultant and adviser to work alongside on the shopfloor. Cold formed components will include steering systems and transmission shafts besides machined components.

Of the Rs 650 croretopline targeted by Nipman in five years, around Rs 350 crore will be contributed by this product segment and the balance by fasteners. Customer enquiries have already started flowing in and Nipman hopes to expand its relationship with Renault Nissan by bagging orders for this product line as well.

Meanwhile, Nipman's strategy is clear. It will invest Rs 30-50 crore at each location over the next five years including Chennai, Bawal and Gujarat that will be funded through internal accruals. Construction at Bawal is currently underway and is expected to be completed by March 2014. With this Nipman will be entering the domain of powertrain-connected components. It is also in talks with Hyundai for them as it is located near Renault Nissan.

As the Renault Nissan supplier parks are booked out, another location in Sri City on the border of Andhra Pradesh is being considered. In addition to receiving approvals from Renault Nissan for supplies, Nipman has also received clearances from their ancillaries to supply to them as well. In the interregnum, supplies will start from the Manesar plant. Construction of the Chennai plant is expected to commence in 2014 and could take nine months. Product samples, however, will be sent by this year end. The Gujarat plant will go on stream by end-2015 and till then supplies will be routed from either Manesar or from Ghaziabad.

Last month, Malhotra was part of the ACMA delegation to Brazil. Describing his meetings, he says, “Everyone wants fasteners. So we will be in this line of business for a long time.” Hero MotoCorp, in the meantime, is establishing assembly lines in Latin America in Columbia, Peru and Mexico – countries whose markets are growing between 3-4 percent. Though Brazil has barriers to promote the local industry, steel required for making fasteners is 25 percent more expensive than the international market and that offers opportunities to Indian suppliers.

Malhotra says he is expecting a supply chain partner’s policy from Hero MotoCorp but so far there have been no indications as to whether the two-wheeler maker will be inviting its ancillaries overseas. While four-wheeler OEs normally take their suppliers overseas, with two-wheeler majors it is not necessary.

Meanwhile, Hero MotoCorp has given it a letter of intent for Gujarat supplies. Nipman is expected to be a 100 percent supplier for fasteners and will supply some engine components too. The supplier is also in talks with Yamaha for direct supplies and is also exporting to a 100-year-old fastener distributor overseas. In future, plans to participate at international trade fairs are also on the cards.

At present, Nipman’s capacities at its existing three facilities are full with Haridwar producing 400 tonnes per month, Manesar 500 tonnes and Ghaziabad 150 tonnes per month, taking up the total close to 1,000 tonnes per month. With Bawal on stream, the total capacity will rise to 1,500 tonnes monthly. Malhotra says that notwithstanding the slowdown, his company grew by 5-7 percent in the last three months. “We need to get into value additions and Hewitt is handholding us,” he adds.

Akhil Kapoor, a consultant from Aon Hewitt, who is in talks with the Nipman team at the corporate office in New Delhi, says he has been associated with Nipman for over a year and a half. “ We started work with them as part of a Hero initiative to develop their suppliers in HR capabilities and ensuring readiness in line with their future strategy. After the first year of identifying the needs, Nipman took it on itself to gear up as a robust and future-ready organisation.”

Hewitt is also providing training to the company’s owners and is providing support to enable them to reach the next stage of growth. While Nipman does not have an HR department, its HRD activities also include CSR activities and employee welfare.

From the very inception of each manufacturing facility, Nipman has enrolled itself for ACMA’s cluster programme graduating from the foundation to the more advanced learning stages. The company has repeatedly won ACMA awards for quality and productivity and has set up learning centres at each facility that provide training for personal development as well as shopfloor practices.

Kaizen or consistent improvements is the bottomline, with a no- reprimand policy followed. Instead, learning from mistakes is promoted. The company prides itself on never negotiating the price with its customers.

Another family member and son, Nipun Malhotra who takes care of the procurement, commercial and IT aspects, has started a cost reduction campaign. He says that a recession is the best time to outshine others through cost reduction and strategic procurements. He has been able to achieve significant cost reductions in tooling.

In fact, Nipman set up its Haridwar plant during the recession of 2008-09 and maintains that such a lean phase is perhaps the best time to acquire new customers who want suppliers to cut costs and better delivery.

Overall, the parts maker expects a 5-10 percent growth in 2013-14 and has improved its EBITDA by over 2.5 percent over last year due to cost reductions. But it did feel the heat when Hero MotoCorp had labour problems earlier this year.

Nipman currently holds a market share of 5-7 percent in the fasteners industry. While the design and engineering centre is located at the corporate office, the backend functions out of the plants that work two shifts.

This correspondent's recent visit to the Haridwar plant underscores the strong thrust given to the people culture by Nipman. Plant head Amit Shriwastav is a second-generation team member. His father, who had worked with Malhotra’s father, is now an observer there. Many of the employees and their children have gone onto complete their graduation and post-graduation.

Clearly, NipmanFastener Industries is not the small family concern that Pravin Malhotra initially conceptualised. However, the network of family-like ties within the company has benefited it. It can be said that from those small beginnings, Nipman has come a long way.