Eicher Motors’ Managing Director has tightened the ship at Royal Enfield, brought in a new CEO and could just pull off a success story with the new Meteor. He weathered competition successfully back home and is now building new markets overseas. 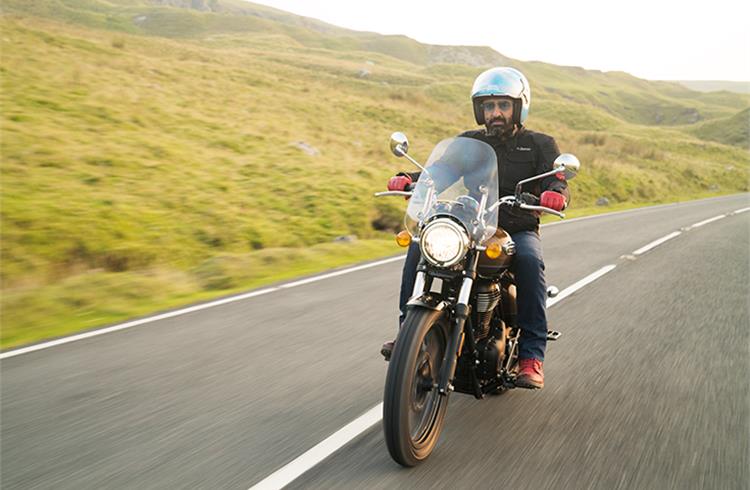 Eicher Motors’ Managing Director has tightened the ship at Royal Enfield, brought in a new CEO and could just pull off a success story with the new Meteor. He weathered competition successfully back home and is now building new markets overseas.

Have you ever thought of what’s common between Billy Joel, Brad Pitt, Jay Leno, Jonty Rhodes and Kalki Koechlin? Well, they are all proud owners of Royal Enfield motorcycles and if you are an '80s child, owning that ‘Bullet’ buzzing past is what most of our growing-up aspirations were about.

The best part is that the brand continues to be sought after by India’s GenNext which by itself is a tribute to the never-say-die spirit of Royal Enfield and its remarkable ability to constantly reinvent itself. And the man in the rider’s seat, Siddhartha Lal, Managing Director of Eicher Motors which owns Royal Enfield, has walked the talk in this journey.

Cut to the present and it is the launch of the Meteor 350 that is one of the gripping images of the automotive landscape this year. This is Royal Enfield’s latest addition to this exciting stable of cruiser motorcycles and came just weeks after Honda Motorcycle & Scooter India launched its H’Ness CB 350.

It is too early to gauge the Honda impact on Royal Enfield but a safe bet to declare that Lal’s company will continue to be the monarch of the midsize motorcycle space. There have been rivals keen to upset the Royal Enfield applecart but just haven't been able to do so. And this is where Lal deserves credit where it is due.

When he took over the reins of the company as a 26-year old over two decades ago, it was in a shambles operating out of an old plant near Chennai. Sales were almost laughable at that point in time till the proverbial David-versus-Goliath script was rewritten and Lal, along with his competent team, brought Royal Enfield back from the abyss.

It was the young CEO’s faith in the business which ultimately paid off even as he hired some top-class leaders along the way who played a role in the revival story. Likewise, it was his passion for motorcycles that made all the difference. In his own words, “Evolving from a diet of bicycles into my late teens, I was quite mesmerised by the idea of a quintessential American style cruiser.”

It was the Classic that turned out to be the inflection point for Royal Enfield and buyers queued up for the bike that made its debut a little over a decade ago. As sales soared, the company rebooted itself too. . . a new plant in Chennai with another to follow soon. A million bikes annually were par for the course now and the years of reporting minuscule numbers from the older facility seemed like a distant dream.

Yet, there have been areas of concern especially with the Classic 350 being the sole top performer while other brands have not quite caught up. It now looks as if the recently launched Meteor 350 will fire the second part of the Royal Enfield story (not to forget the 650cc twins, Interceptor and Continental which have added to its global aura).

Expanding aggressively overseas is the next big step especially in ASEAN and Latin America and this is where the new CEO, Vinod Dasari will steer Royal Enfield to the next level of growth. With digitalisation part of the new normal, the brand is initiating several measures like the plethora of customisation options for the Meteor, the My Royal Enfield Mobile App and the like.

How that translates into pure sales, financials and the company’s growth is something one needs to watch as Lal ushers Royal Enfield into yet another “new era in cruising.” For now, Eicher Motors has bettered analysts' estimates and the stock is close to its fair value level. Even in terms of net margins and dividend, it has managed to deliver consistently with the current market cap close to Rs 67,500 crore.