Tesla’s co-founder, a business magnate, industrial designer and engineer, has been making news for all of 2020, through aggressive EV play on ground and in the air through SpaceX. 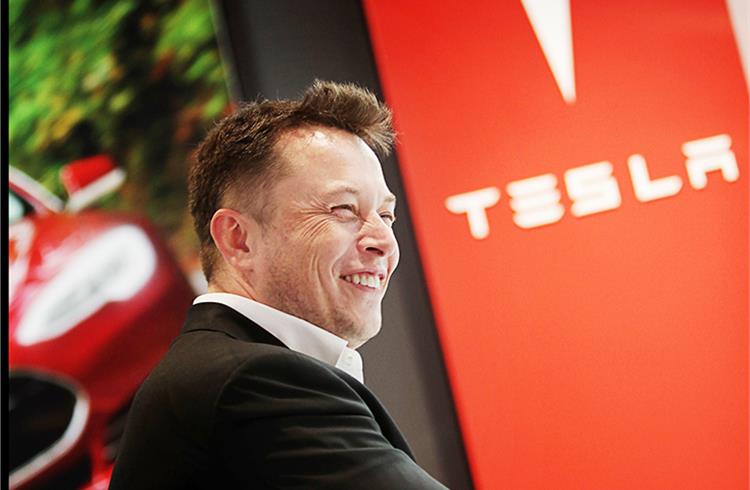 Tesla’s co-founder, a business magnate, industrial designer and engineer, has been making news for all of 2020, through aggressive EV play on ground and in the air through SpaceX.

Elon Musk, a name that manifests enigma, the maverick co-founder of Tesla — one of the best-known names in the electric car segment — is now the second richest person in the world having zipped past Microsoft’s Bill Gates and the Oracle of Omaha, Warren Buffet. With the whopping 670 percent rally in the Tesla stock so far this year, Musk’s net worth has risen to 128 billion dollars (Rs 947,328 crore) now.

That makes Tesla one of the most valuable automobile companies. In terms of sheer market value, Tesla is ahead of all the big four of the automobile world — Volkswagen, Toyota,  Renault–Nissan–Mitsubishi Alliance and GM.

Responding to this comparison, Akio Toyoda, President of Toyota Motor Corp, had an interesting analogy to share about Elon Musk and Tesla: "What we have and what Tesla doesn't have is the units in operation — more than 100 million vehicles out in the world. Tesla's business, if I can say, is a business is like a — you can use analogy of kitchen and a chef, I think. The kitchen and the chef, they have not created a real business yet or a real world yet, but they're trying to trade the recipes. And the chef is saying that, 'Well, our recipe is going to become the standard of the world in the future.' I think that is the kind of business they have.

What Toyota has is a real kitchen and a real chef… We make real food.”
Musk is known for his unconventional business approach and sharp repartees. Criticising the way American corporates function, he recently quipped that, “I think there might be too many M.B.A.s running companies. There’s the M.B.A.-isation of America, which I think is maybe not that great. There should be more focus on the product or service itself, less time on board meetings, less time on financials.”

Speeding through geographies
In a bid to convert this market value into real assets, Elon Musk is steering Tesla towards a rapid expansion program. The electric car maker is building two new factories, one in the US — Austin, Texas, and the other one in Germany — Berlin. The production capacity in its existing assembly facilities in California, Fremont and Shanghai are also being ramped up. Incidentally, in terms of market reach, Tesla has been concentrating mostly across US and Europe. China is the only Asian market where it has a presence. But come 2021, and all that might be changing fast.

According to a tweet by the South Africa-born American billionaire, Tesla is all set to embark on an Indian odyssey next year. The timing on Musk’s India move can be considered rather interesting, given the government’s ambitious push towards achieving zero emission and ramping up electric battery charging infrastructure.

Space for a lot more
But that is not the only action front that’s keeping Musk busy in 2020. Ushering in a brand-new era in space travel, his company, SpaceX in collaboration with NASA and in the first commercial contract with the space organisation sent four astronauts onboard its Falcon rocket and the Dragon Capsule on November 16. Docking for Crew Dragon was confirmed the next day. Another upgraded Dragon cargo spacecraft autonomously docked on an international space station in early December.

Therefore, there is no question that believers in the Elon Musk magic and those sharing his passion are awaiting 2021 with bated breath and a ‘What-next?’ look on their face. Well, in Musk’s own words, “So long, and thanks for the orifice! — Alien message decrypted.”

Are you wondering, what it means exactly, perhaps Musk will de-mask it in 2021!