As a Mumbai resident, I often find myself in slow-moving traffic on the Western Express Highway, one of the city’s north-south arterial roads. By 2016, I may have the option of doing a range of activities while I am at the wheel as my car drives itself at a speed of 30-40kph! 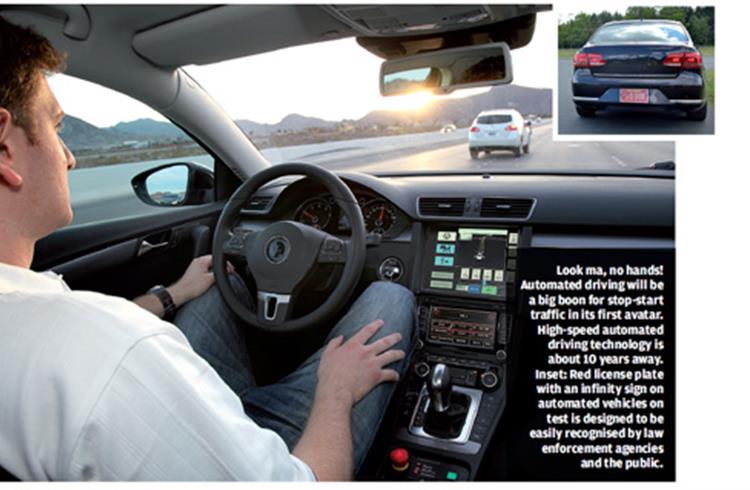 Automated driving is still a few years away but Continental is fast-forwarding tech even as it works on new technologies for emerging markets like India, writes SumantraBarooah.

As a Mumbai resident, I often find myself in slow-moving traffic on the Western Express Highway, one of the city’s north-south arterial roads. By 2016, I may have the option of doing a range of activities while I am at the wheel as my car drives itself at a speed of 30-40kph! This scenario may well be a reality if global supplier Continental’s plans succeed. “You will not have to shift to the rear seat to sleep but relax in your driver’s seat while the car moves and you eat your burger with both hands,” says Ralf Cramer, Continental’s executive Board member and head of its chassis and safety division, predicting this future scenario.

Riding the growth wave in Asia

Continental, a global Tier 1 supplier, is tweaking its strategies to ride the wave in the growth markets. Asia, for example, contributes 28 percent of global revenues for its Chassis and Safety division – one of the three verticals at its automotive group. In 3-4 years, one-third of the division’s business is expected to come from Asia. It’s no surprise then that Cramer has been chosen as the next head of Continental’s operations in China. While China is undoubtedly the bigger market, India has its own significance. “India is still one of the toughest markets for automated driving technologies. Being price-sensitive, there could well be a long way to go to convince buyers here to adopt these technologies as we have to start with the basics,” explains Cramer. One example of the technologies Cramer is talking about is the single-channel anti-lock braking system (ABS) that Continental is developing for India and designed to be mounted in the front wheel. “The single-channel ABS is more affordable than a two-channel system and has a better acceptance at the price level of the two-wheeler market,” says Cramer. However, before the single-channel two-wheeler ABS hits the market, Continental’s small petrol turbocharger – a cost- effective solution – from its Powertrain division will be here when the much-awaited Ford EcoSport SUV hits the market expectedly later this month. The EcoBoost – one of the three engine options for this compact SUV – will have Continental’s small turbocharger. Continental’s gameplan for the turbocharger aims to tap OEMs’ demand to supply products with better fuel efficiency and lesser tailpipe emissions. To build on this downsizing trend, the company has made a smaller turbocharger suitable for a 0.8-litre engine. “We worked on a concept like that,” José Avila, head of Continental’s Powertrain division, told Autocar Professional. This product may well find its way here too.

Continental’s Interior division is working on solutions aimed at making roads safer. Today, networked vehicle technology is already increasing safety and comfort and reducing power consumption. Drive control units communicate with safety functions and body electronics via data buses. Thus, for example, a rain sensor not only activates the wipers but it can also ensure that the electronic brake system adjusts to the wet conditions. The company is working on using smartphones not only for music streaming and phone communication, but also as the vehicle key, for personalising seat positions or for navigation. For emerging markets, the company is developing an instrument cluster that uses smartphone GPS data and navigation software, but displays the navigation instructions directly in the instrument cluster. Its engineers are looking at diverse applications for this human-machine interface (HMI).

Thus it is not only for design that development work is focused on curved touch-screens, touch pads with character recognition and tactile feedback, or 3D screens. The ultimate goal is safe driving. Take for example, driver distraction. Continental is working on a concept that links the driving situation and the driver’s attentiveness. In the ‘driver focus concept vehicle’, an infra-red camera records the driver’s state of attention, and sensors in the driver assistance systems such as lane departure warning and adaptive cruise control detect a potentially hazardous situation. Both sources of information are integrated into an innovative HMI that uses a 360-degree LED light strip inside the vehicle to direct the driver’s attention to the hazardous situation. Thus, distracted drivers get early warnings about potential hazards. For India, though, some bespoke solutions are on anvil: the e-Hub is one example. It is an instrument cluster that offers the driver information about the car’s speed, radio station, owner’s manual and even entertainment movies in a single screen. Coupled with a mobile phone, the TFT screen will also double up as a satellite navigation device displaying information, entertainment and command. The e-Hub could be the next significant offering from Continental for India and at an India-determined price.

Continental is also working on solutions for the internal combustion engine. While it undergoes an evolution, powertrains are seeing an increasing element of electrification. The company's engineers are working on developing solutions for various levels of electrification. Adding electric components to a drivetrain can make a car with an ICE more efficient than any tweak that the engine alone would produce. The benefits of lower CO2 emissions and less fuel consumption can be experienced by the driver directly, which is why fuel-saving 12-volt stop-start systems are so successful. These systems represent the entry level to electric vehicles. Market penetration, however, has lagged expectations. “There is a gap today between relatively affordable 12-volt start-stop systems and much more sophisticated hybrid solutions at voltages typically between 200 and 400 volts,” says Avila. “By tailoring our electrical solutions, we are creating a modular system that allows an OEM to realise hybrids of varying degrees with voltage levels between 12 and 400 volts,” he adds. Continental Powertrain is working to provide systems and products with an attractive cost-to-benefit ratio for customers and, according to the company, the 48-volt system is such a solution reducing carbon dioxide at affordable costs. At Continental’s TechShow in Hannover, I got up and close with these future technologies. Not all of them are likely to be seen here, at least not very soon. However, one can confidently say that with India’s growing importance — as a market and an R&D hub — in global players' overall scheme of things, expect Continental to play a more active role in India and also in a few more Asian markets.

Do you see hybrids having an advantage over electric vehicles? How is Continental preparing itself for the future?

We see electric vehicle penetration (full electric) in the EU to be 2-3 percent by 2020. There are fuel economy challenges in some markets like Europe, the US, and Japan. At the end of the day, you do need electrification. Hybridisation is key in markets where you need help in energy management in terms of electrification along with internal combustion to meet the target. Hybridisation will reach a much larger level than full electric. Beyond 2025, it is hard to predict. Markets like Beijing are already incentivising full electric vehicles. The technology is available. It could well be that the electric powertrain takes over when the IC engine cuts off when you drive downtown and the IC engine kicks in as you exit downtown. It is hard to predict the exact mix but we see aggressive incremental improvement of existing solutions till 2020. From 2020-2025, there will be more hybridisation.

Beyond 2025, it will depend on our willingness to work on solutions to counter global warming. From an Indian perspective, I feel there is a large leverage to go from Euro 4 to Euro 5. In terms of fuel efficiency, Indian vehicles are in good shape. But there’s a lot of room left in terms of emission controls and control technologies.

The small turbocharger in the Ford EcoBoost is key to the engine’s performance? Are further developments in that turbocharger family planned?
We have a fully-validated family of petrol turbochargers from say 60Kw to 200Kw. We are going to be launching by end-2013 with a second customer (the first being Ford India) and a third customer by end-2014. Our play is good cost:performance ratio. We will keep the design relatively simple so manufacturing is reliable. It is possible to downsize this but at the moment we are covering the main range.

Which are the key markets for the small turbocharger- fitted engine?
The US, Europe and China are going into the EcoBoost very heavily. There’s a large penetration of downsized petrol direct injection engine.

Will direct injection turbocharged petrol engines be the new trend in the industry?
Multipoint fuel injection (MPFI) will stay stable or may lose some market share. Some off-road motorcycles and other devices are adopting that solution. But MPFI will stay interesting till 2025. The growth of the market is being taken by direct injection gasoline (DIG). Electrification and hybridisation will be more widespread by the end of this decade.

How close are you to commercially launching the e-Hub for emerging markets?
We were showing our e-Hub concept on one hand and our integration of clusters and multimedia on the other. For India, we see a lot of potential in enhancing an instrument cluster with a tiny colour TFT (Thin-Film Transistor) display and with that integrate multimedia functionality like navigation or mirroring some information from mobile phones onto this instrument cluster. This is suited to India as it has value.

What do you rate as the most spectacular launch among the 236 products from the Interior division in 2012?
That would be head-up displays. In today’s head-up display, you have the windscreen which is used as the last mirror and is always curved. One needs mechanical adaptations for a rectangular projection. When you have a combiner, then the last screen is a glass or plastic. It simplifies the design, reduces cost and standardises the product. This makes it attractive for low-end vehicles. Head-up display has implications for automated driving. We also have an augmented reality in head-up display. You take the size of the display and enlarge it, add computing power to reality. For example, you see a pedestrian. You mark the pedestrian with a graphic. With augmented reality, you can also paint directly on the line of view on the head-up display along with the alert that you have to turn at 50 metres. In my opinion, we will see the head-up display pretty soon in the C-segment, and even looking towards possibility in the B-segment.We want to be ready for development and introduction in serial production but this could take 2-2.5 years.

What levels of connectivity do you see beyond 2025?
The amount of data that will be brought by a car to the backend and from the backend to the vehicle will be tremendous. So we are even thinking of streaming the view of the previous car. It has to be done for multiple cars.