NEWS FOCUS: ABS for CVs set to be mandatory soon

With road accidents increasing alarmingly in India, there has been an outcry to promulgate necessary legislation to plug in gaping loopholes in vehicle safety. Recent road accident statistics attribute 77 percent of the road accidents to loss of control over the vehicle by the driver. 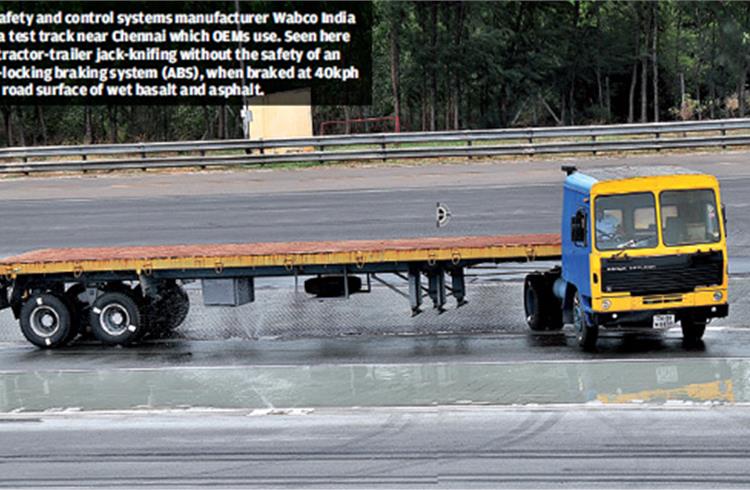 The government's expected nod to make the anti-lock braking system compulsory for CVs is a huge boost for safety and a step in the right direction. Shobha Mathur reports.

With road accidents increasing alarmingly in India, there has been an outcry to promulgate necessary legislation to plug in gaping loopholes in vehicle safety. Recent road accident statistics attribute 77 percent of the road accidents to loss of control over the vehicle by the driver. In fact, the latest report of the Road Transport and Highways Ministry has pegged one road accident every minute in 2011 claiming a life every 3.7 minutes. Of the 1,42,492 accidents in 2011, says the Ministry report, 13 percent have been attributed to trucks and eight percent to buses. India has one of the world’s highest road fatality rates and the need to tackle this issue expeditiously couldn’t have been more pronounced.

A recent meeting of the Central Motor Vehicles Rules Technical Standing Committee on May 16 under the aegis of the Union Ministry for Road Transport and Highways (with representation from SIAM, ACMA and testing agencies) decided to take the bull by the horns. It mulled over the anti-lock braking system or ABS being extended to a wider category of vehicles from the existing passenger cars and small bus categories. The outcome was a proposal to announce a draft notification in a couple of months, making it mandatory to fit ABS in new buses and trucks within a year from the date of the notification. The proposed notification will include buses that can seat 9 passengers and above with 5-tonne-and-plus GVW as well as heavy trucks of 12 tonnes GVW and above.

To come as an OE fitment, the ABS will be implemented in the N3 and M3 category of commercial vehicles or the larger trucks and buses. The draft notification will be followed by a final notification. It will become a legislation anywhere between 1-3 years before complete migration to this system is possible by OEMs.

ABS an essential safety system
So what exactly is ABS? It is an advanced braking mechanism which prevents wheel locking and skidding of the vehicle during sudden braking and in slippery road conditions, thereby preventing accidents. The ABS enhances vehicle steerability while braking, reduces the stopping distance, and ensures controlled stopping. In a nutshell, it helps the drivers to bring the vehicle under control under emergency braking.


“When all medium and heavy commercial vehicles are covered with ABS, the reduction in accidents will be significant. We can expect a 20 percent reduction in accidents in this category from the current level,” says V Balasubramanian, deputy managing director, Bosch Chassis Systems India. The company manufactures ABS for passenger cars currently and as part of an accident research study, supported by Nissan, Renault, Toyota, JP Research, Daimler and Hyundai kickstarted in 2011 in Coimbatore, Tamil Nadu, found the potential for car ABS to have increased from 22-46 percent from 2011 to January 2013.

Balasubramanian says that Bosch has been pushing for bringing in various kinds of safety legislation that are currently in force in the developed automotive regions. Bosch has made several presentations to OEMs and government authorities including the ministry of surface transport for mandating these. “An announcement from the government on the N3 and M3 range of CVs is a first step in the right direction and will lead to other actions as they study further needs of safety standards of all vehicles,” he adds. Bosch has sought to focus on ABS for smaller vehicles which are M1 (passenger cars), N1 (pickups below 3.5 tonne GVW), N2 (3.5-12 tonne GVW) and M2 categories that are equipped with hydraulic brakes. The legislation for implementing ABS in the larger range of trucks and buses will make it mandatory for manufacturers to fit the system, opening up a gamut of opportunities for component makers as well.

Most of these vehicles currently use pneumatic brake systems and ABS will also be compatible with pneumatic ABS. Main producers of ABS for CVs are Wabco and Knorr-Bremse. Pneumatic ABS involves the use of high-pressure air for braking and is suited for M&HCVs while at the lower end – in the sub-5 tonne – gross weight category and for cars, hydraulic brakes are more preferable. But hydraulic brakes require hydraulic oil and a larger number of components that makes them more expensive. While the proposed notification will encompass new models and does not envisage retrofitment, manufacturers will have an option to convert to ABS on their existing vehicles.

Meanwhile, the journey of ABS installation in commercial vehicles kicked off in October 2006 when government authorities notified it for N2 and N3 category of vehicles carrying goods of a hazardous nature as well as LPG in the 3.5 tonne and above grosss weight category. On 1 October 2007 another announcement made it mandatory for all smaller-size M2 buses plying on hilly terrain as well as all tourist buses (M3) double-decker transport buses (N3) and for the tractors of tractor-trailers.

The proposed notification for enforcing improved safety measures will make ABS fitment mandatory across the board for all category of vehicles. But implementation is expected to be a challenge. For a start, it is expected to cost anywhere between Rs 18,000-40,000 depending on the type of vehicle onto which it will be fitted. Once mandated, about 350,000 vehicles per year stand to benefit from it and as volumes increase and with localisation of production, cost economies are expected to accrue thus enabling it to become a mass market product.

Currently, OE manufacturers are fitting ABS in the tractors of the tractor-trailers, high-end models and new vehicle platforms. At present, select buses of Daimler and Volvo as well as Volvo trucks are fitted with ABS. This constitutes roughly 7.5 percent of the CV population, says S Balachandran, vice-president, Wabco India. He feels a grey area in the earlier ABS notification on M2 buses below 5 tonne GVW that ply in hilly terrain pertained to the lack of clarity on the definition of a hilly terrain as well as to who constituted the buyer.

Wabco India is currently developing the ABS for many new models and orders are expected for installing ABS for Stallion vehicles (a Leyland product) used by the Indian Army. Wabco is a major supplier to Tata Motors and Ashok Leyland for ABS for their tractor-trailers. Balachandran says the move to make ABS mandatory for certain vehicle categories is a good move that will necessitate improvements in the vehicle control systems to reduce the number of accidents. “This ABS mandate announcement will encourage companies to bring in advanced vehicle control systems. ABS is the foundation technology for any advanced vehicle control system," he says. This scenario will enable a platform for Indian companies to work on advanced technologies in commercial vehicles similar to those in developed countries. Vishnu Mathur, director-general of SIAM, reiterates saying that the government meeting held about two weeks ago on ABS implementation will benefit the CV sector by adding a high level of safety in vehicles preventing them for skidding in snow, ice, during the rainy season or while travelling uphill.

Globally, ABS traces its roots to the 1980s and has been implemented widely in most developed countries which are now moving to ESP or electronic stability programmes that have additional safety features. Relevant legislation exists in Japan, Australia, Europe and North America on it and ESP includes not only anti-skid prevention but maintains vehicle dynamics at times of cornering when sudden steering manoeuvres lead to instability and rollover. ESP will become mandatory in Europe in November 2015 and ABS in Brazil and Argentina from 2014. The current spread of ABS in passenger cars is 25 percent and 5-7 percent in CVs in India while it is almost 100 percent in Europe and North America, 80 percent in China and 50 percent in Brazil and Argentina where it is expected to be fully implemented next year.

In India, only high-end vehicles like those from luxury carmakers Audi, BMW and Mercedes-Benz in the E segment offer the ESP feature. It has been estimated that 90 percent of Mahindra XUV500s have been kitted out with the ESP supplied by Bosch. But due to its price implications, it will take a long time before ESP qualifies for standard fitment.

Balasubramanian says that Bosch is in discussions with different OEMs and is undertaking an accident research study to facilitate safety legislation in the country along with a consortium of automotive companies. It is in the process of collecting scientific evidence of the nature of accidents over the last two years to help zero in on the kind of technologies that are relevant for India. It has concluded that ABS is relevant to India as well and is now sharing these findings with different agencies including the government. Its focus is, of course, on passenger cars.

So as the need for safety spreads amongst Indian consumers, the select implementation of safety mechanisms will also witness an upward growth trajectory.