Honda’s midsized motorcycle is looking to grab a share of Royal Enfield’s pie with a tried-and-tested retro flavour. 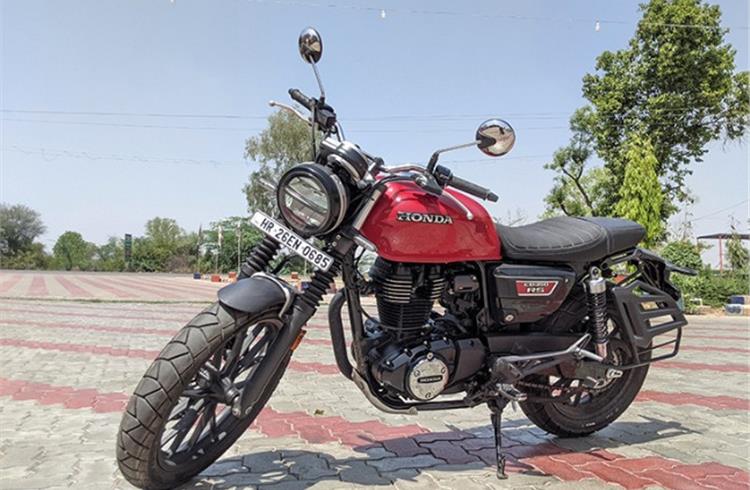 With a retro-modern design, the Honda CB 350RS strikes the right chord with the midsize bike buyer.. 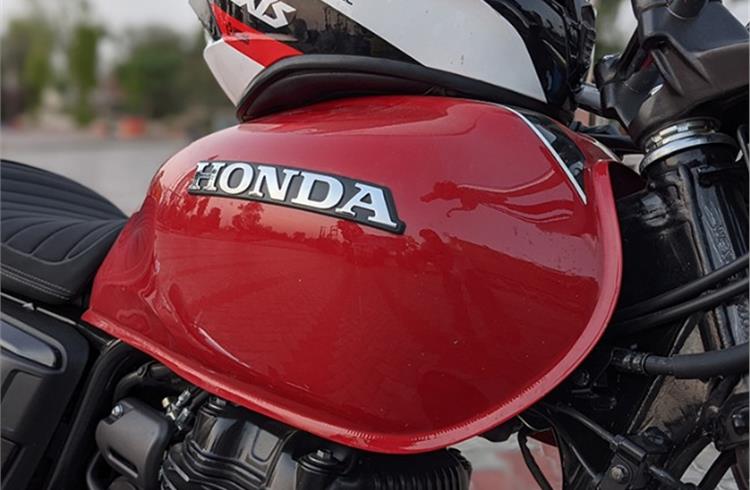 High-quality paint finishing with a stick-on Honda emblem is a classic touch. 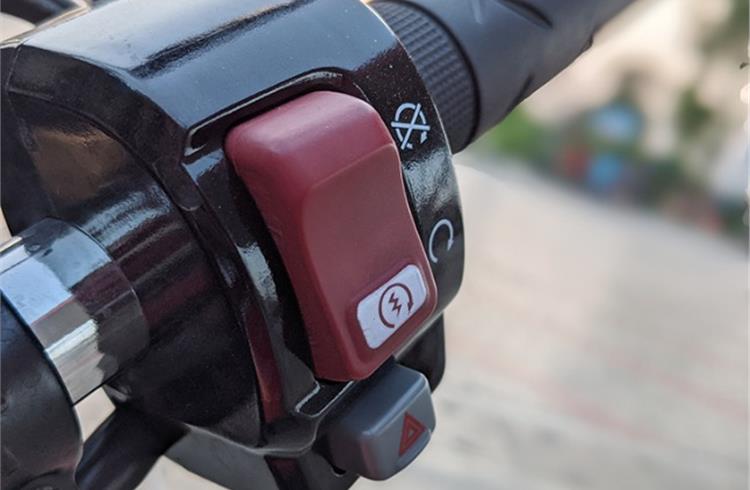 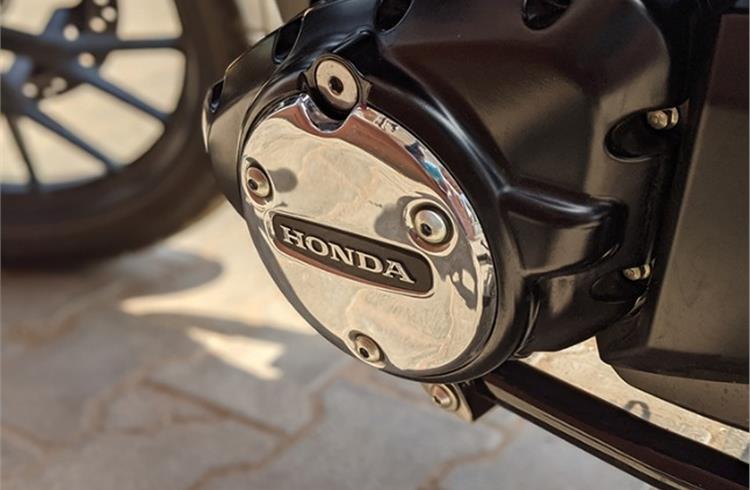 Chrome embellishment on the engine casing lends a subtle dash of contrast. 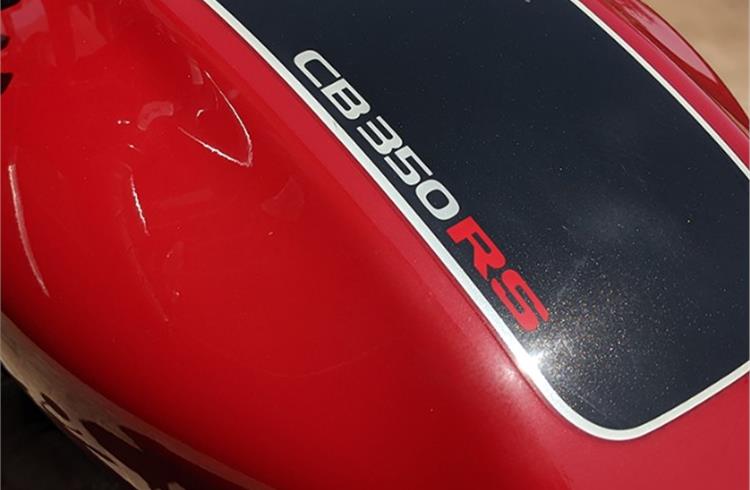 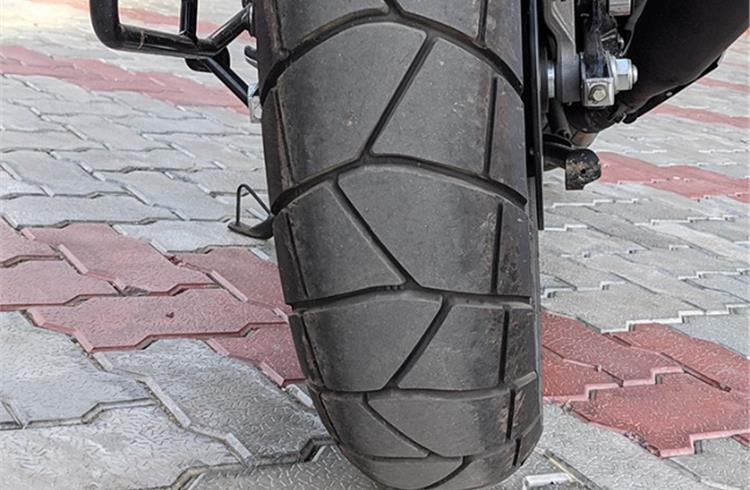 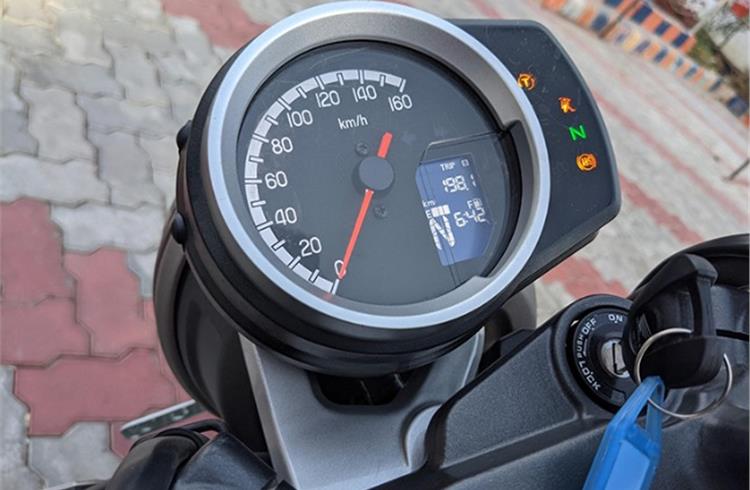 Analogue speedometer with digital MID is easily legible even in harsh daylight. 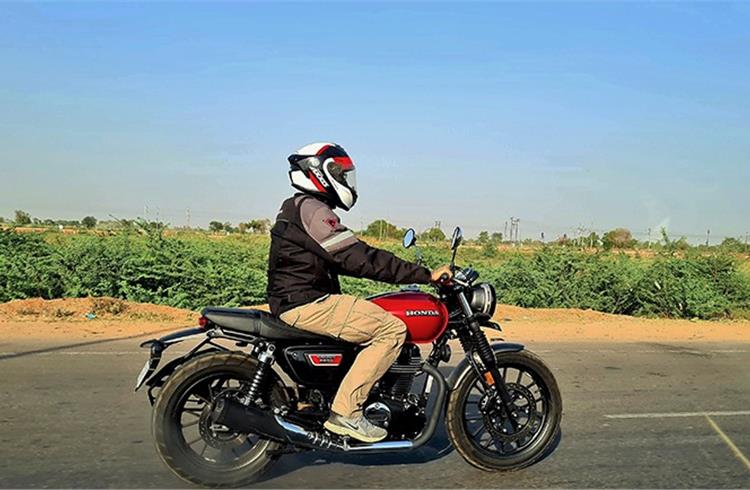 Honda Motorcycle & Scooter India (HMSI) could be dubbed to have been way too ambitious with its plans of stepping into the entry level, midsized motorcycle segment in the country, when it finally made way and unveiled the Honda H’ness CB350 on September 30 last year.

Almost immediately, its latest retro-modern offering was witness to a strong market response, with customers queuing up at Honda’s BigWing showrooms, even before the test-ride bikes were made available. The official launch that followed a month later, to strategically coincide with the start of the festive season in October, saw enquiries getting swiftly converted into sales, with a rather aggressive Rs 185,000 ex-showroom price announcement.

The initial euphoria was so strong that even with a limited presence of these premium, lifestyle outlets, the company ended up delivering over 1,000 motorcycles within a month of its launch.

All doubts surrounding the business plan that relied on a strictly limited number of retail outlets – 50 showrooms in key cities by March 2021 – compared to a massive existential network of segment dominator Royal Enfield, were seemingly being put to rest with sales growing month on month.

In less than three months, the H’ness CB 350 was 10,000 units up and that gave HMSI the chance to intensify its efforts and gun the throttle on this newfound wave of success. On February 16, 2021, the company introduced the Honda CB 350RS with a Rs 10,000 price increment, and spiced it up with some aesthetic updates and a more aggressive riding posture.

Pride red
The Honda CB 350RS looks the part with its dual-tone shiny paint theme – red with black accents – as in the test bike with us, which are further complemented by thicker rubber and matte-finished alloy wheels. The other colour option is a yellow-and-black combination. The front LED headlamp cluster is enclosed in a machined casing and its chunky looks are designed to catch the attention of the young. 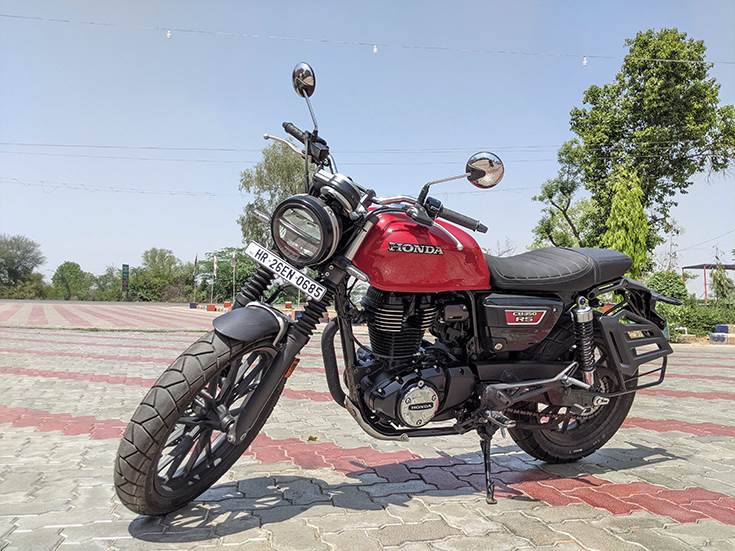 The chrome embellishments on the standard H’ness, for instance, on the front and rear mudguard, and the exhaust pipe, are replaced with black treatment in order to enhance the youthful appeal of this scrambler-like styling. At the rear, the shorter and wider tyre gives a sportier stance while the integrated grab rails and sleek LED tail-lamp excite onlookers.

The round instrument cluster with an analogue speedometer and an easy-to-comprehend digital information display adds to the charming styling on this motorcycle. It, however, misses out on the Bluetooth-connectivity function offered by the H’ness DLX Pro variant.

Fit and finish
The motorcycle looks very well built with an underlying layer of finesse and quality to most bits and bobs. The paint oozes glossiness and is delightful to the eye, while the switchgear feels tactile and quite well integrated too. The boots on the front fork, seat upholstery and the frame in general look well put together with no hard edges or uneven welds being visible to the naked eye.

The heart of the matter
The CB 350 twins come powered by a single-cylinder, air-cooled, BS VI-compliant 350cc engine that produces 21bp and 30Nm of peak torque at 3,000rpm. The engine is mated to a five-speed transmission and to begin with, is quite responsive and easy going in its power delivery.

On start-up, the motorcycle comes alive with a subtle grumble from the exhaust, which has been one of the key focus areas for the company in order to attract potential customers of Royal Enfield, which offers a distinct and affable thump on its motorcycles.

The 350cc engine is extremely refined and smooth and that could be attributed to the emphasis laid on load distribution and balancing by the company’s engineers. The power comes quite easy into the rev band and the motor is also sprightly and willing to offer more. The tractable nature is enjoyable both at city speeds as well as on highways, where it feels absolutely vibration-free until 80kph, and has enough grunt to go up to 120kph without losing steam.

A big contribution is that of the gearbox which is geared tall and offers precise shifts, complemented by an extremely-light operating clutch lever. The benefit of this combination is also seen in the fuel-efficient nature, where one could expect upwards of 500km from a full 15-litre tank.

Ride and handling
The Honda CB 350RS is a slightly tall motorcycle, and with its 179kg kerb weight, can be a handful to deal with at standstill and low speeds. However, as speeds build, its demeanour becomes quite composed, especially on bumps and broken patches. The suspension soaks most of these undulations with ease and keeps the rider comfortable and going for longer journeys. 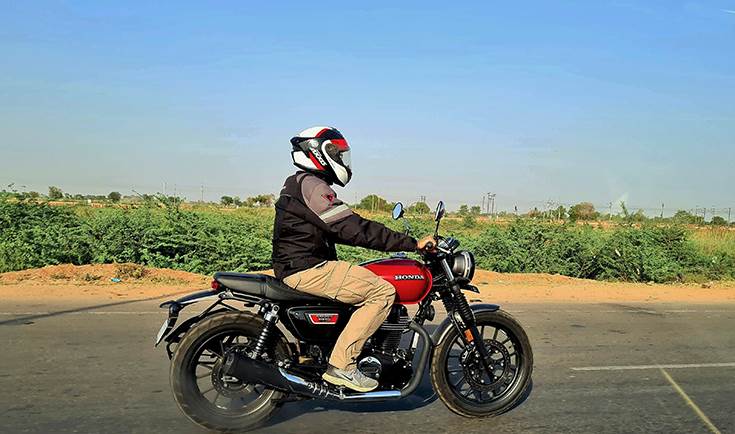 On the other hand, the RS’ rear-set foot pegs compared to the forward-set of the regular H’ness CB 350, do inhibit higher comfort levels after a while into the ride and coupled with the flat handlebar, tend to generate fatigue in the arms and legs. The handlebar also discourages the rider from going into a corner aggressively.

Braking and safety
The Honda CB 350RS comes equipped with a 150mm-wide rear tyre that aids in maintaining a robust riding stance while on the road. It offers adequate grip, and along with Nissin-sourced callipers and a dual disc-brake setup, the motorcycle offers ample stopping power. The ability to shed speed without losing composure is one of the highlights of the CB 350RS.

What also adds to the comforting factor is the presence of dual-channel ABS as well as Honda Selectable Torque Control System (HSTCS), that together allow the rider to safely enjoy long-distance highway touring as well.

Overall, the Honda CB 350 RS is an extremely well-rounded product that would cater to the needs of enthusiasts as well as riders looking to flaunt their machines. So far, Honda’s focus on key attributes of styling, exhaust note, quality and reliability have been well received by customers, thereby pushing the company to accelerate its Big Wing retail strategy in India with the growing sales of the CB 350 twins.

But, would the Honda middle-weights be able to snatch sales from the segment king, which, with the likes of the Royal Enfield Meteor 350, has already gained a second-mover advantage in terms of setting a lower price-tag of Rs 175,000? Honda has a huge opportunity here with a right product set and global brand equity to leverage upon.