The state is wooing investments in green tech and sustainability even as the state’s industry body has appointed a dedicated relationship manager to greenlight investments of over Rs 50 crore. 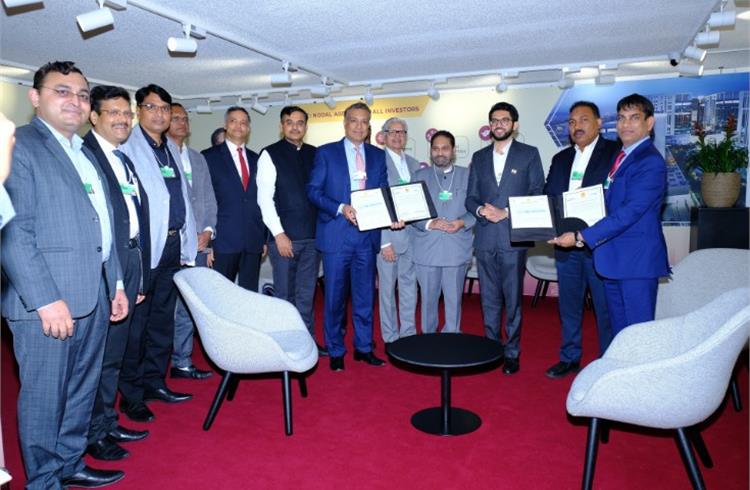 Maharashtra’s auto hubs which include Chakan and Nashik are seeing a flurry of investments as the state goes all out to woo tech-oriented companies. It also aims to attract players in the green tech and sustainability business to enhance its credentials as the destination of choice.

A high-level delegation led by Environment & Tourism Minister Aaditya Thackeray, industry minister Subash Desai and Energy Minister Sunil Raut, and a bevy of bureaucrats recently participated in the World Economic Forum, recently held in Davos, Switzerland unveiling the Magnetic Maharashtra 2.0. A total of $4 billion (approximately Rs 30,379 crore) in investments were signed at the MoU ceremony held in the Maharashtra Pavilion at Davos, according to an official statement.

Some of the new age  companies include Mitsubishi Electric Corps latest Rs 220 crore (3.1 billion) yen investment  at Pune in Maharashtra that is expected to be given an impetus to semiconductor production and other electronics businesses, said Desai.  “Maharashtra has been able to attract an FDI of more than Rs 2 lakh core, the highest in India," he said.

According to Desai, the state aims to become India’s EV hub by 2025. "With 50 percent of EV components being sourced from our auto hubs, we can safely say that more than half of Tesla globally is sourced from Maharashtra,'' he added. Along with Mitsubishi India, Omega Seiki Mobility too has firmed up plans to invest Rs 350 crores to manufacture electric three-wheelers for both cargo and passenger vehicles at Chakan  and open 75 plus dealerships by end of fiscal 2023. Uday Narang, Chairman-Founder of the company said that "right from plan to execution state government officials have shown a remarkable professional approach for our proposed unit at Chakan. No red tapism, smooth approvals and with many things in the ecosystem already there, and so Chakan was our natural choice," he said.

On other fronts, Causis E-Mobility, a UK-based electric vehicle startup, has also planned to invest Rs 2,800 crore in Talegaon near Pune. Electric bus maker PMI Electro is also setting up  its largest manufacturing plant at an investment between Rs 250-300 crore with  annual production capacity of 2,500 buses in Chakan. “The upcoming facility's strategic location gives it access to the Nhava-Sheva port as well as the supply-chain ecosystem in Pune along with logistical advantage to cater to the major markets in west, central as well as southern parts of the country, “ said Satish Kumar Jain, Managing Director PMI Electro said..

Proactive measures
The Maharashtra State Industrial Development Corporation (MIDC) has appointed a dedicated relationship manager  to greenlight investments over Rs 50 crore from proposal to business commencement. The Big 4 Consulting Firms Deloitte, Ernst and Young, Grant Thornton, KPMG, PwC and Wipro are working closely with various state departments to provide consulting and advice on various forms of e-governance and its helping.

With Maharashtra planning to give a fillip to manufacturing,  the state has cut the red tape as part of its  Maha Parwana plan that gives  ‘Plug-&-Play access to investment proposals, earmarking of more than 40,000 acres of land bank, flexible pricing and rentals, automatic clearances within 48 hours, and dedicated labour protection guidance.  Maha Parwana intervention will bring an end to bottlenecks in getting licenses and permissions for investing in the state. “Under this move, all statutory permissions required to start operations are to be delivered between 3-30 days or else, they are considered a deemed approval.”  senior officials in the industry department  confirmed.

According to experts Maharashtra's auto component industry  contributes to 31.5 percent of nations total automotive output. At Rs 50,000-crore in value, a majority of its turnover comes from the various  ancillary units. While competing with other states to attract fresh capital by way of sops through  incentives and tax benefits. MIDC CEO Dr. P Anbalagan said that there is a healthy and ethical competition between states  “On a head-to-head basis, we are willing to match or even better the stakes, to retain a fresh investment," he added. Harman, a fully-owned subsidiary of Samsung Electronics has invested Rs 350 crore in its existing Chakan supplies  digital cockpit units (DCUs) and telematics control units (TCUs) to provide connected car electronics solutions for large domestic and global customers including Maruti Suzuki, Mercedes-Benz, the VW Group, Tata Motors and Fiat Chrysler.

Lumax Cornaglia Auto Technologies, a 50-50 joint venture between Lumax Auto Technologies and the Cornaglia Group of Italy, set up an  R&D centre in Chakan and is working on air intake systems, urea tanks, other automotive tanks, CAC ducts and other blow-moulded parts.

Maharashtra is one of the first few states to launch its own EV Policy in 2018 with an aim to attract investments of 25,000 crore and convert 10 percent of its automobile inventory to EVs by 2025 generating in the process 100,000 new jobs. At a recent EV conclave, minister Thackeray said that areas in Talegaon and Chakan are expected to emerge as major centres for production pan India due to the ready automotive ecosystem in these areas.

“Maharashtra has made a giant leap in terms of EV adoption,” Aaditya Thackeray said at the conclave. The Maharashtra government facilitates adoption of EVs through price drop incentives and subsidies for both consumers and manufacturers under its Electric Vehicle Policy, 2021-2025, which has an outlay of Rs 930 crore. On the consumer side, Pune is all set to become India’s first truly EV ready state. to increase the overall adoption and build the climate for shift towards green mobility.

From the legacy manufacturers, Volkswagen India had earlier announced an investment around INR 8,000 crore to ramp up its India operations. Mahindra Group also as part of its recent plans has committed to Rs 15,300 fresh capex to push the envelope of its automotive manufacturing in the state. Bajaj has also announced the commencement of its greenfield EV plant for which the company has invested more than 750 crores

Legacy auto firms too are strengthening the digital play. P. Gopinath, CIO (Chief Information Officer) at Tata Motors says that with vehicles becoming ‘intelligent and connected’ through cloud, Tata Motors has developed a vehicle distribution platform that connects 2,60,000 vehicles across PV and HCV across over a thousand cities. Digitisation will play a key role in strengthening Maharashtra's business climate. Yogesh Thakar, Director, Automotive, PwC India mentions that it is equally important to note that it is not just about technology, but also about culture, skill upgrade and transformation  management, that will make organizations truly global. Gopinath & Thakker were speakers at ACMS’ seminar on the fast-changing trends and how HR are aligned with the latest digital transformation.

Building roads
Maharashtra has also taken several initiatives such as Pramod Mahajan Kaushalya and Uddyojakta Vikas Abhiyan(PMKUVA) drive skill-based training programs through Industrial Training Institutes (ITIs) and vocational training outfits to upgrade skilled, semi-skilled and unskilled workers to provide steady supply of workforce for the new industries upcoming in the state. The state is also planning to add road infrastructure worth 33,000 crores of which 26,000 crore will be used to fund the Pune Ring Road covering a stretch of 170 km. This project aims to decongest roads in Pune and Pimpri-Chinchwad and the balance for Nanded-Jalna Expressway Connector to improve connectivity between Nanded, Hingoli, Parbhani, and Jalna districts.

Arvind Goel, Chairman, Western Region, ACMA and Managing Director and CEO, Tata Auto Comp Systems says that with the industry undergoing significant transformation, the challenge for parts makers is where to invest. "Global companies are increasingly going for partnerships with domestic companies. Collaboration and co-creation is the way forward,” he explained.

The component industry too has been seeing investments in terms of increasing capacities and capabilities. "In my opinion, the government’s Auto Mission Plan is a robust plan backed by firm initiatives, which makes the overall industry and Maharashtra very attractive as a destination for investment" Goel stated.