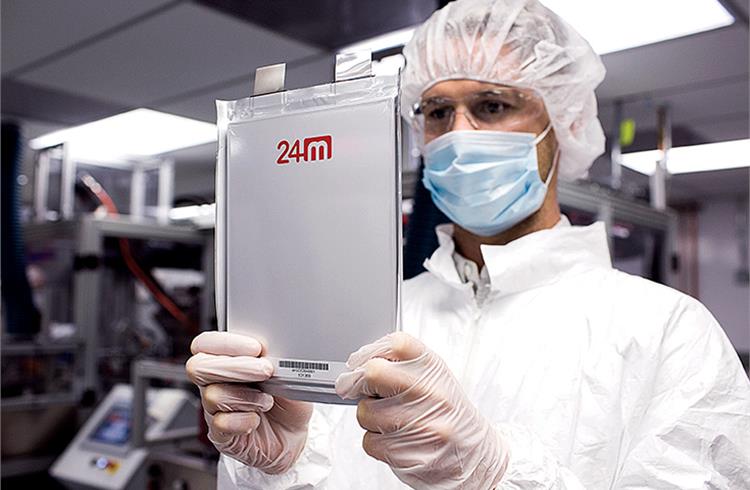 Tamil Nadu has been in the news for the past couple of months what with the Tamil Nadu Investment Conclave, a gaggle of electric scooter OEMs announcing plans for new plants in the state, growing number of EV dealers and various players entering EV charging infrastructure. While this is all about the EV ecosystem, the make or break of the EV story rests on the battery, which accounts for the bulk (40%) of an EV’s price. Lower the battery cost, more affordable the EV and in turn the potential for a speedier transition from ICE to EV. At present, the import content for EV batteries in India is very high, which adds to the overall cost of ownership.

Therefore, when electrical components maker Lucas TVS inked a license and services pact with lithium-ion battery technology developer 24M Technologies to set up one of India’s first gigafactories in Chennai, it was big news.
Lucas TVS will use 24M’s innovative and disruptive SemiSolid platform technology to manufacture lithium-ion batteries specifically for the Indian market. It will use different chemistries, in pouch and prismatic cell formats, with high energy density designed for e-mobility, stationary energy storage, grid-scale markets and lead acid battery replacement.

Gigafactory: The promise of tomorrow
The Lucas TVS gigafactory, slated to begin commercial production in the second half of 2023, will have globally competitive scale of 10 GWh. According to Babu K S V, Business Head – e-Mobility, Automotive Motors and Cooling Solutions at Lucas TVS, the aim is to cater to multiple applications.

With both the Central and several state governments offering plenty of incentives to enable the transition from ICE to EVs, it is likely there will be a surge of demand particularly for electric two-wheelers, which are already recording strong growth.
According to Babu, with each electric scooter needing 2-3 kW, the likely future scenario of a 10 million parc will call for 25 GWh. For cars, the requirement will be 30 GWh and for buses 200 GWh.

With a macro plan in place, Lucas-TVS plans to expand capacity gradually. Babu says, “We foresee a requirement of 100-200 GWh of installation in the next 5-6 years. This is a capital intensive operation with high gestation period. It takes 18 months to three years to set up a large- scale plant but somebody has to start now, if capacity has to be built for 2024-25. Even though we planned to put up a 10 GWh plant, we may start with sub-1 GWh. Customer qualification and commercial sales are also possible with this number. The timelines for full scale are difficult to predict . . . we will increase the output as we see developments in the market.”

The gigafactory is to come up on a 60-acre site at Thervoy Kandigai, Gummidipundi near Chennai, in phases. One of the key reasons for choosing the location was to be logistically close to EV OEMs. The recent past has seen Ola and Ampere Electric set up plants of sizeable capacity, which will call for plenty of battery supplies.

While most gigafactories have a high level of automation, Lucas TVS plans on having moderate level direct employment in support and infrastructure related areas but far more in battery and cell testing. “Ours will be a clean factory. As far as skilling is concerned, we will train them internally. How to get the right talent pool is a major factor and as of now, this is still work in progress,” adds Babu.

The Tier 1 supplier is also exploring potential to set up similar plants across India to cater to the growing energy storage, electric mobility and lead acid battery replacement markets. It is game to also set up multiple factories at different locations, either for cell or battery packs or both. “We are open to different kinds of approaches. If some OEM wants only cells, we are OK with that. If some small and midsize players ask for the whole pack, we are ready to do that too,” affirms Babu.

According to Babu, following Lucas TVS' gigafactory announcement there is already a buzz in the market. “As far as cell manufacture is concerned, most OEs are quite enthusiastic mainly because the cells have unique advantages in terms of technology, safety and recyclability. They are pushing us to check the samples.” 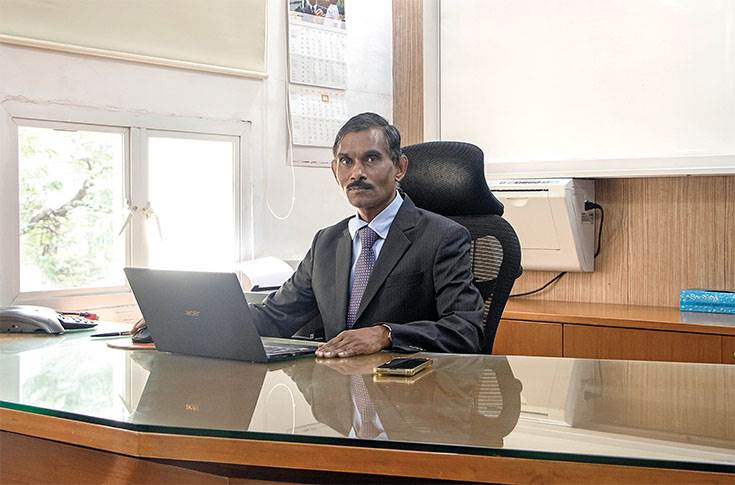 At the official gigafactory announcement on September 3, T K Balaji, Chairman and Managing Director, Lucas TVS, said: “Lucas TVS believes in investing in next-generation technologies, which is why we chose to partner with 24M. We are confident that their innovative SemiSolid platform technology will enable us to provide our customers affordable e-mobility, lead acid battery replacement and storage solutions with improved quality and best-in-class safety.”

Babu emphasises that the products will be designed and made to match India market requirements of operating conditions, temperature and humidity. He adds that the company and a dedicated team is working rigorously to achieve further localisation. Battery recycling is also part of the all-encompassing gigafactory plan.

Revving up the EV parts business
In the overall EV industry scheme of things, the gigafactory gives plenty more power to Lucas TVS, which diversified into the manufacture of two- and three-wheeler e-powertrains and e-motors over two years ago. The Pondicherry plant is set to commence production of e-motors soon, initially with 20,000 units per annum capacity. This will be scaled up to million units as the market expands.

“The delay was mainly due to Covid and issues in getting the equipment from different manufacturers. Apart from that, certain validation experiments of customers were also delayed due to the pandemic. The initial plan was to bring it out in the third or fourth quarter of 2021,” remarks Babu.

Keeping the pandemic in mind, Lucas TVS has also implemented a number of de-risking strategies right from the developmental stage. Separate teams have been set up in Chennai and Pondicherry where they have separate sets of focus. While the fundamental and initial development will happen in Chennai, the adaptation is in Pondicherry. The company has similar production capability in other locations. So, in the event of a producion hiccup at a plant, another facility can take it up seamlessly.

“We have set up two different development teams which are independent from each other. The production lines are also independent and will be operational between January and February 2022. We have also won several customers. Production of PMS for the first customer — a motorcycle OEM — will begin from February 2022. This product has been tested on the motorcycle for 25,000km without any problem. We have tested our hub motors internally for 5,000km on different customers' vehicles. Going forward, if there are different expectations from customers, we will support both product streams,” affirms Lucas TVS’ business head.

Both the products have almost 70-80 percent localisation. The magnets constitute the import content and Lucas TVS is in talks with local companies to source them. Other imports include a few sensors used in the PMS motors imported while for the controllers, almost all electronic parts are imported through local suppliers, from China, Taiwan and Singapore.

The ongoing semiconductor shortage continues to be a pressing issue. According to Babu, “Our controller validation trials were delayed due to non-availability of certain components. This is going to be there for a year or so. We have pre-ordered the chips, based on conservative estimates. These are non-returnable components and it is a challenge to order millions of pieces. We need to set a balance between speed and cost.” 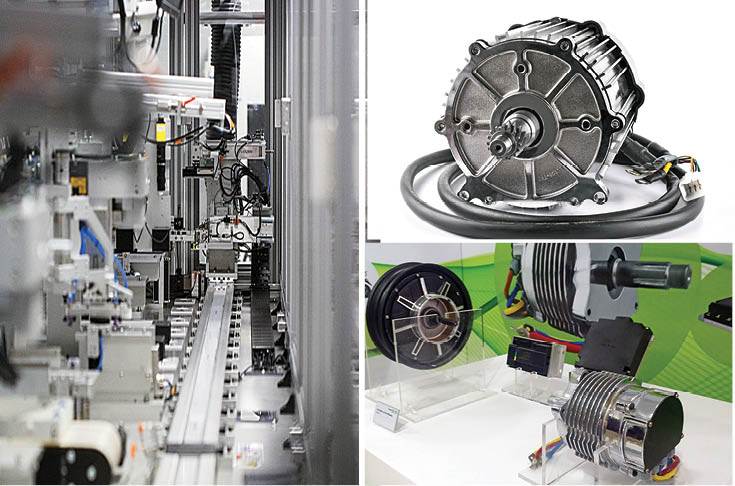 ICE and EV parts: a balancing act
For Lucas TVS, which has been producing IC engine component for over 60 years, the diversification into EV parts is also about being future-ready. Babu says the company is very well placed to support both ICE “as long as it exists” and EVs. “We have the right products, One is the existing bread and butter, and the other one is the future’ he points out.

“We cannot sacrifice anything. To bring sharp focus to every segment, we have different business verticals. Electric mobility is a high growth area and also an evolving space. It is also a technology incentive,” he says. He mentions the company’s interest in fuel cells given their synergy to electric motors but all this in a pre-evaluation stage.

Overall, the company’s plan is to ride the demand coming its way from both the IC and EV industry segments. “We are working with both established players and start-ups,” says Babu. As regards e-mobility in the medium and heavy commercial vehicle segment, Babu’s point of view is that “there are a different set of challenges there. Smaller commercial vehicles may be the first ones to turn EVs while ICE may continue to exist for some more time in M&HCVs.”