Localisation, exports the salve for slowdown

As part of its initiative to suggest ways to enable the automotive industry to emerge unscathed from the ongoing slowdown, Autocar Professional collaborated with technology leader DuPont to present an interactive dialogue ‘Let’s solve the challenges for automotive growth in India,” at Gurgaon on October 7. 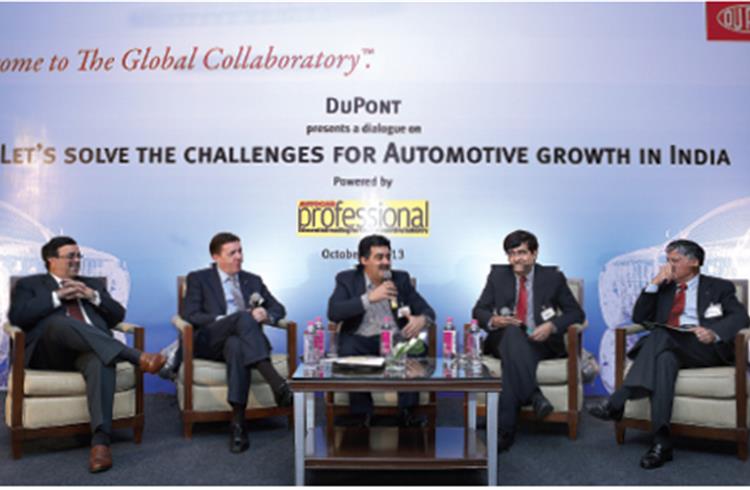 As part of its initiative to suggest ways to enable the automotive industry to emerge unscathed from the ongoing slowdown, Autocar Professional collaborated with technology leader DuPont to present an interactive dialogue ‘Let’s solve the challenges for automotive growth in India,” at Gurgaon on October 7.

Hormazd Sorabjee, editor, Autocar India, who moderated the panel discussion, began with an overview of the market. He said Maruti Suzuki as the manufacturer with the largest market share in India is the first to catch a cold when the economy sneezes. “A slowdown like this has not happened in a long time and we are, maybe, bumping along at the bottom with still no light visible at the end of the tunnel,” saying the only lights for the moment seemed to be Diwali lights.

Changing the rules of the automotive game

Elaborating on the theme of the event, Mayank Pareek spoke of how the slowdown has now become a way of life and everyone would have to find their own solutions to get out of it. Historically, double-digit growth for the automotive industry was expected to be a norm but no longer. While maintaining that in the short term there will be stress, he said in the medium to long term, the industry has huge potential. “Because of the slowdown, the game has changed and the rules of the game have changed. So we have to find new rules and work and play under those rules,” said Pareek. However, some segments are growing very rapidly like rural markets, which have grown by 24 percent between April-September 2013. In the absence of a mass market, Pareek suggested that industry should find different niches, small niches, segmented markets and leverage micro- marketing. For instance, Maruti has conducted upwards of 10,000 events in rural markets with an average of 350 events organised daily last month.

Going where the market lies

While Lowell Paddock agreed that even GM India is recognising rural opportunities, he added that they do not come on their own.

“Every day you need to get out into distant markets and villages and build up your equity and credibility. Another way of growing is through localisation that is very easy for Maruti, being part of its DNA, but for General Motors, it is a more recent development involving reduction of costs by energising the supplier base to maintain cost competitiveness,” said Paddock.

He visualised another possibility of growth by leveraging exports and said that India has grown dramatically as an export base in the last five years, not only to emerging markets but also to developed markets.

On the other hand, Anand Automotive’s Deepak Chopra suggested that while OEMs look for new markets to beat the slowdown, suppliers could look through their value chain to see what wastages could be trimmed to improve the quality of operations of their Tier 2 and Tier 3 supply chain. “We have a lot of initiatives at the Anand Group for our Tier 2s and 3s to bring up their quality base which has helped improve savings and preserve margins. Some inflation is bound to be passed onto consumers but we have to keep it to the minimum because the situation is very competitive. We have a programme called VSME (Visionary Small and Medium Enterprises) and our group has taken the leadership role with CII and JAICA and with the help of Japanese professors is running it for the past four years. Four batches have gone through this programme and it helped 120 of Anand suppliers to improve their operations. Many of them improved productivity and reduced costs by 40-50 percent,” said Chopra.

DuPont’s Dr Vaidya spoke of the potential of science to solve problems. “Science can bring in solutions very relevant to the Indian market place. At present, 85 percent of our fuel requirements come from imported fossil fuels and the importance of lightweighting is huge. What we can bring through advanced materials has a large potential, not only for lightweighting and improvements in performance, but for delivering value to the Indian consumer.” He stated that in many cases, car models which have sold in this downturn are really those models that are bringing new value to the Indian consumer. That requires innovation and collaboration across the value chain and hence DuPont considers the scope of science to be huge.

On the aspect of lightweighting, Sorabjee spoke of people wanting to increasingly reduce material costs which also benefits fuel consumption to a certain extent by lowering the vehicle weight.

While underlining the fact that exports cannot really be a substitute for the domestic market where growth in the medium and long term would be larger, Deepak Chopra added that the Anand Group has not cut down on any of its long-term initiatives in terms of investments and new pipeline of business or in increasing capability in R&D and product development. With passenger vehicle sales in India reaching three million per annum today, even auto component makers are hoping to garner a larger share of the production pie. This will require some standardisation of components using locally made materials to suit Indian road conditions. “We work with DuPont for lightweighting of various materials used in engine cooling systems, air intake manifolds, engine covers and air-conditioning systems,” said Chopra.

Having both a global as well as local – glocal – approach will pay dividends and act as a hedge against slowing sales in any of the two markets.

While the Indian market is driven by A- and B-segment cars, China and Russia are C-segment countries while Brazil is dominated by the B-segment. Hence, the need to blend global expertise to local requirements becomes even more significant here, felt Paddock. For example, in powertrain that is not easily deployable to regional development because of the complexity versus specific design elements. He said that GM's Tech Centre in Bangalore is undertaking a lot of local development work on reduction of fuel consumption.

Hence, his suggestion to leverage global scale in powertrain and blend it with the company’s local capability. “We look at India as a laboratory for driving costs down and for learnings deployable in the rest of the world for instance in Brazil, China and the US.”

That people are increasingly ready to pay for technology at what it costs in the changing landscape over the last seven years was brought out by Pareek. Earlier, usage of safety products like airbags was limited to less than one percent of car buyers. Today that has grown to 11 percent with second-generation buyers unwilling to buy non-airbag-fitted cars for transporting their families as they recognise the value of safety.

Similarly in 1991, the share of air-conditioners in passenger cars was five percent; today, 98 percent of cars are air-conditioned due to rising levels of pollution and noise. Also, 80 percent of entry-level cars have power steering thanks to the convenience and safety benefits.

Lightweighting vehicles is directly linked to lower CO2 emissions and improved fuel economy. The benefits of even modest vehicle weight reduction are significant. Reducing an automobile’s weight by 50kg reduces up to 5g of CO2 /km and increases fuel economy by up to 2 percent. DuPont says there's scope to reduce vehicle weight by up to 100kg.

DuPont, which has been driving the lightweighting mantra since long, displayed a travelling module of its applications and innovation centre, which is in Pune. The large product portflolio showcased were available for touch and feel as real solutions that can be applicated in India and drew a sizeable crowd of interested company representatives. Many were seen evaluating how they could leverage DuPont’s technologies in their components or collaborate for lightweighting materials on the lines of the Anand Group.

DuPont is investing in local capability to provide the kind of localisation that is required by the industry leveraging its global science. About five years ago, it set up its R&D centre at Hyderabad and today has 500 scientists on board. The centre, spread over 25 acres, offers globally relevant solutions while its application centres take real science to materials and create useful applications for use by industry.