Kia Motors rolls out the Seltos, looks to connect with youthful audience

Less than three years from the announcement of its India market entry plan, Kia, the Korean carmaker begins rolling out its made-in-Anantapur and high-on-connectivity Seltos SUV in multiple variants. Kia Motors India is also targeting high customer satisfaction from day one. 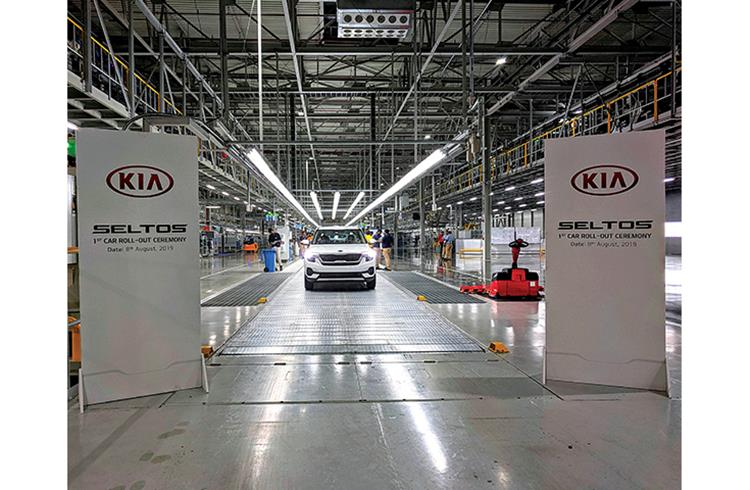 Twenty-nine months after it confirmed its India entry plan, Kia Motors, the sister brand of Hyundai and the world’s eighth-largest automaker, rolled out the production version of its Seltos SUV, manufactured at its state-of-the-art plant in Anantapur, Andhra Pradesh on August 8.

Kookhyun Shim, MD and CEO of Kia Motors India, said, “The rollout of the first Seltos is an emotional moment for all of us, especially for the people at the plant as we worked together, relentlessly to build the future of Kia Motors in India. The invaluable contribution made by the government of Andhra Pradesh has enabled us to achieve our target of manufacturing the Seltos in record time.”

Bugganna Rajendranath Reddy, finance minister, the government of Andhra Pradesh, said, “We are happy that the seed that we have sown is now bearing fruit. The government will continue to take steps to ensure further growth of the industry in the agrarian town of Anantapur.”

Sticking to timelines
Kia Motors' India project has stuck to its timelines. After commencing construction with the framework installation ceremony held in February last year, it began trial production in January 2019. Subsequently, it held the world premiere of the Seltos in New Delhi on June 20. Less than two months later, mass production has begun at the facility, which also boasts of being a zero-emissions and a zero water wastage plant with recycling, harvesting and conservation systems. 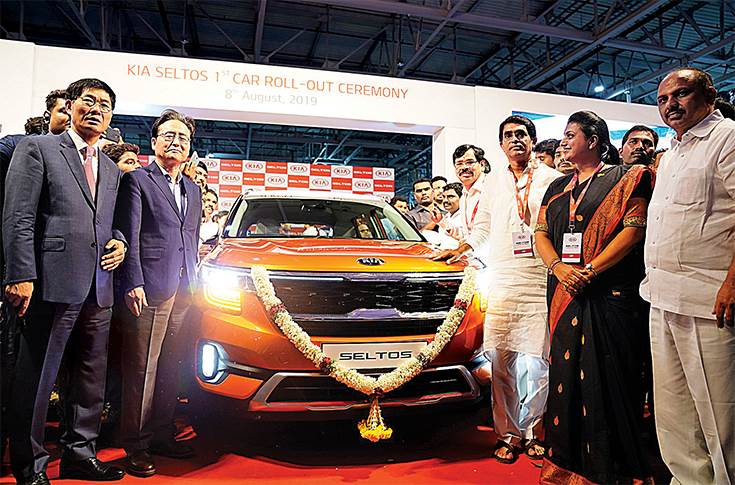 Ambassador of South Korea to India, Shin Bong-kil and Kookhyun Shim, MD and CEO of Kia Motors India, along with Andhra Pradesh government officials at the Seltos rollout from the Anantapur plant.

The plant, spread across 536 acres, has an annual capacity of 300,000 vehicles and is also capable of producing hybrid and electric vehicles. The company has invested US$ 1.1 billion (Rs 7,755 crore) into this greenfield facility, and has plans to further increase total investment to US$ 2 billion (Rs 14,100 crore) into operations, products, R&D and market expansion by 2021.

The plant is equipped with technologies such as robotics and Artificial Intelligence. The plant also houses a five-acre training facility offering a basic technical course in automobiles for skill development to provide all the skills necessary for an entry-level job on the factory floor, in the plant. According to Shim, “This is Kia’s 15th plant globally and is our most advanced facility to date. We are committed to work on elevating the skills of the local population so that they can contribute in building world-class products.”

Seltos — son of Hercules
Based on the Kia SP Concept showcased at the Auto Expo 2018, the Seltos’ name is derived from ‘Celtos’, the son of Hercules in Greek mythology. Kia says the SUV is squarely targeted at millennials and tech-savvy buyers scouting for a vehicle that stands out from the crowd.

The Seltos will be BS VI-compliant from day one. It will be powered by a highly efficient, brand-new Smartstream engine in three variants: 1.5 Petrol, 1.5 Diesel and a first-in-segment 1.4 Turbo Petrol, claimed to offer the perfect balance of performance and efficiency. The midsized Seltos offers three automatic transmission variants — 7-DCT, IVT, and 6-AT along with a 6-speed manual transmission thereby giving a range of engine and gearbox options to consumers that suit their needs and driving style.

The Seltos will be officially launched on August 22 and bookings are being accepted across all Kia dealerships in 160 cities along with the Kia official website. Since the commencement of pre-booking on July 16, the Seltos has already gathered bookings of 23,311 in a short span of just three weeks.

Strong distribution and aftersales network
While it may be a new OEM in the competitive Indian market, Kia is leaving no stone unturned to make a solid start. The company has already set up a wide network of 206 sales outlets and 265 touch-points across 165 cities — the largest retail network for a newcomer ever, it claims. On the service front, Kia Motors India has also announced that it will have 192 authorised service workshops in 160 cities.

The Korean automaker says it is committed to providing the best-in-class aftersales service to customers.  With an aim to offer a seamless and new-age car service and vehicle management, Kia will leverage IoT (Internet of Things) technology built into its Kia Link App.

Commenting on Kia's  new-age car servicing and management initiatives in India, Manohar Bhat, VP and Head – Marketing and Sales, Kia Motors India, said, “As a global leader in customer satisfaction initiatives, Kia Motors has been a frontrunner in raising the bar higher by giving the best of aftersales services to our customers. Kia Motors India brings in the similar level of quality and hassle-free experience as we command some of the most advanced tech-driven service centres in the country. Our spare parts network ensures spare parts are available across the country with 4 PDCs (Parts Despatch Centres) in Chennai (South), Navi Mumbai (West), Delhi-NCR (North) and Kolkata (East). We are confident that such a mix of both sales and service facilities will quickly instil the confidence of Indian customers in our brand."

Targeting high customer satisfaction
Easing the process of scheduling a service appointment, Kia vehicle owners will get notified via the Kia Link App about an upcoming service or a service due reminder. The App also enables booking an appointment at a preferred dealer. To eliminate delays and digitise the process, workshops are equipped with RFID scanners. This would be followed by allocation of a service advisor, who will diagnose the car digitally at the e-Vehicle Health Check-up bay and share the report with the customer via the Kia Link Dealer App with real-time updates and progress on the repair work.

The overall aim, says Kia, is to make the complete operations paperless and also provide a seamless experience to the customer. Furthermore, the service centres would leverage Kia’s extensive and well-equipped Mobis Network for timely delivery of parts through its four PDCs. 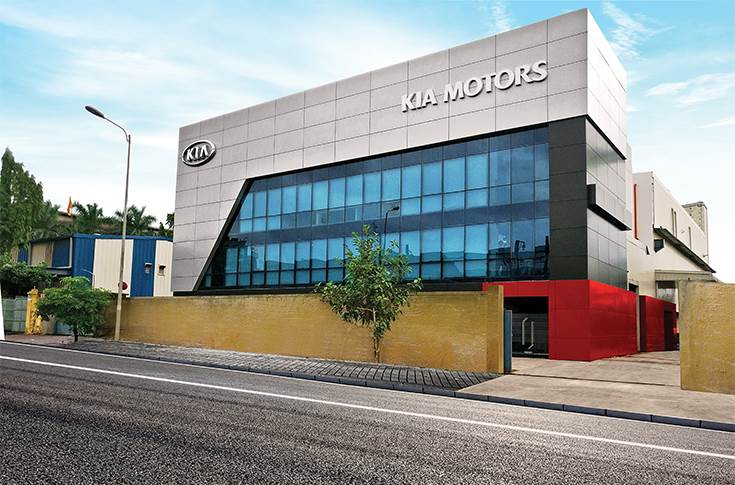 Training centre at Navi Mumbai is one of three such facilities. Since June, over 2,400 dealer staff have been trained on dedicated bays for mechanical repair, body and paint repair, and even EVs

Through the Kia Link App, customers will be informed of the ongoing work by the service advisor with periodic alerts, thereby increasing transparency around the total time consumed and the cost of repair and service. After final inspection of the car, customers would be apprised of completion of work. This will be followed by the customer receiving an explanation of the finer details of work required or done via KCVG (Kia Customer Visual Guide). The Kia Link App allows for digital payment via the in-built payment gateway.

Highly trained service personnel
Kia says the aftersales and service program will be carried out with utmost precision by its highly trained technicians, who have undergone skill enhancement and training programs at one of Kia’s training centres in Faridabad, Navi Mumbai and Bangalore. These centres are equipped to train the dealer staff on dedicated bays for mechanical repair, body and paint repair, EV training, sales training, role play, system trainings, digital and virtual training experience. Each facility, spread over 23,000 feet, is a state-of-the-art unit. All four have been in operation since June 2019 and Kia Motors has trained over 2,400 dealer staff thus far.

Given the manner in which it has gone about its India market entry strategy, Kia Motors seems to have its act in place. On August 22, the Korean carmaker's officially launched the Seltos and announced the Seltos’ price, which has got SUV aficionados excited and the competition somewhat worried. Why? The Seltos pricing  strategy for all of 16 variants covers virtually every price point and starts from Rs 969,000 (for the entry level petrol Smartstream G1.5 HTE model) and goes up to Rs 15.99 lakh (for the diesel 1.5 CRDi HTX plus (6AT) and Petrol Smartstream 1.4 T – Gdi GTX (7DCT) and GTX plus top-end variant). What’s more, even before the pricing was announced Kia Motors already had over 32,000 bookings in hand. Clearly, now in the SUV battlefield, it will be the SUV-ival of the fittest. Stay tuned.

(This article was first published in the August 15, 2019, issue of Autocar Professional)