The stepping stone to vehicle autonomy are advanced driver assistance systems (ADAS), which are set to make vehicles safer, helping reduce the startling statistics of global road fatalities – 1.25 million human deaths in road accidents in 2013, according to a WHO report. 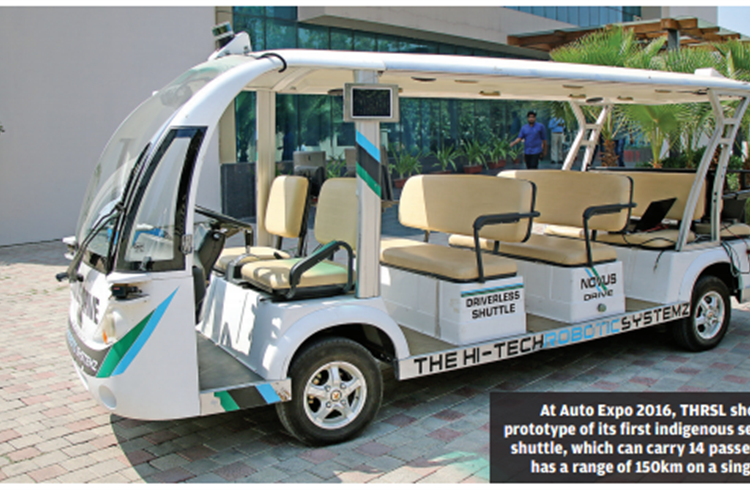 From barely fiveodd years ago, when autonomous driving started surfacing in automotive lexicon to now, when it has carved its own identity, the concept of driverless mobility is grabbing headlines the world over. While Google and Apple could be considered to have started it all, it was not long before automobile manufacturers, start-ups, electronic, IT and internet firms all began exploring vehicle autonomy and are now actively engaged in developing a host of new technologies designed to make vehicles drive on their own.

The stepping stone to vehicle autonomy are advanced driver assistance systems (ADAS), which are set to make vehicles safer, helping reduce the startling statistics of global road fatalities – 1.25 million human deaths in road accidents in 2013, according to a WHO report.

Again, with technological disruptions in the form of electrification and shared mobility already making an impact, industry experts believe it won't be very long before vehicle autonomy emerges into the real world, albeit first in developed countries. Ford, Tesla and Google’s WayMo are pitching 2018-2022 to be the trigger point, with fully autonomous cars making their way to the road.

Gurgaon-based The Hi-Tech Robotic Systemz (THRSL), an Indian automotive technology start-up bootstrapped in 2004, is making headway in the ADAS market and is locally developing solutions aimed at catering to upcoming needs of the auto industry.

The company, which introduced its first driver alertness monitoring system called Novus Aware in 2016, is now in collaboration with seven automakers operating in India. In fact, it is developing multiple ADAS products integrated into mass-market vehicles and set for introduction in the next few years. 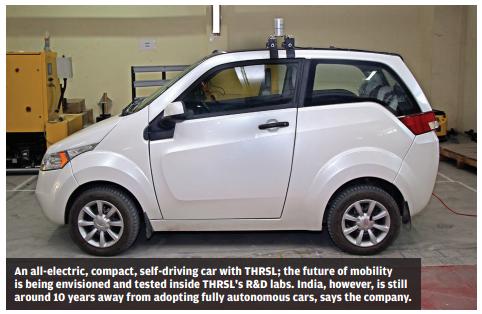 Technologies and business strategy, THRSL, “ADAS will be visible in commercial vehicles from next year itself. We are working with a CV major for implementing a driver alertness module in its vehicles. This equipment will find its way into mass market cars by 2020.”

THRSL is also deep diving into building more advanced artificial intelligence algorithms, and applying those to develop autonomous driving systems. At the 2016 Auto Expo, it showcased a prototype of its first indigenous self-driving shuttle, which can carry 14 passengers and has a range of 150km. Now work is underway to develop and produce highly efficient codes, which would be relevant to an emerging market like India where road conditions are chaotic and the situation extremely complex for a machine to respond on its own and safely traverse.

As a result, the company is using computer vision, machine learning and path planning systems as the core elements for devising highly advanced autonomous driving technology. Taking pride of place at its test labs is the automated guided vehicle and other newer products, which are undergoing development, testing and validation, giving a clear hint of what lies in the future. The R&D workforce comprising 120 engineers accounts for nearly 50 percent of the company’s total manpower. The research team has been growing at 30 percent since the past three to four years.

The automated guided vehicle utilises 3-D LIDAR, multiple stereo vision cameras, and a GPS module to scan its surroundings and navigate its way through a mix of physical and human obstructions. While a LIDAR (light detection and ranging) scanner projects a million laser beams in all directions, mapping the distance of the vehicle from objects, it is set to be soon replaced by high-vision cameras. Compared to LIDAR’s cumbersome size and limitations of accuracy levels of up to 2cm, image processing cameras now have an accuracy of within a a few millimeters.

With stages ranging from Level 0 to 5, autonomous driving is set to be an amalgamation of ADAS and full driverless control, with the vehicle not even having a steering wheel in a Level 5 autonomous system, which sits at the top of the pyramid. On the other hand, while Level 0 doesn’t involve any driver aid, adaptive cruise control (ACC) is a key example of Level 1 autonomy.

Level 2 sees a vehicle being able to control the steering as well as the acceleration on its own, thereby allowing the driver to take his/her hands off the wheel but still remaining attentive.

Level 3 and Level 4 are much more advanced areas, with almost all the functions being controlled by the vehicle, deploying its LIDARs, cameras and graphic processing units (GPUs) to crunch a detailed map of a vehicle’s surrounding in real-time and take instant decisions, but there is a thin line between the two. While a Level 3 autonomous vehicle could request for human intervention in case of a critical situation, Level 4 is designed to take care of much complex scenarios and keep human intervention at bay. However, it differs from Level 5 in a sense that Level 4 is still only programmed to handle a specific set of situations and might be inadequate to operate in a completely new terrain, where it will simply park itself safely without jeopardising passenger safety.

While technology development is in full swing across the world, India’s infrastructural challenges will pose a concern. “Because of various regulatory ethics, India is still some 10 years away from deployment of autonomous technology into mass mobility vehicles, but, it is bound to be here. We are already working hand-in-hand with three automotive OEs, out of which, two are Indian companies,” added Ritukar.

The company has struck multi-tenure pacts with these three automakers, which it refuses to name citing confidentiality agreements, and aims to support them by being their technology supplier and enabling them to realise the dream of an autonomous portfolio in an altogether new automotive era.

With a drastically changing mobility ecosystem, autonomy is set to be a concrete step towards enhancing road safety, wherein according to a KPMG report, the number of road fatalities will drop by a dramatic 80 percent by 2040, where shared autonomous cars will be a common sight on the roads. India too, ranks high in terms of road accidents, with 55 accidents taking place every hour in 2016, and 16 out of them proving to be fatal. According to research conducted by the transport wing of the Ministry of Road Transport and Highways, 150,785 people lost their lives across the country in 2016, a 3.3 percent increase over 2015’s statistics of 146,000 road accident fatalities. Metro cities, including Delhi and Chennai remained on top in terms of the sheer quantum of these mishaps, while Uttar Pradesh accounted for the maximum number of deaths due to over-speeding and use of mobile phones while driving.

A detailed study was conducted on more than 100 trips, with each trip averaging six days and drivers plying for 10-12 hours on road every day. The data recorded by the devices showed an alarming number of 120 warning signals being flashed every day, related to a forward collision warning or the driver becoming inattentive.

Twenty-one percent of these accidents were found to be falling in the category of ‘near misses’, and a driver digressing his attention from the road by reaching out to check his mobile phone every 30 minutes. Forward collision warnings were reported on highways, where vehicles were not abiding to lane driving.

The onboard ADAS equipment was found to be highly beneficial in these cases as a loud warning chime along with a haptic feedback on the steering wheel were seen to have immediately brought driver attention back onto the road in 99 percent of the recorded cases.

Positive steps could also be witnessed from the government’s end with the Ministry of Commerce setting up a taskforce on artificial intelligence. This special committee is tasked with formulating policies on autonomous technology, vehicle to vehicle (V2V), vehicle to human (V2H) and vehicle to infrastructure (V2X) communications, which would define the extent to which machine learning could be exploited to improvise these systems. With a competent team and potent products, THRSL is also looking to reach out to the global market and explore countries like Singapore, where regulations for autonomous driving are already in place and the year 2022 earmarked as its target to start adopting these intelligent vehicles.

Developing its technological systems in-house, the home-grown company sources its electronic hardware from leading suppliers based in Taiwan, Germany and China. With ADAS and autonomous technology both currently requiring extensive capital infusion, until the technologies are rolled out and adopted in mass numbers, THRSL plans to continue generating revenue and progress on the back of its core robotics business, where it has installed intelligent systems and mobile robots across the defence and industrial sectors.

Over the past decade, THRSL has supplied nearly 350 robots on the manufacturing lines and warehousing hubs of VE Commercial Vehicles, Ford India, Schneider Electric and Coca-Cola in India. With a new office recently set up in Canada, it is also eyeing business in North America and South America, along with Mexico and Australia.

With a humungous amount of advancement happening in the area of autonomous and ADAS technologies, their rollout into the mainstream automotive ecosystem is set to bring colossal commercial gains for developers like THRSL.

With three confirmed carmakers and one CV OEM already working in conjunction with THRSL, the stage is set for speedier development of further improved ADAS and vehicle autonomy, which could find limited application, at least initially, in the Indian market in areas like college and corporate campuses, research centres and exhibition venues.