INDIA@75: Nano, the dream that died

It was meant to be the real people’s car, meeting the aspirations of Indian families but finally, it may have been its cheap price tag that did it in 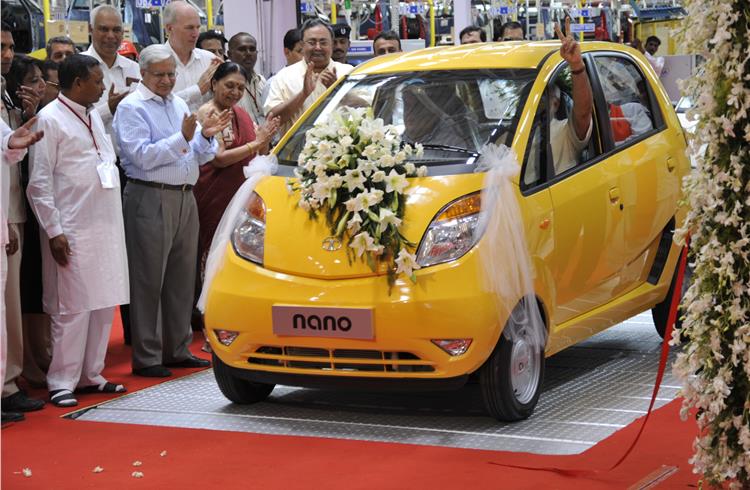 In June 2018, only one Nano was produced from Tata Motors’ Sanand plant and the company, at the time admitted that the car would not continue in its present form after 2019.

Wind back to the 2008 Auto Expo. The crowds that gathered to witness the launch of the Nano had to be seen to be believed. The Nano was on the stage wrapped up, and a cheering crowd waited with bated breath for the on-stage appearance of Ratan Tata, the chairman of the company to come and do the honours.

A UK journalist standing next to this writer had this to say: I have never seen such scenes as a journalist at the launch of a car.

The Nano launched on 23 March 2009 was the chairman’s brainchild, the idea  of which apparently originated when he saw a family of four squeezed together on a two-wheeler. This led him to think that if Tata Motors could develop a car from the ground up and price it in the region of Rs 100,000, a lot of families would opt for the safety of the car, and perhaps even the status of owning one.

So, Tata’s engineers went about conceiving and designing the car and, one of the things that was plonked in it was the 700 cc powertrain of the Tata Ace. Led by Girish Wagh, now Tata Motors’s ED, and who earned his spurs as part of the Indica vendor development team, he led the 500-member team tasked with leading the Nano team.  Wagh’s biggest challenge was to define the product’s specifications as they went along. Unlike the Ace where the specs were known, in this project all “we had was a cost target,” Wagh recalled in an interview. With no car as a model to follow, it used the Maruti 800 for comparison. Among the many suppliers that got on board was Bosch that made starter motors and other parts.

Ratan Tata spent a lot of time with the team reviewing the prototypes and making suggestions. As Wagh recalled in that same interview, “ “They knew they were doing it for him.”

What was perhaps a recklessly courageous decision was the choice of the backward district of Singur in West Bengal to build the car. If the project took off it would have created about 10,000 direct and indirect jobs. Sadly, the script did not work as planned thanks to issues over land acquisition, and the project shifted to Gujarat where it became the nucleus of Gujarat’s now vibrant automotive hub.

Post- launch, three Nanos caught fire, and this may have affected buyer sentiments towards the car but the numbers did come in the initial years. Research suggested that the car would bring four-wheeled transportation to at least 14 million Indians who use overcrowded bicycles and motorcycles. Moreover, an agency like Crisil reportedly was bullish that the Nano's launch could expand the Indian car market by 65 percent. There were also talk about how so many would buy the car that traffic jams in cities would get out of hand. At the height of its existence , the Nano sold in the region of 10,000 units a month and for fiscal 2011-12, it sold 75,000 units

The car never really sold at the target price of Rs 100,000 lakh once excise and local taxes were factored in.  Moreover, the difference between the on-road price of the car and its nearest competitors, all from Maruti, meant that price was no longer the key consideration factor. It has been reported that many bought a Nano as a second car or weekend car, and it may have enjoyed some purchase in India’s crowded cities where parking is a premium. However, marketing gurus are of the opinion that a cheap and affordable car would not figure within the potential buyer’s aspirational values. Consumers took the Nano’s cheap price tag as an indication of its quality, so in a sense, the marketing campaign eventually backfired. Potential buyers were also put off by the delayed deliveries of the car.

Looking back, one wonders what impact it would have had if the car had taken off. It would no doubt cost a lot more and perhaps Tatas would also bring out new variants or even special editions. Finally, if the Singur issues did not crop up, it would also have changed the lives of people in a state and may have led to more companies considering setting up base there.