India grabs the spotlight at IZB '08

the Indian autoi sectore is seen as an important and growing new market by German automotive manufacturers and component suppliers. 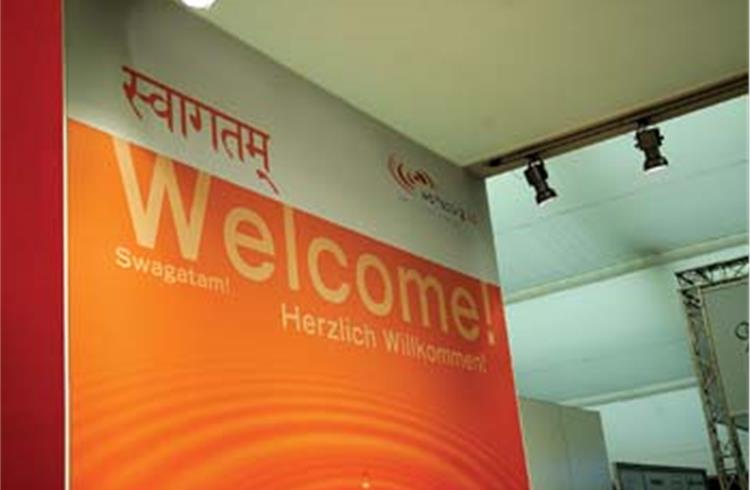 The growing global importance of the Indian automotive and component industry was clearly reflected at the fifth International Suppliers Fair (IZB) 2008 held in Wolfsburg, Germany. Organised by Wolfsburg Ag, which is a partnership between the German carmaker Volkswagen and the government of Wolfsburg, the fair was held from October 29-31, with India being the partner country this year. Autocar Professional was one of the media partners for the IZB, where 57 Indian auto component companies and a total of 650 exhibitors displayed their latest products and services.

At the opening ceremony held on October 28 at the Autostadt, Volkswagen's museum in Wolfsburg, there was a distinctly Indian atmosphere with 1,600 high-ranking guests from the automotive industry in attendance.

Speaking on the occasion Bernd Osterloh, chairman of the general and company works council of Volkswagen AG said, “Within a few years, the trade fair has developed from a kind of VW in-house event into an internationally acclaimed platform for industry. We are fully aware of the importance of suppliers for the simple reason that an increase in employment has predominantly taken place in this sector.

We are paying close attention to this development as VW itself is a successful supplier. With our in-house component production facilities providing employment for more than 30,000 people in the VW brand alone, we are able to deliver engines, gears and a wide variety of other components to our group. This is why the Volkswagen Group is much more aware of your needs than other automobile manufacturers”.

According to the ambassador of India to Germany, Meera Shankar who spoke via a video link, “the participation of India as a partner country at the IZB will have a sustainable positive impact on business relations in the automotive sector and lead to a win-win situation for both sides”.

Discussing the challenges facing German component companies entering India, Prof. Dr Bernd Wilhelm CEO, Wolfsburg AG, said, “India is not just a low-cost country but its automotive industry has a high level of development. This is why German companies could see increasingly levels of competition. Manufacturers and suppliers who want to be successful in India have to be present in the country and localisation is the key to success.” India takes centre stage India has emerged as one of the significant new markets for global automotive suppliers and was the main focus at IZB 2008. As a result Indian suppliers could take advantage of the show as a communication and networking platform to highlight specific opportunities to leading OEMs from Germany and abroad as well as the international automotive suppliers.

India also took centre stage in the programme of events accompanying the IZB with Indian exhibitors showcasing their product range and services in Hall 2 spread over a large area. According to the organisers, the presence of Indian automotive companies at the IZB broke all records Europe-wide as they claim there is no other automotive show in Europe which attracted as many suppliers from India as the IZB 2008. For many of the Indian exhibitors it was the first time that they participated in an European exhibition. Experts from leading Indian and German OEMs and suppliers met on October 28, one day prior to the first day of the IZB when the ‘Indian-German Automotive Congress’ was held in the Forum AutoVision of Wolfsburg AG.

The Indian exhibitors expressed satisfaction over the opportunities they got to showcase their products. Dana Holding Corporation, the US-based company, which is a world leader in the supply of axles, driveshafts and structural, sealing and thermal management products, displayed a number of products being manufactured in India, including rear axles and propeller shafts designed for Tata Motors’ crossover vehicles and pickups. The Anand Group, one of Dana’s joint venture partners, also exhibited its products in the Indian pavilion. According to chief executive officer Gary Convis, Dana had recognised the importance of the Indian market many years ago and the company is well positioned as a supplier to the expanding vehicle manufacturing industry. Dana currently employs around 2,000 people at 12 facilities and technology centres in 10 cities across India. The company along with its partners supplies products to customers like Ashok Leyland, Mahindra & Mahindra and Tata Motors.

Spicer India, which also had a presence at the show, is a majority-interest JV with Anand Automotive Systems and was set up in 1993. The company produces axles, propeller shafts and other related components for cars and light commercial vehicles, both in the domestic and export markets. Dana also has a technical centre at Pune, called the Dana India Technical Centre, which is a world-class drivetrain research and development facility.

Other group companies include Axles India, a minority-interest JV with the TVS Group and Sundaram Finance that was acquired by Dana in the late 1990s. The company makes axle housings which it supplies to Dana for its commercial vehicle axle operations, as well as supplying to various Indian OEMs. Similarly, Dana India is a wholly-owned operation in Pune that manufactures axles for the off-highway market. Victor Reinz India has a JV with the Jayant Group for the manufacture of Victor Reinz sealing products. The facility is expected to begin production of multi-layer steel cylinder head gaskets, secondary gaskets and heat shields for its Indian automotive customers in the first quarter of next year.

Dana displayed products such as Spicer AdvanTEK axles for front and rear applications, which have improved torque density and lower noise, vibration and harshness (NVH) as well as better energy efficiency. Other products displayed included Spicer Life Series propeller shafts for commercial and light vehicles which has a series of prop shafts that have lighter weight components and improved durability and NVH performance. Other products included thermal management products featuring oil coolers and heat exchangers that help improve fuel economy, lower emissions and assist in extending the life of a vehicle’s engine, transmission and cooling system.