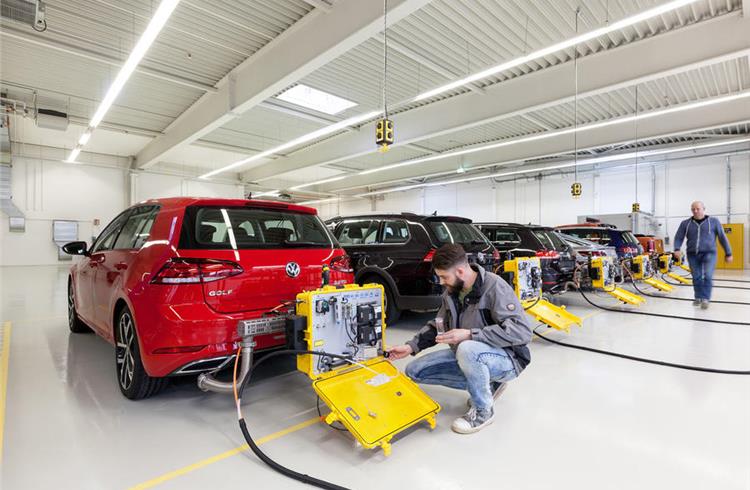 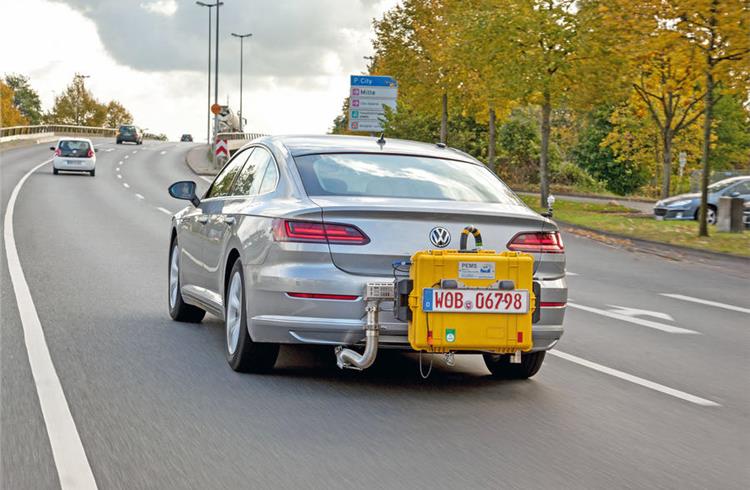 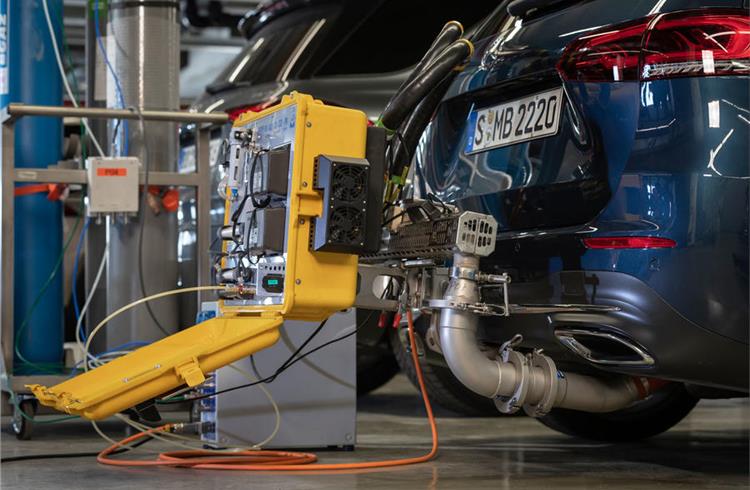 Poor air quality is a major issue for virtually every city globally. It not only affects people’s health, but also other living beings and the environment, says The Real Urban Emissions (TRUE) initiative.

The Real Urban Emissions (TRUE) Initiative is a partnership of expert groups with a shared interest in cleaning up vehicles and improving urban air quality. The FIA Foundation, the International Council on Clean Transportation (ICCT), Transport and Environment (T&E), C40 Cities, and Global NCAP (GNCAP) are involved in a small steering group for the work of TRUE. A wider network of expert and interested groups, such as a number of Remote Sensing research groups in Europe are also involved in helping to support TRUE's work.

The study says that high levels of nitrogen oxides (NOx), particulate matter (PM), and ozone pollution significantly contribute to these problems. Excess NOx emissions above legal limits in the real world are linked to 11,400 early deaths alone in Europe each year and particulate emissions have even larger health impacts. Nitrogen dioxide (NO2) exceedances are an EU-wide problem, especially in large conurbations (see figure below). For instance in London and Paris, motorised vehicles contribute to around 50 percent of urban NOx emissions. In London, the majority of its inhabitants are exposed to PM over 50 percent above air quality guidelines. 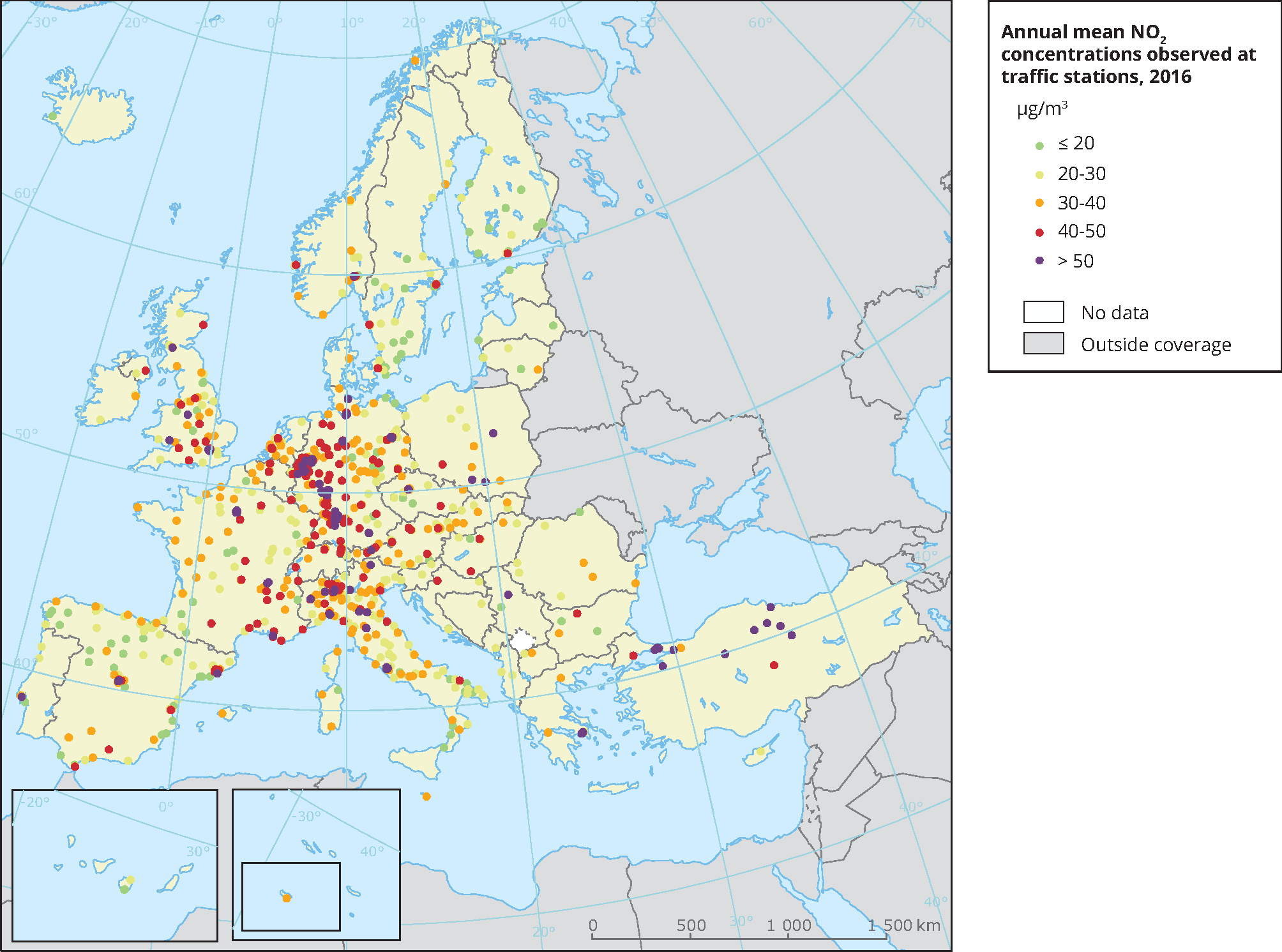 The policies to address vehicles’ contribution to poor air quality are challenging as there are huge gaps between the tested and real-world values of vehicle emissions. Understanding real-world emissions is vital to developing effective policies to tackle air quality problems, such as low emission zones (LEZs), vehicle bans, or scrappage schemes. TRUE's initiatives aims to address these problems through the collection of real-world data on vehicle emissions, research, and outreach.

The importance of real-world emissions data measurement of exhaust emissions from vehicles during normal, on-road operation is key to any effective system for controlling air pollution in the transportation sector. It is essential to detecting discrepancies between certification-test performance and actual, 'real-world' vehicle emissions, whatever the cause of the performance gap—equipment failure, normal deterioration with use, or deliberate efforts to cheat regulations. It gives regulators and researchers insight into both transportation’s contributions to local air-quality problems and the effectiveness of policies intended to mitigate those problems.

The study says that the most widely known method of in-use vehicle emissions testing employs a portable emissions measurement system, or PEMS. This involves sampling and analysing tailpipe exhaust with equipment mounted on an individual vehicle as it is driven over the road or on a closed course, and produces a detailed, second-by-second record of emissions from that single vehicle. PEMS is widely used by researchers. Remote sensing as a means of measuring motor vehicle emissions is less well known, though it is a well established research technique in that area as well as others, and like PEMS has been successfully deployed by vehicle emissions regulators. Compared to PEMS testing it is less expensive in terms of both time and money. That plus the unobtrusive (remote) nature of the technique make it well-suited to fleet monitoring. 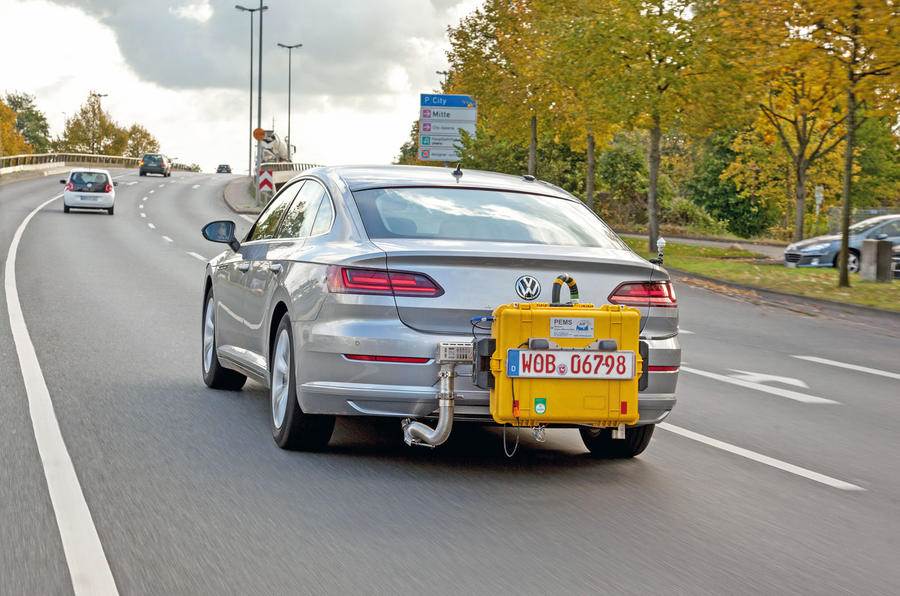 More generally, the basic characteristics of the data collected by the two methods— detailed second-by-second data on an individual vehicle or small number of selected vehicles from PEMS, one-second or half-second samples from a potentially very large number of vehicles from remote sensing—show them to be complementary tools that, deployed together, can produce a more precise and detailed understanding of not only pollutant emissions from on-road transport but also policy performance.

The report says that city–level authorities are working to develop or improve policies that could be better informed with real-world emissions data obtained from remote sensing and other sources. For example, cities considering implementation of a LEZ or other type of vehicle restriction measure could utilise the data to predict the effectiveness of different policy iterations. For instance, a city may choose to restrict all Euro 3 and 4 diesel vehicles believing that this would result in significant air quality improvements since NOx emissions limits for these vehicles are significantly higher than those of Euro 5 and Euro 6. However, it is likely that this policy will not have as significant an impact on air quality as expected due to the fact that in real-world operation there was no significant decrease in NOx emissions from diesel cars between Euro 3 to Euro 5.

Policy examples to tackle air quality problems
TRUE says that some local and regional governments in Europe have introduced access regulations to certain areas of their city, aiming at improving congestion, pollution, noise, and accessibility. The access regulations include Ultra Low Emission Zones (ULEZs) and LEZs, congestion charging, car-free zones, limited access zones, and pollution peak measures. These policies are generally supported by accompanying measures that provide cost-effective and user-friendly alternatives and cover actions such the promotion of public transport, pedestrianisation, active mobility, parking management, subsidies for low-emission vehicles, or the installation of charging points for electric vehicles. Cities across Europe are in various stages of implementing vehicle access regulations. 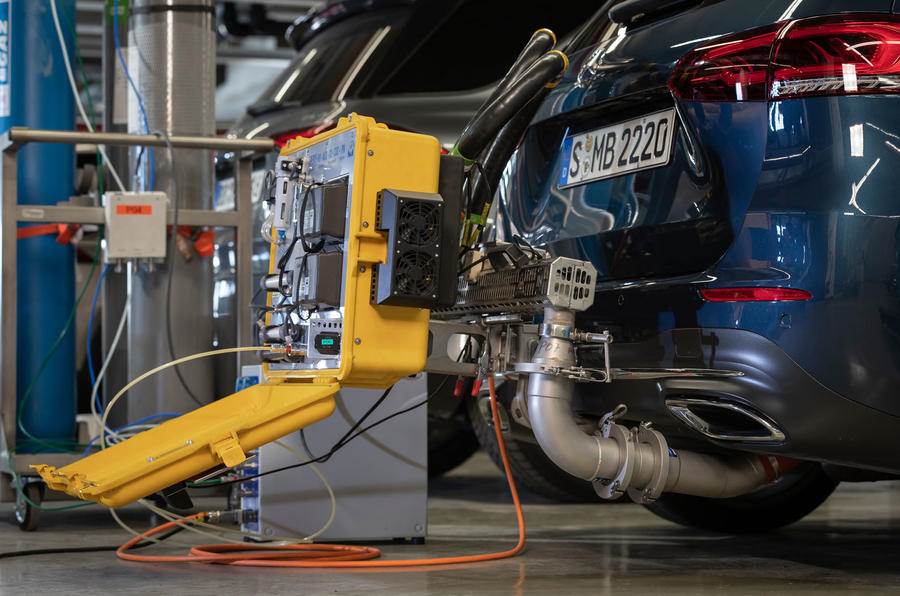 Cities and regions around the world are facing a variety of challenges when implementing vehicle access restrictions and other related policies. The report found certain primary challenges and has given suggestions that could probably act as a learning for other cities to follow, this includes —

Public awareness and acceptance - Policies that restrict mobility or city access are typically unpopular among the general public. That being said, much of the general public living in urban areas within Europe are well aware and concerned about the harmful health impacts of air pollution from vehicle exhaust. Therefore, there is an opportunity to utilise real-world emissions data to explicitly help consumers understand which vehicles are the highest polluters, how much they are polluting, and why they need to be restricted from the urban centres.

Regulatory design, predicting and monitoring impact - As illustrated above, there are a number of different ways to design a vehicle restriction measure and many different details that policymakers must weigh and consider. For example: Where to set the boundaries of the restriction area? Which vehicles types and Euro standards will be restricted? Which vehicles will be exempted? Should a full ban be implemented or should drivers be able to pay a fee for entry? If a fee option is selected how much should it be? Over what timeframe should the measure be phased in? What accompanying measures (such as preferred paring or electric vehicle charging) would be implemented? Real-world emissions data might not be able to inform every one of those questions, but by utilising real-world emissions factors many of these regulatory design decisions can be quantified and compared to each other to allow policymakers to understand the likely emissions impact of their proposed policy. Real-world emissions data can also be collected as a new policy is being phased in to monitor the emissions impact and ensure it is in line with what was predicted.

Legal framework - City level policy makers have restrictions and limitations on the policies they are legally permitted to enact. For instance, city level authorities have no control over the emissions standards that impact new and existing vehicles. In addition, in Europe, city officials who are implementing vehicle restriction measures are typically only permitted to differentiate restrictions based on certain variables such as vehicle type, fuel type, Euro standard, and model year. This can be difficult given the wide range of real-world emissions produced by vehicle models of a given model year or Euro standard. Therefore, city level authorities rely heavily on policies being made at the national and EU level to help them meet their air quality goals. In this case it could be quite helpful for city level authorities to collect and share real-world emissions data with national and EU authorities as they engage on measures to control vehicle emissions.

Costs and resources - The costs of implementing new measures in cities can be high. Resources are required to ensure that the policy is well developed and implemented effectively. These costs include both personnel costs as well as hardware required for enforcing and monitoring compliance. Collecting real-world data is an important part of monitoring compliance and ensuring the desired outcomes are being realised. Ideally these types of policies can pay for themselves through fees and other charging schemes. And when the health benefits of the emissions reductions are monetised these schemes, if implemented effectively, will result in a high benefit to cost ratio.

Enforcement - Enforcing vehicle restriction measures can be a significant challenge. There are a number of questions to be answered as to how to identify which vehicles are permitted within the restriction zone and how to identify when a unpermitted vehicle enters. Many cities are moving towards using license plate recognition systems for this purpose, although foreign vehicles may pose problems if the vehicle is not in the city’s database. In addition, some cities use a sticker or labelling system, where only vehicles with a certain sticker would be allowed entry (this may change based on the air quality on a given day). Some cities use police to help enforce their LEZ. It is also necessary to have sufficient signage and information to inform drivers of the restriction.

West to East export - As LEZs that have focused on restricting older diesel vehicles have grown across Western Europe, many have sold their old diesel cars. A large number of these high polluting cars have been exported to Eastern Europe which essentially results in shifting, instead of eliminating, the health burden from vehicles. Ideally these old vehicles would be scrapped instead of being exported and resold. Cities can put in place incentive schemes for consumers to scrap their old vehicles rather than selling them off. In addition, this issue adds a huge incentive for cities in Eastern Europe to implement LEZs and other similar measures on par with what is being done in Western Europe in order to deter people from purchasing these high polluting imported vehicles. 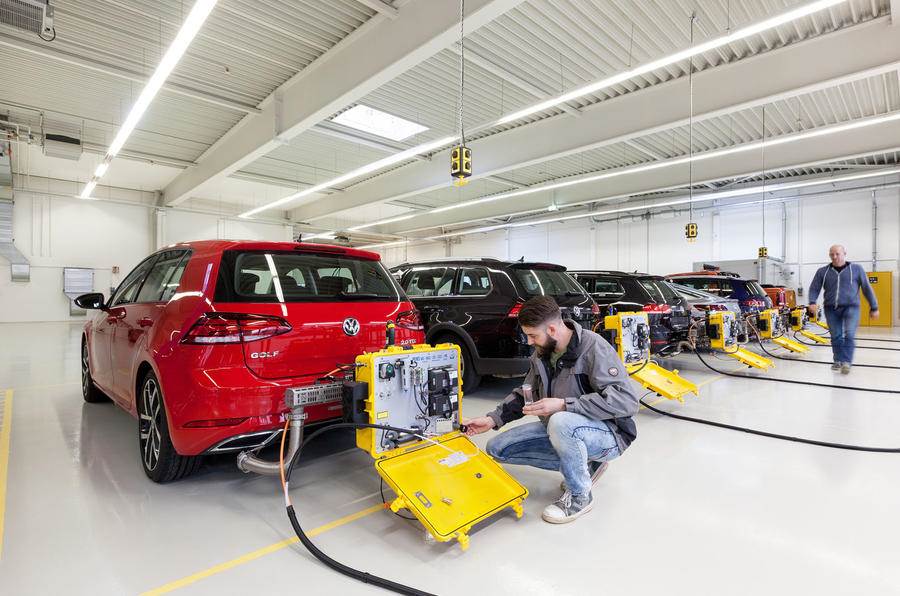 The report recommends that cities can leverage real-world emissions data for a publicity campaign to garner public support for new policies and help consumers make better vehicle purchasing decisions. The policy makers can utilise real-world emissions data to calculate and compare the potential impact of different policy options and select the best option. Installing remote sensing networks to track real-world vehicle emissions in the city and enable rapid policy responses to new information. By sharing the real-world city-level emissions data when engaging with national and European level policymakers to promote impactful decision making throughout all levels of government. And lastly allow exemptions for vehicles that have been shown to have low real-world emissions.