The US-based PPG is one of the largest suppliers of paints and coatings to automakers globally, followed by the Japan-based Kansai Nerolac Paints. Heubach Colour India operates as a 100 percent export-oriented unit (EOU) with nearly 80-85 percent of all products shipped out of the country. 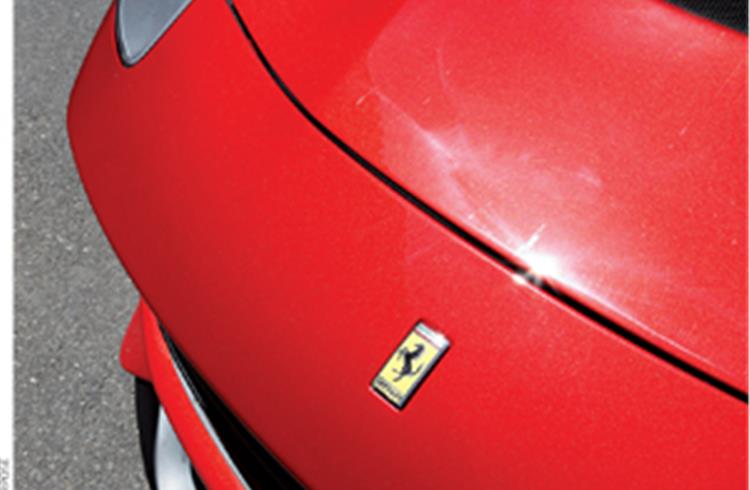 Gujarat is where the action is at present. Thanks to its fast-paced growth and pro-industry strategies, it is one of the most-sought-after Indian states for automakers. Gujarat is also home to one of the largest pigment manufacturing facilities in India.

Founded in 1994 in Ankleshwar, Heubach Colour India, a subsidiary of the Germany-based Heubach Group (a 600-year-old company which has been in the pigment business for the past 200 years!), produces a full range of organic pigments and preparations across the entire colour spectrum of green, blue, yellow and red which are used for applications like automotive coatings, inkjets and colour filters. Among the organic pigments, Monolite and Monastral pigments are used for automotive coatings, Vynamon pigments for plastics, and Heuco pigments for printing inks.

According to Ravi Kapoor, managing director, Heubach Colour India, “We have the largest pigment manufacturing capacity for the DPP Red preparation in India.” But what is so special about the DPP Red? It is this preparation (codenamed DPP 254) which forms the base of the red livery sported by the legendary prancing horses that roll out of the Maranello factory in Italy – Ferrari. Rosso Corsa, also known as race-red, is a colour which symbolises speed and performance and has been synonymous with the identity of Ferrari supercars for ages. Monolite TR Red made by Heubach in Ankleshwar is a super-dispersible, colour-rich pigment preparation which forms the base of this Ferrari-specific red colour (also exclusively called Ferrari-red).

“As pigment makers, we supply to the paint companies which happen to be the direct suppliers of finished colours and shades to the OEMs for the automotive coatings. Though I cannot name the end-automotive clients, we do supply our pigment preparations to PPG (also known as PPG Asian Paints in India) and Kansai Nerolac Paints which are two of our biggest customers,” reveals Kapoor.

The US-based PPG is one of the largest suppliers of paints and coatings to automakers globally, followed by the Japan-based Kansai Nerolac Paints. Heubach Colour India operates as a 100 percent export-oriented unit (EOU) with nearly 80-85 percent of all products shipped out of the country. Total pigment preparations for inks, paints and plastics contribute 40, 35 and 25 percent respectively of all operations. Within the paint vertical, the share of pigments suitable for forming the base for the automotive coatings stands at 30-40 percent. Plant 1 (green and blue pigments) was the first to go under operation in 1995, followed by the second facility which churned out yellow pigments while the third facility, producing the red pigment preparations, came up in 2005.

“Since our inception in India, we have been growing at a healthy rate of 15-20 percent year on year,” adds Kapoor.

Monolite TR pigments are dry, dispersible, transparent preparations based on encapsulation of fine particles of organic pigments, suitable for colouring of metallic base coats for two- and four-wheelers. These preparations being transparent in metallic finishes provide rich opaque colours with exceptional gloss and haze-free finish while the stability of dispersion lends these colours a long shelf-life. Kapoor explains that “the paints used for the automotive coatings must endure extreme conditions such as severely high/low temperatures, dust, chemicals used for cleaning the cars and many other factors. These stringent requirements and complexities can be clearly seen in our production processes which are tightly guarded in terms of inspection and quality controls.”

The Monolite TR pigment preparations are supplied in the form of solid granules. The suitable resin systems which are mixed with the pigments are alkyd-melamine, polyster-melamine, thermosetting acrylic-urethane, alkyd, acrylics and others.

Dispersion at 2-5 percent loading of Monolite TR pigment preparation in a suitable resin provides a rich mass colour with higher transparency for attractive metallic finishes. These preparations, while being transparent in metallic finishes, provide rich opaque colours (reds and yellows) on a white background.

Kapoor elaborates that “recall of cars due to fading colour is a huge liability and the liability assurance is very high. The pigment preparations used in making paints specifically for automotive coatings have to be approved by the paint companies. Besides being highly stringent, the approval process is a very tough procedure and, at times, spans two to three years. This also acts as a substantial entry barrier for the new players entering this business. The samples undergo multiple tests including the panel of pigments exposed to sunlight for 1,000-5,000 hours. For example, the panels are put through the Florida test where they are exposed to direct sunlight and other damaging forces of nature such as the ultra-violet rays, heat, and moisture to evaluate their long-term durability.”

Test of the best

Heubach Colour is the only pigment manufacturer in India, which is capable of in-house testing of its products. In its quality control labs, the company conducts testing protocols which covers all weathering tests to examine the durability, anti-fading and gloss retention features. “Besides being duly certified by the respective authorities, our labs are capable of testing the products as per the prevailing quality regulations of Europe and Japan. We are also capable of making the paints and paint panels,” mentions Kapoor. The company has recently introduced pigment preparations for paints used by the Indian two-wheeler industry. “These pigments form the base of paints which are high-gloss colours with good quality of transparency,” informs Kapoor who believes that the pigments for four-wheelers must be more durable as compared to those used for two-wheelers.

Commenting on global automotive colour trends, Kapoor says that “advanced economies prefer more of black, white and silver colours while developing economies with a younger population prefer colours like red, yellow or purple. For example, black is the most preferred colour in Japan, silver and white in most European countries, while black and white rule in Korea. OEMs have to adjust according to the country-specific colour demands and that’s where the requirements are generated.”

Though he counts on India as a big market in the coming year, Kapoor believes that the US, Europe and Japan would continue to drive the larger chunk of demand for automotive paints in the foreseeable future. He clarifies that “India is still a small car market. A small car or a hatchback consumes lower volume of paint for coating as it has a smaller surface area to be painted and lesser number of paint layers are used as compared to big luxury saloons.”

The company has so far invested Rs 100 crore in its R&D activities and plans to continue efforts in this area and product development capabilities. “We anticipate continuous growth for the next 10 years while I believe that we will grow at a rate of 15-20 percent in the automotive coatings business. Our aim is to be one of the top five pigment manufacturers in the world,” says Kapoor.

The company has also contributed substantially to development of the local region. Ankleshwar is known as being a hub for the chemical and dye manufacturing industry and, hence, is one of the most polluted cities in India. “Producing pigments is a highly polluting business. However, we produce in a very responsible and sustainable manner. Euro benchmarking in environmental management is the correct recipe for the long-term sustainability of pigment manufacturing practices,” says Kapoor.

Since its inception, the company has been working on a long-term plan of planting trees to compensate for the carbon dioxide emission from its production plants.

As a result, over 15-odd years, Heubach Colour India has planted around 25,000 trees in and around its facilities, taking the total number of plant species to 296 from 30 in 1998. The biodiversity programme has also resulted in 37 species of birds being spotted at the Heubach facility sites from barely two species 12 years ago.

Other environment-friendly practices include the installation of a power plant fuelled by natural gas, usage of hot water and waste heat for steam-based requirements and recycling of waste water and solid wastes.