A report on how Hero MotoCorp is plotting a major comeback in the growing premium motorcycle segment. 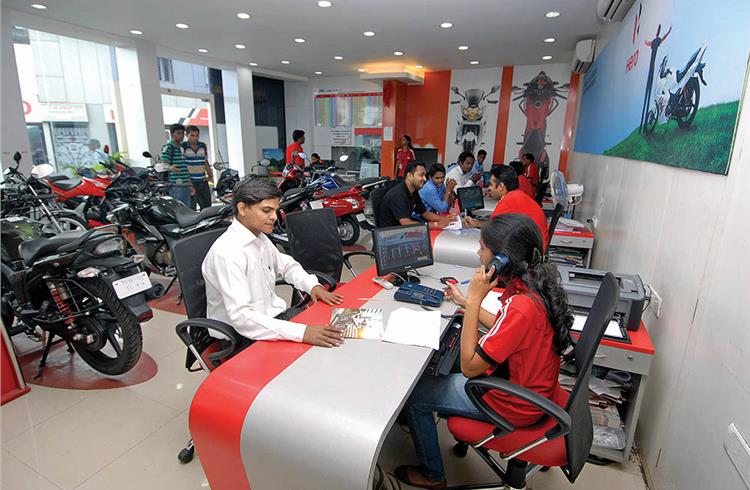 Hero MotoCorp leads the domestic two-wheeler market but it has lost ground in the premium motorcycle segment where it was a first mover.

"This will be the year of premium. Hero re-entering and conquering the premium segment in India," declares Dr Markus Braunsperger, CTO, Hero MotoCorp, a little while after unveiling the Hero XPulse, one of the salvos getting ready to hit the market, at the Auto Expo 2018 last month. The 200cc XPulse is a successor to the Impulse that has been discontinued.  With more power, higher ground clearance and longer suspension travel, the XPulse promises to offer better off-roading capabilities than the Impulse and tap the growing trend of adventure motorcycling. With a reduced seat height and a not-to-intimidating power of 18.4hp it is also positioned as a motorcycle for regular use. The enduro-motorcycle design that perhaps didn't appeal to all, high seat height and a not-so-powerful performance were seen as some reasons why the Impulse didn't succeed. 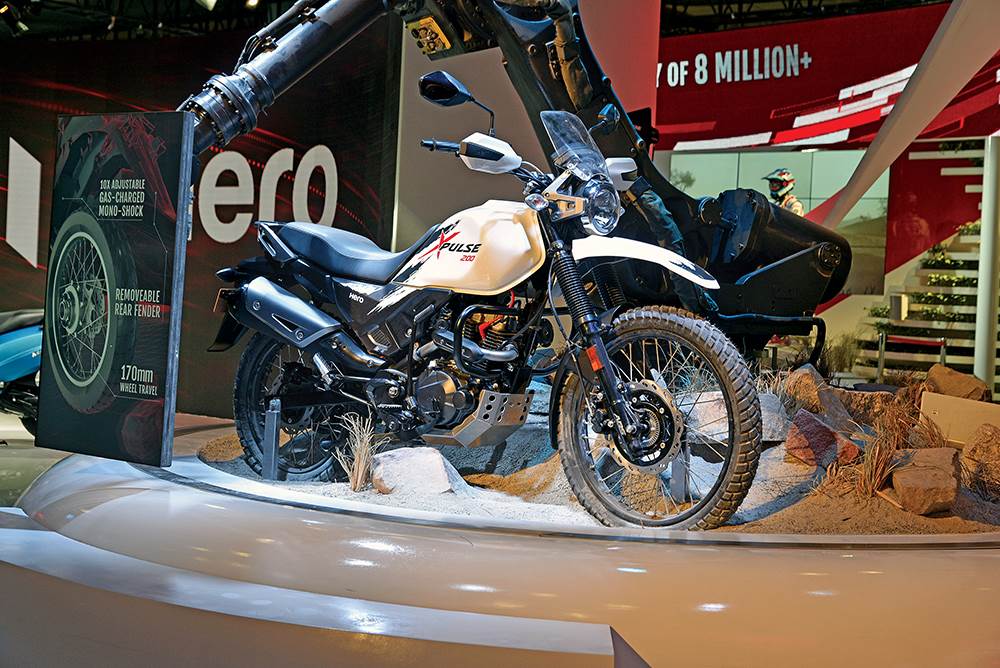 With those issues addressed by the XPulse, Markus is confident that the motorcycle will find good number of takers once it goes on sale during the second half of 2018.

Through its erstwhile joint venture with Honda, Hero was the first mover in the premium segment with the 150cc CBZ. Not so long ago, it enjoyed a segment share of around 25 percent. Today, the figure is in lower single digit. "This is basically why we did shake ourselves with a challenge to come up with a host of new products and actually the 200cc would be a platform for new premium products. The first one with the Xtreme 200R, the new one is the XPulse 200. Expect more to come because we are working more on our premium portfolio," Malo Le Masson, head – global product planning, Hero MotoCorp tells Autocar Professional. 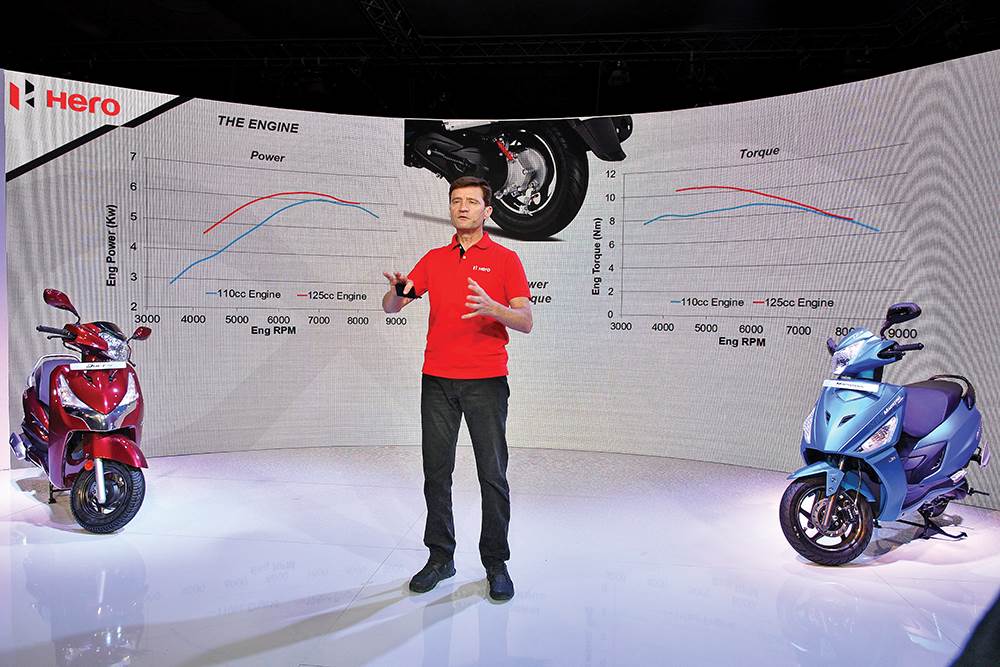 Dr Markus Braunsperger and his team have taken a bottom-up approach in building a new product portfolio.

The Xtreme 200R, which was unveiled two days before the XPulse, will lead the fresh offensive by Hero in the Indian premium motorcycle market. Within this segment, the focus is on the sub-segment of motorcycles priced at up to Rs 100,000. "If you look at the premium market in India, 70 percent is below Rs 100,000. So this is why first we are concentrating on bringing the Xtreme 200R and the XPulse 200. We are looking first at this segment because from a volume standpoint, this is the biggest," says Malo.

Like the CBZ and Impulse, the Karizma was another first mover in its segment that has fallen behind. That brand too could get a serious makeover as part of the company's aggressive comeback strategy for the premium motorcycle market. "To do it right, we really have to focus and do it the right way. From this perspective I agree with you, but we need to concentrate on what is really right because the segment has moved. We need to talk about performance, about the style of the bike but we really have to explore to get the right ingredients," says Markus.

Once the 'core premium' segment is addressed, Hero MotoCorp would enter the midsize motorcycle game. That would also make it a challenger to Royal Enfield, which is currently dominating the segment. This segment of 250-500cc motorcycles is witnessing a rise in activities from various OEMs. The latest one is TVS Motor, which launched the Apache RR310, a faired 310cc motorcycle. Sources tell us that Hero may launch a 300cc motorcycle, based on the XF3R concept which was showcased at the 2016 Auto Expo. Understandably, company officials won't comment on it clearly! "For us in R&D, the work never stops. We are always ahead of what we are showcasing today," says Markus. 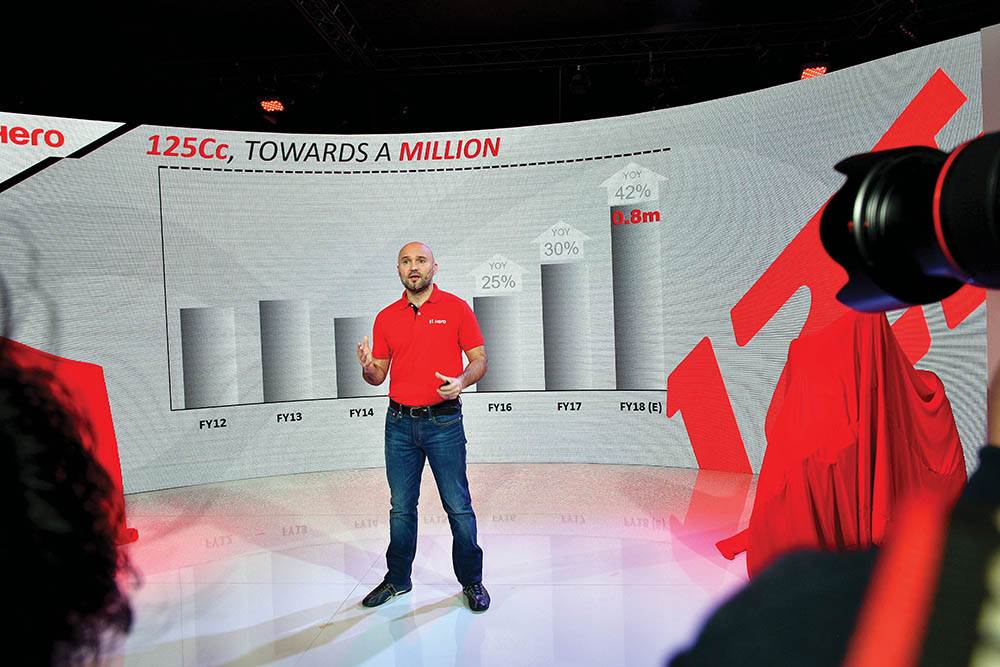 As the Indian economy grows, overall consumer preferences are also changing. In the two-wheeler industry, growing aspirational levels are resulting in the growth of the premium segment, as well as premiumisation of products in all categories. The huge base of youth is also influencing market trends. Many, if not most of them, prefer to ride more attractive and more powerful scooters and motorcycles.

Hero MotoCorp has had a stronghold in the commuter motorcycle segment built over years. However, that strong success may also pose a challenge to its quest to be a strong player in the premium bike segments too. That's because unlike earlier, the premium segment is no longer a very niche part of the market. It will have to take steps, beyond products, to connect with and be accepted by the youth.

Therefore, Hero MotoCorp's sales and marketing team is working on a "big plan" to realign the OEM's image in the market, especially among consumers of premium motorcycles/scooters. Key part of the strategy is to set up experience centres in various places which would also showcase "the showroom of tomorrow".  These centres could also be co-developed with partners. "Those experience centres are going to be highly experiential, highly entertaining so that the youth come there as if they are going to a biker's café," says Malo. Later, these centres could also become sales points for premium products. These products, to gain acceptance among premium bike buyers, would be developed to be competitive with a "unique positioning, competitive in terms of technology and performance" and the price too. 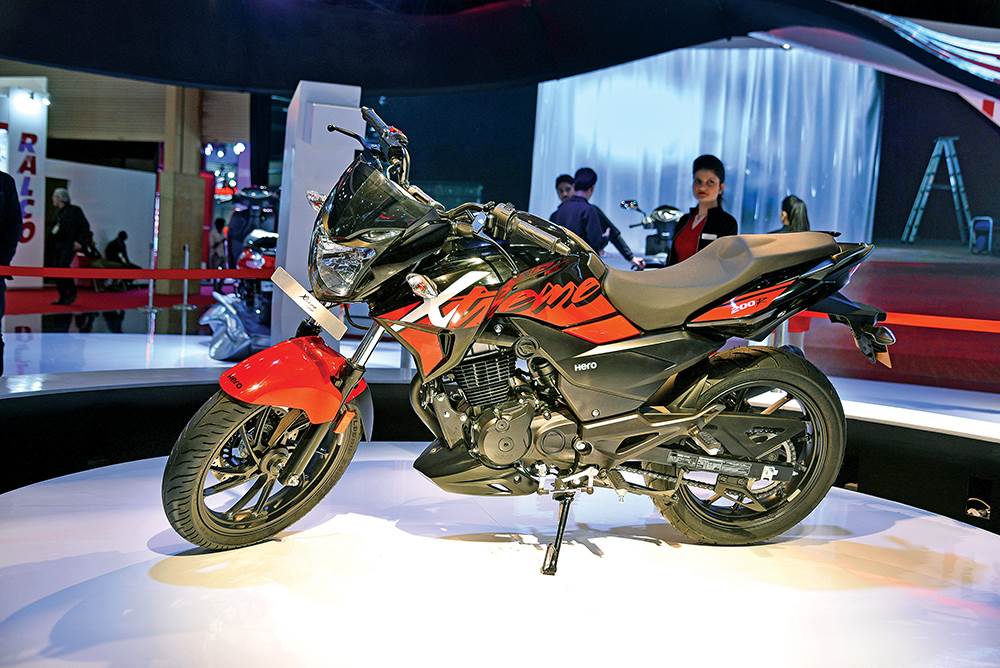 Even as the strategy to be a significant player in the premium motorcycle space takes shape at Hero MotoCorp, the team is also doing something similar in the scooter space. With over 30 percent of the domestic two-wheeler industry's volumes coming from scooters, the OEM can't afford to go slow here. Like the way the mass motorcycle market is graduating from 100cc to 110 and 125cc, the 125cc segment is the next big thing in scooters. That explains the introduction of the 125cc versions of the Hero Duet and Maestro Edge scooters. In that evolution, Hero sees an opportunity to connect with the youth. "Although today the main offer is more on the core commuter family – unisex, durable, basically the Duet 125 – we were adamant that we had to also come with the one which is more catering to the young, that is 18-24 college students and basically this is the Maestro Edge story," says Malo, a specialist in product strategy. The addition of the engine start-stop feature in these scooters is aimed at enhancing fuel efficiency as well as adding to the premium quotient.

In an evolving market that is also witnessing the emergence of megatrends, technology prowess becomes all the more critical for sustainable growth. Hero MotoCorp, which embarked on a solo journey since December 2010, has been taking steps to build its proprietary technological strength. Markus, a former R&D head at BMW Motorrad, was given the responsibility. Has Hero reached where it wants to be, in terms of engineering capability? "If you ask an engineer he will always say no, but we are in a good way and I think this is important that we are moving. We have the mojo. Seven launches in 48 days, I have never experienced in my previous life!" says Markus. 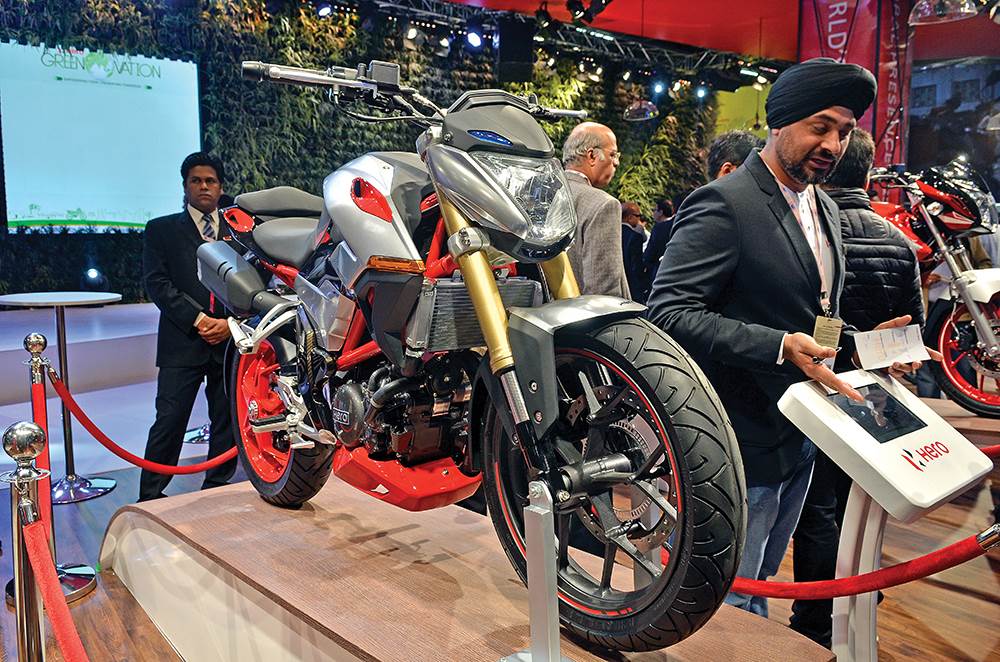 The company may launch a 300cc motorcycle, based on the XF3R concept displayed at Auto Expo 2016.

Markus and his team are working on multiple propulsion technologies. While electric mobility is creating the buzz, there's much need to be done to make electric two-wheelers viable, he says. In addition to electric two-wheelers, Hero MotoCorp is also working on other concepts as well. "We do work on different other concepts as well. Because in the end, probably we will not be just only EVs. It will be, let's say, an amalgamation of the technology that is available," says Markus. 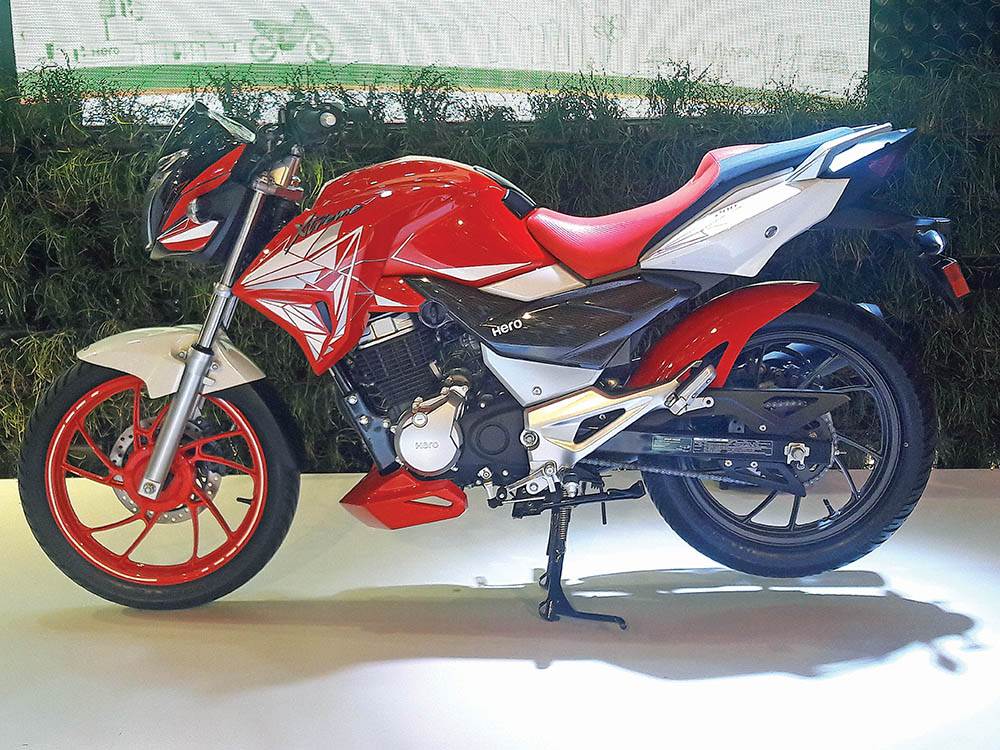 Since joining Hero MotoCorp a little over three years ago, Markus and his team have been working on a bottom-up approach to protect the OEM's turf in the bottom of the market pyramid. The plan is to gradually offer more premium and higher-value products without coming out with something that is "far away" from where Hero operates in, which will make consumers ask "what is this?". A foray into rally racing, like the arduous Dakar Rally, was part of the strategy to move up in the product portfolio. "It will take us time to develop the brand as well. This is one part of the story why we went into rally racing, now we have the arguments. Now I can say, "Guys, we have tested this in the toughest conditions," because we know the toughest conditions. We have been there. So from this perspective, I think the story becomes credible," says Markus. Now, it seems, a new story has just started for Hero MotoCorp.