The fourth annual Global Automotive Forum (GAF) held from October 18-19 was special for multiple reasons. While 2013 marks the 60th anniversary for China’s automotive industry (when its first automaker, First Automotive Works was founded), the year also sees the 30th anniversary of first saloon assembled in China by Shanghai Automobile Industry Corporation (SAIC) and the construction of the first expressway in the country. 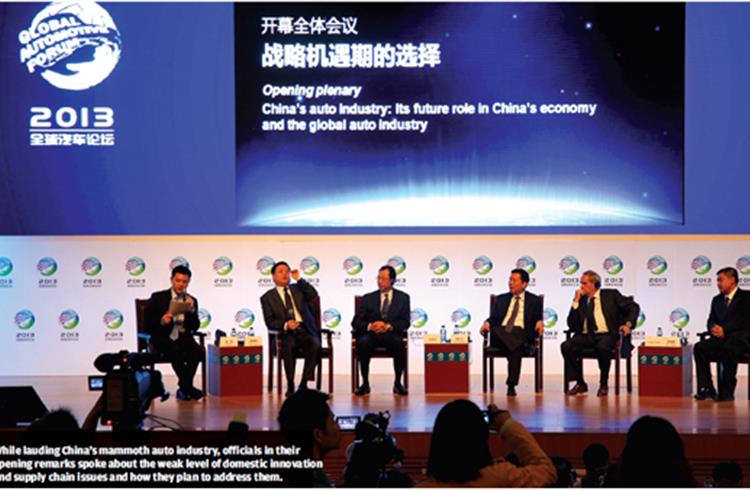 The fourth annual Global Automotive Forum (GAF) held from October 18-19 was special for multiple reasons. While 2013 marks the 60th anniversary for China’s automotive industry (when its first automaker, First Automotive Works was founded), the year also sees the 30th anniversary of first saloon assembled in China by Shanghai Automobile Industry Corporation (SAIC) and the construction of the first expressway in the country. Furthermore, the China Council for the Promotion of International Trade (CCPIT) had chosen Wuhan for this year’s GAF – a Tier 2 city as per Chinese city standards but massive enough to raise solid doubts about our own definition of a Tier 1 city in India.

While the globally not-so-popular Wuhan is not only an upcoming economic powerhouse, it is also an important location to what Chinese government officials call as the ‘rise of central China strategy.’ Considered as the largest logistics and distribution centre in the inland China, thanks to its connectivity with high-speed rail network, largest inland port besides the expressways, Wuhan is also known to be home to a cluster of automobile and auto ancillary makers with the most prominent name being the Dongfeng-Citroën Automobile Company.

With the theme being future development of the auto industry – target, strategy and implementation, the two-day conference saw participation from over 700 automotive industry officials from around the world including government representatives. Interestingly, the conference seemed to depict China’s all-new and rather liberal approach towards laying down the future growth roadmap for its automobile industry. For the first time, officials from the government and local companies recognised both the shortcomings and challenges which are deterring the growth of the Chinese auto companies and industry as a whole.

Guess that’s what it takes especially when you are the largest automobile market in the world but without even a single home-grown brand that is as prominently known as the many European brands which sell in big numbers in China.

The star attraction of GAF 2013 was the hi-profile and power-packed session with participation from Alan Mulally, president & CEO, Ford Motor Company, USA; Li Shufu, chairman, Volvo Car Corporation and Geely Holding Group, China and Dr.JochemHeizmann, president & CEO, Volkswagen Group, China. The session raised a question on the need to establish greater cooperation and collaboration for ensuring sustainable development of the auto industry and Mulally began with enthusiastic words – “Our answer at Ford is absolutely yes.” Explaining his outlook, he said that “we are touching sales of nearly 80 million units, 40 percent of that would come from Asia-Pacific led by China while 30 percent would come from European countries, USA and Africa. While we continue to cut down the carbon emissions, improve the internal combustion engines (ICEs), composite materials, make our cars lighter, work on alternate fuels including the use of hydrogen, design electric cars and raise the apt infrastructure, we do have to join hands to establish a cleaner world. At Ford, we have always believed in opening the highways to all mankind, we must ensure that we all collaborate and provide the best technology to our consumers.”

Agreeing to collaborate, VW AG's Dr Heizmann said “We need to find the right balance between individual mobility and environmental requirements. The most important need of the hour is cooperation. The auto industry has to reduce its dependence on water and energy resources and at VW, we have reduced the consumption of water by upto 90 percent in our advanced paint shops. Since 2005, we have reduced fuel consumption in our China fleet by five percent. Our fuel efficient TSI engines are equipped with start-stop, brake recuperation technologies and are built on lightweight platforms, which are our initiatives for better fuel economy. The new Golf model saves around 100kg as against its older model. With the Porsche Panamera plug-in hybrid, we are offering a better car in China. Our priority will be to focus on plug-in hybrid cars in the foreseeable future while pure electric cars will happen later. While we know that battery technology needs a lot of advancement, we all are working towards the same.”

He also appreciated the policies laid down by the Chinese government to promote the e-mobility and the infrastructure and added that “VW will do its best to support these policies.”

Meanwhile, Li Shufu announced the beginning of Volvo Cars' nationalisation project in China. While Geely Automobile Holdings had bought Volvo Cars in 2010 from Ford (the biggest Chinese auto investment overseas), it was not getting due approvals from the Chinese government to set up plants to roll out Volvo cars in China. However, with approvals in place now, Shufu said that “the approval of Volvo’s production project marks the beginning of Volvo’s great future in China. Our immediate priorities are to improve Volvo’s brand recognition in China along with its aftersales service network while we continue to invest and learn from our R&D initiatives. Geely will remain a brand for the masses while Volvo cars will be positioned as luxury products, as both brands would continue to have their own product lines. These synergies will help us lower the development costs eventually.”

Industry experts believe the Geely-Volvo combo will push the acceptance of this made-in-China brand, translating into increased exports. While China’s annual production and car sales stand around 19.3 million units, the world's largest car market exports only five percent of that.

GAF 2013 was bent on seeing tomorrow today. According to Frank O’Brien, executive VP (Asia), Magna International Inc, Canada, cars by 2030 would have more functional exteriors, multipurpose interiors and many other futuristic applications. However, he added that “legislations play the most important role in introducing new technologies. The speed of legislations is substantially holding back a lot of new technologies.”

California-based Pinnacle Engines made its presence felt at GAF 2013. “While everyone is talking about electrification of vehicles, we don’t exactly know by when the technology would be ready. At Pinnacle, we have mastered post-piston technology, which is a completely different engine design as compared to conventional engines and delivers a guaranteed improvement in fuel economy by upto 50 percent. Our first project will see commercialisation in India as early as 2015 in a two-wheeler application,” said Ronald Hoge, chairman and CEO, Pinnacle Engines.

Discussing the challenges faced by Chinese automakers in tapping foreign markets, Bill Russo, president, Synergistics Ltd and senior advisor to Booz & Co, USA and a Chrysler veteran who has spent over 9 years in China, said: "While we all understand that it is essential for any growth-oriented global car company to do business in China today, the Chinese brands might take another 5-10 years to find substantial recognition among car buyers in mature western markets because they are not first-time car buyers. Most Chinese automakers have grown inorganically (through acquisitions such as SAIC-GM, Geely-Volvo, Dongfeng-PSA) which means they have limited indigenous capabilities. One which is most developed in this regard is the Great Wall Motors which has grown organically.”

According to him, around 74 percent of all passenger vehicles sold in China in 2012 were either foreign brands or models made under JVs. “Hence the fragmented auto companies in China need to first establish a successful consumer base in their own domestic market and rework their image of building ‘cheap cars’ to ‘affordable cars’ globally. They should overcome main failures by first setting up a stable domestic structure to compete globally, make global HR talent pool, setup quality conscious suppliers globally and also the financial and after-market services to win opportunities in other markets,” concludedRusso.