Datsun’s second model, the Go+, is positioned as a family mover. Sumantra B Barooah finds out what the car offers to users and how it will fit in Nissan’s India strategy. 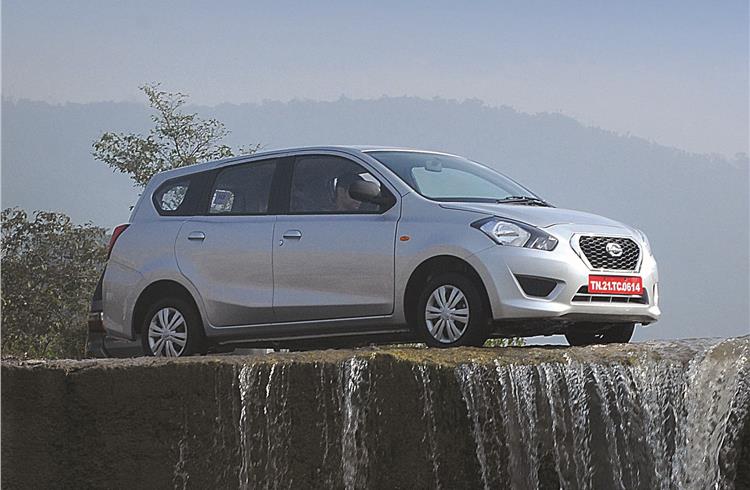 If the Datsun Go is for the couple and its kids, the Go+ is for the family, including grandparents. What it has to do is tap the growing MPV market in India, with a better price proposition. The car is expected to sport a price tag of a little over Rs 4 lakh, which is about Rs 30,000 more than its hatchback sibling. The competitive pricing is thanks to the excise benefit the Go+ enjoys due to its sub-4-metre length and the 1.2-litre petrol engine.

With its strength of high cabin and luggage space, the Go+ would also target sedan customers. “With the sub-4-metre length and additional volume, what you get in a sedan is what we are offering in an MPV. So maybe this is going to rewrite whether we need a compact sedan,” says Sundararajan Krishnan, assistant chief vehicle engineer, Renault Nissan Technology & Business Centre India. It is to be noted that Datsun already has a sedan model called OnDo, which is available in Russia currently. Budget buy
With its price and utilitarian offerings, the Go+ is a car mainly for customers with a tight budget. What it offers will appeal more to the left brained, which in other words are people who look more for utility than creature comforts or frills.

The Go+ has the same face as the Go, but it has a newly designed hatch. The interior is spartan. Like the Go, there are signs that it is built to a stringent cost target. For example, you don’t get a lockable glovebox to keep any valuables and you can open the hatch only through the boot release lever near the driver’s seat.

Nissan says some of these was also driven by market research. Some research clinics in India revealed that customers do not lock the glovebox and use other space in the car to keep a cellphone or knick-knacks. But if there’s a market demand now, Nissan will opt for a seat with a lockable compartment underneath rather than investing in a redesigned cockpit.

“Most of the usage pattern is that we haven’t seen that people are locking (the glovebox). There are many times we make the customer to go and use certain utilities in a cockpit. You typically see people come and just keep the cellphone and papers there. While it is not necessary that people lock the glovebox but then you have an additional 1.5 seat here,” says Krishnan.

Nissan has taken a conscious decision to get the technical and utility part right, before increasing features and spruce up the vehicle’s appeal to a wider audience. You get good driveability in the Go+. I could negotiate many of the turns in the winding roads of Rishikesh without too much shifting of gears. The Go+’s gear ratio is the same as the Go, but the peak torque kicks in at a lesser rpm than the Go. There are some other modifications too due to the extra mass of the vehicle. In terms of weight, the Go+ is 30 kilograms heavier than the Go.

To take care of the extra mass and the shift in the centre of mass compared to the Go, there are tweaks in other areas too. The steering system has been fine-tuned and so is the suspension setup. As a result, the Go+ eats up the potholes and offers a comfortable ride to its occupants. Like the Go, the Go+ wears 13-inch tyres and there’s a big gap between the tyre and the wheel arch. Nissan engineers say they opted for that over a bigger tyre size to offer a larger suspension stroke for better ride quality. At around 217mm, it is the best in its class.

Nissan’s engineers are taking one step at a time. “We will evolve and then we will start sprucing up things. So the base platform is set,” says Krishnan. Now that the Go+ is ready for launch (on January 15) Krishnan and the team will work on ways to refine and evolve both the Go and the Go+ in various stages over the next couple of years.

As for its seven-seater positioning, the last row in the Go+ can be good only for small children. Overall, the car will have a stronger appeal as a five-seater with large luggage space than a true-blue people- mover. That pitch will also perhaps help to attract the sedan buyers. The Go+ will have three variants – D, A, T. An accessorised version called the T+ will be for those who prefer some aesthetic appeal.