German materials maker Covestro has embarked on its next phase of growth with a sharp focus on the Asia-Pacific and is targeting Indian automakers and suppliers for use of its polycarbonate-based lightweight materials. 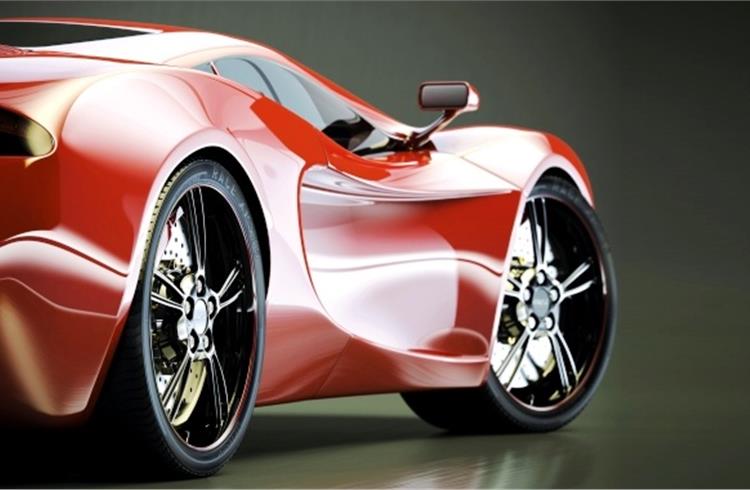 Covestro, which was formerly a part of Bayer Material Science, officially separated from the Bayer Group last year, and has successfully established itself as a global materials provider to many industries including automotive components and OEMs as well.

It was created as part of the restructuring of Bayer AG from the former business group Bayer Polymers. Covestro manufactures and develops materials such as coatings, adhesives and sealants, polycarbonates (CDs, DVDs), polyurethanes (automotive seating, insulation for refrigerating appliances).

The company’s automotive business is among its biggest revenue drivers and in India too it contributes to around 25 percent of the business.

Apart from automotive, Thane-based local arm, Covestro India caters to other industry segments such as construction and electrical and electronics. With three manufacturing facilities across the country at Greater Noida, Ankleshwar and Cuddalore, and over 386 employees, the company is looking to embark upon the next phase of growth in the region now.

Covestro’s chief financial officer, Frank Lutz strongly believes in the potential that lies in the Asia-Pacific region, especially India which has been witnessing a double-digit growth. “India comprises roughly 20 percent of our APAC revenues and it will be a formidable part of the Covestro growth strategy in the region,” he says.

Lutz also highlights that Covestro is increasingly anchoring sustainability at every level, and that is a part of the company’s core values. The objective is conserving the environment, advance society and at the same time create economic value. The company has, therefore, established a series of challenging and measurable targets it wants to achieve by 2025. Among these is the plan to halve greenhouse gas emissions per metric ton of product produced relative to 2005.

New products on the anvil 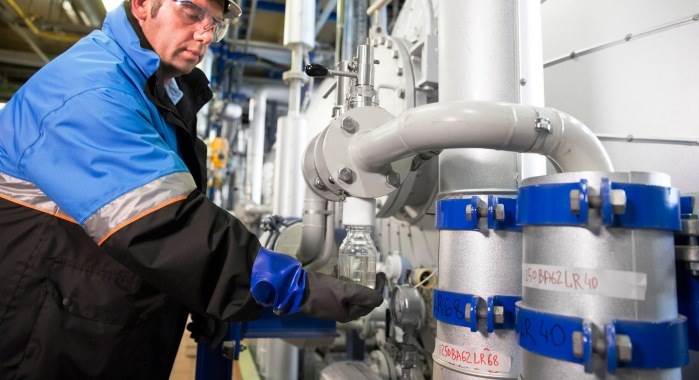 Covestro’s CO2-based manufacturing of polyurethane saves up to 20 percent of the traditional crude oil-based raw material.

Keeping in mind its strong focus on the automotive sector, Covestro is planning to showcase a new vehicle concept intended to promote electric mobility.

Developed in close collaboration with design students and partners in the auto industry, the concept is based on pioneering plastic technologies. It is to be presented at the K 2016 plastics trade fair (Dusseldorf, October 19-26, 2016), in the form of a contemporary electric car incorporating current trends in exterior design, including a seamless front end, innovative holographic lighting, polycarbonate wrap-around glazing and the use of sustainable coating and adhesive systems.

Covestro has worked closely with various partners on the new automotive concept. The company invited students from the Umea Institute of Design in Sweden and the Northern Works design agency in Finland, to Leverkusen. The purpose of the project was to shift existing boundaries between aesthetics and materials and to develop new ideas for design and functionality for future drivers.

Covestro is also breaking new ground when it comes to polycarbonate manufacturing. In 2016, the company inaugurated a new plant on stream at its Dormagen site in which carbon dioxide is being used for the first time as a raw material. A CO2-based precursor for the production of polyurethane foam will soon make its market debut.

The company is also planning to license out its CO2-based polyurethane production technology to other players in order to enable faster adoption. It is also collaborating with partners in industry and academia to develop further components and potential applications for CO2-based polyurethane.

China forms a very large chunk of the APAC market for you right now. How do you see demand pan out there and what will be the role of the Indian market in your APAC strategy?

I agree that right now we are more dependent on China and that is because almost half of our volumes in APAC come from the region. However, for Covestro on the whole, China only provides 15 percent of the volumes. It is important, but not too important. Now for us, APAC is still the smallest among the three regions we operate in, and we want to grow it. Will China be able to provide that growth going forward? To some extent yes, but there are other countries that need to provide that growth, and the first among them is India. Over time, the percentage of China’s contribution to volumes in APAC will fall as India is growing faster than China.

What is India's current share in the APAC market for Covestro?

India contributes to around 20 percent of the total APAC volumes right now. If you look at countries competing with India for market share, there aren’t many. There is great opportunity for India to gain a higher share in the APAC market.

What sort of product innovation is Covestro working on, especially for the automotive industry?

In India, we are currently working with a lot of big OEMs. On the process side, we do a lot of work on producing materials which have advantages in terms of reducing the overall weight of the parts.

This not only helps in increasing the fuel efficiency of a car but also improving overall economies. Lightweighting is a key focus area for us and we are providing a host of solutions for various components such as automotive lighting, steering wheels and composites. The automotive industry is one segment where Covestro can differentiate itself. 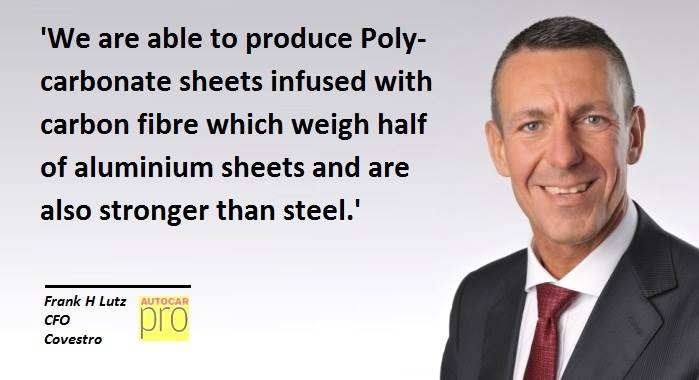 What conventional materials can polycarbonates replace in terms of automotive usage?

Glass for windscreens is one, but it is among the most over-rated areas for the use of polycarbonates as well. Out of the 90 million cars that are produced every year, windscreens would only require around 2kg of polycarbonate, which would mean a size of only around 180,000 tonnes per annum.

I’m not saying this is negligible but it is not as big as everyone always thinks. It will be a good additional business to have, but the future success of polycarbonates does not depend on it, as many would think.

If not glass, then which automotive segment is the polycarbonate industry looking at for growth?

Metal, more of which will be replaced by carbon fibre- reinforced polycarbonates in the future. A lot of R&D from our side is going into this area and we are at the moment able to produce polycarbonate sheets infused with carbon fibre which weigh half that of aluminium sheets and are stronger than steel! Of course, it is going to take some time before you see the implementation as automotive product cycles are much longer. As a result, we are targeting the IT industry, where development cycles are really small. Therefore, by 2017 we are hoping to see the first CPU cabinets made from carbon fibre reinforced polycarbonate. It would also bring down production costs, as polycarbonates have much better cost structures than metal.

What sort of cost savings are we talking about here?

We are confident that we can produce carbon-fibre infused polycarbonate sheets at half the cost of equivalent aluminium sheets.