Concepts show Hero’s and TVS' vision for the future 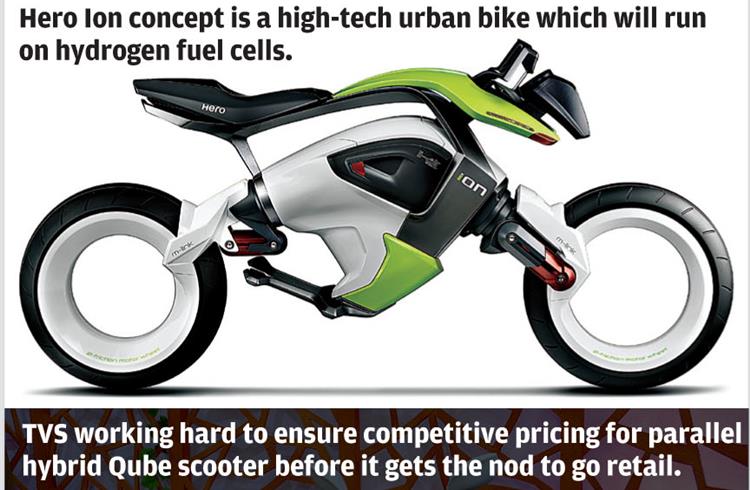 A tech-charged Hero MotoCorp took the lead in showcasing concept vehicles. Its RNT, powered by a liquid-cooled, 150cc diesel engine, has cargo-carrying capabilities. According to company officials, Hero is working on a turbocharged version and also to equip the RNT with an electric motor thereby offering different modes to the rider. While the diesel-run two-wheeler will make it by FY2015-16, the timeline for the proposed hybrid is yet to be disclosed.

Hero also displayed the all-electronic eco-friendly Ion, which will be powered by hydrogen fuel cells and advanced batteries, and equipped with super capacitors to smoothen the energy requirements of braking and acceleration. The open wheels contain hubless electric traction motors that use zero friction magnetic levitation technology, which doubles up as brakes when needed. Core basic information is available in the compact instrument cluster, which transmits all information to the rider through his helmet.

Hero also displayed a lightweight urban electric bike with innovative features such as removable battery pack and smartphone connectivity. The 35kg concept highlights that battery operated EVs for city riding are not far away.

Meanwhile, TVS’ Qube, displayed as a concept at the 2012 Expo, has now graduated to a 110cc petrol engine (as against the 90cc engine) with a limp-home option for the new Qube concept. The hybrid Qube scooter uses 800 watt rear wheel hub-mounted electric motor, which runs on lithium ion battery.

TVS’ R&D team has managed to decode the costly lithium ion battery technology, thereby generating increased possibilities of reducing the end price. The team working on battery technology has successfully created its own battery management system (BMS), which enables them with the capability of combining the lithium ion cells into packs together to form a full battery configuration. Hence, the company can now keep the costs in check by sourcing only the lithium cells over sourcing the entire batteries. According to company officials, splitting the battery into smaller packs enhances the flexibility in the form of quick replacement with fully charged counterparts to keep the scooter on the go.

The officials claim that the new 108kg Qube hybrid concept can hit a maximum speed of 75kph (35kph in pure electric mode). The parallel hybrid concept is built with four modes of operations — hybrid economy (vehicle starts on battery and automatically switches over to engine after 35kph), hybrid power (engine and battery both function to maximise acceleration), electric (zero emission) and engine (conventional fuel consumption). The project is still some time away from getting a commercial nod from the management.

TVS also showcased a super stylish scooter concept — the Graphite. Inspired by the design of a military aircraft, the concept is designed with the inputs from the TVS racing team. While engine specs were not disclosed, the Graphite is equipped with an AMT gearbox (a first for any scooter) and standard ABS. The scooter concept is far from heading into production at this stage.

Hero takes the leap in scooters

While the biggest scooter launch at the Expo was HMSI’s 125cc Activa, Hero MotoCorp surprised industry by unveiling three impressive scooter models across the spectrum of commuter (production-ready 111cc Dash), executive (stylish 125cc Dare) and premium (large-bodied, 157cc ZIR variants) segments. Since nothing short of waging war will be needed to take on HMSI's unrivalled leadership in the scooter segment, Hero’s aggressive attempt cannot be ignored. In a recent interview, PawanMunjal, MD and CEO, HMCL, said that “to maintain leadership, one has to always stay ahead of the curve. You can do that in two ways — by anticipating change in the customer preferences or by driving that change yourself.. We are rapidly expanding our scooter portfolio with clear objective of attaining leadership in this segment as well. From latest technology, highly innovative features, more powerful engines and global styling, these products are designed to exceed the expectations of our customers in India and across the globe.”

While Suzuki and Yamaha launched the 112.8cc Lets and 113cc Alpha scooter models respectively, TVS unveiled its Zest scooty, surprisingly powered by a 110cc engine, hinting that even scooties can be upgraded from 90cc engines. However, Mahindra’s near-ready 110cc scooter couldn’t make it to the Expo.

Showcasing its line-up for 2014, Piaggio displayed its Vespa S along with the popular Vespa 946 and Vespa Liberty. All three models are likely to use the existing air-cooled, single-cylinder, three-valve, 125cc engine, which is currently made at the company’s Baramati plant.

Talking to Autocar Professional, Ravi Chopra, MD, PiaggioVehicles, said that “we will continue to pursue the premium scooter segment as there is a lot of potential for our Vespa portfolio.”

Lastly, Hero’s Leap hybrid, a concept at Auto Expo 2012, is now a production-ready scooter. The scooter runs on 8kw electric motor powered by lithium ion battery and a 124cc petrol engine (connected with the motor via generator to draw charge when battery is out of charge). While Hero MotoCorp first plans to export the hybrid scooter for spearheading into new markets (such as Europe) later this year, there is no clear timeline for the India launch yet.