CarTradeTech is working on a comprehensive digitised marketplace for vehicles, underpinned by top-class technology and facilitated by dedicated teams. 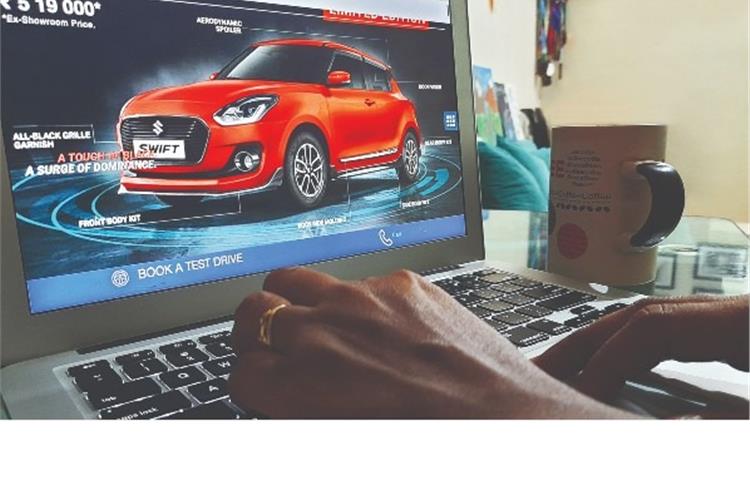 Banwari Lal Sharma, CEO : "Our digitisation vision is to make the process of buying a vehicle quick, hassle-free and transparent. This is what every customer deserves and we are committed to providing it in the best possible way."

The company is working on a comprehensive digitised marketplace for vehicles, underpinned by top-class software and facilitated by dedicated teams.

Buying a car under a decade ago on an online platform was, perhaps, not something buyers were familiar or comfortable with. The car-buying experience was rooted in brick-and-mortar. Then the pandemic changed it all.

As the CEO of CarTrade Tech’s consumer business, Banwari Lal Sharma puts it: We realised that as a digital company with 600 people are working at home, dealerships shut and so on, dozens of calls came from OEMs and dealers who shared their concerns with us.

Lal is, however, candid to say that at the start of the pandemic which hit India’s shores two years ago this month, traffic on the portal initially fell. Then in May and June 2020, “we saw things picking up”. At this juncture, there was a demand for personal mobility from a safety perspective, and as Sharma puts it, “We saw more inquiries for used rather than new cars”.

Acquired by CarTrade Tech, a multi-channel automotive platform that went public last year, the CarWale platform has a presence across vehicle types and services; on the platform are other portals such as BikeWale, CarTrade Exchange, Adroit Auto, and AutoBiz. The platform also facilitates the buying of used CVs and equipment thanks to the acquisition last year of a 51 percent stake in Shriram AutoMall, an auction platform.

CarWale is now embarking on a key part of its transformation to a digitised platform. As Sharma says, “In the first phase, we were in the information dissemination sphere in which we helped buyers basically to compare prices and discounts, and offers from your home.”

As Sharma says, the second part of this journey aims to help people to buy cars online by enabling a “one-click purchase” of an automotive product. The digitisation plan is dynamic. As Sharma describes it, “We were textual in essence then and now are in the video format. However, we are working to introduce Augmented Reality into our platform so you could, for example, see how a car is parked into a garage.”

So, the teams at CarWale are working on a plan. He says, “We are enhancing our pictures of cars to at least 60-70 per vehicle as we now have a studio to do this in the most professional manner.” Sharma admits though that this isn’t a cakewalk and the company is looking at how to handle augmented reality for close to 200 products, figuring along the way, device suitability and bandwidth.

When Sharma speaks of the overarching vision for CarWale’s digitisation vision, he asks why people would buy a lot of products online and not auto but says the reasons go beyond the fact that cars are expensive; the potential buyer also wants a more user-friendly process. Car buying as Sharma puts it has to factor in insurance, finance, and time-consuming paperwork. “Our digitisation vision is to make the process quick, hassle-free and transparent,” he puts it succinctly.

In fact, in his view, the digitization process saves time, and that is why “the customer comes to CarWale”. Simple queries are now a click away and that convenience is what the customer wants, he reiterates. The CarTrade Tech platform, he says gives the customer what he deserves accurately and fast. There are no “intrusive discussions”. Sharma is also categorical that the platform works collaboratively. He is under no illusion that the dealer link cannot be brushed aside.

In terms of the profile of the customers who come to site, Sharma says he gets a fair representation across new and used cars, and bikes, the last being a much newer segment. In terms of the breakup, tier 1 cities (Top 8 cities) contribute approximately 35 to 40 percent of our traffic and the four metros contribute approx. 18-20 percent of our traffic.

Dedicated Teams
While Sharma says his company is asset-light, not having an inventory of cars and bikes, the company has data and proprietary tools and its dedicated teams are going all out for the customer. As an example, he cites CarWale and BikeWale which have core teams in product development, design, coding and content, and would each cost between Rs 1.25 crore and Rs 1.5 crore annually. These teams have been set aside exclusively for the digital transformation and are at the front of CarTrade Tech’s digitisation push. A total of ten teams are planned.

With regard data security, Sharma prides himself on the fact that “we are an organisation that has high levels of trust with customers”. He cites compliance audits that have been conducted to ensure that data is safe. There is also the fact that working collaboratively means data is shared or transmitted. But the company is extra careful to ensure that data shared is in encrypted links.

One of the many impacts of the pandemic, he says was the huge surge in the usage of a CRM tool for customers. The tool called autobiz was leveraged and in his view, the customers were satisfied. The company was able to work collaboratively with an OEM bang in the middle of the pandemic.

At the end of the day, the success of the digitisation transformation will be determined by the customers, and from that point of view, Sharma is pleased with the traffic that the platform currently received. The users’ profile is between 25 to 45 years old accounting for 70 percent of the traffic.

It is a given that competition in the digital space will only intensify, and Sharma cites several home-grown competitors as well as global ones including Google and Facebook. In the used-car space, OLX and Cars24 are among their competitors. CarTrade has its own called Carwale Absure which among, its USPs is a seven-day money-back guarantee

Future-ready
Summing up the vision of the CarTrade Tech platform, he says that the aim is to be present at all touchpoints which includes customers, dealers, OEMs and allied services including finance and insurance. Even if the platform cannot replicate all that a physical world can show, he banks on AR to be able to give the customer the opportunity to make the best decision. From a dealership perspective, “we can be partners in their digitisation journey or to make them future-ready and take their staff to another level”. Across the value chain, Sharma says the digital experience can be enabling.

CarTrade is aware that the digital business is hugely competitive and so the company has allocated a war chest of $ 100 million for acquisitions and synergies because “digital transformation is the future”.

Sharma is clear that CarTrade has been able to simplify the process of buying and that “our vision is centred around the customer”, but there is a lot to be done for buyers, OEMs and dealers. That is what the company aims at and needs to do in order to stay “ relevant and ahead of the curve”. At the end of the day, Sharma says, “We want to give the consumer the best possible choice.”