With BS VI emission norms coming in by 2020, the 2W industry will see mass replacement of conventional carburettor units by advanced electronic fuel injection systems across models that could start from 4-stroke, 97cc engines. 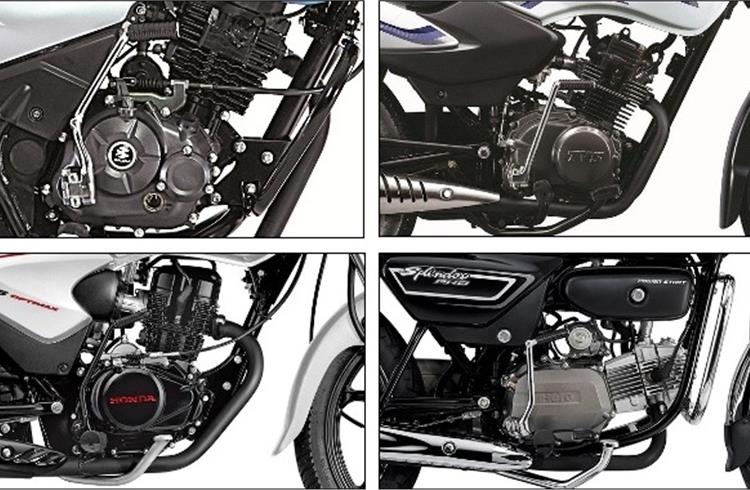 With the Ministry of Road Transport and Highways (MoRTH) issuing a draft notification earlier this year about its decision to leapfrog from BS IV emission norms to BS VI emission standards by 2020, industry experts immediately pointed out to a substantial rise in market prices across the automobile industry.

Industry, however, continues to debate the potential magnitude of the price increase for both – the passenger car and the two-wheeler segments differently due to the deployment of advanced technologies on the vehicles.

According to Subrata Ray, senior group vice- president, ICRA, “The cost impact of EFI systems on two-wheelers with existing levels of localisation is expected to be significant, in the region of 10 percent to 20 percent, for now. The costs, however, are expected to come down subsequently as parts in the EFI system get localised.”

ICRA, a Gurgaon-based independent credit rating agency, had recently released a report highlighting the cost impact of electronic fuel injection (EFI) systems, which are not currently manufactured in India in the required scale.

SIAM data points out that the Indian two-wheeler industry produced close to 18.83 million units in FY2015-16. Of this, the domestic market for the last fiscal stood at 16.45 million units. A detailed analysis of the many two-wheeler categories by Autocar Professional observes that of the total domestic two-wheeler market last fiscal, around 15.51 million units or more were running on carburettor-fed engines.

This vast market size for carburettors (excluding the demand in the aftermarket) involves the locally manufactured scooter segment ranging from 88cc to 150cc, and motorcycles ranging from 97cc upto 500cc engines. While Hero MotoCorp’s popular Splendor range could be understood as the smallest commuter engines, Royal Enfield’s 500cc Bullet 500 could be the largest-displacement locally-made model that runs on the same mechanism.

Abdul Majeed, partner, automotive, Price Waterhouse (PwC India), estimates that the two-wheeler industry could produce anywhere between 20-22 million units by 2020, of which around 17.5-18 million units or more could be contributed by the commuter segment using up to 150cc engines.

It is understood that around this volume will be directly impacted by the potential price rise owing to the replacement of carburettors by more advanced fuel injection systems.

Economies of scale will lower costs

While ICRA predicts an increase in the range of 10 to 20 percent over the existing retail prices directly impacting the cost-sensitive buyers of the commuter segment, it also underlines that economies of large-scale production of the fuel injection units in India could subsequently moderate the impact. 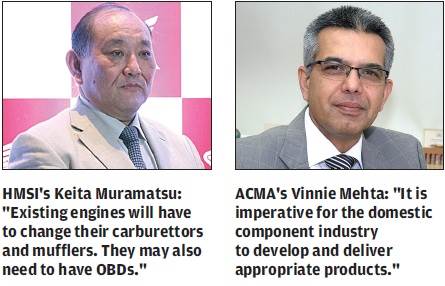 Experts say that adhering to the BS VI emission standards would mandate the usage of electronic fuel injection systems, which directly impacts the nature of combustion in four-stroke engines. The domestic two-wheeler market, which witnessed the implementation of BS IV emission norms for all new models from April this year, will see all existing models adhering to the same from April 2017.

All OEMs are understood to be currently busy upgrading their vast portfolios of existing models to meet BS IV standards within the given deadline.

Speaking to Autocar Professional in this context recently, Keita Muramatsu, president and CEO, Honda Motorcycle & Scooter India (HMSI), said: “We have already upgraded (new models) to BS IV standards. As we know, readying for BS VI emission norms by 2020 will be challenging. There may be a price increase in the products. It is likely that all the two-wheelers will have to have fuel injection instead of carburettors. Almost all motorcycles and scooters in India are using carburettors. Nearly 20 million carburettor units (forecast for 2020) will make way for fuel-injection technology. We already have fuel-injection technology in our models in countries like Indonesia, Thailand and others. However, for India, it is not so long a time to change all models from carburettor-fed engines to fuel-injection based engines.” 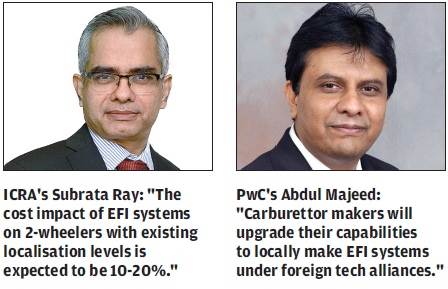 “We have four factories now, and to bring that change we will go step-by-step. The Activa is manufactured at all factories. It requires a one-time change to fuel-injection. Suppliers also have to consider increasing the production capacity of fuel-injection units. The existing engines will have to change carburettors, mufflers; they may also need to have OBDs (on-board diagnostics) to indicate emissions. For cars, it is easy to find a place for OBD units but it is difficult to find adequate space to accommodate an OBD unit on a small motorcycle,” he added.

The challenge for suppliers

The ICRA report further states that although the existing models that are available in carburettor as well as in EFI variants currently have a cost differential in the range of Rs 6,000-Rs 9,000, the same is estimated to decrease with the increasing localisation of EFI units in India. According to Ray of ICRA, the ability of ancillaries to localise the entire EFI system by 2020 remains challenging. 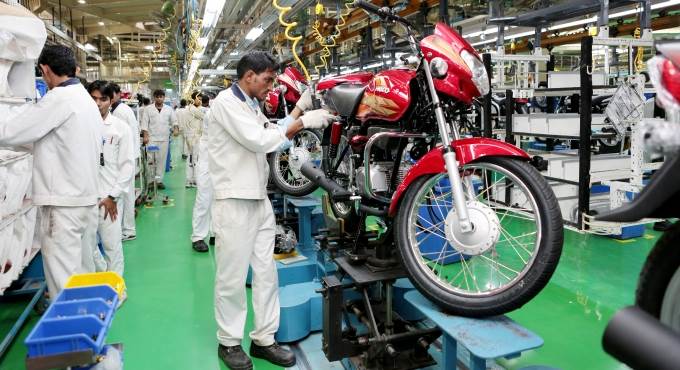 Giving his outlook on the same, PwC's Majeed said: “Currently, fuel injection technology is not available in India to a good extent. This is so because foreign suppliers were expecting BS VI to kick in not before 2023-24. However, after the notification from the government, the companies are trying to evaluate what best they can do to address the upgrading market. They are going back to the drawing board to figure out the right things. Mostly the issue lies with the Indian manufacturers (suppliers). Those who are manufacturing carburettor units currently will logically upgrade their manufacturing capabilities to be able to locally make the EFI systems, possibly under technical alliances from their foreign counterparts.”

Voicing the outlook of the component industry, Vinnie Mehta, director general of ACMA, says: “Considering that the government is soon to announce the roadmap for BS VI adoption for the vehicle industry, it is an imperative for the domestic component industry to develop and deliver appropriate products or else they face the risk of being outsmarted by internationally available solutions.”

What is EFI technology?

In its simplest form, an EFI system is a computer- controlled fuel delivery system. It determines, with the help of some software, the amount of fuel that should be mixed with air and supplied to the engine.

How is it different from carburettor technology?

The functionality of the EFI system and carburettor is the same — air-fuel mixture management. The carburettor is a mechanical device, which mixes air and fuel in a pre-determined ratio. This ratio can be changed manually by means of a screw. On the other hand, in an EFI system, the ratio of air to fuel that is to be mixed is determined according to the environmental and riding conditions, with the help of an Electronic Control Unit (ECU) located in the system. This allows for more precise and dynamic air-fuel mixture management.

What are the components of an EFI system?

There are multiple sensors (RPM, engine temperature, air temperature, throttle position, manifold pressure, crankshaft position), which relay information to the ECU about operating conditions and load on the engine. The fuel pump in the system directly injects fuel into the combustion chamber using nozzles; it is pressurised to enable atomization of the fuel, which in turn enables accurate amounts of the fuel to be injected. The fuel map is the inbuilt mapping in the system that enables the ECU to determine the air-fuel mixture for each combination of inputs.

The brain of the system is the ECU — it reads the information relayed by the various sensors located on the vehicle, and the fuel map programmed in the computer and determines the quantity of fuel that is to be injected into the combustion chamber. The throttle body, which replaces the carburettor, is the only mechanical part in the system.