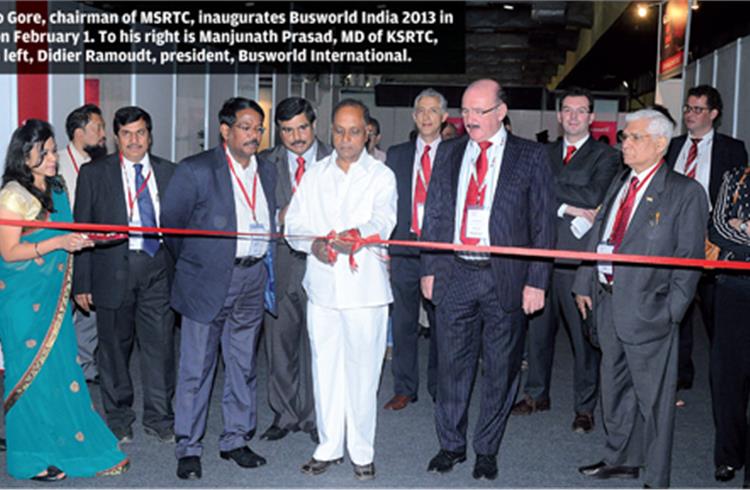 Ramoudt highlighted the focus of this year’s show when he said, “Our objective is to focus on the sustainable public transport system, increased fuel efficiency, ITS (Intelligent Transport System) and hybridisation.” Emphasising the Busworld Academy, he spoke about bringing in experts, engineers, leaders and politicians to discuss innovations in the domains of public transport concepts, safety and improvement areas.

Meanwhile, talking about climate change, air quality and fuel prices, Krister Thulin, marketing director, Scania Commercial Vehicles India, stressed on the usage of biofuels (biogas, bioethanol, biodiesel) as apt solutions for sustainable public transport systems. Giving the example of the city transport system of Stockholm where all buses run on biofuels, he explained that the sustainable public transport system is a combination of advanced buses which run on biofuels. “We are ready with biofuel-powered engines and can make them available in India,” he added.

Gore of MSRTC told Autocar Professional that the state-owned Road Transport Corporation will focus in the areas of research, building bus bodies and overall workshop operations. “On an average, we add around 2,000-2,500 buses to our fleet each year which are more or less assembled in our workshops. We purchase the 35-seater minibuses where Tata Motors is the major supplier,” he said.

Throwing some light on the grievances of the bus industry, Bhanot explained that “under JnNURM, the government funded low-floor modern buses which require daily maintenance and checks. With the current facilities at our bus depots, the inside rear tyres of these low-floor buses cannot be regularly checked. While the actual requirement of air pressure in the tyres is around 90 bar, the drivers carelessly drive at 60 bar pressure without checking the same before starting the day. Driving overloaded buses (by up to 40 percent during peak traffic hours) with low air pressure (in the tyres) results into high temperatures in the beed wires housed inside the tyres. This is the main reason for the incidents of these buses catching fire.”

With modern buses coming onto Indian roads, greater stress on fleet planning and operations, separate departments to manage fleets under each state transport undertaking (STUs) and implementation of ITS were some of the prominent suggestions he made. Marathe recommended newer technology in local bus production ranging from using lightweight materials, multi-material joining (monocoque structures), improved powertrain design, aerodynamic exteriors, usage of alternate fuels and ITS as much-required steps for the industry.

On the sidelines of Day 1, Scania launched its first buses and coaches for the Indian market. Named Scania Metrolink, the luxury inter-city buses comprise two- and three-axle 45-, 49- and 53-seaters. The 45-seater (12m, 4x2), the 49 semi-sleeper coach (13.7m, 6x2) and the 53-seater semi-sleeper coach (14.5m, 6x2) are powered by 9-litre (310hp, Euro 3), 13-litre (360hp, Euro 3) and the 13-litre (410hp, Euro 3) Scania engines respectively. The 49- and 53-sleeper coaches come with three axles. Positioned as premium products, the company plans to assemble the complete coaches at its upcoming Bangalore plant by Q1 of 2014. Meanwhile, truck operations at the plant are expected to commence later this year. Scania plans to start deliveries of the MetroLink buses to its customers by mid-2013.

Speaking with Autocar Professional, Krister Thulin pressed on the company’s capabilities of supplying powertrains capable of running on biogas. He also said that Scania is seeking cooperation with the government bodies to promote the production and usage of biogas for the public transport system. He also expects that the company will sell between 1,000-5,000 luxury bus coaches in India in the coming five years.

Displaying India’s first indigenously developed 12-metre monocoque passenger bus, Skypak XL, Corona Bus plans to kickstart its production by April-June 2013. The bus uses a rear-mounted 245hp Cummins engine, gearbox by Allison Transmission, Meritor axles, ZF steering systems and boasts of a wide and stepless gangway, a first for any modern passenger bus. Rohit Krishna Parigi, vice-president, Corona Bus, informed that “with a GVW of 15.4 tonnes, this bus is lighter than any other passenger bus of this class by at least one tonne. It has the lowest centre of gravity which offers maximum stability. "A monocoque spaceframe-designed bus enabled with a front independent air suspension offers world-class safety and comfort. Easy availability of spare parts and lower maintenance costs improve productivity and profitability. It offers a projected life cycle of 10 lakh kilometres and requires less manpower to service. We have been developing the monocoque platform for the last 10 years and have spent over Rs 40 crore in our R&D.” The company is also expanding its Pune facility by 50,000 square feet to gear up for the production of the Skypak XL.

Though the cost of the 30-berth sleeper coach remained undisclosed, a company official said that the 49-seater luxury coach would cost between Rs 8-18 lakh, depending upon the features. The listed company in which 47 percent and 3 percent shares are held by Tata Motors and the Goa government respectively, exports nearly 85 percent of all vehicles made locally.

A new entrant in the CV domain, the one-year-old Deccan Auto plans to commence operations by April 2013 at its upcoming facility near Hyderabad. The company plans to import bus coaches and components from China, initially based on Indian market requirements, and assemble the vehicles at its facility. However, it plans to start localising the same once it gains a foothold in the market.

M Balaji Rao, principal advisor, Deccan Auto and director, Synergy Management Systems, said that “we will be importing the luxury coaches from Zhong Tong (a Chinese bus manufacturer which produces 12,000 units per annum and supplies to the Chinese government) and standard coaches and components from Weichai (Chinese CV manufacturer which makes engines, axles and gearboxes). Once we start our assembly operations, we will focus only on Andhra Pradesh and Karnataka for the first year.” The company is investing Rs 250 crore to set up its operations.

Dominant player in the auto air-conditioning business, Subros is in expansion mode. The company plans to raise its current production capacity of 1.5 million units per year to around 2 million units per year by 2015. Besides being a 70 percent supplier of AC units to Maruti Suzuki and a sole supplier to Force Travellers and Mahindra Reva electric cars, Subros also manufactures and supplies AC units for commercial vehicles ranging from 10-seater (which use a 4 kW AC unit) to 45-seater vehicles (which use a 36 kW AC unit). The company also supplies to the double-axle Volvo luxury buses and the 12-metre buses from Tata Motors and Ashok Leyland.

Rajeev Naithani, assistant general manager, marketing & service, Subros, said: “We are the only auto AC unit manufacturing company with maximum localisation which makes compressors, heat exchangers and other crucial components in India. Being service oriented, we have a pan-India network of 70 service centres. Our priorities for 2013 would be to continue our domination in the car AC market and to set up a foothold in the CV AC segment.”

Carmaker Suzuki and automotive component manufacturer Denso both hold a 13 percent stake each in Subros. The company, which is already a 100 percent supplier to the Tata Xenon pickup, works closely with Tata Motors for the vehicles in the Thailand market.

Chemito Technologies, a player in the field of passenger information system (PIS), is optimistic about the second phase of JnNURM announcements. The company assembles the LED electronic boards at its assembly plant in Nashik.

Ashley Castelino, manager, bus applications, Chemito Technologies, said that “our operations are totally indigenous and we offer the most viable PIS solutions in the market. For 2012 and 2013, we are the only company in this domain which complies with the ASRTU rate contract, a cost parameter (defined by the Association of State Road Transport Undertakings) to be adhered to by all the component manufacturers seeking to supply components to any STU for the JNNURM fleet of buses.”

With hardly three years of its presence in the CV segment, the company is beginning to gain a foothold. It has equipped nearly 1,500 JnNURM buses with its LED electronic boards (one set includes a front, a rear, a side board along with inside panels and a master controller).

“With JnNURM II coming in, we expect nearly 50,000 (AC/non-AC) buses to be funded by the state governments during 2013-15. All these will be equipped with the PIS and we see a great opportunity ahead of us. Having made substantial investments so far, we expect to breakeven in 2013. With a current market share of less than 10 percent in this space, we target to grow upto 25 percent in next three years,” added Castelino.

Wheels India, a TVS Group company, is close to sealing a deal with Volkswagen to supply wheel rims to the German carmaker by the beginning of 2014 or earlier. The company had displayed its forged aluminium wheels (FAWs) for CVs which, according to company officials, offer 2.5-5 percent fuel savings, 30-40 percent cost savings and more life over the regular steel wheels.

“While a regular steel wheel comes for Rs 3,000, the FAWs cost Rs 14,000 (for CV applications). The steel wheels offer a lifecycle of 20,000km against a FAW which offers 100,000km,” disclosed a company official. Wheels India is a supplier to Tata Motors, Ashok Leyland, Mahindra & Mahindra, John Deere, Force Motors, TAFE, Volvo and Mercedes buses in India.

Spheros Motherson Thermal System is all set to tap prominent CV players such as Daimler, Scania, MAN and others in India. Man Kamal, GM, sales and marketing, said that “we will be focussing on the new modern inter-city coaches rolled out by manufacturers such as Daimler, Scania, MAN and others. Our priorities for the approaching fiscal also include strengthening our city bus portfolio. We are 100 percent suppliers to Tata Marcopolo and will tap the upcoming buses from players like Corona. We also look at strengthening our exports by working closely with Tata Motors and Ashok Leyland.” The company launched City Vent, a maintenance-free ventilation solution for non-AC Indian buses. According to Kamal, City Vent is a tested and proven solution in Brazil as most of the city buses are equipped with the same. Spheros, which is an 80 percent supplier to all Volvo buses globally (except India and Mexico) has a JV with the Motherson Group. It is the producer of air-conditioning systems, heating and ventilation systems for buses and coaches. Kamal believes that the upcoming JnNURM requirements would be more inclined towards the non-AC buses.

R S Prakash, deputy GM, sales, Eberspächer, disclosed that “our AC units are designed at company’s design centre in Germany. We plan to increase the local content against the current localisation rate of around 20 percent and we also expect the school and hospital segments to pick up in the coming times.” All in all, Busworld India was a cracker of a show, depicting an optimistic view of the future, despite the ongoing slowdown.