From automatic-like driving experience in cars to connected bikes, Bosch wants to grow its business by riding the tech curve, says Sumantra B Barooah. 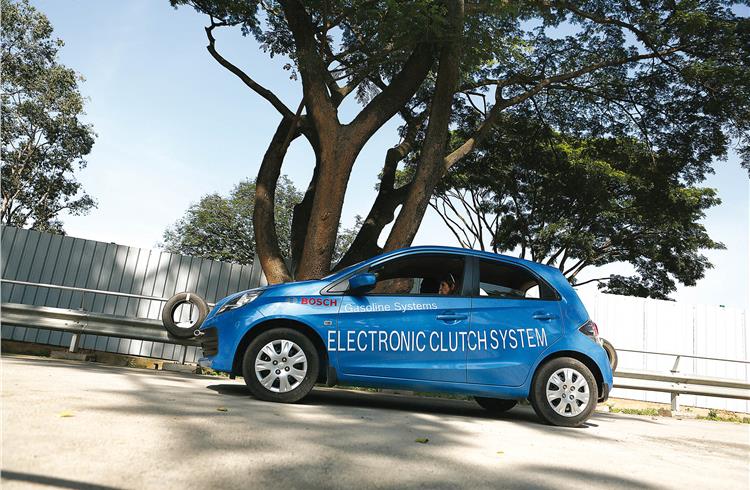 The healthy consumer response to the automated manual transmission variant of the Maruti Celerio shows that India could be ready for clutch-free driving. While the market may not be ready for the more expensive pure automatics, traffic congestion in cities, with its stop-and-start driving is paving the way for automatic transmission vehicles in India. Such technologies that give users an automatic-like driving experience are set to gain ground in India. 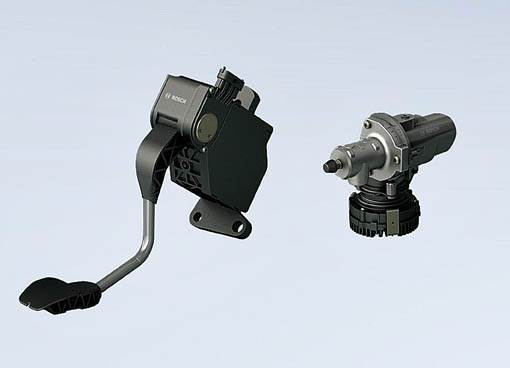 Among the technologies that could hold sway is Bosch’s eClutch (pictured above). Unlike a fully automatic transmission, the eClutch automates the clutch only, not the transmission. The cable-less clutch pedal transmits an electric signal to an actuator, which decouples the clutch. In congested traffic conditions, the eClutch allows the driver in a manual transmission car to use first gear without using the clutch.

I had a feel of this when I took to the wheel of a Honda Brio equipped with an eClutch at a Bosch Tech day event, held in Bangalore on October 30. I could shift gears without pressing the clutch. A special sensor detects the start of a gear shift and adjusts engine speed, which facilitates a smooth gear change. What is significant is that the Brio as a test car reflects Bosch’s focus in offer the technology in the compact car segment first. In terms of cost, Bosch says the eClutch is ‘significantly less’ than a conventional auto transmission. This makes it a strong proposition in a segment with price-conscious buyer.

Apart from the cost factor, the eClutch promises savings in fuel and lower emissions. Bosch claims that in start-stop coasting mode, the fuel consumption can come down by 10 percent. In India, though Bosch will initially offer idle coasting. “Our idea was to get it into the market with driving comfort and idle coasting because idle coasting offers good value. But the biggest advantage is that as we move forward, as technology adapts you can move in the X axis. You can bring in start-stop coasting, recuperation,” says Sandeep N, regional president India, Gasoline Systems, Bosch India. “Europe is doing it (eClutch) with a big-bang approach. For them, carbon dioxide reduction is the main factor. We will create the subsystem where we pick what is necessary, enter and then slowly make our  way up the value chain,” adds Sandeep. The eClutch may well be introduced here in 2016. 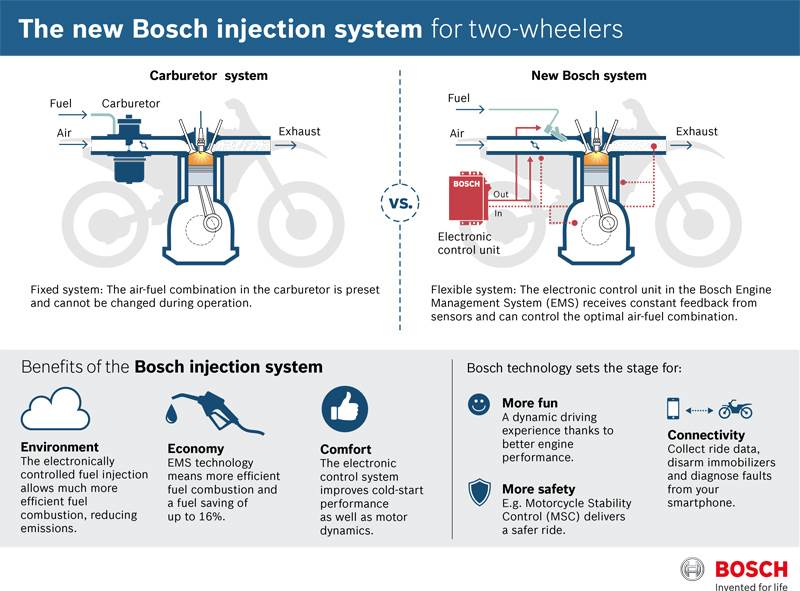 When it is India, the huge market for compacts and two-wheelers offer a tantalising business opportunity. While Bosch has made inroads in four-wheelers, it is training its sights on two-wheelers. By 2020, Bosch estimates that four out of five two-wheelers with internal combustion engines (ICE) will be sold in Asia. In India, sales of two-wheelers with modern engine management technology are expected to be 15 to 20 million by 2020.

“We predict that the number of two-wheelers sold annually on the subcontinent will reach 27 million by 2020,” says Dr Volkmar Denner, chairman of the Bosch board of management. Worldwide, the number of motorbikes and electric e-scooters sold is expected to go from 100 million today to 150 million by the end of the decade. By comparison, Bosch forecasts that some 110 million new cars will be sold worldwide in 2020.

Against this backdrop, Bosch is also entering the global motorcycle market with new powertrain systems. Especially in Asia and India, efficient powertrains can play an important part in reducing environmental impact. For this reason, Bosch has developed an affordable EMS specially designed for India and Asian markets. Currently, the Indian two-wheeler industry is dominated by carburetor-fitted engines. When the shift happens, Bosch is poised to be a big beneficiary. Its exposure to the Indian two-wheeler industry is quite small now. It supplies electronic  engine management system (EMS) and ABS to the KTM Duke bikes available here.

In addition to offering components such as EMS and ABS, Bosch plans some inorganic moves is growing its two-wheeler business through new age technologies. One motorbike that caught this correspondent’s eye at the Bosch facility is a ‘connected bike’. On the outside, it looks like any bike. However, it is the software inside that makes it interesting. Bosch engineers have developed a software development kit platform which offers developers to come up with a variety of mobile applications. The connection with the bike is established through Bluetooth.

So, a trial application called Bikebuddy can provide real-time information on fuel efficiency as well as record fuel consumption and speed at pre-set intervals. Another application called Bikey offers features such as immobilising the bike, automatic lock when ignition is off or unlock ignition and fuel injection through a unique PIN code. Another application called Bike DTC is designed for diagnosing the health of the bike under set parameters. “It is not a fantasy. Everything what you can think about. You can get it on your mobile. On emergency mode, suppose there may be a breakdown after 10 kilometres, your mobile will let you know where you will get support and everything,” says Friedrich Boecking, regional president , Bosch India.

The above project is being conducted on a KTM Duke, a premium bike. Bosch is also developing some technologies for the mass bike market. One product is the stop-start feature. Along with it, Bosch’s low cost EMS and a low-cost ABS for two-wheelers in India and India-like markets will play key roles in realising the German supplier’s plans of being a major player in the two-wheeler industry too.