The company caters to 45,000 people each day with over 800 buses plying on 150 routes in NCR, Kolkata, Pune, Hyderabad and Mumbai. 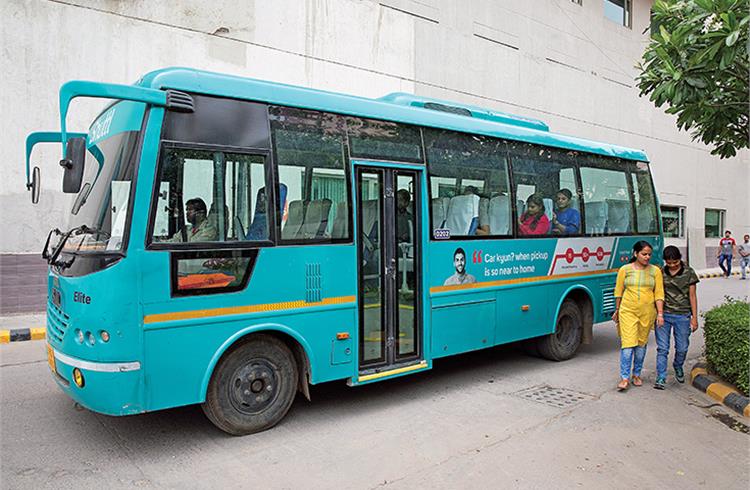 Shuttl, a three-year-old Gurgaon-based start-up caters to 45,000 people each day with over 800 buses plying on 150 routes in the National Capital Region, Kolkata, Pune, Hyderabad and Mumbai. The company aims to leverage technology to acquire, aggregate and analyse people’s travel pattern data to scale up and solve everyday commutes.

India has seen a rise of disruptive start-ups in the mobility sector, most of them aiming to improve last-mile connectivity and each achieving different levels of success. For the three-year-old Gurgaon-based start-up Shuttl, the story is no different. Founded by Amit Singh and Deepanshu Malviya, Shuttl was born to take the “pain away from everyone’s commute and reduce congestion on our roads at the same time.”

App-based office bus commuter
The company, which started operations in April 2015, provides consumers with a seat-based smart bus option. It says that the service gives people the ‘dignity of commuting, saves road space all the while being carbon-efficient’. 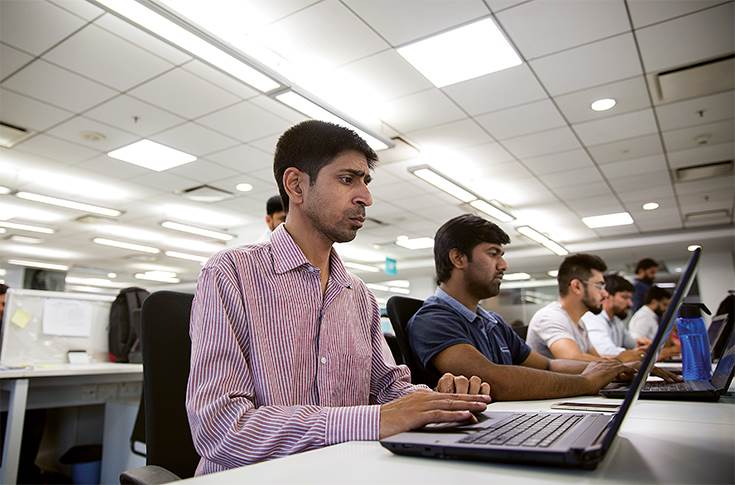 Shuttl, which began operations in 2015 with a five-member team, has grown to 315 employees.

According to Shuttl, users can book a ride on the company’s fleet of AC buses with an assured seat using the app, all the while at an economical cost compared to what he/she would have spent on hiring a cab or other mode of transportation. Amit Singh, co-founder and CEO, Shuttl, says: “As Shuttl is a bus-based model, Shuttlrs (users) don’t add to road congestion. The buses occupy less road space and move the maximum number of people.  Cars do the opposite!”

At present, it provides services in eight cities including Delhi-NCR and pilots in Pune, Kolkata, Hyderabad and Mumbai. Shuttl is currently averaging daily transport of around 45,000 people with more than 800 buses plying on around 150 routes. 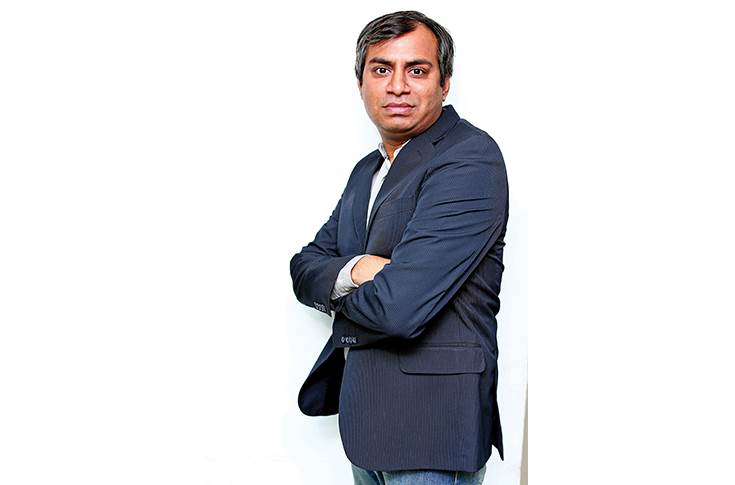 Founder Deepanshu Malviya is optimistic that demand will grow for the bus service.

Till date, Shuttl has raised around $34 million (Rs 215 crore) from various investors such as Sequoia Capital, Lightspeed India Partners, and Times Internet. In its most recent round of funding, it raised around $11 million (Rs 70 crore) from global online e-retailer major Amazon and Japanese advertising and public relations major Dentsu.

Speaking on the growth path forward, Singh says, “We propose to expand geographically and extend our footprint not only to metros and Tier 1 but to Tier 2 and Tier 3 cities in India, but also globally (particularly Africa and South Asia).”

Challenges and solutions
The path to becoming a popular choice for transport is not easy for any private entity, and when it relates to a developing economy like India, the challenges become manifold. “Initially, communicating the exact pick-up and drop location to users was a challenge,” says Singh.

The initial challenge was then solved by using the power of partnership. “We solved this problem through our location-based app and partnered with Google Maps to enable users to find a ride on its platform whenever a commuter searches for public transport between two locations by simply entering the pick-up and drop locations and the app will either guide or suggest the nearest route available,” explains Singh. 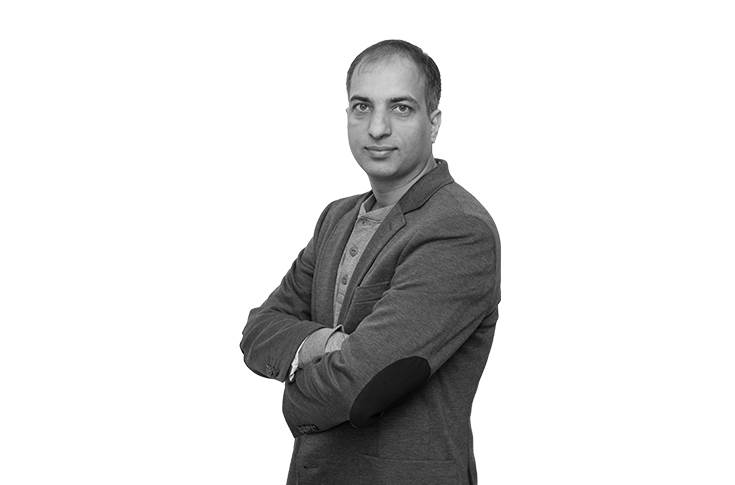 The company says it believes that technology has the ability to acquire, aggregate and analyse people’s travel pattern data at scale. The insights from this big data can enable better decision making and better asset utilisation of transport assets. Shuttl currently has an employee strength of around 315 people.

Shuttl claims to have around 890,000 users on board with an average of 55,000 users for the last three months. The average ticket size for a user is said to be around $1.5 (Rs 95) for a 32km ride, which is substantially lower than what a consumer would spend on the same route using a similar level of road transport.

For its operations, Shuttl’s fleet comprises buses ranging from 22- to 52-seaters, with the average bus size being a 36-seater. Singh says, “For better fuel, space and cost efficiencies, we intend to use bigger buses only, unless there are constraints. In the fleet of more than 800 buses, 92 percent are CNG-powered (BS IV, 4 km/kg) and 8 percent are diesel-powered (BS III and BS IV, 5 Km/Litre). We procure buses from OEMs like Force Motors, Tata Motors, SML Isuzu and Ashok Leyland.

Future growth
Shuttl is optimistic that breakeven will arrive in the next one year. Explaining the confidence, Singh says, “We will continue to focus on operational efficiency and the service reliability at Shuttl. The goal is to make Shuttl a preferred way of travelling to work for more and more people across in India.  We are also looking to work closely with city and state governments in the Public-Private Partnership (PPP) model to build smart and intelligent transport systems, which have the potential to revolutionise the urban mobility sector across India.”

Speaking on leveraging expertise from investors, Singh says, “As you know, these are very well-known global investors. Over and above their investment in Shuttl, which we deeply value, they bring deep know-how and vast international experience. The funds, combined with the knowledge from investors like Dentsu and Amazon India, in turn, means that an Indian start-up like ours can get thinking global and can draw on that expertise and knowledge along the way.” 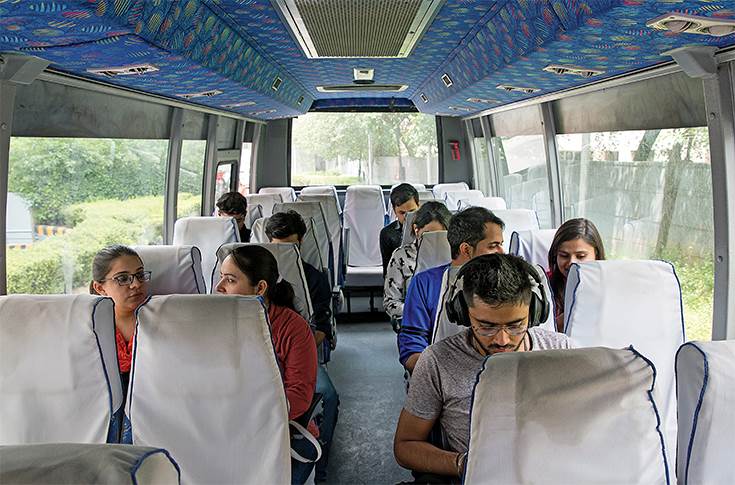 The company says it intends to induct electric vehicles in its fleet, and will look at working with OEMs to redesign vehicles that suit Indian conditions.

The disruptive technologies from CASE (connected, automated, shared and electric) mobility, is something that every stakeholder is keeping a close eye on. As a mobility solution provider, the 800-strong bus fleet company is looking forward to embracing the disruptive electric vehicle revolution. “Shuttl’s mission is to end congestion,  the related pollution it causes and restores the dignity of commuting. EVs fit in with this mission and are a step in that direction. We intend to adopt electric vehicles, work with OEMs to redesign vehicles that suit Indian condition and explore
inter-city travel and tourism. We are looking forward to deploying e-buses in our operations,” adds Singh.

He says that the company believes in a tech-driven, intelligent urban mobility system that will be the right approach to build a people-centric and environmentally-friend transport sector in India. “We will partner with all relevant stakeholders to make this reality across India,” concludes Singh.