With mandatory regulations driving the need for active and passive safety systems in both two- and four-wheelers in India, technology and component suppliers are gearing up to make the most of the heightened focus on safer motoring. 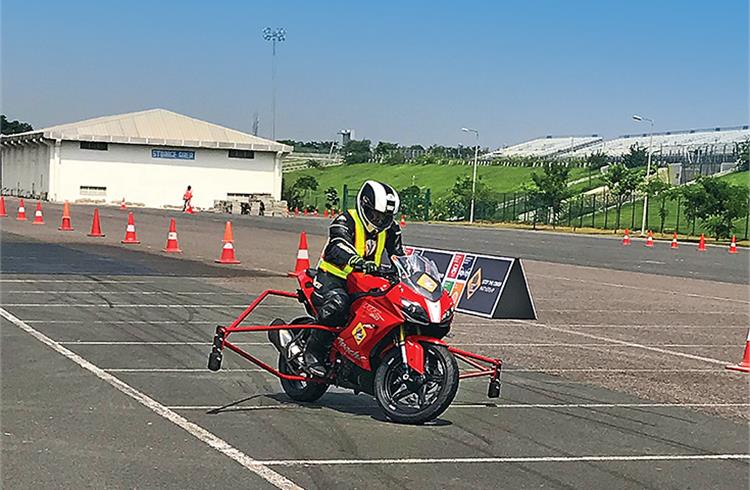 As India shifts gear and drives towards a safer and sustainable motoring future with a slew of regulatory reforms, new vehicles have finally started seeing a bevy of safety technologies designed to reduce accidents and also save lives.

Interestingly, crash test norms bringing new passenger vehicle models into their ambit from October 2017 itself had prompted a number of OEMs to start offering airbags in order to meet the frontal, frontal-offset and side-impact homologation test procedures. 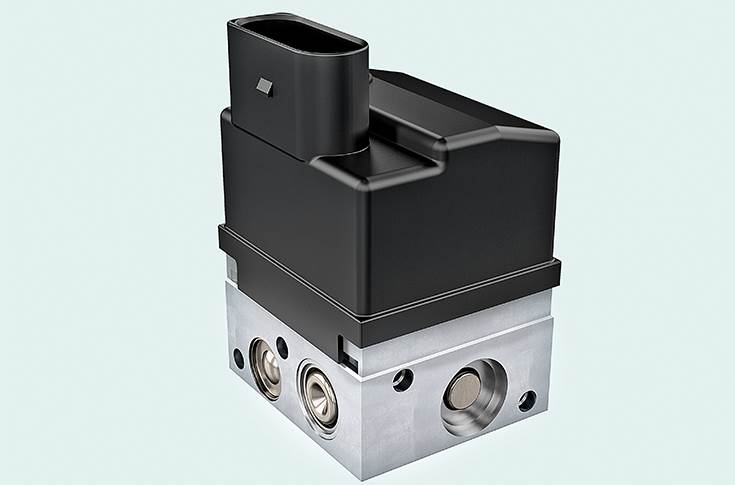 Continental's MiniMAB is the lightest product by weight in its class. The highly efficient ABS package is easily adaptable to both scooters and motorcycles because it only needs one wheel speed sensor.

India, which is already the largest motorised two-wheeler market (FY2019: 21,181,390) and accelerating to become the No. 3 passenger vehicle market by 2021 (FY2019: 3,377,436), offers huge potential for technology providers and component suppliers to get the maximum out of its growing need of such safety systems.

Betting big on localisation
German component major Continental, which has proprietary safety offerings in both ABS and airbag systems, wherein it supplies the Airbag Control Unit (ACU) and also a cost-efficient one-channel ABS solution for application in two-wheelers in emerging markets, foresaw this demand coming its way and embarked on a localisation roadmap for these components in India.

While the company was catering to India Auto Inc's needs by trading in these systems from logistically convenient Continental locations abroad, in 2016, it set up an ABS and ESC assembly line at its braking component plant in Manesar, from where it also supplies to some four-wheeler customers in the ASEAN region. 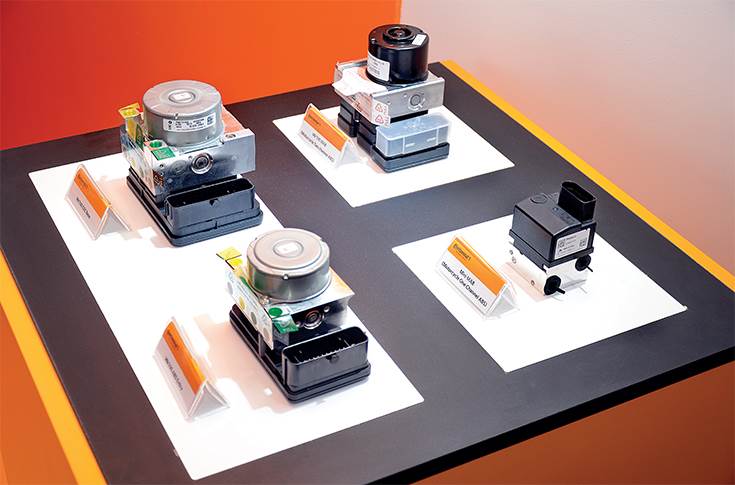 With some OEMs starting to make airbags standard, Continental also started local manufacturing of ACUs at its Bangalore facility in 2016. Two years later in January 2018, it ventured into the local production of Electronic Control Units (ECUs) for ABS and ESC systems at the same plant.

In November 2018, two new assembly lines in Manesar were set up to expand capacities ahead of the April 2019 regulatory mandate for two-wheeler ABS, and 2019 saw expansion of ACU capacities in Bangalore. We undertook a tour of Continental's Automotive Brake Systems facility, which covers a substantial 11,000 square metres in the IMT industrial area in Manesar, Haryana, to get a ringside view of how the Tier 1 major is readying to meet demand from OEMs in India, in line with its 'Vision Zero’ global safety mission. 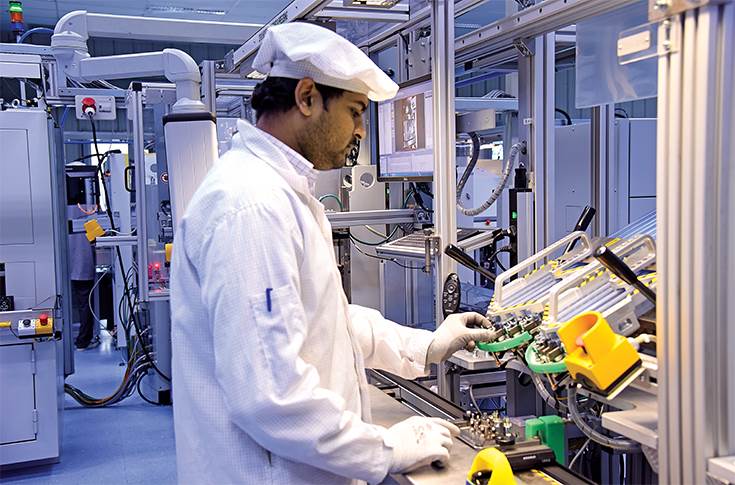 In January 2019, Continental added a new assembly line to expand its ACU capacity at its Central Electronics Plant in Bangalore.

The company has been mainly producing hydraulic brake systems (HBS) components at this plant, with parts such as brake boosters, callipers and brake drums being supplied to all key passenger vehicle OEMs.

Now, with the bulk of India's two-wheeler sales coming from motorcycles between 125cc and above in engine capacity, which accounted for a sizeable 4.9 million units in FY2019, Continental says it is absolutely ready to offer its ‘MiniMAB’ one-channel solution to meet the braking requirements for this class of vehicles. 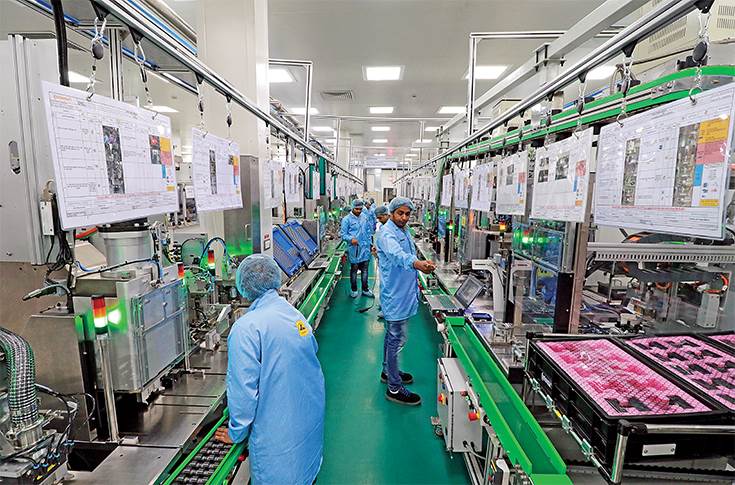 In November 2018, Continental inaugurated two new assembly lines in its Manesar plant to expand manufacturing capacity ahead of the April 1, 2019 mandate for two-wheeler ABS.

While HBS components have been localised to the extent of sourcing child parts from India, as regards ABS, the company has a definitive localisation plan in place, which it is working on to realise over the next three to five years. However, Continental says it will also be taking into account the government’s next policy push of bringing in ESC (Electronic Stability Control) norms for passenger vehicles by 2022-23. 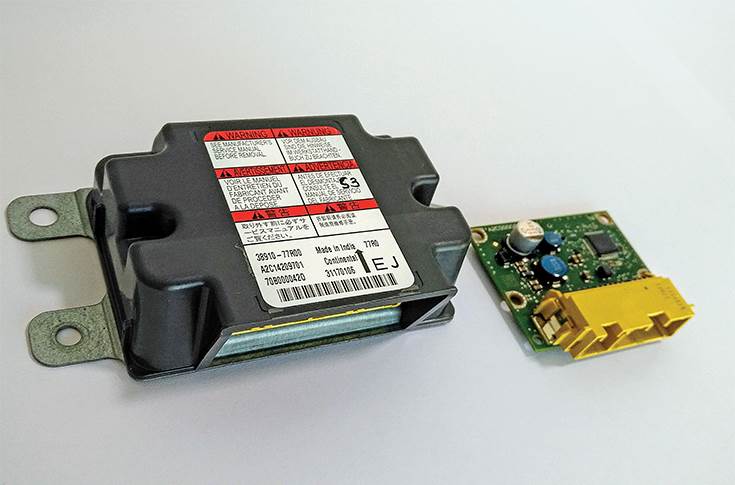 The entry-level Airbag Control Unit is the basic version of the Passive Safety Electronic System for OEMs in emerging markets.

“We will go deep into localisation like we have done in HBS; the only thing is that while we have already localised the ABS electronic controller in Bangalore, we aim to go further in a phased manner. Our target is to make India a global hub for two-wheeler safety systems considering we are the biggest market in the world,” says Krishan Kohli, business head, Vehicle Dynamics, Continental Automotive Components India.

“ESC is going to be a game-changer. If we start right now with the existing products and the regulations change within two years, we will have to start again from scratch. In order to avoid that, we have planned to factor in the potential legislations that will be coming up,” adds Thomas Laudes, business head, Hydraulic Brake Systems, Continental Automotive Brake Systems. 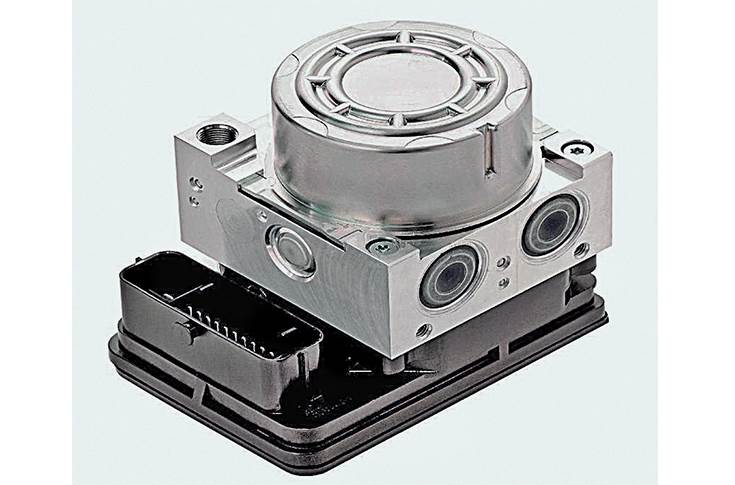 Mk100 ESC Base model. The company is hopeful about a mandate for Electronic Stability Control for PVs in India by 2022-23.

“While currently we have started with ABS which was driven by legislations, the next level, however, is going to be ESC and there are discussions going on as to how to open up the AEB (Autonomous Emergency Braking) market with ESC. So, essentially, we are moving towards the global megatrend of autonomous driving technology, where India will also eventually land up. But it is all going to be driven by regulations,” adds Kohli.

The ABC of an ABS plant
The modular (flexible capacity) ABS and ESC assembly lines at Manesar, with their completely digital footprints in terms of being connected to the cloud 24x7, see checks and balances being deployed to ensure a low failure rate of the final output. The plant operations are being handled through a customised SAP programme, and there is real-time information flow, which inhibits error by heavy usage of technology and automation. While the operators only supply parts to the station, the final assembly is automatically carried out by the individual station itself. Intensive use of vision and sensory technology-based Poka Yoke systems ensure that the discard rate in PPM is fairly low. 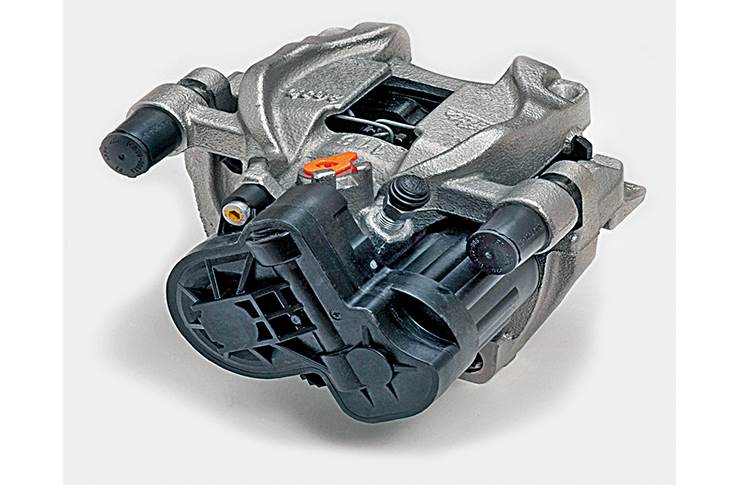 “We always talk about Industry 4.0 and within Continental we have ‘lead plants’ to do this. We have two lead plants in Europe which are implementing these contemporary technologies, and we can learn and replicate whatever suits the needs in our regional locations around the world,” explains Laudes.

“Apart from robots and cobots, many Industry 4.0 items are related to data — how to capture, analyse and utilise it — to improve the systems and processes. A part of that is already implemented here in Manesar and the next parts are about to come in,” he adds, taking us through the OHSAS 18001:2007 certified facility.

The plant has potential to become a global hub for Continental for ABS supply to two-wheelers, as well as a local hub for both ABS and ESC for PVs. The current installed capacity will suffice to cater to OEM demand over the next couple of years, when the company will have a better idea whether it needs to further expand its manufacturing capacity.

(This article was first published in the April 15, 2019 issue of Autocar Professional)