It has been a difficult year for Rane TRW Steering Systems, the 50:50 joint venture between the Rane Group and TRW Automotive. 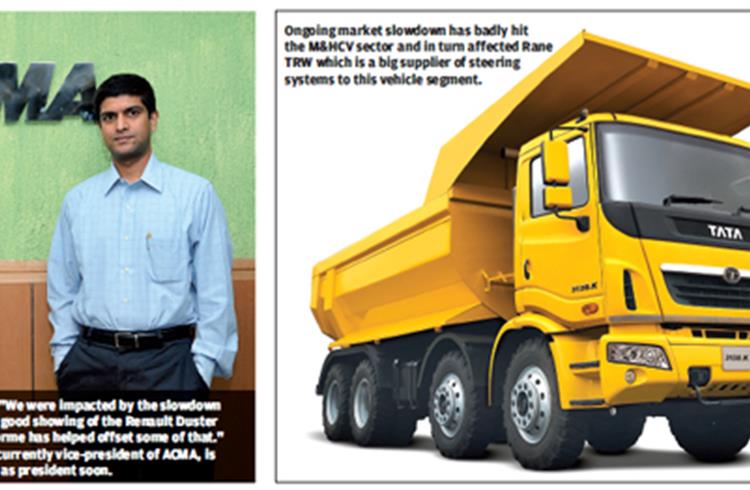 Expecting little or no growth in 2013-14, Rane TRW Steering Systems has set strict cost targets even as it prepares for a likely uptick by end-2013, says Brian de Souza.

It has been a difficult year for Rane TRW Steering Systems, the 50:50 joint venture between the Rane Group and TRW Automotive. The scenario wasn’t bad at the beginning of the fiscal, says managing director Harish Lakshman speaking to Autocar Professional at the Rane Corporate Park office in Chennai. “We had planned for 20 percent growth but things did not turn our way. Growth was flat and our core business was impacted,” he adds. Rane TRW, part of the Chennai-based Rane Group, is a major supplier of steering systems to the commercial vehicle sector, its largest exposure, and also to a host of passenger vehicle OEMs including Renault, Tata Motors, Fiat and Mahindra & Mahindra. The company also makes seatbelts using technology from TRW as well as airbags, its most recent business. Now as the company prepares for 2013-14, Lakshman, who is also currently vice-president of ACMA and slated to take over as president next month, says: “Our planning is based on low growth or no growth.” The reason for this are quite clear. The commercial vehicle sector is passing through its most difficult phase and that has affected Rane TRW. “Looking at our first quarter performance, I see no likelihood of growth later in the fiscal,” Lakshman says matter-of-factly. While there has been ‘surprising’ growth in the tractor segment in which Rane as a group has a substantial presence but not Rane TRW, all other sectors have shown no growth.

“We were impacted by the slowdown in the medium and heavy commercial vehicle sector to which we supply steering systems. With a 30 percent de-growth, that affected us as did the slow growth in the car sector. However, we were able to offset some of that thanks to the good showing of the Renault Duster and Tata Safari Storme,” says Lakshman. Lakshman says that the company remains bullish on the auto sector in general and so has made no changes in its planned capex expenditures. “We spent about Rs 50 crore last year and will spend in the region of Rs 25 crore this year. So we will be able to respond if there is an uptick in the sector.”

Lakshman outlines two key issues for Rane TRW. Capacity creation is one and the other is day-to-day cost management. “Long-term capacity creation is continuing. We are looking closely at how we can rationalise fixed costs and are looking at all ways possible to save money.” Rane TRW has also looked at rationalising initiatives in the HR department but Lakshman is quick to add that the company is not in panic mode. It uses a combination of permanent and contract staff and this mix depends on market demand. “We are not proactively reducing head count,” Lakshman reiterates. Indeed, given the bleak scenario, costs are the top priority in 2013-14. “We have met department as well as functional heads and set them stringent cost targets. This has all been planned and mentally, we are more comfortable compared to last year,” he says.

While things have been subdued on the business front, one noteworthy development in the last fiscal was the company’s foray into the manufacture of airbags. Lakshman says the entry is premised on the future prospects of business. Thanks to its decade-long technology tie-up with TRW for seatbelts, the company will leverage TRW’s technology for airbags. Rane TRW has set up a separate line at its Maraimalainagar plant near Chennai. At present, the airbags are being shipped directly from TRW’s Germany plant to India customers. However, come September, this will change. “We have a localisation plan over the next two years. We have two customers including Mahindra and Ford India. We start with Mahindra & Mahindra and a little later to the FordEcoSport.” In India, airbags are, as of now, not mandated by law. However, as Lakshman puts it, “All other markets, including China, mandate airbags. I believe it is only a matter of time before India passes legislation regarding this.”

Today, airbag penetration in cars in India is just 10 percent and this is typically available in the Rs 9-10 lakh price segment. "With increasing safety awareness, this is a product that will be become necessary and this is a market opportunity. We have internal targets but all depends on what the government does,” he adds. Duster's brisk business

On the export front, Rane TRW has been supplying steering systems for the Renault Duster platform worldwide even before the Duster was launched in India last year. “We supply steerings to Renault’s plant in Romania and have begun supplying to Brazil and Colombia where the Duster is getting assembled. We will then look at the Russian market as well. That apart, we do have small numbers for TRW as well,” says Lakshman. Given the slowdown and the weakening rupee, Rane TRW is keenly aware of the challenges that lie ahead. Lakshman is of the opinion that while the rains will have a positive impact on the tractor market, it is not possible at this juncture to say what impact it could have for CVs.

On other fronts, Rane TRW has had its own issues with handling requirements for power at its facilities. “We make all our products here, so it is an important concern,” he says. “We do have an issue with availability of power. There is a supply-demand gap. Power projects have a long gestation period, so we cannot expect to get power overnight. We have not set up enough plants and we are paying the price. Some projects are underway and things should improve in two years or so.” Yes, there is a cost hit and having said that Rane TRW is trying to optimise. “At plant level, we are trying to lower unit consumption. Between loading and unloading a part, we can switch off power so we installed sensors that handle this. This is taking place across all our plants. We are looking at all ways to plug power consumption.” Rane TRW, which is trying to optimise the mix of power sources, draws power from the government, purchases it from third party sources, uses wind power and finally diesel power generation. It tries to optimise these four sources. The plant engineering tries to focus on this on a day-to-day basis.

“Our power costs have gone up by over 20 percent and it is something we are trying to manage,” says Lakshman. In a down market, this is a challenge, he adds. In Trichy, where Rane TRW has one of its largest plants, the power situation is worse. On other fronts, hiring and retaining remain a constant issue. Rane TRW tends to hire more from Tamil Nadu but Lakshman admits there is a struggle to get high-quality talent. As far as Gujarat goes, Lakshman says that as a group, Rane is looking at Gujarat but not for Rane-TRW alone. The company has created capacities in two of its Tamil Nadu plants and has made investments in Uttaranchal for both seatbelts and steering systems.