Varroc Lighting Systems (VLS), which stands as the largest contributor (nearly 45 percent) to the revenues of the Indian automotive component major, Varroc Group, is eyeing the number three position globally in the burgeoning automotive lighting solutions’ business by 2020. 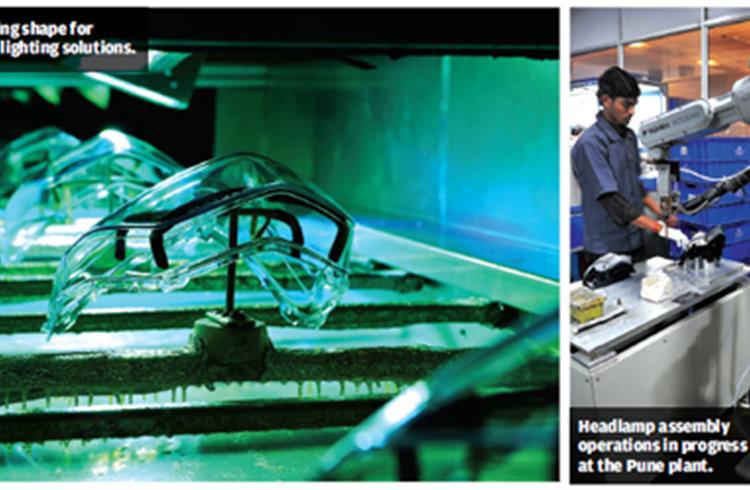 Varroc Lighting Systems (VLS), which stands as the largest contributor (nearly 45 percent) to the revenues of the Indian automotive component major, Varroc Group, is eyeing the number three position globally in the burgeoning automotive lighting solutions’ business by 2020.

In his first-ever conversation with any Indian media, the Michigan-based Jeff Stevenson, who is the president of Varroc’s global lighting business, told Autocar Professional that “our vision is to be one of the top three exterior lighting suppliers in the global automotive market by 2020. We are at number six in the global market and our vision of growing to number three is a challenging task. We plan to achieve that through organic and inorganic growth, providing the best customer service quality delivery and cost-effective innovative products.”

The tricky exterior lighting business, which is usually policy regulated in most nations in terms of light output, brake lights, low/high beams and other parameters, consists of fierce competition between the companies who work towards innovation and new technologies to address the regulatory requirements.

Stevenson, who prior to Varroc's acquisition of Visteon's exterior lighting division in 2012, was working with the latter as general manager for global lighting business, says: "What distinguishes companies from one another in the automotive lighting business is the execution of features.” To fuel growth and drive profitability, VLS is working on a bunch of global vehicle platforms being developed by OEMs (design/feature commonalities saving costs) applicable to vehicles sold in more than one country.

According to Stevenson, business (involving production of common products for more than one country) coming from various global vehicle platforms being designed and developed by OEMs across the world stands at nearly 40 percent of the total revenues of VLS in current times. The company is working on a couple of global vehicle programs such as the Volkswagen Polo meant for the Indian as well as European markets, Ford Motor’s Focus and Fiesta vehicle programs, platforms under development at Jaguar and Land Rover (JLR), PSA Peugeot (not for the Indian market) and General Motors, which is working on a common vehicle platform for the South American and Indian markets, to name a few.

“Global programs are a significant portion of our businesses today. We are involved in a lot of projects associated with the global platforms developed currently. For us, lighting designs are very similar, if not identical. That is one reason why we are looking at strengthening our manufacturing footprint across the globe because our customers would prefer to source from that supplier which is capable of supplying in every region,” adds Stevenson.

Substantiating Varroc’s widespread footprint across the globe, he highlights that “when you take a look at Varroc’s footprint, you will see that we are present in many emerging markets. We just opened our third operation in China (through a JV with TYC). We see considerable growth in China and the reason why we opened our operations there is to be close to our customers. Our lighting products are rather large and they don’t ship well. So to take some of the non-value factors out of the equation, we are trying to position ourselves closer to our customers.”

Role of emerging economies and the strategy for India

VLS is following a strategy of designing and developing products in the regions where it manufactures them. The lighting major has key design centres in India, China, Mexico and the Czech Republic along with engineering centres in North America, Germany and France.

The company is actively working to pursue opportunities in Brazil and Russia. While Autocar Professional is aware that the company has plans to set up a plant at an undisclosed location in Russia, Stevenson confirms that “we are yet to take a decision on that.” However, according to him, the Czech Republic is the largest contributor to VLS’ global operations where technology development and advanced engineering operations are predominantly carried out at VLS’ main technical centre in NovyJicin.

Defining the India-specific strategy, Stevenson candidly says that “the growth strategy for VLS in India is predicated on supporting our key regional customers, as well as supporting the growth and expansion of our global customers. The plan is to bring style and technology to the region, while customised for the Indian market. While the R&D team in India is accountable for the design and development of products produced in India, I find the team to be self-sufficient. We do provide them incremental support in the form of advanced engineering and advanced technologies. We are very closely watching the growth of our customers in specific regions such as Gujarat and we are working to provide our solutions there.”

Identifying Tata Motors and Mahindra & Mahindra as the two local players which are advancing with modern lighting technologies, he points out that “the Mahindra XUV500 is a great example where the company has tried to improve the aesthetics of the vehicle via using LEDs and the daytime running lamps and other features.” Interestingly, the company also supplies lighting solutions to the Tata Nano.

Though Stevenson has not been following up on the two-wheeler business front, he reveals that going forward, there will be more synergies between the four-wheeler and two-wheeler lighting divisions in terms of sharing the technologies, cost- effective manufacturing processes and enhancement of product lines.

With a two-point focus of boosting the two-wheeler lighting business, Amit Dakshini, chief strategy officer, Varroc Group, explains that the firm is working to bag orders domestically and is also eyeing growth in South East Asia region. While Bajaj Auto is the biggest customer for Varroc’s two-wheeler lighting business in India (and the firm is in advanced talks with Honda Motorcycle & Scooter India currently), the company is eyeing business from Triom’s clients in this region. TriomSpA (the Italian lighting major acquired by Varroc in early 2012) has prestigious clients like Piaggio, Honda, Yamaha and Ducati in its kitty and majorly supplies to the two-wheelers sold in European markets.

“Triom has a presence in Vietnam and we have identified Indonesia as a high-growth market. We plan to boost our two- wheeler lighting business in the South East Asian region,” says Dakshini.

In another development which may soon result into an extension of OEM-supplier equation, the upcoming Vespa 946 (intended to be a CBU for India) will sport the lighting systems from Triom. To understand the technological capabilities of this company, it may be noted that the Vespa 946 is the world’s first scooter which sports a complete LED exterior lighting system.

Throwing light on the possibility of bagging orders for Vespa scooters from Piaggio locally, Dakshini says “while we are currently not working with Piaggio in India, but we are hopefull that we will work with them on the future models.”

On a similar note, the company is open to exploring possibilities of bagging business orders from Ducati’s operations in Thailand, leveraging Triom’s Italian link with the iconic bike maker.

While Stevenson underlines that exterior lighting is considered to be the jewellery of a vehicle in some countries, he understands that OEMs are willing to provide slick features to these solutions which leads to innovations.

“Within lighting, a lot of innovation is going on the electronics side, introduction of LEDs (head- and rear lamps) provide increased visibility, driving experience and enhances the overall aesthetics of the vehicle. The other solution to watch out for is organic LEDs (OLEDs). But these are not cost- effective and production-ready for the market at this time,” he says.

Talking about cost pressures, Stevenson points out at some active internal programs wherein the company mulls over reducing costs and prices which also includes cost-effective designs, common architecture for designing and developing products and other measures. He says the overall market is growing at 3-3.5 percent worldwide against which VLS is growing at 8-10 percent growth associated with both, the market and the buying trends of the OEMs. He anticipates incremental growth (in double-digits) this year as well.

“We are seeing the NAFTA region (North American Free Trade Agreement, Canada-US-Mexico) rebounding very well and some further growth in the US. Europe is a different story as of now. We believe that we are seeing the bottom of the market and we are expecting to see a rebound in the second half of this calendar year and further strengthening in the 2014. In India, the market has been considerably low; our volumes are down over what was earlier projected. We are hoping that it is going to rebound a bit this year and getting back to the normal growth patterns starting next year,” he sums up.